Home » Guides » Amazon Fire TV vs Fire Stick: Which One Should You Buy? 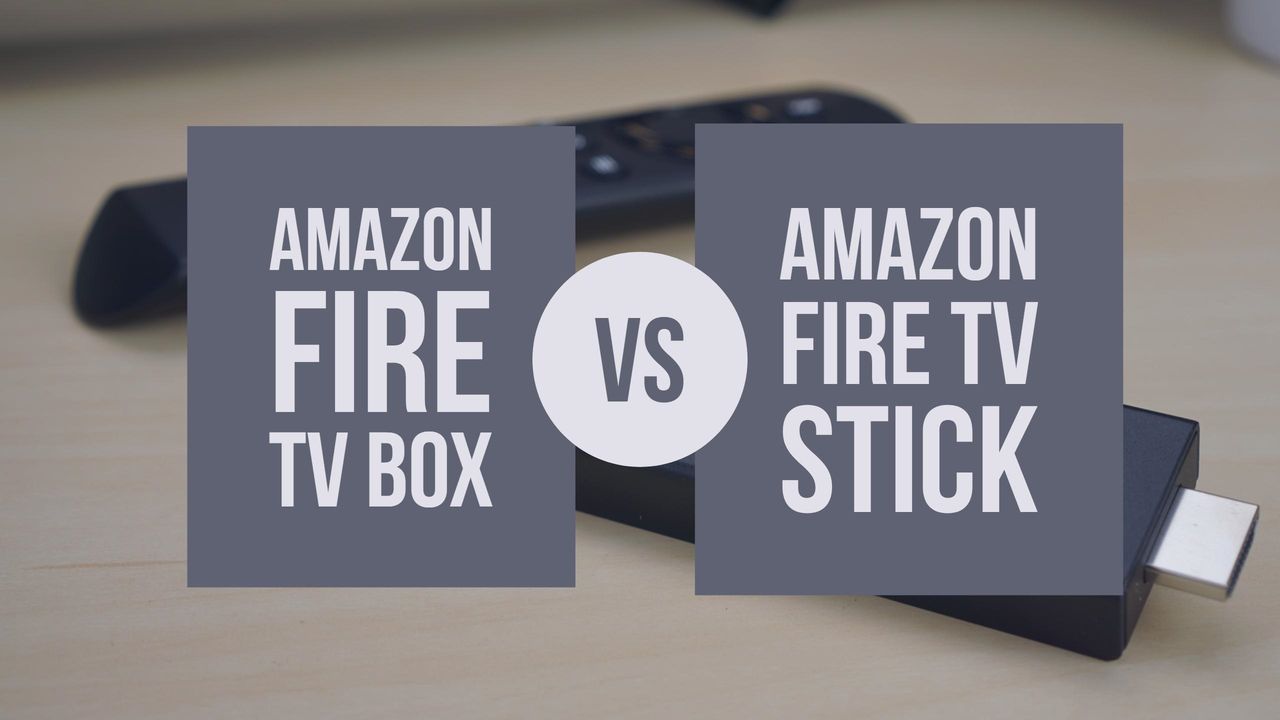 It’s not exactly surprising that people are trying to choose between the Amazon Fire TV vs Fire Stick.

The streaming devices are tightly integrated into Amazon services including Prime Video and also allow users to access a wide range of other services, apps and games. Backed by Artificial Intelligence, Amazon Fire TV devices recommend movies, TV shows, apps and more to users based on their usage history and personal preferences.

Just like other streaming devices such as Android TV boxes, the Amazon Fire TV and Fire Stick stream content from the internet and displays it on your TV in High Definition (and UHD for those with 4K TVs).

You can even install Kodi on your Firestick or Fire TV to transform it into an even-more powerful component of your home theatre setup. However, fans of Amazon’s ecosystem often end up confused when they have to choose between the two available TV streaming devices.

When deciding between the Amazon Fire TV vs Fire Stick, there’s a number of important differences between the Firestick and Fire TV that you’ll need to take into account.

The Amazon Fire TV Box is targeted at users who don’t want to compromise on internals and performance, stream 4K content and want the best Amazon Fire TV experience.

However, the Amazon Fire TV Stick aims to deliver great value while offering most of the features of Fire TV Box.

Let’s have a look at some of the key differences between the Firestick and Fire TV box.

When comparing the Fire TV vs Fire TV Stick, there’s a significant gap in performance thanks to the drastically different hardware under the hood.

Although both devices come with a quadcore GPU, the real-world performance difference is noticeable, especially when it comes to gaming. The Fire TV Box also comes with double the ram than TV Stick (2GB vs. 1GB), which means better multitasking and less lag.

The Amazon Fire TV Stick works just fine if you mostly watch 1080p content or play light games, but if 4K videos and more serious gaming is your thing, then the Amazon Fire TV Box is the way to go.

The Fire TV box feels more responsive and switches between apps smoothly, while the TV Stick may lag if you put too much strain on its CPU/GPU.

Depending on the actual tasks, the Fire TV Box launches apps in almost half the time and also boots up/shuts down faster.

However, this doesn’t mean the Fire Stick cannot run things smoothly as it still performs reasonably well if you are not into running too many apps at once. There is still much to like about the TV Stick when you consider the price difference between the two.

When it comes to Fire TV vs Fire Stick performance, the Amazon Fire TV box’s improved specs help it win this round. Display output and connectivity is where the differences between the Fire Stick and Fire TV become more noticeable.

The Amazon TV Stick only allows you to stream content in Full HD (1080p), while the Fire TV Box also supports Ultra HD 4K content. 1080p is a good-enough resolution for TVs with 32-inch or below screen size. But you may want 4K for sharper and more detailed images if you’ve a large-screen 4K TV and 4K content (or have a speedy internet connection to stream 4K video).

Both devices can connect to a TV through HDMI interface, but the way they connect is different.

The Fire TV Box connects through an HDMI cable and requires a power adaptor, while one end of Fire TV Stick plugs directly into the TV’s HDMI port and the other end connects to a USB port for power. This makes the Fire Stick ideal for wall-mounted TVs and helps save previous space.

Speaking of connectivity, the Amazon Fire TV Stick connects to the internet through Wi-Fi and uses Bluetooth for connecting with the remote and optional Bluetooth controller. The Amazon Fire TV Box adds Ethernet, USB and Digital Audio ports and an external storage slot (up to 128 GB). The Fire TV Box is arguably a better option if you are not limited by your budget and want the best of what Amazon has to offer (still at a reasonable and affordable price).

Amazon Fire TV vs Fire Stick: Is the Fire TV better than the Firestick?

Thanks to its more powerful hardware and larger footprint, the Amazon Fire TV offers significantly better performance across the board, including faster boot times, better gaming performance and more.

However, all this power comes at a price and this makes the Amazon Fire TV significantly more expensive than the very affordable Amazon Fire Stick. The Amazon Fire TV and Xiaomi Mi box are similarly priced Android-based media players that differ in a number of key areas.

The Xiaomi Mi Box is an incredibly popular streaming media player powered by the quadcore Amlogic S905 processor and runs Android TV – Google’s TV-friendly version of their smartphone operating system. This gives the Mi Box access to a larger library of apps, including Kodi.

In terms of specs, both devices feature wireless AC, Bluetooth 4.0+, 2GB of RAM and 8GB of storage. However, the Fire TV box has the ability to expand this using its built-in microSD card slot unlike Xiaomi’s device.

Like the Amazon Fire TV Box, it’s capable of 4K video output and HD Netflix streaming, though support for Amazon Prime video is nowhere near as good as you’d expect.

Both devices made my Best Android TV box list, though each has their strengths and weaknesses. If you’re looking for a basic streaming media player, the Roku is an excellent choice thanks to its TV-friendly interface built from the ground up to be used on the big screen.

It offers support for an impressive 2500+ streaming services including Netflix and Amazon Prime, 4K video and fast wireless AC for a very affordable price.

That said, as it’s only designed as a streaming media player, you don’t get access to many of the powerful features of the Amazon Fire TV such as gaming, the ability to install Android-based apps such as Kodi and more.

Amazon Fire TV vs Fire Stick: Which One Should You Buy? Now that you know the key differences between the Fire TV Stick vs the Fire TV, you need to ask yourself which Fire TV device should you buy.

If you are not limited by your budget, want more raw power, connectivity options and expandable storage, than the Fire TV Box is an easy choice. It’s also kind of a must if you own a 4K TV and are connected to the internet through a stable and speedy connection (preferably using the Ethernet). The Box loads apps noticeably quicker and allows you to play demanding games with decent frame rates. Faster boot up and shutdown times mean less waiting while quicker loading and smoother switching between apps means you can do more in less time.

The Amazon Fire TV Stick is a better option for people who just want the basic functionality and an easier device setup at an affordable price.  The Stick works quite well if you own a 1080p TV and prefer using a dedicated gaming console for ‘proper’ gaming. At almost half the price, Amazon TV Stick still manages to offer most of the basic functions and allows you to enjoy your favorite content and apps.

Both Amazon Fire TV devices offer great value for the money and the Amazon Fire TV Box vs Fire Stick battle is more about your individual requirements.

Considering that fact that the Fire TV Box is available at a not-so-expensive price, it’s hard to ignore the performance and connectivity advantages it offers. Even if you don’t yet own a 4K TV and are not planning to play graphic intensive games, the Fire TV Box is still the recommended option as it future-proofs your investment and offers a better user experience. There are also many apps that only support Amazon Fire TV Box or don’t work well on the Fire Stick due to higher performance requirements.

That said, people who already have other devices on their A/V rack and want a compact device to enjoy content from Amazon would find the Fire TV Stick a reliable option. It offers a lot of value for the money whilst allowing you to do most of the stuff you can do on the Fire TV Box.

Is Kodi Legal? Here’s Everything You Need to Know

How to Install a VPN on a Firestick Without Root