The Beelink S1 is a new Windows Mini PC from the company with some pretty interesting specs including up to 8GB of RAM and a built-in microphone for accessing Cortana – Microsoft’s virtual assistant.

That microphone is definitely a unique feature, allowing you to easily use Cortana to search the web, schedule meetings and more without needing to pick up a separate microphone.

The rest of the specs are pretty decent. The Beelink S1 is powered by the quadcore Intel N3450 and features up to 8GB of RAM, 64GB of onboard storage, dual band wireless AC, Gigabit Ethernet and Bluetooth 4.0.

There’s also an M.2 slot and 2.5″ SATA bay located underneath the unit, allowing you to significantly expand the onboard storage. Both VGA and HDMI connections make an appearance so dual monitor configurations may be possible, though this hasn’t been confirmed by Beelink.

I’m really glad to see front mounted USB 3.0 ports, as well as a USB Type-C port (though no word on what it can be used for as yet as these ports don’t always support every USB Type-C feature).

There’s no word as to whether a Windows licence is included, but the system does come with System Activation instructions (whatever that means).

If you’re wanting to pick one up, you can buy the Beelink S1 from GearBest starting at $219.

Use coupons GBS14 and GBS18 to save $20 on the 4GB and 8GB versions respectively. 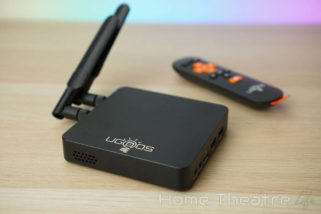