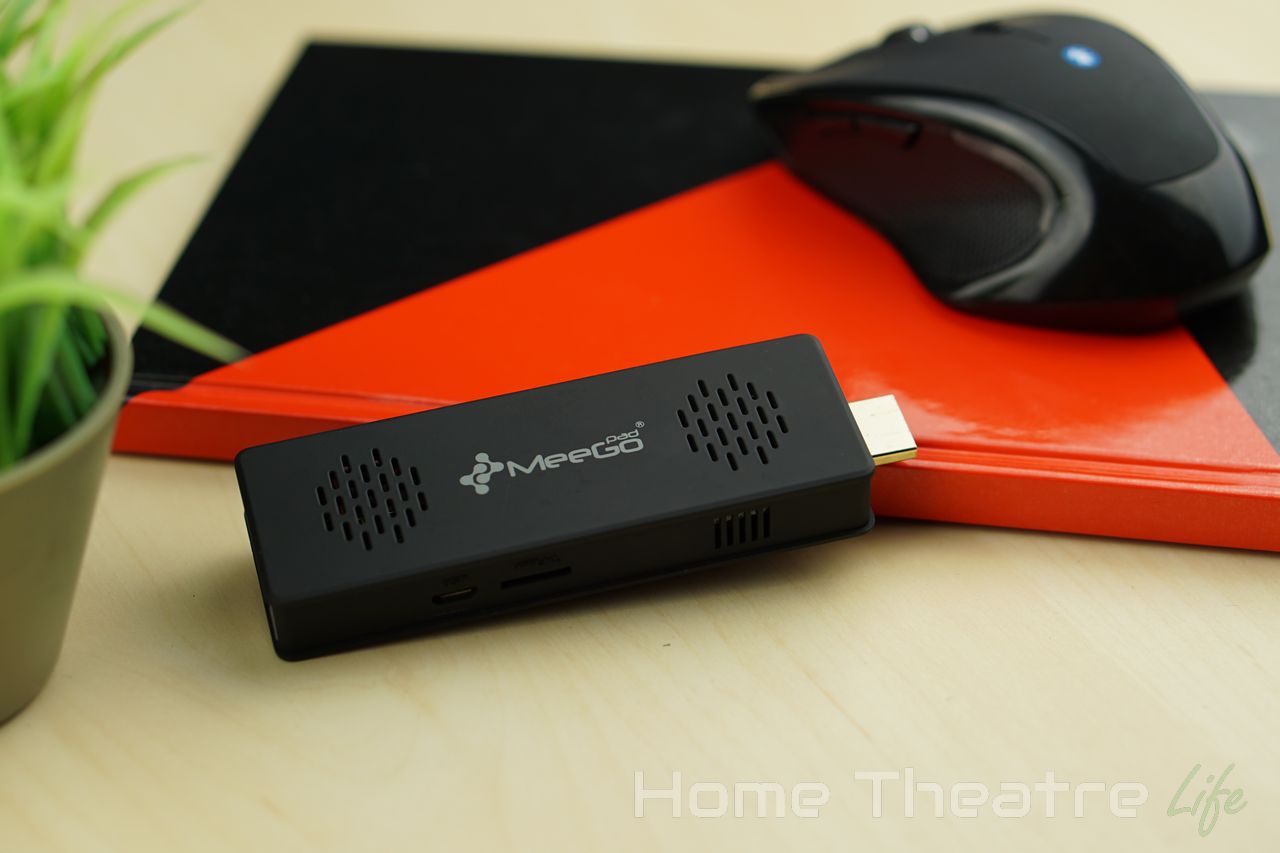 The MeeGoPad T03 Pro is The gadget makers latest Windows stick PC. It’s powered by the Quadcore Intel Cherry Trail X5-Z8300 process and features 2Gb ram, 32Gb of onboard storage and b/g/n wifi – all in a compact shell. Is it any good? Read our MeeGoPad T03 Pro review to find out 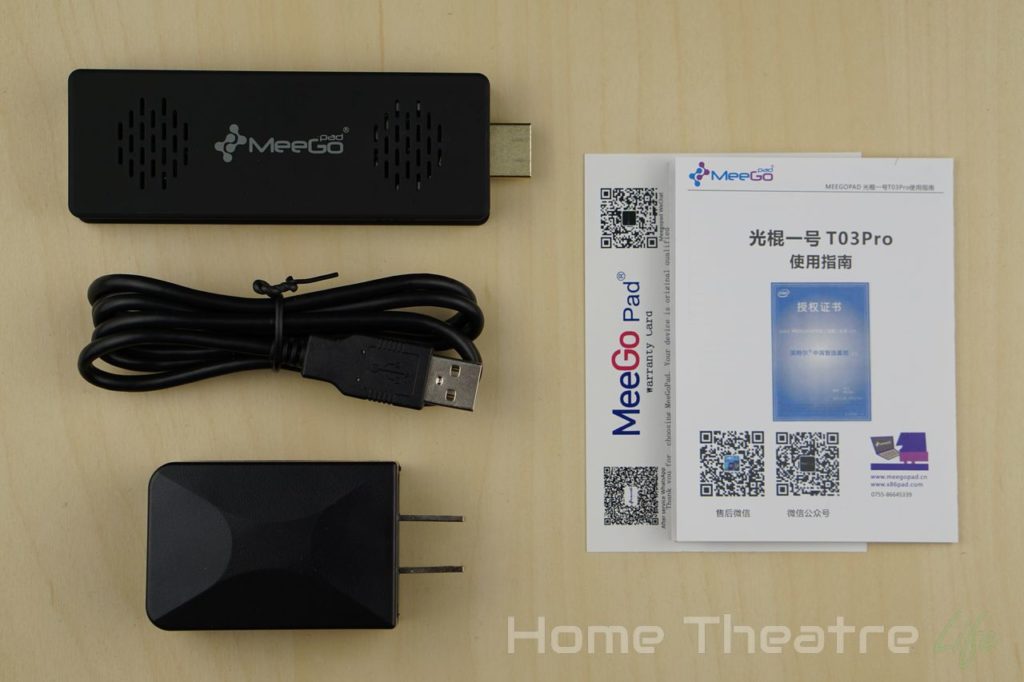 MeeGoPad have included the basics to get connected:

Given that the MeeGoPad T03 Pro uses micro USB ports to save on space, I wish MeeGoPad included a USB OTG adapter in the box. I’d recommend you pick up one like this. The design is relatively minimalist design, with MeeGoPad branding on the top and ventilation on the bottom. The whole device is covered in a black rubber-like coating that feels nice and makes it easy to grip when you need to unplug it from your TV.

To maximize the available space , ports are located all over the unit. The right side houses a micro USB 2.0 port and a micro SD card slot. 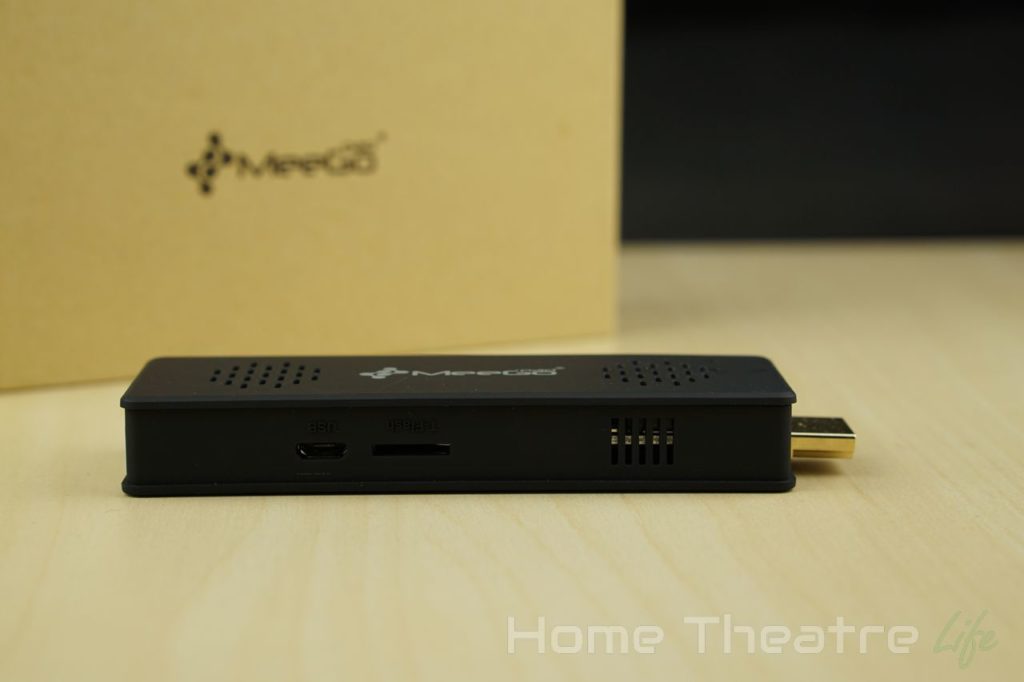 The left side features a power button, another micro USB 2.0 port and a fullsize USB 3.0 port. A male HDMI plug is integrated into the unit, so you don’t need a HDMI cable. But you may need a HDMI extension cable depending on how much clearance you have around your TV’s HDMI ports. 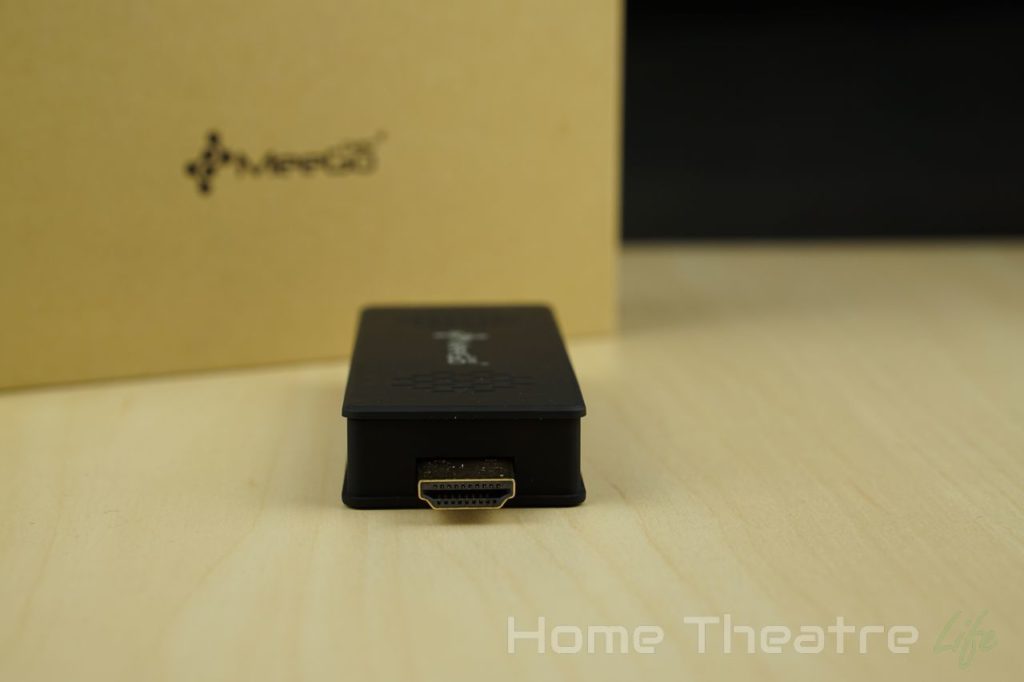 Given that the MeeGoPad T03 Pro only has a single fullsize USB port, you’ll either need to invest in Bluetooth peripherals or get a couple of USB OTG cables to be able to use all the ports which is a bit of a pain. It can also get a bit messy with everything connected. 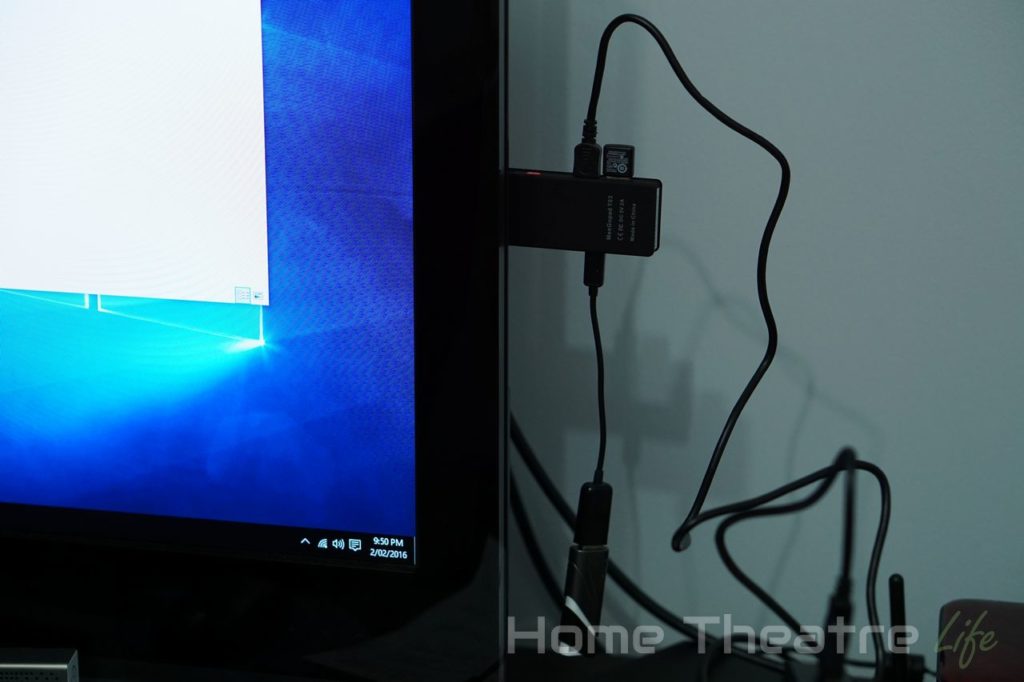 The fan hidden under the top vent does a solid job keeping the unit cool (more on that in the Thermal Performance section) but it’s fairly audible. You won’t hear it if there’s background noise but during silence, its high-pitched whirring can be annoying.

Pressing the power button will cause the unit to boot. It takes around 20 seconds for a cold boot with a USB keyboard and mouse connected.

The unit ships with Windows 10 64-bit Home. There’s not much to say here except that it’s stock and comes activated. Out of the box, there’s a single C: drive with 20.7GB out of 28.2GB free. I did have an issue where the Windows Store was missing. I had to use the Windows Media Creation Tool to reinstall Windows 10 to get it back after a few common tips failed. All is working now however and I’m not sure if the issue was limited to my unit or the device more broadly.

Intel’s Cherry Trail processor does a great job with Windows. I didn’t experience any noticeable issues during testing. Multitasking performance is decent as with most of these devices. Opening a few web pages in Chrome whilst watching a movie was fine. Media playback on the MeeGoPad T03 Pro was good, with only 4K 60fps and 1080p Hi10p tripping the device up as expected, given the lack of hardware decoding for these formats.

Deinterlacing performance was good as with other Cherry Trail devices.

Netflix was able to be played back in 1080p without any issues via the native a Windows 10 app.

I was able to play back media from both my USB flash drive and USB-powered 2.5″ HDD without any issues. Gaming performance was great. At 1080p, both Jetpack Joyride and Beach Buggy Racing were smooth at maximum settings. 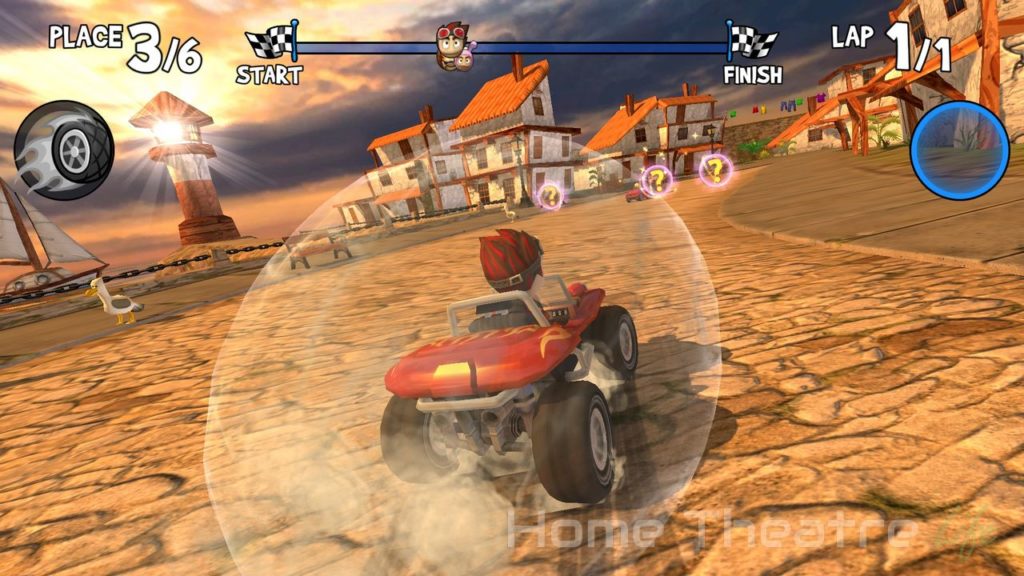 Bluetooth worked fine. I was able to pair up my iPazzPort Bluetooth keyboard without any issues.

I was able to connect up my Tronsmart Mars G01 and have it recognised as an Xbox 360 controller. Playing Beach Buggy Racing was fine. Wireless network speeds were average. Upload and download speeds were 22.1Mb/s and 33.6Mb/s respectively on the 2.4GHz band.

Interestingly, real world testing of wireless performance was far better than the numbers suggest. 1080p and 4K samples streamed fine from my NFS share via WiFi without any noticeable buffering. The thermal performance of the MeeGoPad T03 Pro is great. The device is actively cooled via a small fan and it’s clear that the fan is doing it’s job. After 30 minutes of stress testing via HeavyLoad, the MeeGoPad T03 Pro capped out at 68°C according to HWiNFO without any throttling. Ambient temperature was 20.7°C.

This makes it one of the cooler mini PC’s I’ve tested to date. 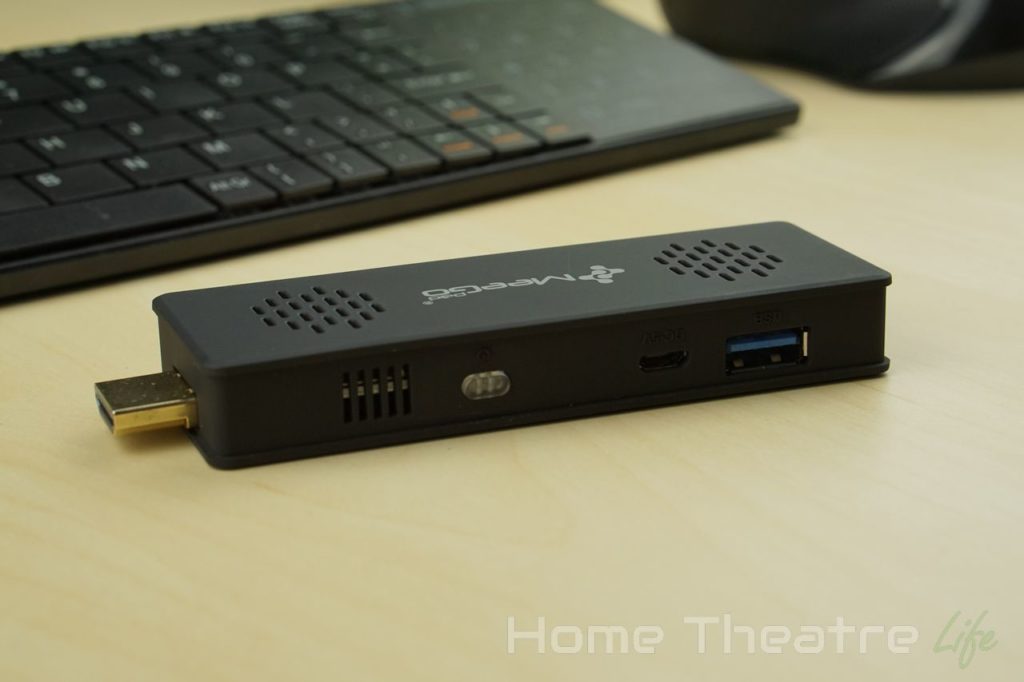 The MeeGoPad T03 Pro is an interesting device and one that has me conflicted. On on hand, it’s incredibly compact and performs as well as far larger Windows boxes. However, the lack of ports and constantly whirring fan are a frustrating and really detract from the device’s usability.

That being said, if you’re in need of a tiny Windows PC with some graphical power, the MeeGoPad T03 is a reasonable choice as long as you can overlook its limitations.

The MeeGoPad T03 is available from GearBest for around $105.

MeeGoPad T03 Pro
The MeeGoPad T03 Pro matches its bigger brethren in performance. However, the lack of USB ports and constant fan noise detracts from the overall package.
Pros
Cons
6.8