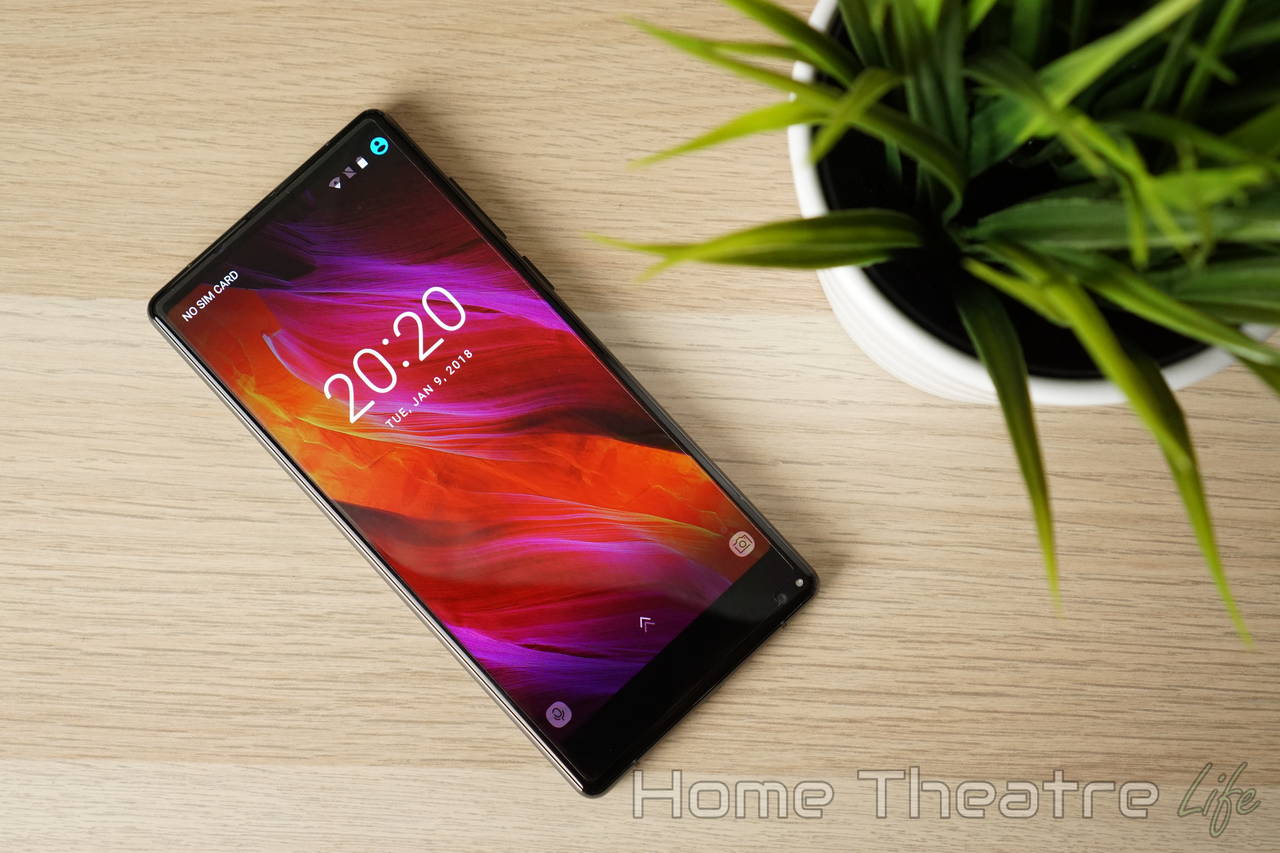 Bezel-less smartphones have exploded in popularity since the release of the well-received Xiaomi Mi Mix. Oukitel has followed the recent release of the Xiaomi Mi Mix 2 with their own version also called the Mix 2. Is it worth it? Keep reading my Oukitel Mix 2 Review review to find out.

What is the Oukitel Mix 2?

The Oukitel Mix 2 is a bezel-less-style smartphone offering flagship-like specs at a fraction of the cost.

The whole thing is powered by the octacore MediaTek Helio P25 (MTK6757V) which offers plenty of performance for daily use as well as gaming.

Where to Buy the Oukitel Mix 2

The Oukitel Mix 2 is available from GearBest for $199 with free shipping for a limited time only.

Oukitel definitely know how to pack a box, offering a whole heap of excellent inclusions:

I really like that fact that Oukitel included both a case and a factory-applied screen protector in the box. It’s nice knowing that my phone’s protected and it’s something other smartphone companies should start doing.

The Oukitel Mix 2 is a great looking phone. Its frame features glass on the front and back. It feels nice to hold, though I found it slippery at times – the same problem I’ve had with other glass-coated phones like the Samsung Galaxy S8. It seems to do a good job resisting scratches but I wouldn’t want to drop it. 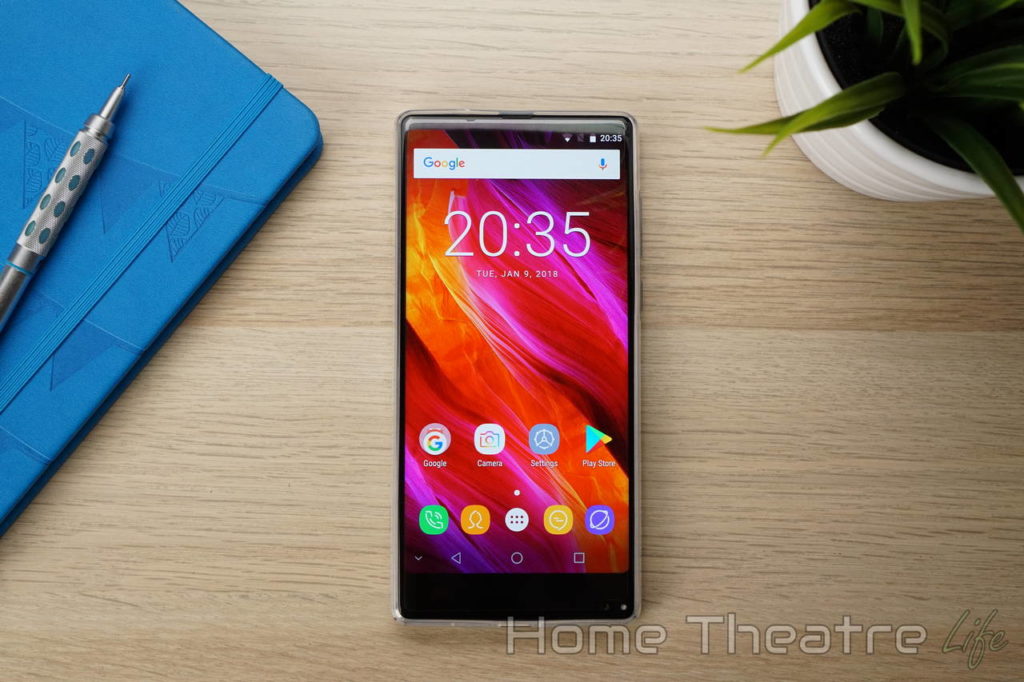 The front of the phone is dominated by the massive 5.99” LTPS touchscreen. The 2160×1080 pixel display makes colors pop with excellent sharpness. It’s not quite bezel-less, but the small 1mm border around the screen and narrow chins don’t really detract from the effect. These chins are unavoidable however, housing a few sensors, speakers and more.

There’s also a front facing camera here, though on the bottom of the unit. I’m sure it was done to fit everything on the front, but its odd and has some definite drawbacks (more on that later).

Flipping the phone over to the back shows off its dual cameras, a small LED flash and the fingerprint sensor. The fingerprint sensor is accurate and reasonably fast. It’s not as quick as the one on the Google Pixel 2 but the difference in practice is small. 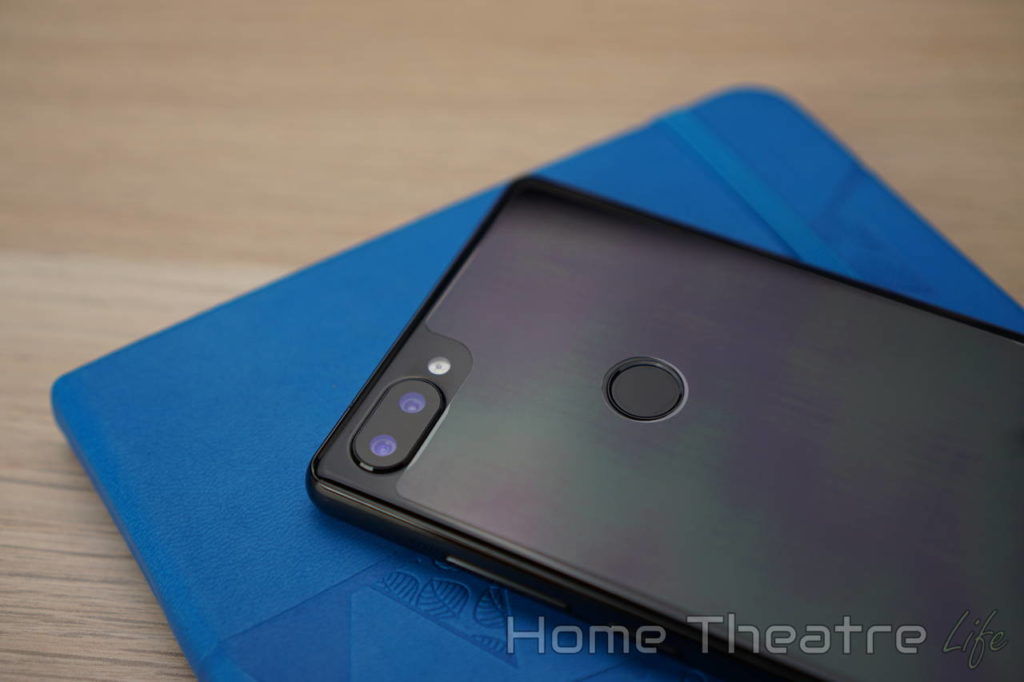 A hybrid sim card/micro SD card slot is on the left, volume rocker and power buttons on the right and even a 3.5mm headphone jack at the top of the unit (which I love – even if everyone seems to be trying to kill it).

There’s also speakers and a micro USB port at the bottom of the phone for charging. It’s disappointing that we don’t have USB type-C but whatever. The port is also seems to be slightly deeper than normal so I had issues plugging in some of my micro USB cables which was frustrating.

Thankfully, charging isn’t too painful thanks to the phone’s massive 4080mAh battery. Obviously, that big screen needs plenty of juice but it still gave me two days of moderate usage without issue. It supports fast charging too so you’ll get a full charge is just 90 mins – perfect when you need a top up before you head out.

The Oukitel Mix 2 thankfully ships with a relatively stock version of Android 7.0 Nougat. Oukitel have kept the customizations to the launcher and OS to a minimum which is welcome as many manufacturers tend to load bloated skins that hurt performance (Samsung – I’m looking at you!) which is great. 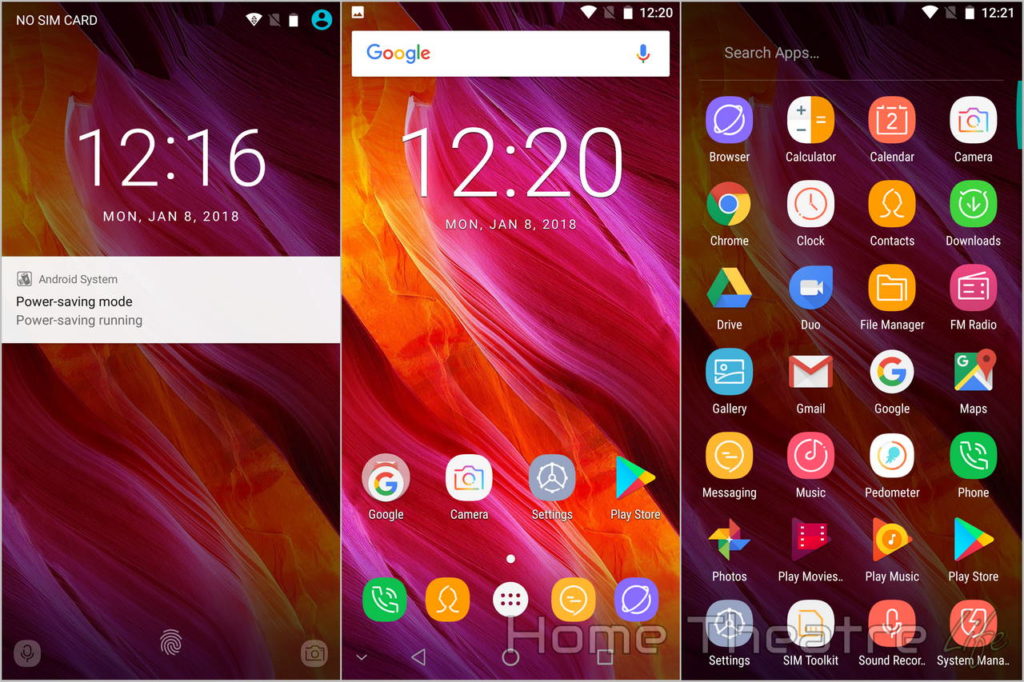 What customisation is here is pretty handy (if a little limited). You can enable gestures such as drawing a C to unlock your phone and automatically open the dialer, ignore a call by flipping the phone and more. Unfortunately, these are pre-defined so you can’t actually remap the gestures which feels like a missed opportunity.

There’s a few pre-installed apps such as a system manager (for cleaning storage, managing battery, etc), an emoji keyboard and a pedometer app. Of course, you can install your favorite apps and games via the Google Play store. 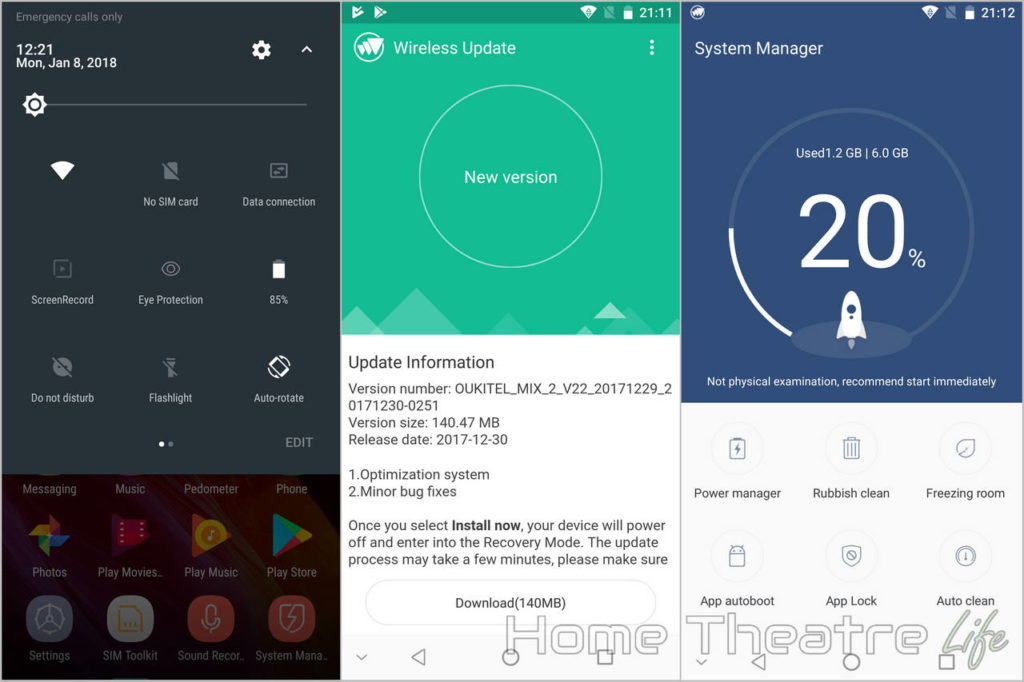 The OS itself feels snappy and I didn’t have any crashes or hanging aside from the usual Android quirks.

The Oukitel Mix 2’s camera specs are impressive on paper but are mid-range in practice.

The dual camera setup has a 16MP rear camera (upscaled via software to 21MP for some reason) with an f2.0 lens and a secondary 0.3MP camera for depth perception. This is used in the phone’s bokeh mode for blurred backgrounds ( more on that in a sec).

As long as lighting is good, the image quality on the Oukitel Mix 2 is pretty solid with good detail (though a little over-saturated).

The f2.0 lens definitely helps in low light situations but I still found images to be overly noisy or lack sharpness compared to cameras seen on high-end smartphones like the iPhone X, Google Pixel or Galaxy S8. The second camera is used in the camera’s bokeh mode. This tries to replicate the blurred backgrounds you get with a DSLR camera. However, the effect falls flat in practice. It’s clear that the depth camera does have some effect (as blocking it eliminates the blur) but the blur is circular which just looks unnatural.

The 8MP selfie camera (upscaled to 13MP) does a decent job but, as before, doesn’t hold a candle to the pricier flagships. I also found having to remember to flip the phone to take a selfie was frustrating as I often copped an unflattering angle when switching to the front camera.

4K video recording is supported to though it’s subject to the same mid-range performance as the rest of the Oukitel Mix 2’s camera performance. 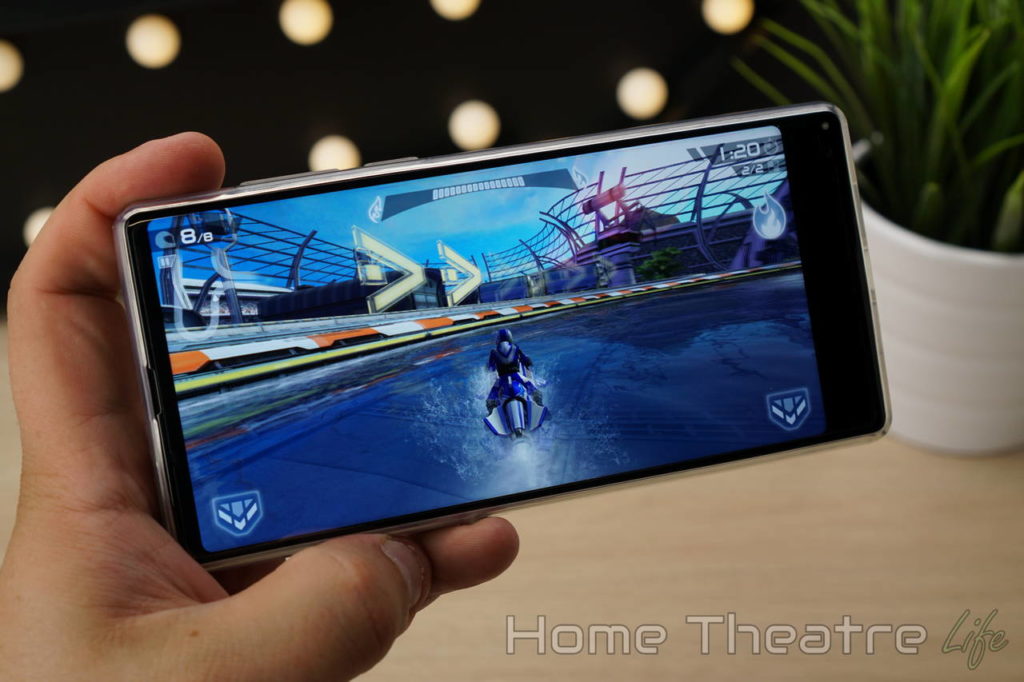 Gaming on the Mix 2 was a fantastic experience, with the phone’s Mali-T880 offering plenty of grunt for the most demanding smartphone games.

Games like Riptide GP2 remained buttery smooth, even when maxed out so gamers won’t be disappointed.

Should You Buy the Oukitel Mix 2? The Oukitel Mix 2 offers impressive specs for a very reasonable price. Getting an octacore Helio P25 processor, 6GB of RAM, 64GB of storage and a massive 5.99″ Fulll HD+ screen for under $200 is excellent value.

The only real letdown is the cameras, though this seems to be biggest weakness of most budget smartphones.

Whilst it won’t keep up with the likes of phones such as the Samsung Galaxy S8 or Google Pixel 2, it’s a fraction of the cost yet offers impressive performance. If you’re wanting a brand new phone, I’d recommend taking a look at the Oukitel Mix 2.

Where to Buy the Oukitel Mix 2

The Oukitel Mix 2 is available from GearBest for $199 with free shipping for a limited time only.

*GearBest provided a sample to provide an unbiased review. This did not influence our review in any way.

Best Air Mouse 2018: Get the Best Remote for Android TV Boxes and HTPCs