I want to say thanks to GeekBuying for sending me a sample of the Tronsmart Pavo M9 to review. Click here to view the latest price. 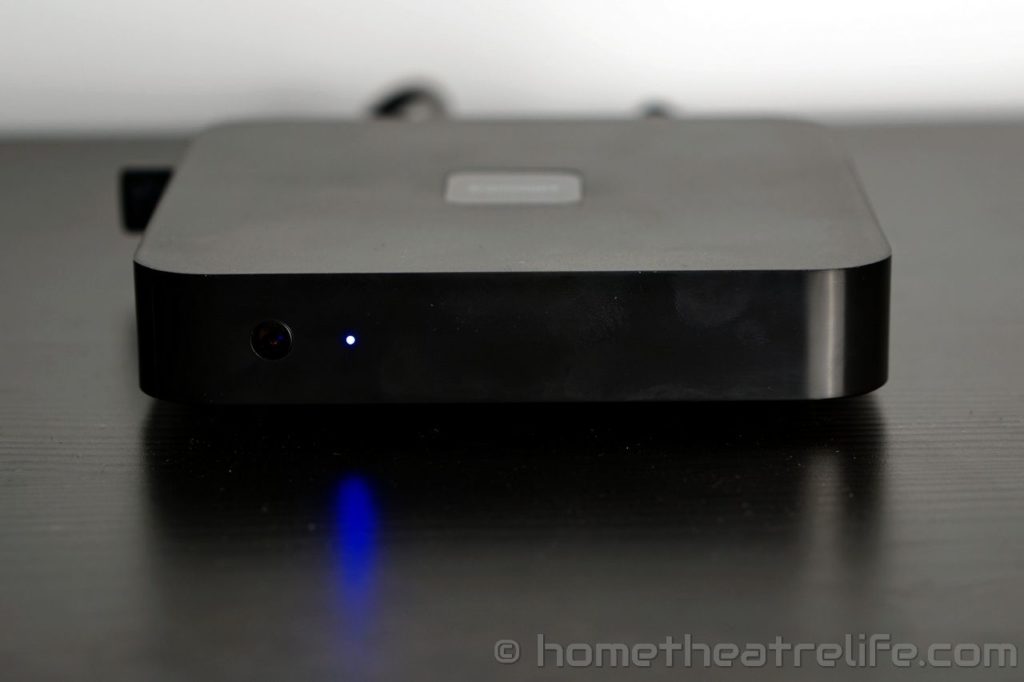 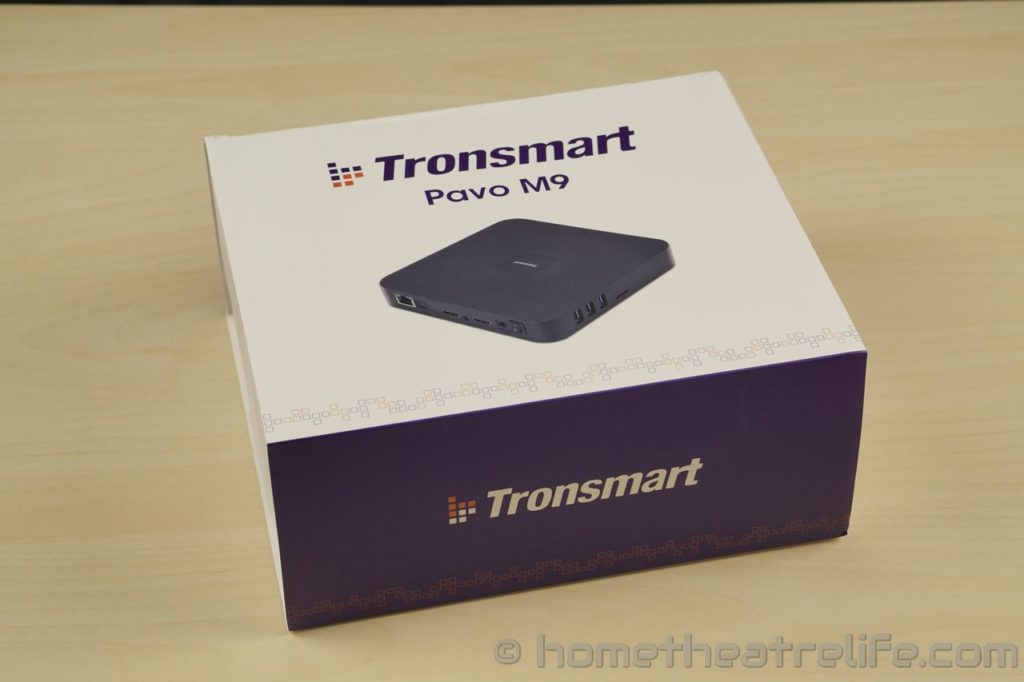 Inside the box, Tronsmart have been fairly comprehensive with their inclusions: 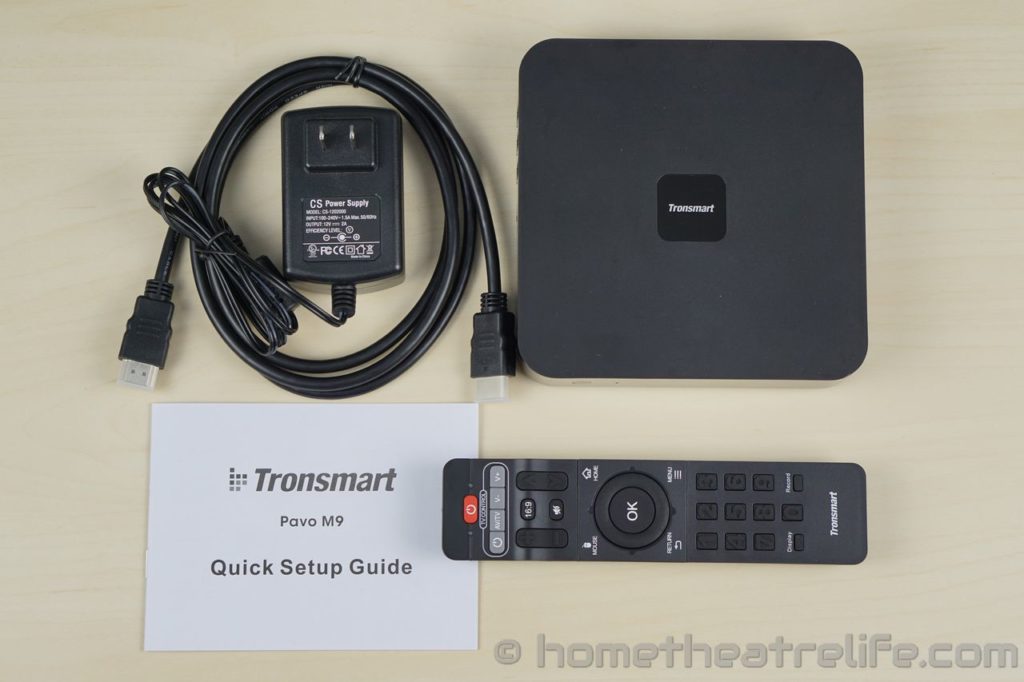 The Tronsmart Pavo M9’s design an unobtrusive black square that follows in the footsteps of Tronsmart’s recent designs. It stays out of the way but I can’t help but wish they made something that looked distinctive. 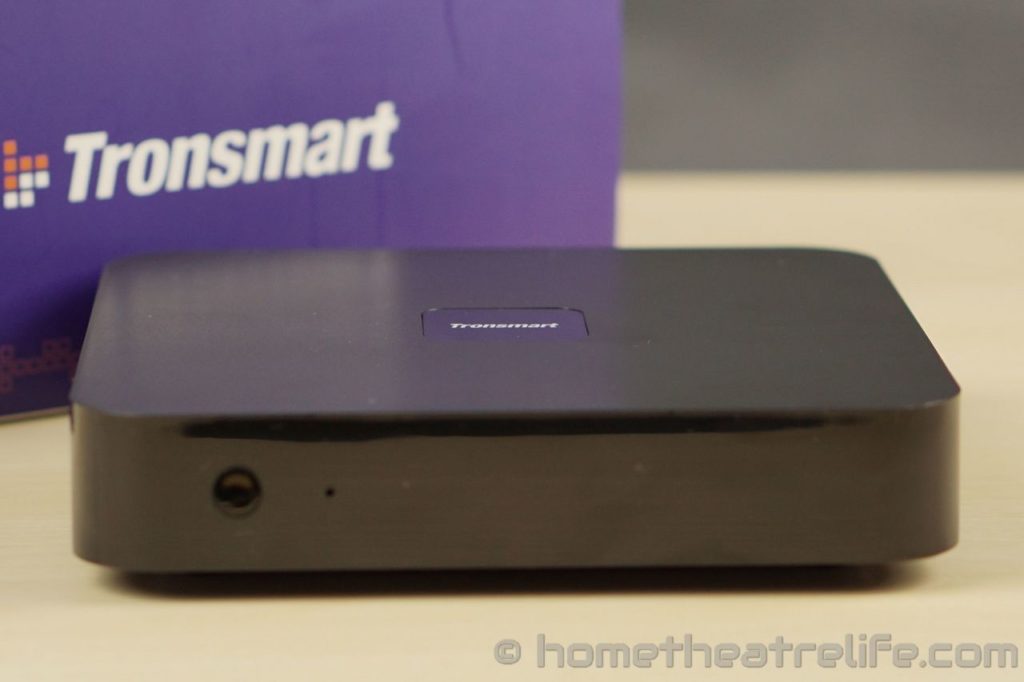 At the rear of the device (from left to right), we have Ethernet, optical audio, Reset button, HDMI In, AV out, HDMI out, DC in and the power switch. 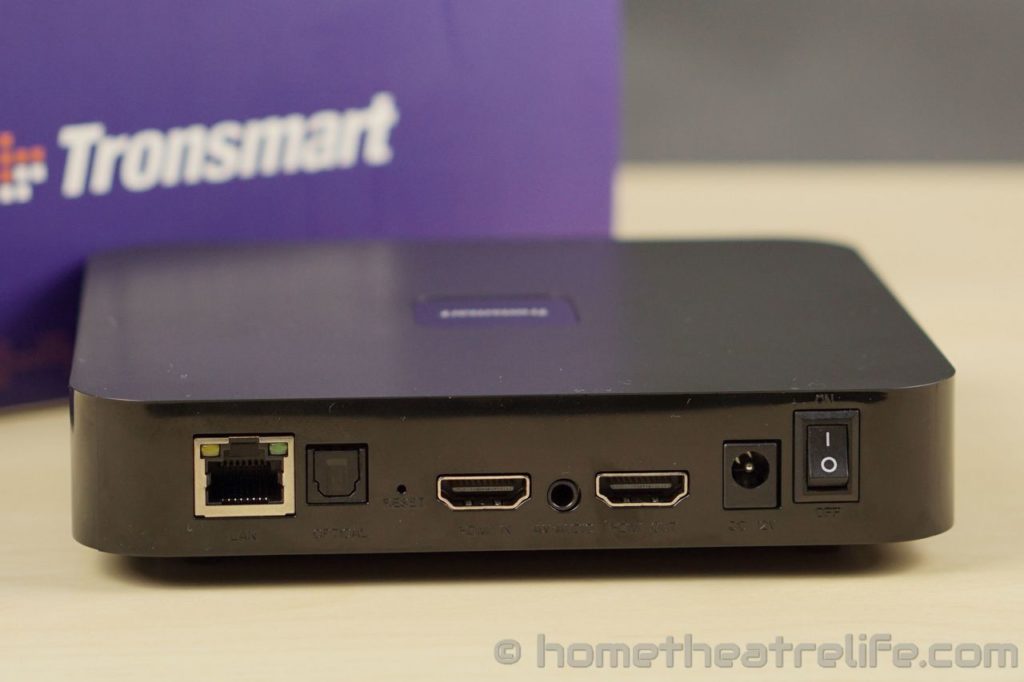 The side of the device features a USB 3.0 port, two USB 2.0 ports and a micro SD card slot. The included remote is great, offering a variety of functions at your fingertips. From key Android functions like Home and Menu to mouse control and one-touch recording, it’s all here. Powering up the device is done via a flick of the switch. A cold boot takes around 30 seconds, almost identical to the Zidoo X9.

On first boot, the resolution was correctly set to 1080p. Resolutions up to 4K at 30Hz are supported. 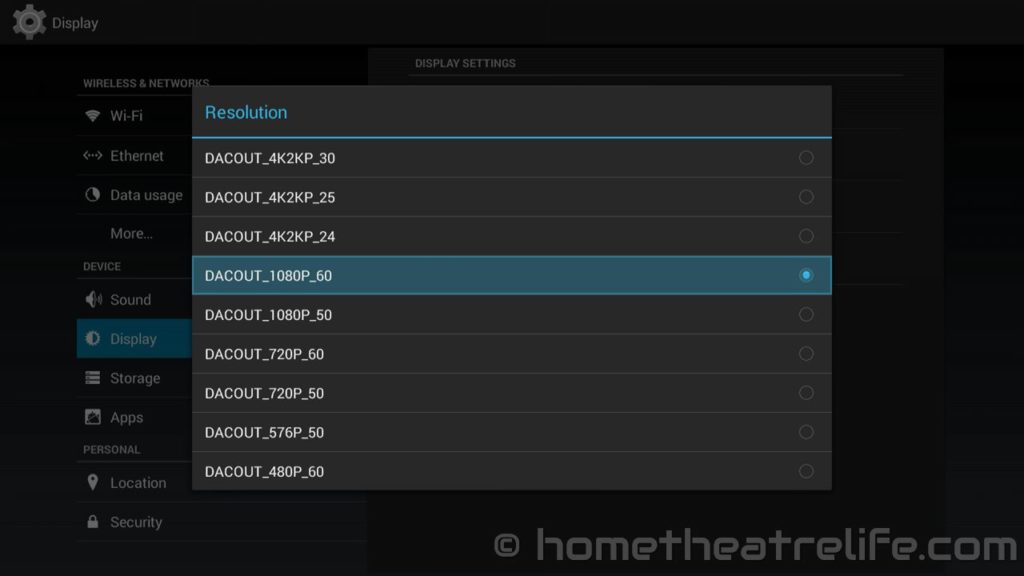 The Pavo UI is heavily “inspired” by the Zidoo X9’s ZIUI. The main menu has cards for groups of applications or individual apps such as the HDMI recorder. 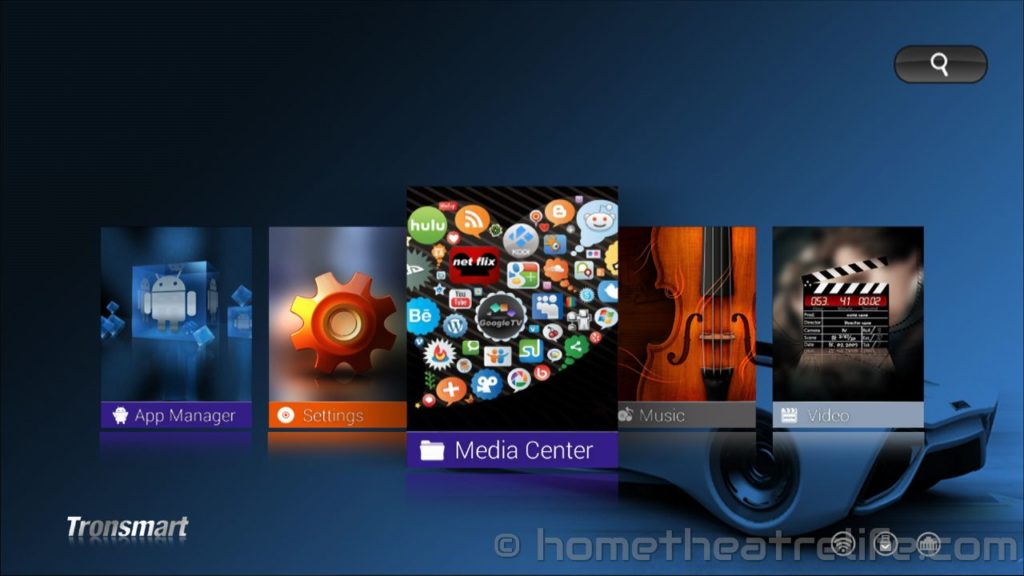 It’s very intuitive and looks fantastic in motion. I’d love to see Tronsmart bring it across to their other devices. It is locked at 720p however, movies play at their native resolution. The unit is rooted out of the box for those that need it. HDMI CEC isn’t supported as far as I can tell.

Those who have used the Zidoo X9 will be right at home with the HDMI Recording function. You can select the recording resolution and format, and even schedule a time to start recording. Unfortunately, there’s no option to schedule recurring recordings (such as every Monday at 7pm) but hopefully Tronsmart will add it in a later firmware update. 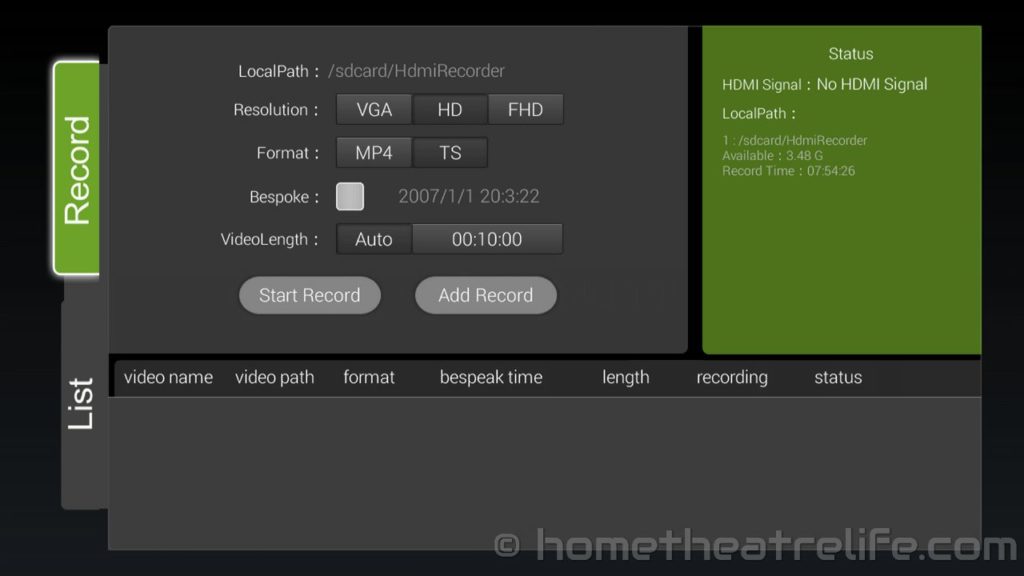 I’ve embedded a sample from the HDMI recorder so you can get a feel for the quality:

Tronsmart have also recently added a Picture-in-Picture feature in their latest firmware, allowing you to view the HDMI input and use the Pavo M9 at the same time.

I was able to play the Sintel Bluray ISO in Kodi without any issues so Bluray ISOs appear to be supported. 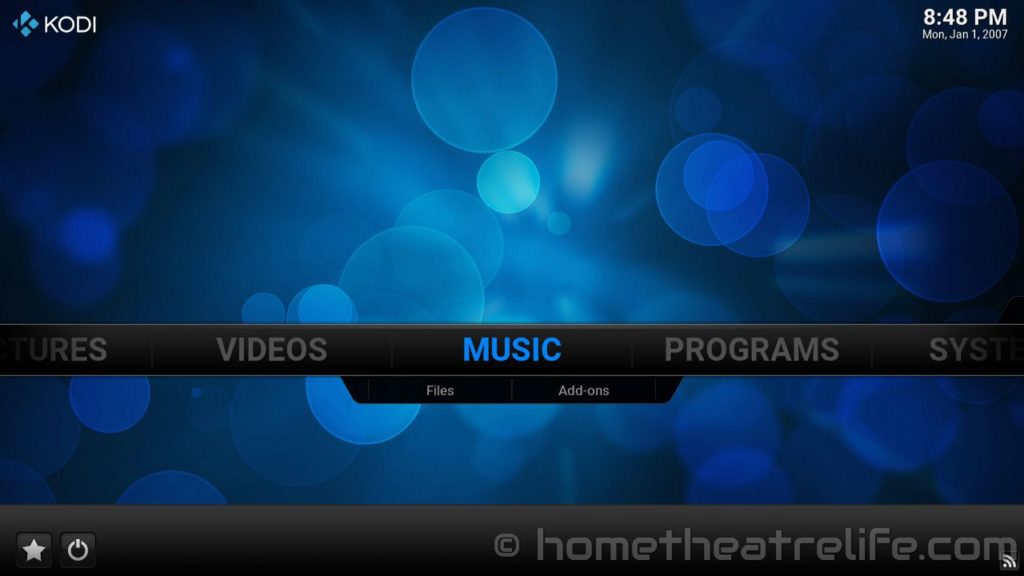 Video playback was generally pretty good. I did experience some issues in Kodi that didn’t occur in MXPlayer so I’m guessing this is related to the SoC being used.

Netflix worked fine during my testing, although the app’s UI is more tailored towards touchscreens so I’d recommend a good airmouse over the included remote.

I was able to plug in my USB drive and 2.5″ HDD and play videos without any issues. The USB drives were automatically mounted upon plugging them in.

Gaming performance was great, although that can partially be attributed to the 720p UI lock. Jetpack Joyride played great and Beach Buggy Racing was very playable, even on the highest graphics settings. However, as the games are rendered at 720p then upscaled, there are some jagged edges noticeable when viewed on a 1080p display.

Unfortunately, the Tronsmart Pavo M9 is missing Bluetooth unlike the Zidoo X9, so Bluetooth game controllers are off limits here. I was able to connect up my Tronsmart Mars G01 and play Beach Buggy Racing however so all is not lost on the controller front. 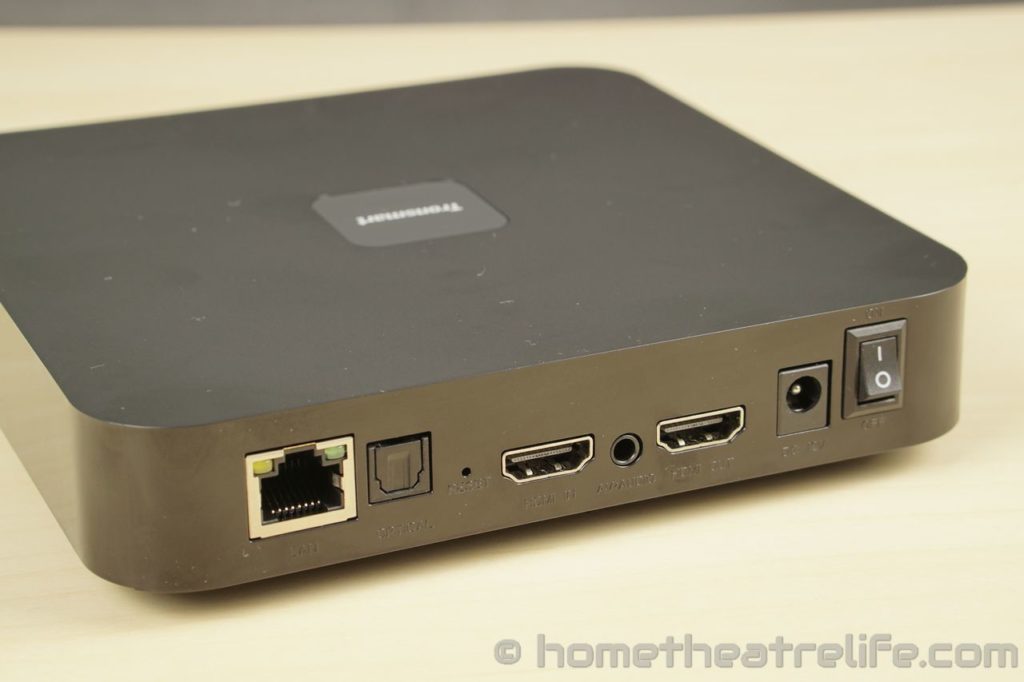 Wireless performance on the Tronsmart Pavo M9 was mixed. Average download speeds were excellent, consistently achieving around at 50.1 Mbps. Upload speeds were appalling though, reaching 1.3 Mbps on average.

In real-world usage, WiFi performance seemed solid. I was able to stream my 4K and 1080p samples from an NFS share and watch Netflix without any noticeable buffering. I couldn’t get Epic Citadel to run, with it crashing just after loading the splash screens.

Internal memory read/write speeds were around 30 and 5 MB/s respectively. RAM copy speed was benchmarked at 1045.28 MB/s.

For the USB 3.0 port, I was able to achieve read and write speeds of 36.66 MB/s and 16.17MB/s respectively on my Kingston DataTraveller Elite.

Power consumption was slightly higher than other Android boxes I’ve tested, idling around 8W. As the device doesn’t have a standby mode, no standby power rating is provided.

The Tronsmart Pavo M9 is a good deal for those wanting a media player that can also record via HDMI. The amount of functionality that you are getting for $70 is great, although there are some limitations. Those wanting a little bit more power should consider the Zidoo X9.

However, those wanting a capable media player and HDMI recorder that can do a little gaming on the side should be pretty happy.

You can purchase the Tronsmart Pavo M9 from GeekBuying. Click here to view the latest price.

Tronsmart Pavo M9
The Tronsmart Pavo M9 is a solid Android media player, particularly if you want to record via HDMI. The fact you get all this functionality for under $70 is impressive. However, its intuitive UI and solid feature set is let down by minor issues such as the lack of Bluetooth.
Pros
Cons
7.2

5 thoughts on “Tronsmart Pavo M9 Review: HDMI Recording for under $70”