Trying to find the ideal XBMC/Kodi box is a tough preposition. With so many Android boxes out there, which one should you choose? VidOn have come to the table with the VidOn box, a gorgeous aluminium box packing a quadcore Allwinner A31S chipset.

I want to say a special thanks to Geekbuying for supplying me with the VidOn Box to review. You can purchase one from them here. Alternatively, the VidOn Box is also available via [amazon text=Amazon&asin=B00PGPF1IU].

The packaging of the VidOn box is exceptional. Sleek and matte black with an embossed VidOn.me logo, you can see that a lot of time was thought about the unboxing experience and feels very reminiscent of Apple. Everything has its place and fits perfectly which is impressive.

The VidOn Box comes with the basics to get started. Inside the box you get: 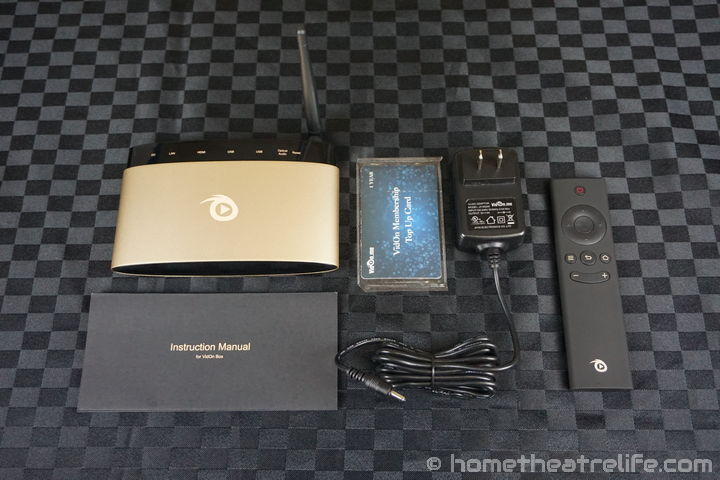 It is a shame not to have a HDMI cable included in the package and in this day and age, it really should be considered a mandatory inclusion. I know they only cost a couple of dollars and many of you probably have spares so its not exactly a black mark against the VidOn Box but still something I’m disappointed about. 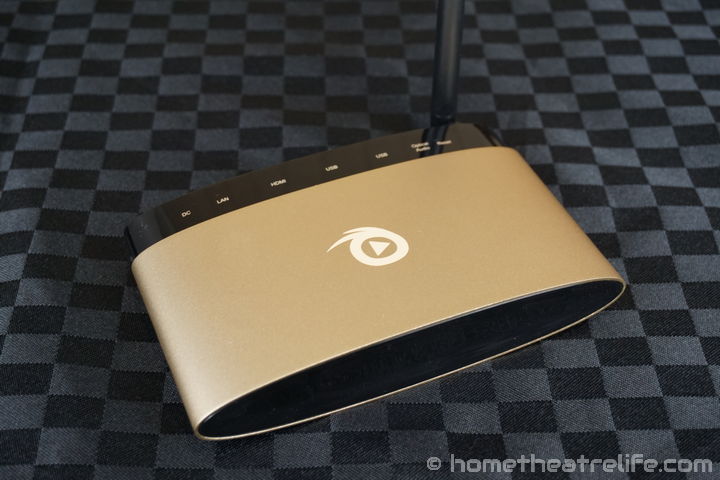 Gorgeous! That was my first reaction when unboxing the VidOn Box. This thing really is attractive. The VidOn Box uses a unibody aluminium shell which is an appealing champagne color. I was worried that the box would look out of place next to my equipment but it fits in nicely. The gold color is distinct but not distractingly so. The aluminium shell not only gives the device a premium feel, but it also adds weight for stabilisation and doubles as a giant heatsink to dissipate heat.

The front of the box features a non-descript glossy panel that hides the IR sensor. When the Vidon Box is powered on, a dull white light hidden inside the front panel acts as the power notification. Unfortunately, the box is lacking a physical power button which is a shame. Instead, it boots as soon as it’s plugged in. I still don’t understand why this has to be considered a “feature” with so many of these boxes! The rear of the device holds all the device’s ports, each clearly labelled on the top of the device. Going from left to right, there is optical audio output, 2 USB Host ports, HDMI out, Ethernet and DC Power input. There is also an external wifi antenna which aids in getting a stronger wifi signal. 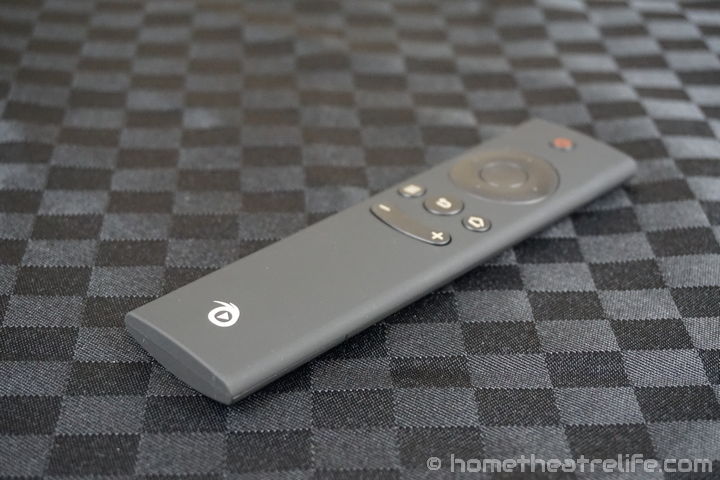 The included remote takes inspiration from those seen with the Apple TV, offering minimal buttons but being very asthetically pleasing. However, for Android, this minimalism is more of a hindrance than a help, lacking many of the necessary buttons for the many uses the box is capable of.

The remote offers a power button for putting the device into standby and directional buttons with a central “OK” button. Below this is the 3 standard Android buttons – Menu, Back and Home and a volume rocker. However, the giant gaping hole here? No media buttons. At all. For a box that is media-centric, this is really disappointing.

However, it does have a nice rubbery coating that prevents it from slipping from your hands.

Booting the device was reasonable, getting to a usable state in approximately 50 seconds. It booted with a resolution of 720p, which I needed to manually adjust to my TV’s 1080p resolution rather than it automatically being detected. This is clearly for compatibility reasons, as for those of you who are still rocking 720p TV sets, default 1080p output can be a nightmare.

On the first boot, the VidOn Box loads a wizard to guide you through the setup process. This is a very nice touch, as it ensures that you get the device set up correctly the first time. The only issue I experienced was a lack of clarity of where to go after I’d set up my wifi connection. After I’d entered my passkey, I thought I’d need to select next to continue the wizard. This wasn’t the case, with me needing to actually go back to the network setup step and then click next, as the wifi option had now turned green. I’d suggest that once an internet connection is detected, the wizard should automatically continue.

One thing that I hated, with the fiery passion of a thousand suns, was that I was forced to create a VidOn account and bind the included VidOn Membership card in order to complete the wizard. If I’ve paid for a box, I should be able to bypass the whole account process altogether if I wish.

The last step of the wizard was an automatic update which was a nice touch – nothing like getting the latest firmware without needing to do anything!

VidOn has developed a custom user interface which helps differentiate it from its competitors which is refreshing. Using a very dark set of greys and blacks help convey the premium feel the device is going for. It’s split into 3 tabs – My Apps, Files and Settings. My Apps contains a scrolling list of apps you have installed. The device only comes with the two VidOn XBMC versions you see in the above screenshot – one is VidOn XBMC Pro and the other is VidOn XBMC (more on this below). 1-click installations for Hulu Plus, Netflix and Pinterest are also available – denoted by a small download arrow on the bottom-right of each icon.

One thing that did bug me was that although the device had been set to 1080p output, as reported by my TV, the device UI is only being output at 720p and then upscaled. Whilst from a UI perspective, this is not really a massive issue, it meant that every Android app I tested would only render at 720p. This causes some massive headaches – the native YouTube app refused to expose 1080p streams and stock Kodi was rendering at 720p and upscaling too. The only was to get true 1080p playback was to use VidOn XBMC, which is a shame.

The Google Play store was added in a recent software update which is great. I had no issues installing apps but don’t bother trying to use it with the included IR remote. I wasn’t even able to reach the search function without using my Mele F10 Deluxe air mouse.

For you lovers of root access, the VidOn Box does not come pre-rooted.

VidOn’s key differentiator of the VidOn Box is VidOn XBMC. This is a custom fork of XBMC that offers a few features above the standard XBMC/Kodi install, namely full Bluray menu support – something which has traditionally been a challenge on XBMC. However, VidOn XBMC’s 13.2 Gotham base is a few releases behind Kodi 14.0.

VidOn splits VidOn XBMC into two versions – a “standard” version which is similar to vanilla XBMC and VidOn XBMC Pro, which requires a VidOn Membership to enable Bluray menu support and HD audio passthrough. On starting the Pro version, you’re asked to log into your VidOn account to verify your licence. Other than this, I wasn’t able to identify any other differences. It would be nice if this was integrated into a single app, rather than needing two separate icons, as it just adds unnecessary clutter and causes confusion.

I can’t give a full review without mentioning the VidOn membership. Whilst by no means required, it does offer a few perks such as OTA updates, Blu-Ray Menu Navigation and HD Audio Passthrough. There are some additional perks offered for VidOn’s other products. For more information, see the comparison here.

The cost of a 12 month VidOn Membership is $15. Whilst not expensive, you do need to consider whether you’ll need one and build this into your costs accordingly. Thankfully, VidOn includes a 12-month membership inside the box so you can evaluate whether it’s truly worth it for you.

I started my testing using Antutu Video Tester 2.2. This application runs through a number of video files with different codecs and outputs the results: 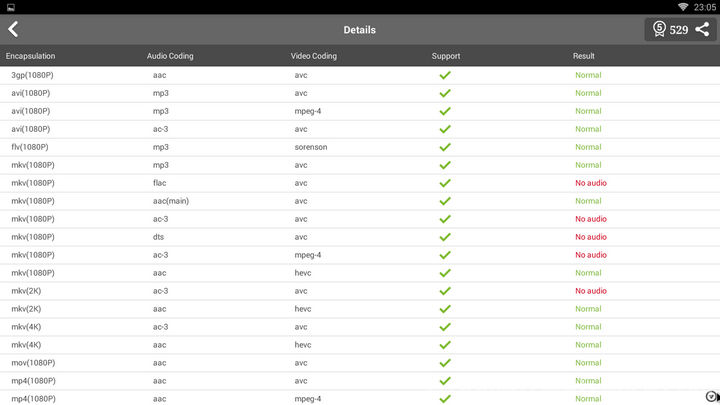 One thing that is immediately obvious is that the 1080p RMVB playback failed, and AC3, Flac and DTS audio also returned “No Audio”. I then went to VidOn XBMC to test these failed codecs to see how they performed. AC3 audio played fine, suggesting that only software decoding is supported. RMVB failed miserably, with a 720p sample file playback being incredibly laggy.

I mentioned before that only VidOn XBMC can play media in true 1080p and this was verified by installing stock Kodi and using a 1080p test pattern. Stock Kodi was clearly rendering at 720p then being upscaled, which means you are effectively locked into VidOn XBMC if you have a 1080p screen which is unfortunate.

Hi10p playback was a no-go, with the 720p file lagging badly, and the 1080p file freezing up almost immediately.

Please note that due to device limitations, all gaming is at 720p then upscaled. Whilst this means that the framerate is better, graphical fidelity is sacrificed.

Gaming performance on the VidOn Box was excellent. The 2D Angry Birds was exceptionally smooth, with no noticable lag. I connected my Tronsmart Mars G01 controller to test out Beach Buggy Racing and was able to max out the graphical settings whilst maintaining near-30 FPS at all times which is great.

The lack of Bluetooth meant my [amazon text=Moga Pro Power&asin=B00FB5RBJM] had to sit this test out.

To test wireless speeds, I used WiFi Speed Test to transfer a 100 MB file to and from a Samba share. This test was completed 3 times and the average speed was recorded. Wifi performance on the VidOn box was good, yielding an average upload speed of 6.77 Mbps and a download speed of 7.34 Mbps.

I had no problems streaming a 1080p video from a Samba share on my server. Playback started promptly and I saw no buffering at all.

It’s important to note that wifi speeds are affected by a wide variety of factors such as network equipment and environmental interference so your results may vary.

I was able to connect both a USB thumbdrive and a 2.5″ portable harddrive and play media files off them without any issue.

The 720p UI lock unfortunately prevents me from tested the true potential of the VidOn box in terms of graphics capabilities. However, the VidOn Box scored an average FPS of 55.0 in Epic Citadel. 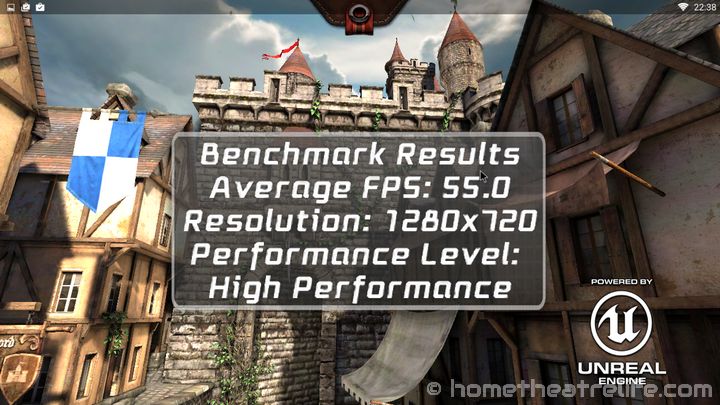 The VidOn Box scored 14826 in Antutu. This result was expected but it’s below that of the MK808B Plus, which is a shame given its price. VidOn has already released a number of updates since the box’s release which is a positive sign towards ongoing support. I’m hoping they keep it up.

Getting a VidOn Box

You can purchase a VidOn Box from Geekbuying here. Alternatively, the VidOn Box is also available via [amazon text=Amazon&asin=B00PGPF1IU].

VidOn Box
The VidOn Box is physically stunning with above-average video support. However, a lack of 1080p output for all applications except VidOn XBMC output combined with locking core features such as OTA updates behind a paywall is very disappointing. It definitely has potential and some issues could be fixed via software, but at this stage, there are better units out there.
Pros
Cons
7.2