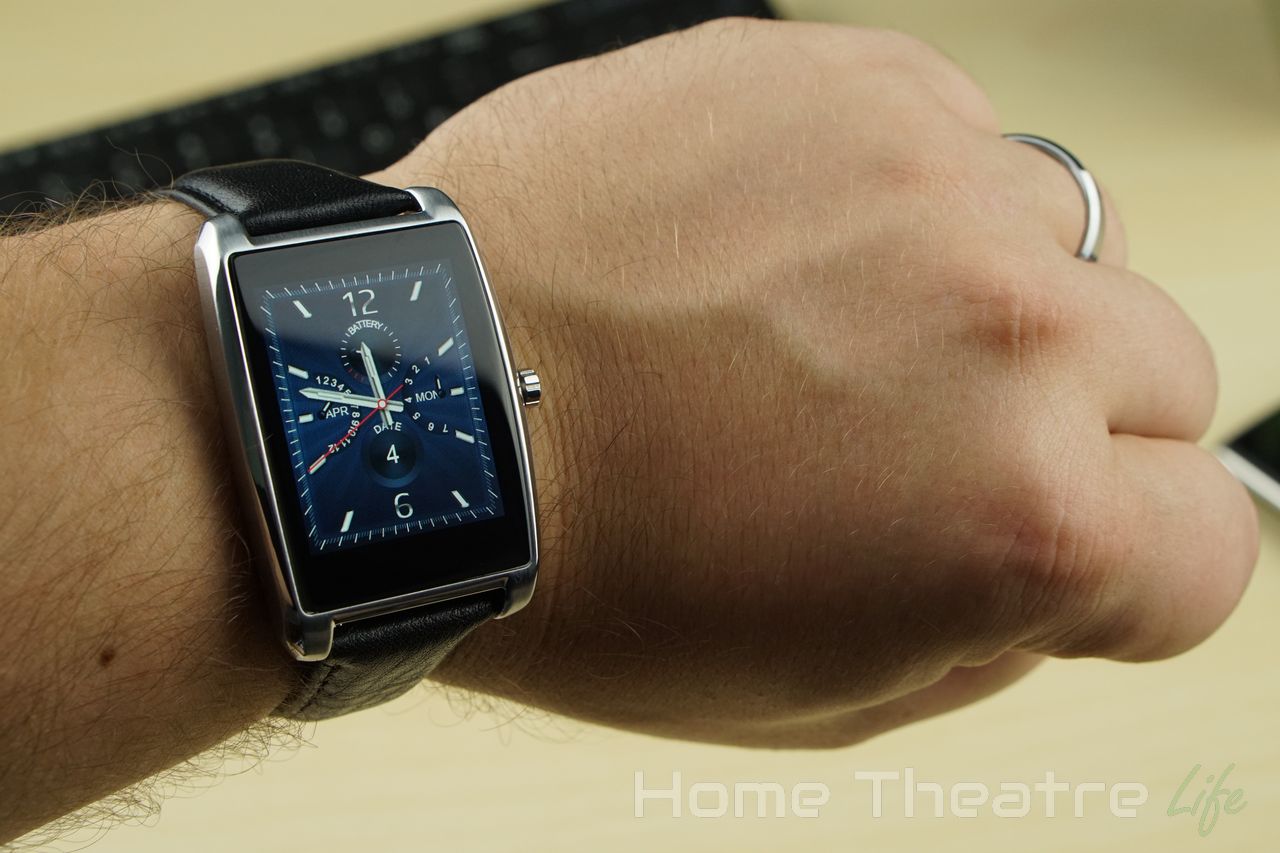 The Zeblaze Cosmo is the latest smartwatch from the company and a followup to the excellent Zeblaze Crystal which I reviewed last year, opting for a more traditional style than its predecessor.

Is Zeblaze’s latest wearable another must have timepiece or a useless gadget? Read my Zeblaze Cosmo review to find out.

I want to say thanks to GeekBuying for sending me a sample to review. Use coupon “PDBGRRCO” to get $12 off! There’s no charger inside the box but any USB port should work.

The Zeblaze Cosmo’s design is far more traditional than its predecessor, losing its rounded edges for a thinner, more rectangular design that does a much better job at hiding that it’s a smartwatch at first glance. Opting for a rectangular 1.61 inch screen sporting a 320×256 pixel resolution, it’s easy to mistake the Cosmo for a traditional watch at first glance. The bezel around the screen is around 1mm so it’s not too bad. The only button, styled like a traditional watch’s crown , sits on the right side. Flipping the unit over reveals the heart rate sensor and the new magnetic charging connector. The microphone and speaker is incredibly well hidden, sitting where the band meets the top of the watch.

Speaking of the band, the Zeblaze Cosmo ships with a 22mm leather band that’s comfortable for all-day wear. Thankfully, it seems to be a standard 22mm band so swapping it out for something more to your tastes should be easy. I’ll be picking up an all-stainless steel band soon enough. There’s two colors available, gold and silver. I’ve opted for the silver model due to my well documented dislike of gold.

Holding down the button will power on the Zeblaze Cosmo, taking a few seconds to load the UI. The Zeblaze Cosmo’s UI is largely the same as the one that shipped with the Crystal. It uses pages of colorful icons that can be swiped through vertically. There’s another color scheme available that swaps out the rounded icons for squares and a more subdued color scheme. I found both equally attractive so it’s up to you which you prefer. There’s a few things that bother me about the software. They’re minor but they detract from the unit’s overall polish. Some of the app names are not capitalised correctly so they don’t match the other icons. Some labels also get cut off which is disappointing.

The screen itself is nice and sharp, definitely benefiting from the higher resolution compared to previous models. The new IPS display also offers far better viewing angles. This leads to a smartwatch that is far easier to read, even in bright sunlight.

In terms of functions, there’s a massive amount of variety here, including a calculator, Bluetooth camera shutter, music player, pedometer and even two separate heart rate monitors (one does continuous heart rate monitoring whilst the other only does it at a point in time). They all work well, though I’d argue that the two heart rate apps should really be combined into one. It’s great to see that iOS users are well catered for, with a dedicated app for triggering Siri and a special iOS mode for the Bluetooth shutter to make sure the functionality gap between Android and iOS users is minimized. The pedometer function is also works well. It’ll run in the background and reset automatically at midnight which is a nice touch. Accuracy was reasonably good too, counting 2807 steps on my morning walk vs 2998 on my iPhone 6’s motion processor. There’s also some really handy motion controls that worked well during testing. After enabling them in settings, you can have the watch automatically turn the screen on when its raised, reject calls by flipping your wrist and. They’re welcome additions that worked well.

Pairing the watch up is a simple case of navigating to the connection menu and selecting your phone from the menu. This will allow you to take calls and play music through the watch. In order to access notifications, you’ll need to make a secondary link to the Cosmo via the appropriate smartphone app. The Zeblaze Cosmo supports both iOS and Android devices via either the Fundo Wear (iOS/Android) or Mediatek SmartDevice (iOS/Android) apps.

Fundo Wear features fitness and sleep tracking, in addition to sending notifications to your smartwatch. However, I don’t find the app intuitive, with much of the smartwatch and connectivity options hidden by obscure icons. I hate the fact it forces you to create an account in order to even access the notifications options and the sync function didn’t seem to work at all. Those wanting a simpler option would be better suited to Mediatek’s app. It’s definitely my preferred option. To get a feel of how the app works, check out my Zeblaze Crystal review.

Notifications were able to work with both iOS and Android, though the Android experience was far better.

Android users are able to filter which apps can send notifications. You can also respond to messages using a set of preset responses which is a nice touch and a far better approach than the full keyboard provided in the No.1 S3 smartwatch. Unfortunately, there doesn’t seem to be a way of customising these which is a shame though they do cover off the most common situations. iOS users get every single notification pushed to their wrist. Whilst it works well, there’s certain apps that you want notifications on your phone but don’t need them on your wrist. Of course, this isn’t Zeblaze’s fault – blame Apple’s locked down OS. I also had a frustrating issue where a single notification would sometimes cause my iPhone to push all the notifications again. I’m suspecting it’s an issue with the app though.

The Bluetooth connection was reasonably stable, with only the occasional drop out. Thankfully, the watch reconnected quickly when it did.

The Zeblaze Cosmo has five completely new watch faces on offer (4 analog and 1 digital) but I found they weren’t as interesting as those on the Zeblaze Crystal. The lone digital watch face uses an odd card motif that leaves much of the screen empty space. It looks too sparse given the fantastically The analog designs vary in terms of their attractiveness. I really liked the blue face, with its multiple working dials for the day and battery remaining. It’s the only face that felt like it belongs on a smartwatch. The Zeblaze Cosmo has a built in speaker and microphone. Speaker quality is about what you’d expect for a tiny speaker mounted to your wrist. Audio lacks bass, but it’s fine for speech and is fairly loud, though it may be hard to hear people if there’s a lot of background noise.

Microphone quality was reasonable, with the other party reporting clear audio as long as you kept the smartwatch near your mouth.

The new magnetic charging connector is simultaneously a handy improvement and failure when compared to the charging cradle that came with the Crystal. It’s far easier to hover the new connector over the back of he Zeblaze Cosmo and have it automatically connect that the Crystal’s clip-on cradle. It’s also polarised so it can’t be connected backwards which is a nice touch. That said, the magnets are fairly weak so I could only get it to stay attached when the watch was face down. The fact that a small knock could stop your watch from charging really is disappointing and there were a number of occasions where I woke up to a flat watch as I’d knocked the charger during the night. Stronger magnets would have been a good idea. Battery life on the Zeblaze Cosmo was decent. With the motion sensors active, I was able to get 2 full days of usage before the unit shut down. Of course, lowering the brightness and turning off the motion controls will allow you to extend this further. The Zeblaze Cosmo is a successful followup to the Crystal which simultaneously feels familiar and different.

Zeblaze haven’t expanded their smart-watches features, opting for what is ultimately a cosmetic upgrade. If you prefer the Cosmo’s traditional style or watch faces or are new to  smart-watches,the Zeblaze Cosmo is a good buy. However, Zeblaze Crystal owners will be hard-pressed to fork out for such an incremental upgrade.

The Zeblaze Cosmo is available from GeekBuying for around $69.99. Use coupon “PDBGRRCO” to get $12 off!

The Zeblaze Cosmo is another successful wearable from the company. It's well-designed and offers impressive functionality, though it isn't without its flaws.
Pros
Cons
7.4

Setting Up PS4 Remote Play on Windows and Mac