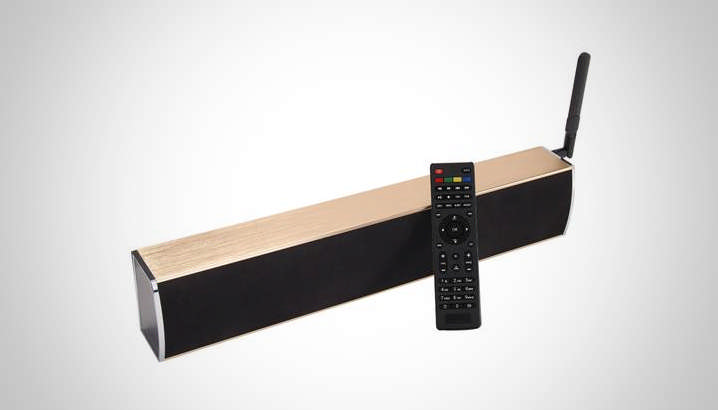 An interesting device has appeared on Geekbuying recently. A change from the usual TV boxes, the is a hybrid device that fuses a soundbar with an Android box.

The unit itself is powered by the quadcore Amlogic S905 and runs Android 5.1. The rest of the specs are pretty much as you’d expect for a low end Amlogic S905 box, offering 1GB of DDR3 RAM, 8GB of NAND storage, 2.4Ghz b/g/n wifi, gigabit ethernet and Bluetooth 2.1 (which is odd given that they usually include Bluetooth 4.0).

There’s also a DVB-T2 tuner to allow you to watch (and presumably record) TV on the unit. Being that the unit is a soundbar, speaker power is important. The unit claims to be capable of 50W of output. How good the actual drivers are is unknown. Audio input is handled via coaxial (digital) or 3.5mm analog inputs.

GeekBuying have only got the brushed gold version listed though I have seen a brushed silver version that would blend in much better with other AV equipment.

Where to buy the KS2 Android Soundbar

The KS2 Android Soundbar is available from GeekBuying, GearBest, and AliExpress for around $130.