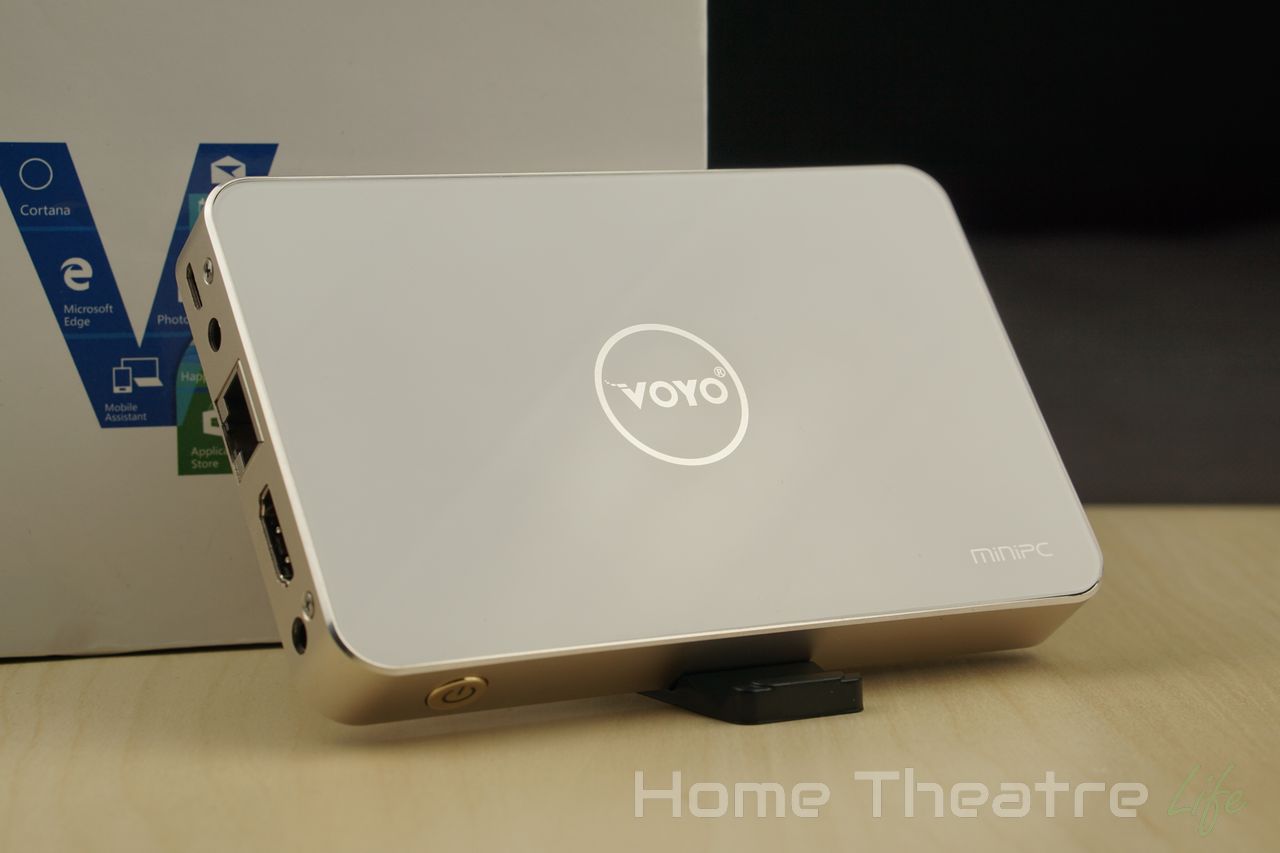 The VOYO V2 Mini PC is the latest Windows mini PC from PC manufacturer VOYO. Using the same Intel Z3735F used in its predecessor, it adds a 64GB SSD and stylish case featuring metal and glass. Is it any good? Find out in my VOYO V2 review.

I want to say thanks to GearBest for providing me a sample to review. Inside the box, VOYO have given the basics to get started:

I was happy to see a HDMI cable included, as some manufacturers exclude them which is a pain.

If you’ve experienced the original VOYO Mini PC, you’d now that it’s plastic case looked a little cheap. The VOYO V2 improves this dramatically, using a gold metal case with a white glass top. It looks fantastic and blends in well with current design trends. It’s nice to see companies being unique in their design and it pays off here. I’m not a fan of gold on electronics (as I may have said several hundreds of times in various reviews) but the VOYO V2 is closer to champagne than your typically gold. I’m still not in love with it but it could have been much worse.

Build quality seems really good, with the whole unit having a really nice feel to it. The visible screws do detract from the aesthetic but don’t impact the functionality at all. However, the underside of the device is completely smooth which proved to be a pain, with the device sliding around when I played with the cables. I added my own rubber feet and I’d suggest you do the same.

The front is minimalist, featuring a single power button with a green power LED. The left side features a micro USB OTG port, PC in, Ethernet, HDMI out and 3.5mm audio output. Lastly, a single USB 2.0 port is located around the back. Booting the VOYO V2 is done by holding down the power button for a few seconds. Windows boot up wasn’t the fastest I’ve seen to date but was still a reasonably respectable 30 seconds to reach the Windows desktop. Windows 10 is activated and it’s stock so no additional apps are included. Out of the box, there was 22.4/28.6 GB free on the C: drive and the SSD appeared as a 58.2GB D: drive. I did experience an odd issue where the D: drive disappeared once but a reboot seemed to fix it.

Windows 10 performance was solid, without any noticeable lag when navigating the OS or doing some light multitasking.

There’s also an internal battery in there that allows you to use the VOYO V2 without power. However, I noticed that it seemed to stop charging at 77%. Pulling out the power caused the unit to power off so it seems like you can only use it plugged in or via batter but the battery can’t be used as a type of in-build UPS which is a shame. Media playback was essentially on par with other Intel Z3735F PCs, handling H.264 content up to 4K 30fps well. Interestingly, software decoding of my 10-bit samples was useless and HEVC was unwatchable. However, that’s expected given the lack of hardware decoding support for this codec.

Automatic framerate switching worked as expected and 23.976fps content played back well without any noticeable stutter.

Deinterlacing performance was identical to other Intel Z3735F devices, which is to say good.

I didn’t have any issues watching videos from my NTFS-formatted USB thumbdrive and 2.5″ USB HDD. To test gaming performance, I installed 2 games from the Windows store – 1 2D and 1 3D title: Gaming performance was essentially identical to other Intel Z3735F devices. With lighter games such as the 2D Jetpack Joyride, the VOYO V2 handled it brilliantly. The more demanding Beach Buggy Racing saw framerates hover just under 30fps on maximum settings. Scaling back the graphical settings led to a much more pleasurable experience. Wireless performance was ok but not the best i’ve seen. Streaming 1080p H.264 video from my NFS share was fine, but stepping the resolution up to 4K saw the occasional bit of buffering in Kodi.

My router is approximately 5m away, with a single wall between the router and the device. WiFi performance is heavily impacted by a number of factors so your performance may vary.

Benchmarking of the internal flash was not the fastest but were reasonable, with read and write speeds of 82 and 34 MB/s respectively. I was hoping that the SSD would be super fast but unfortunately, that’s not the case. Read and write speeds were significantly slower so I’d suggest you install all your apps to the eMMC drive and use the SSD for storage of multimedia content.

Thermal performance was tested using HeavyLoad, a freeware application that simultaneously stresses the CPU and GPU.

This is a significant improvement over the original VOYO Mini PC which essentially overheated when you looked at it. That said, the unit does get pretty warm to the touch so the case it clearly doing its job to keep the device cool. The VOYO V2 is an improvement over its predecessor in almost every way. It looks and performs better. Windows and multimedia playback is great and I loved the extra storage (despite its mediocre speeds). However, the odd battery behavior and warmth of the unit under load are rough edges that did detract from the overall package.

If you’re in need of extra storage and want a Windows 10 PC, the VOYO V2 is a reasonable option. However, there are better yet pricier options available if you can stretch your budget.

The VOYO V2 is available from GearBest.

VOYO V2
The VOYO V2 is a respectable Windows 10 mini PC but it still has some rough edges.
Pros
Cons
7