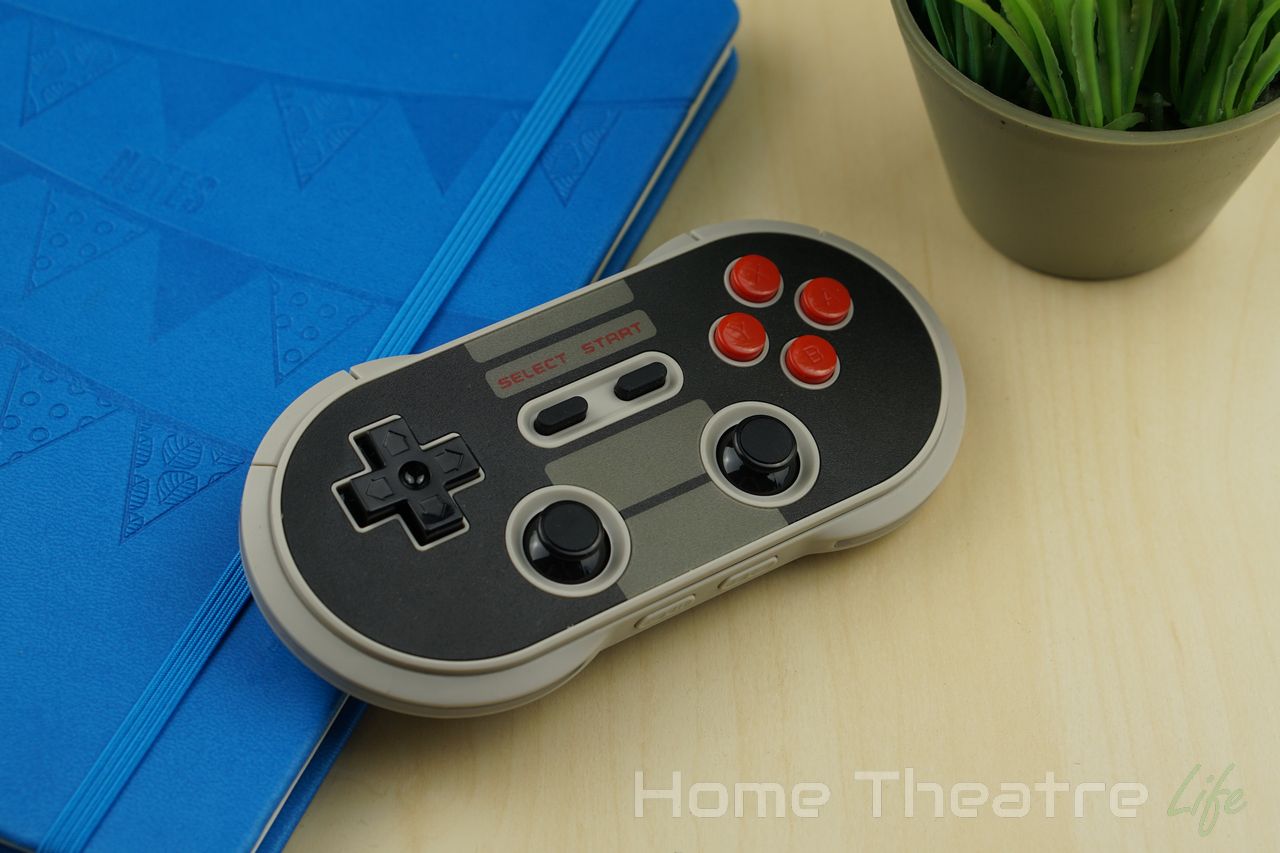 The 8Bitdo NES30 Pro is a compact Bluetooth controller that brings back memories of the original NES with it’s distinctive color scheme. With a full set of gaming controls and compatibility with Android, iOS, Windows and Macs, is this a must-have controller in a gamer’s arsenal? 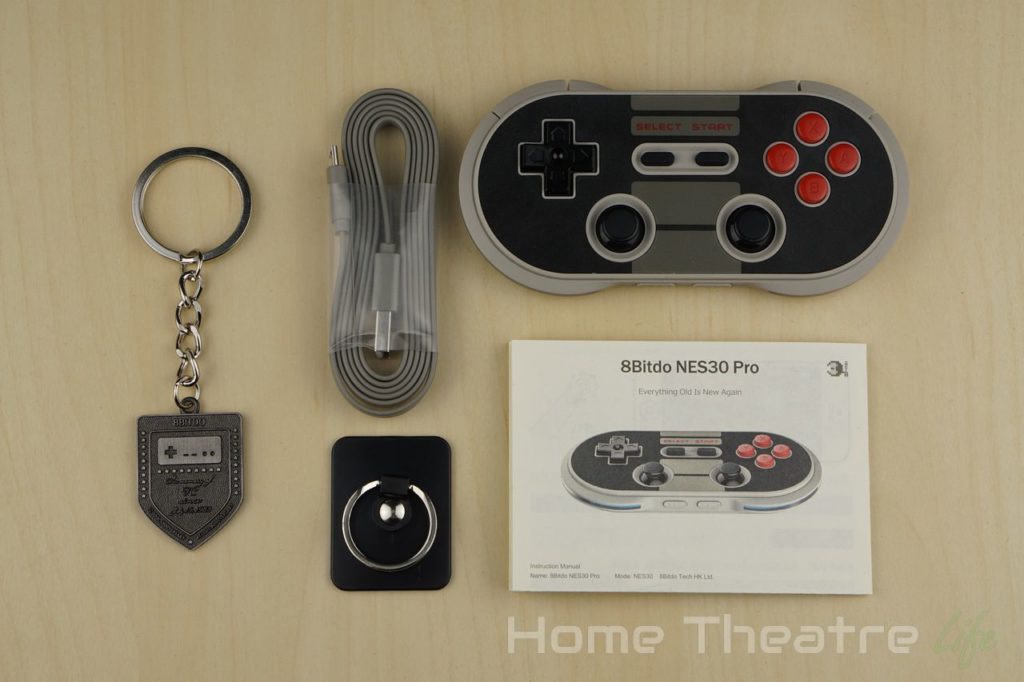 I’m pretty impressed with everything that 8Bitdo has included with the NES30 Pro. Inside the box, you get: 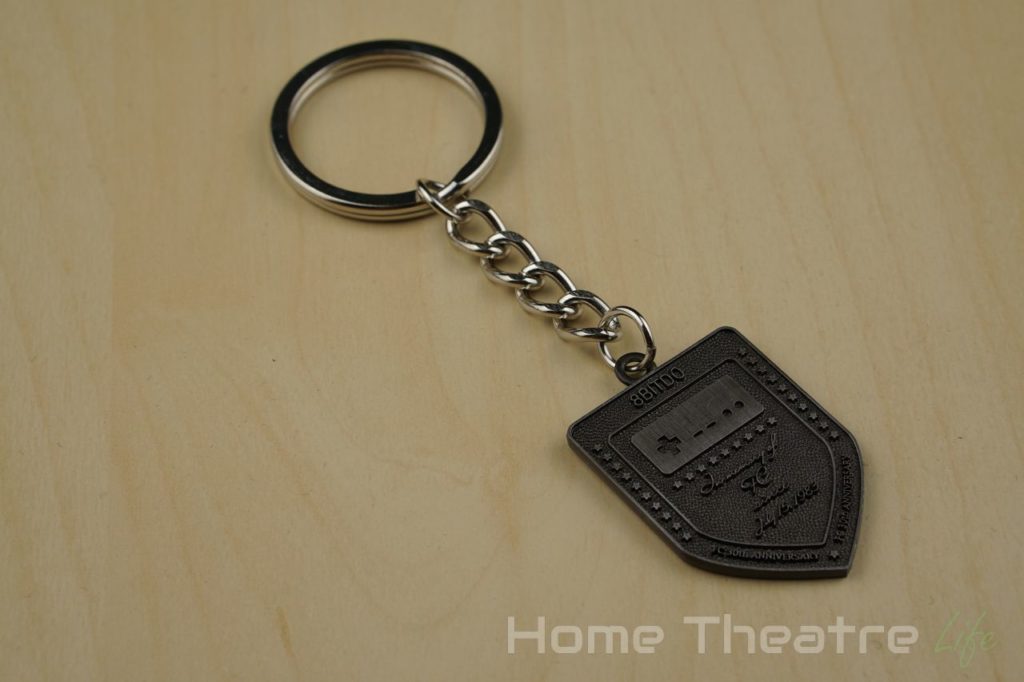 I love that 8Bitdo have gone to the effort of providing a few unexpected goodies with the controller.

It’s pretty clear that 8Bitdo love gaming and the inclusion of the awesome (yet arguably unnecessary) metal keyring is testament to their passion. Featuring a NES controller and the NES’ release date, it really is a love letter to Nintendo’s famous console and is a pretty cool inclusion.

The stand is reasonable. It basically sticks to the back of your smartphone, providing a ring grip when you’re holding your phone. The ring locks in at roughly 90 degrees allowing it to double as a smartphone stand on the go. It’s functional but definitely doesn’t replace a proper smartphone stand. Borrowing from the NES’ grey and red colour scheme, the NES30 Pro pays homage to its Nintendo’s legendary console whilst featuring its own unique twist. It’s like the love child of SNES, PSX and NES controllers all rolled into one. The nostalgia factor is strong with this one.

The actual shape of the controller is closer to that of the Super Nintendo, with two round bulbs that fit into your palms. It’s not as comfortable as modern controllers that come with consoles such as the PS4 or XBox One but it’s not uncomfortable. If you’ve used a SNES controller, you’ll be right at home. A full set of gaming controls are present here: dual analog sticks (with L3 and R3 buttons), d-pad, 4 face buttons (labelled XABY), start and select buttons and four shoulder buttons. This gives you enough scope for almost every retro console, although some may require some creative mapping (I’m looking at you Nintendo 64!).

There’s also power/home and back buttons for Android systems underneath. 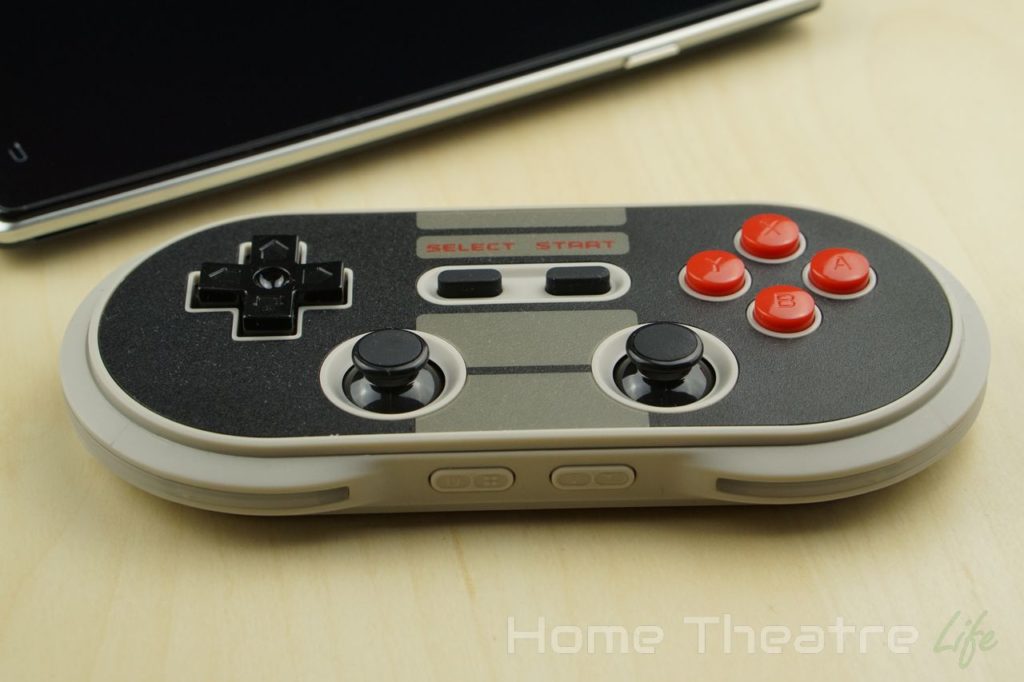 To make the controller so compact, it’s clear some compromises had to be made to fit all the buttons in. The L2/R2 buttons (they’re not triggers unfortunately) are located next to the L1/R1 buttons, rather than underneath like on a typical controller. It feels awkward at first, but it’s not too bad due to the curve on the controller. However, it’s not as comfortable  as the traditional trigger setup.

The analog sticks have a nice rubber coating on the top to stop your thumbs slipping. They’re small (slightly smaller than PSP’s analogue nub) so it takes some time to get used to but I didn’t have any issues when gaming. 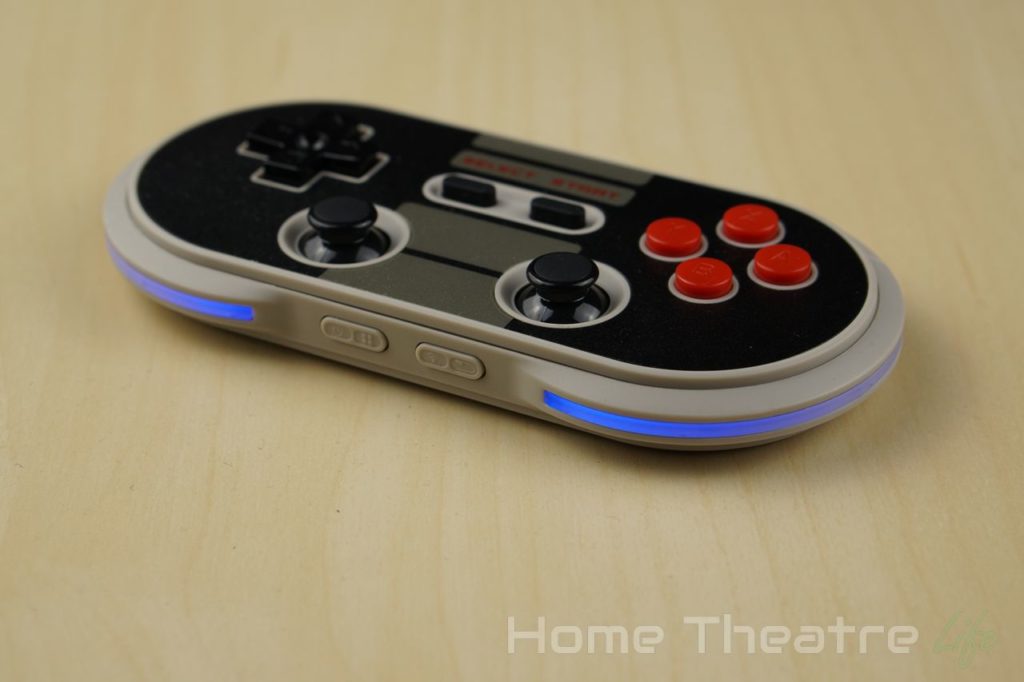 There’s also two RGB LED panels that flank the unit. 8BitDo has named them “Crissaegrim” LEDs after Alucard’s weapon in Castlevania: Symphony of the Night. They change colour based on various modes of the controller, such as blue when paired and yellow when updating firmware. It looks great, adds character and also provides valuable feedback on what the controller’s doing. It’s really is a clever solution. 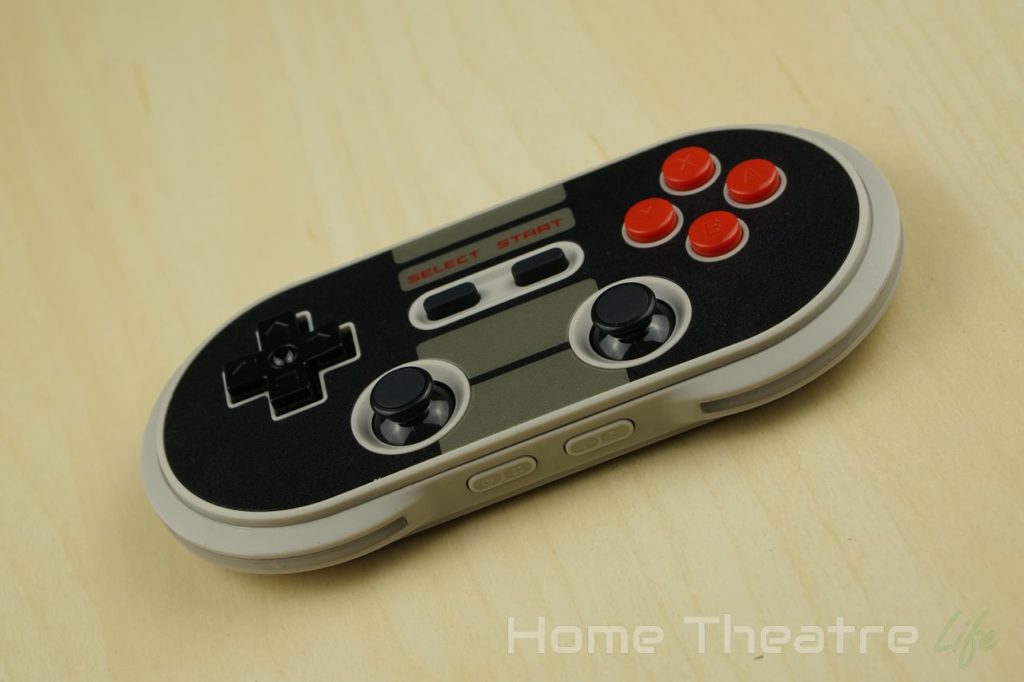 The NES30 Pro charges its internal battery via the micro USB port on the top of the unit.

Powering it up is done by holding down the power button for a few seconds. By default, the unit boots into Android mode. If you’re after another mode (such as XInput or iCade), just hold the appropriate face button when you power the controller on. For Windows games that don’t support XInput, the company provides a mapper application that maps controller inputs to keyboard keys which is useful.

Gaming with the 8Bitdo was great. The controller is responsive and the buttons have a nice tactile click to them so you know when they’ve been pressed. They’re not mushy at all. The all-important d-pad feels well-made and is responsive. I didn’t have any issues pulling off special moves in Street Fighter or Mortal Kombat. 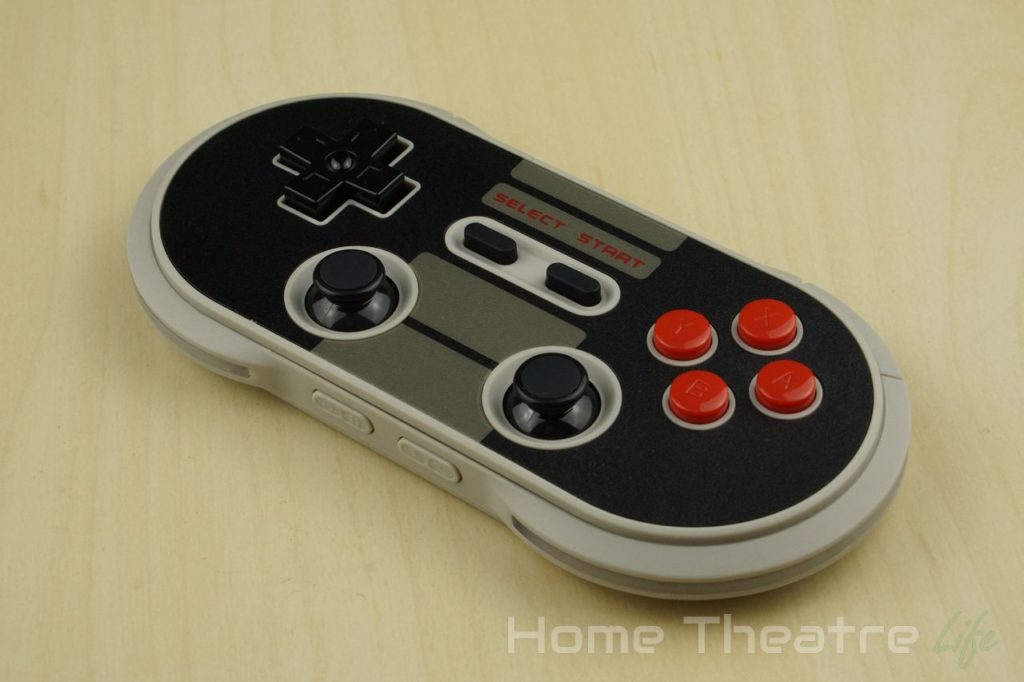 I did miss not having triggers with certain games (namely racers), though it didn’t affect gameplay.

The controller’s Bluetooth connection is rock solid. I didn’t experience any dropouts. Range was also good, being able to sit on the other side of my living room without issue (around 6m).

A unique aspect of the 8bitdo NES30 Pro is its ability to have its firmware updated. 8bitdo have released a number of updates, including “extended” firmware that has allowed the controller to be used on the PS3, Wii U and Retron-5 retro game console. That’s just awesome.

Flashing firmware was fairly straightforward though the instructions differ between the flashing app and the manual. Holding down both the power and back buttons until the lights flash yellow is the correct way. I couldn’t get the updater to work under Windows 10 but didn’t have any issues with Windows 7. 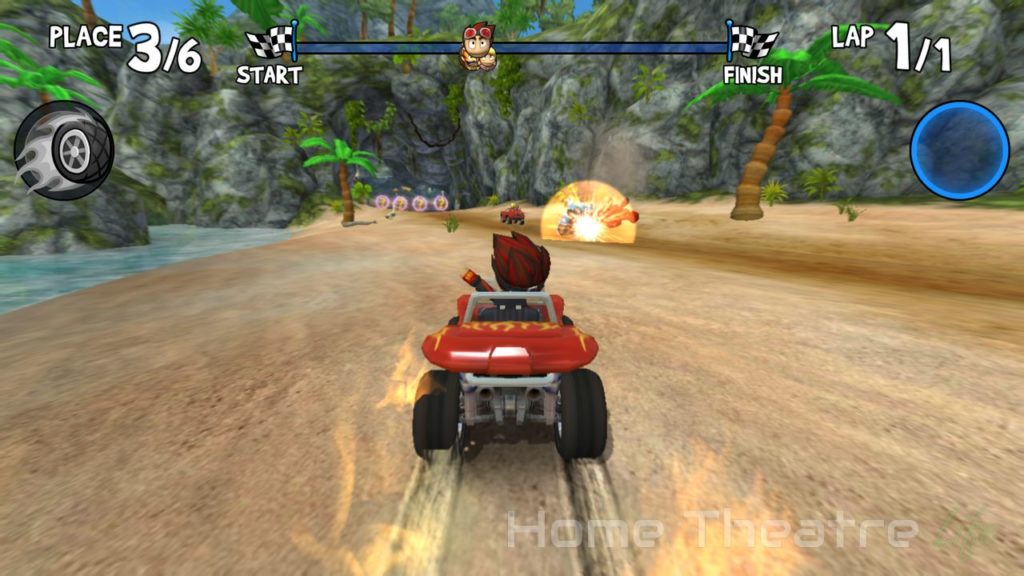 Pairing worked well on various Android smartphones and Android TV boxes that I tested. You just need to select the 8Bitdo NES30 Pro from your device’s Bluetooth menu.

Most games recognised the controller immediately, such as Beach Buggy Racing, and I had no issue mapping buttons in all the emulators I tried. I did have an issue with Asphalt 8 however, which kept detecting it as a keyboard. It seems to be a bug with the controller’s name so I’ve reached out to 8Bitdo to see if they’re going to release a fix. The 8Bitdo NES30 Pro supports XInput, allowing it to be detected as an Xbox 360 controller. However, those hoping to use XInput over wireless are out of luck, as it’s only supported over USB.

That being said, once plugged in, Windows 10 automatically detected it as a Xbox controller and I was able to use it in games such as [amazon text=Sleeping Dogs&asin=B00QMF4H7E] without issues. I really like the 8BitDo NES30 Pro, not just for 8Bitdo’s gaming passion that shines through but also because everything the controller is capable of. It’s not flawless but what issues it does have are made up for with character and flexibility.

I love that 8BitDo have crammed a full set of controls on to the NES30 Pro’s tiny frame, making it an excellent portable controller. Firmware updates and extended firmware is just awesome, as you’ll always have a compatible controller on hand.

It’s not perfect however. The tiny analog sticks feel too small the positioning of the L2/R2 buttons means the shoulder buttons aren’t as comfortable as the traditional stacked layout.

If you want a portable controller you can take anywhere, is super flexible or love the Retro feel, the 8BitDo NES30 Pro is fantastic. However, gamers who don’t need the portability may be better off with a full sized controller.

The 8BitDo NES30 Pro is available from GearBest.