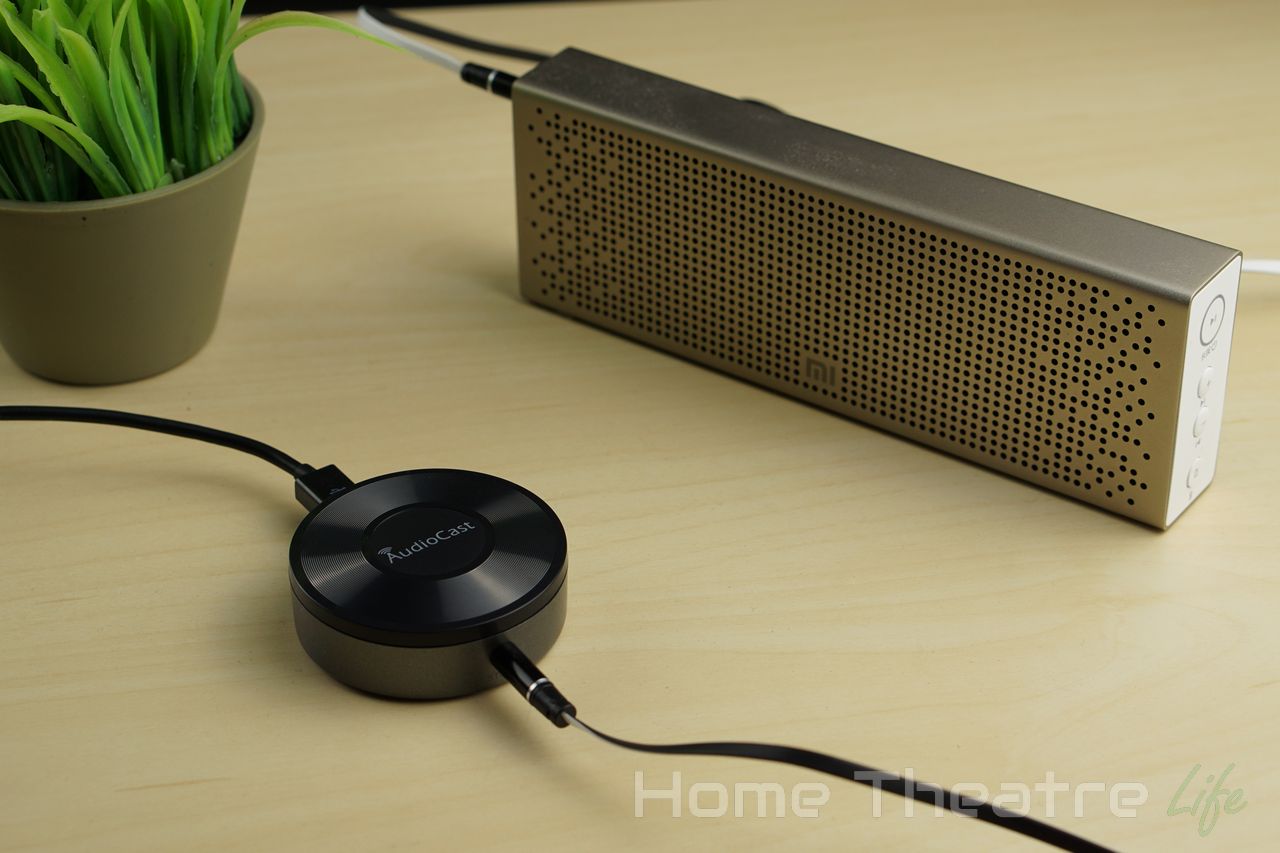 The AudioCast M5 is a compact music streaming device in the same vain as the popoular Chromecast Audio. By plugging in a speaker via the unit’s 3.5mm audio output, you can stream music to your speakers using a variety of standards – from Airplay to Spotify. 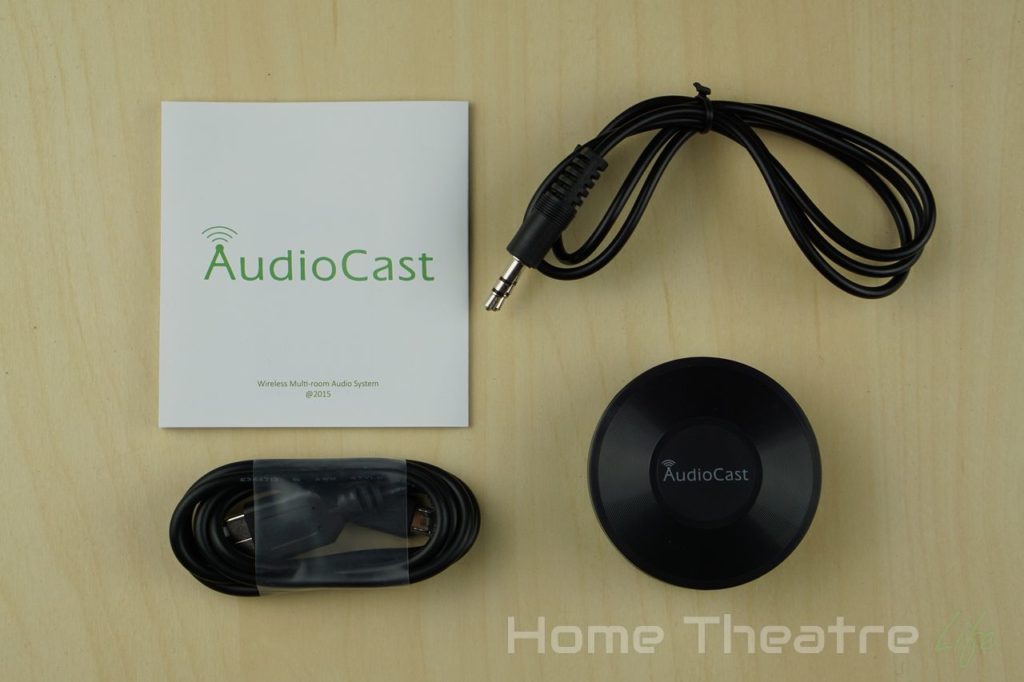 Inside the box, you get the basics to get connected:

You’ll need to bring your own power supply. However, the AudioCast M5 runs off a standard 5V power source so pretty much any USB port will do. 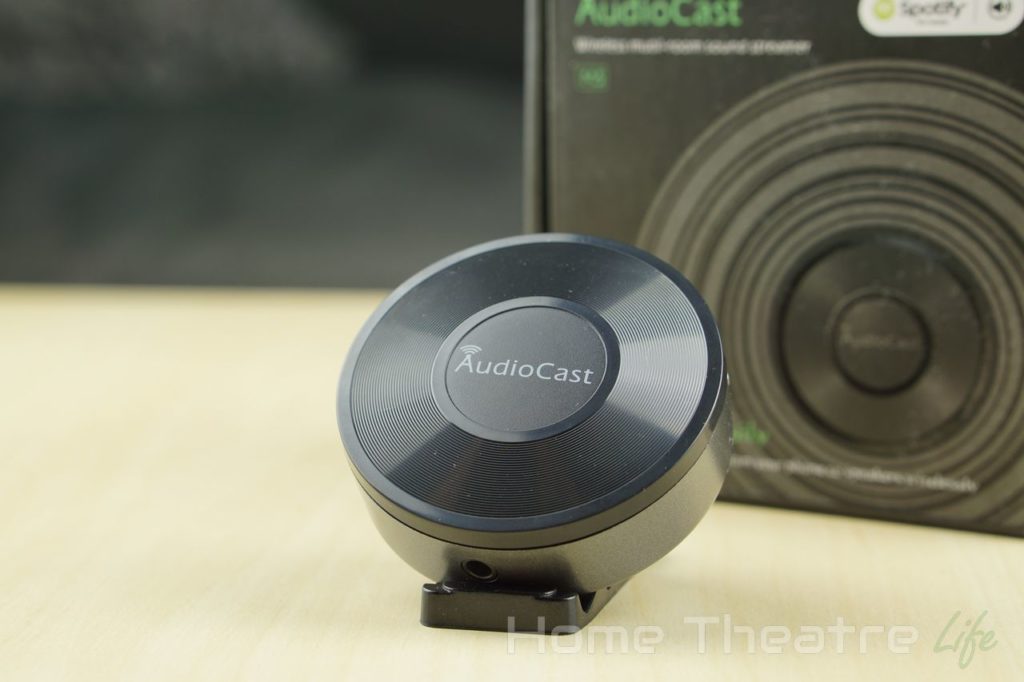 This thing is tiny. I previously reviewed Uyesee’s SoundMate WM201 and that unit was compact but this is another level. With a diameter of just 55mm, the AudioCast M5 is barely bigger than a coin and can be easily hidden.

The unit feels solid and well made, much like Uyesee’s previous music streamer, the SoundMate WM201.

The AudioCast M5 is a minimalist device. There’s only a couple of ports and a single button on the unit. 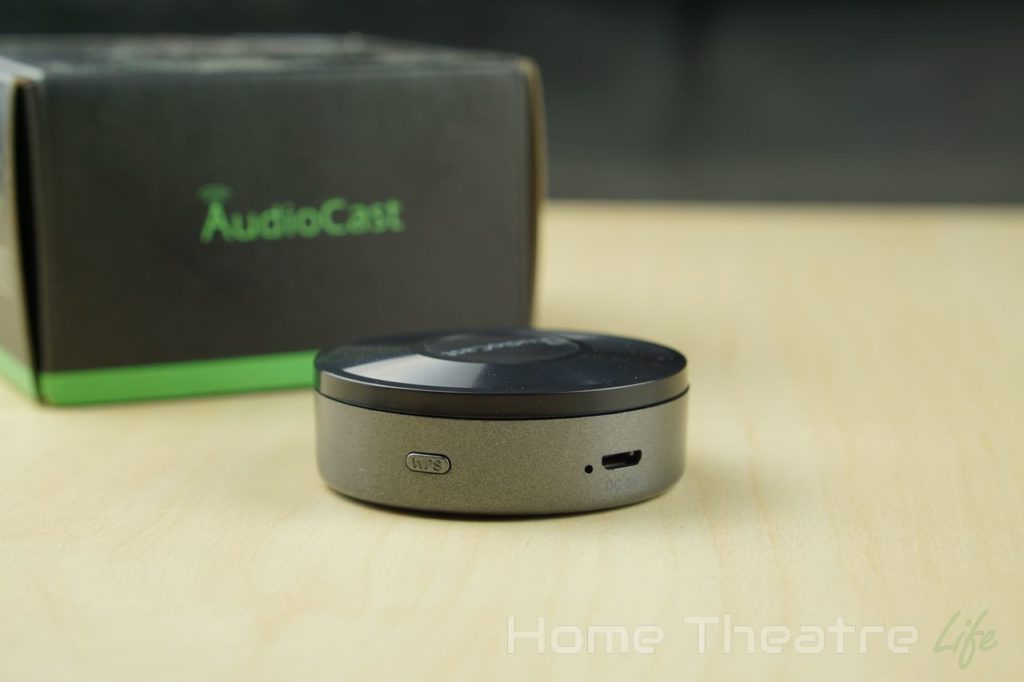 Going around the unit counter-clockwise, you’ve got the 3.5mm audio output, a WPS button for connecting the device to your wireless network, a reset button and a microUSB port for power. 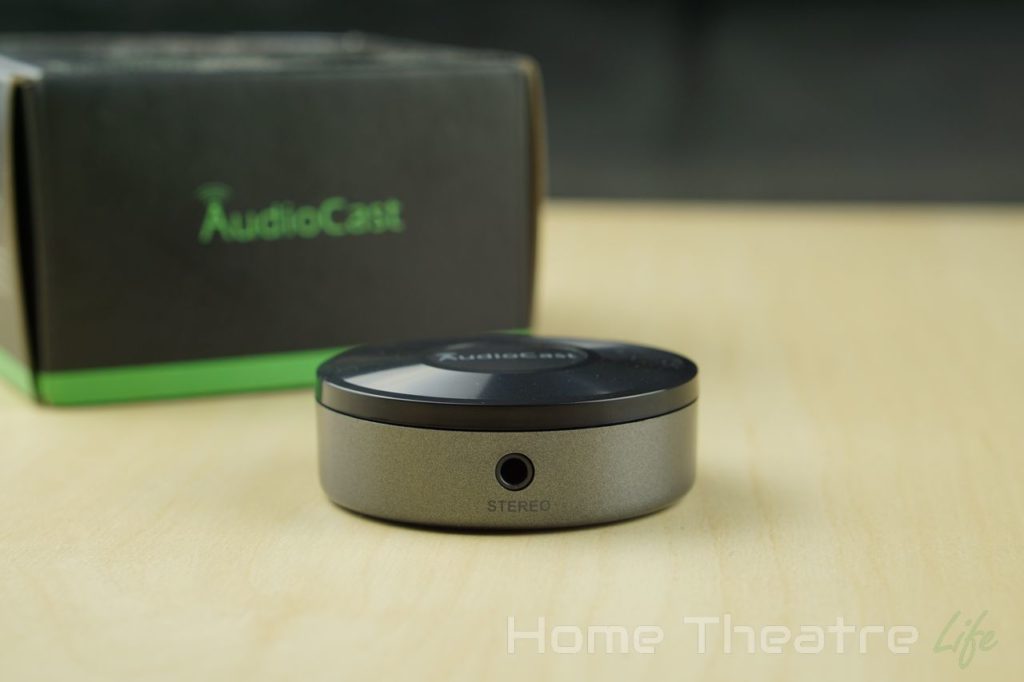 Having the micro USB port and 3.5mm audio output on opposite sides keeps things neat, though I can’t help but feel everything would look neater if they were next to eachother but that’s just personal preference.

Connecting the AudioCast M5 is as simple as plugging in a micro USB cable for power and plug in speakers via the 3.5mm audio output. Connecting the unit up to your network and playing music is handled entirely via the Audiocast app (available on both iOS and Android). It’ll guide you through the setup process. It’s all pretty straightforward.

The app’s actually your main interface to the AudioCast M5. It handles pretty much everything – from choosing music to updating firmware. 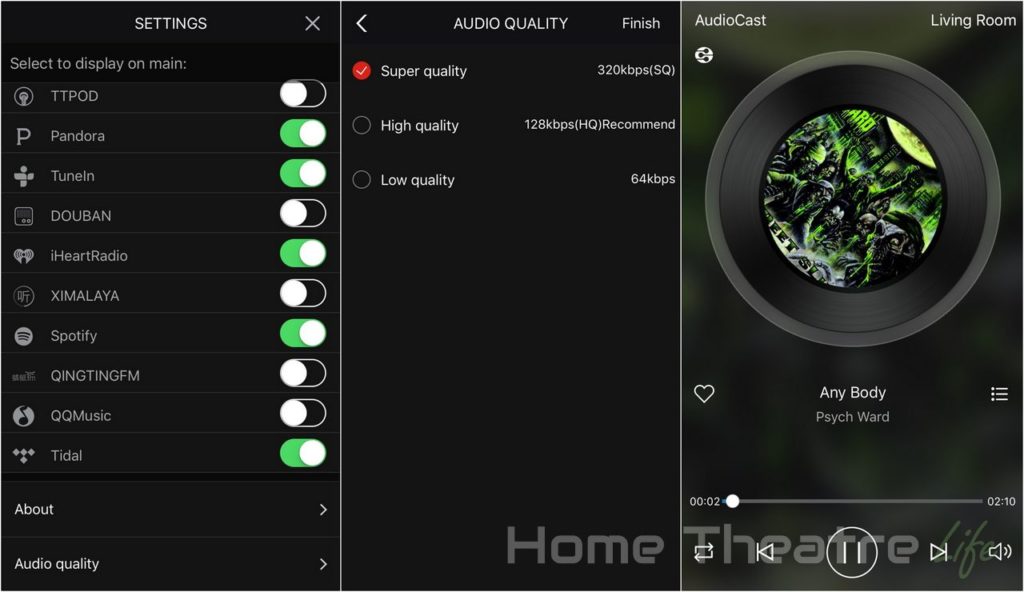 Speaking of firmware, when I first set up the unit, I was prompted to download an update. After a quick download, the firmware was installed automatically with the progress displayed in the app.

The app is fairly intuitive and looks reasonably good. Music sources are listed in the panel on the right, including your smartphone, DLNA servers on your network and music services such as Spotify, Pandora and even Tidal. Apple’s AirPlay is also supported by choosing the AudioCast as an AirPlay receiver. 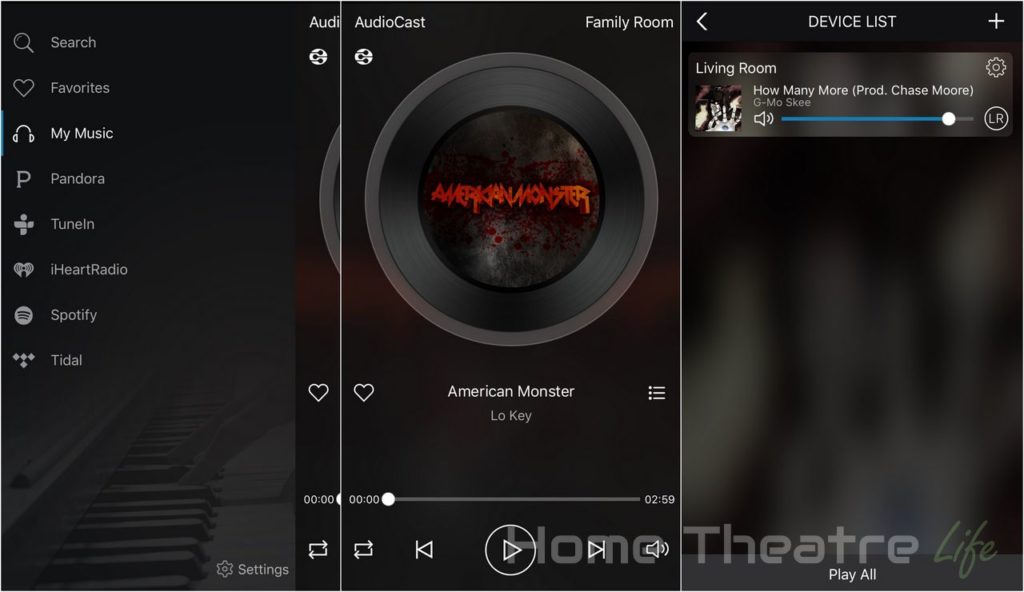 The app’s music player looks nice. Playing back music features the song details, with audio controls at the bottom. A spinning record player features cover art and a blurred version of the cover art as a backdrop which looks pretty cool.

As everything’s controlled over wifi, there’s a slight delay between choosing an action in the app (i.e. playing a song or playing/pausing a track) but it’s only a fraction of a second. 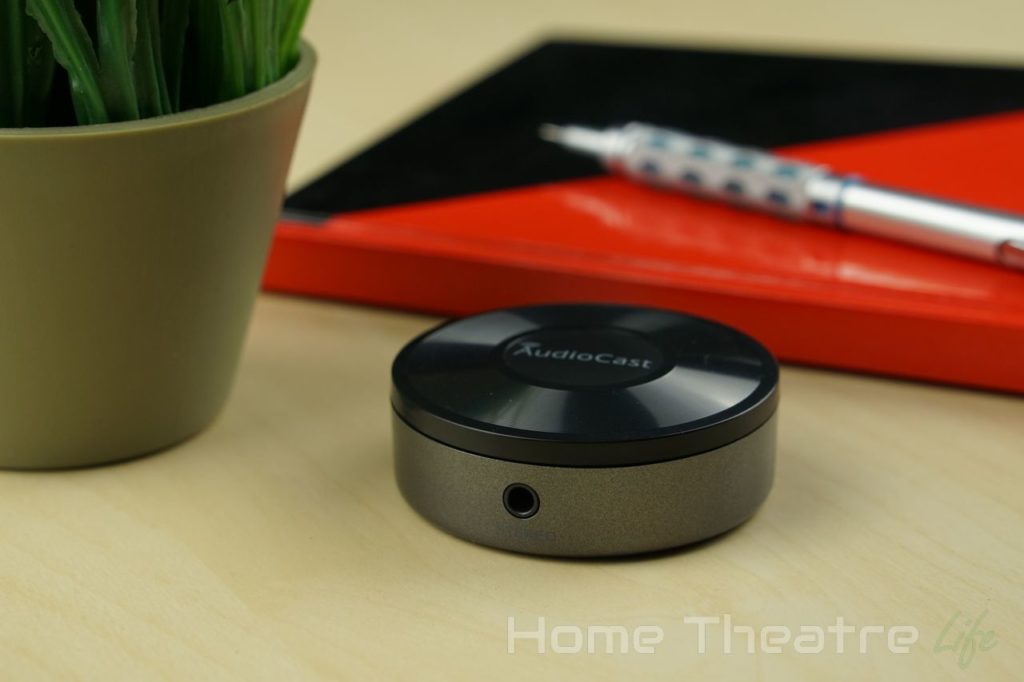 Multi-room audio is supported if you’ve invested in a couple of units (up to a maximum of 8). By navigating to the device list, you can tap and hold one of the devices and drag it over the top of another one to sync the two up. Unfortunately, Uyesee only send me a single unit so I couldn’t test it out for myself. However, the company has provided a demo video:

Audio quality seemed good. I didn’t notice any degradation in my music when playing via the AudioCast M5.

I did have the odd glitch here and there as is typical with streaming devices. On a couple of occasions, hitting play occasionally did nothing and required me to reselect the track in order to get it to play.

There’s also some unusual design choices in the app which makes things confusing. The back arrow doesn’t always behave like you’d expect (i.e. hitting back when music’s playing goes back to the main menu rather than the track select screen) and there’s a “Preset Content” tab that has no clear indication what it’s actually for. That said, these are minor issues and can be fixed in future versions of the app.

Obviously the most important part of a music streamer is how well it plays music. Thankfully, the AudioCast M5 did a great job playing back my sample tracks.

Whether playing music via AirPlay, DLNA or streaming music straight from my phone, everything seemed to work pretty much flawlessly, aside from the rare occurance where a track didn’t play.

The main thing I experienced was some buffering on my 96kHz 24-bit lossless sample initially. However, playback was fine after first few seconds so it seems to be related to filling the buffer than an issue with the unit itself. In terms of supported audio formats, the most common formats were supported. Apple’s lossless ALAC doesn’t appear to be supported via the app. They simply didn’t appear.

Not being one for leaving things alone, I decided to fire up BubbleUPnP to see if that would allow me to stream my ALAC files from my phone via DLNA and it worked. Standard 44.1kHz ALAC files played back fine, however the more demanding 96kHz ALAC files played too slow – sounding closer to a musical nightmare than anything else.

Should You Buy One? 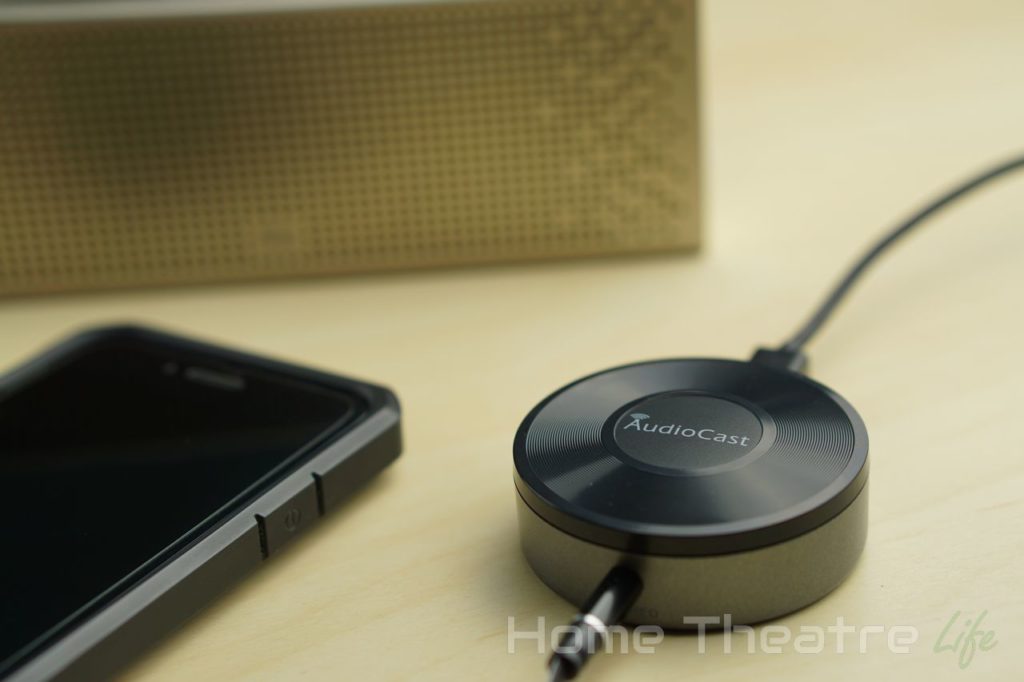 The AudioCast M5 does what it says on the box and generally does it well. Though the app can be a little janky at times, music playback generally performed well – particularly if your music collection is in the most common formats.

However, going up against devices such as Google’s ChromeCast Audio puts it in a tough position. If you need AirPlay or native DLNA support, the AudioCast has you covered though Google’s solution, whilst being more limited, may be more appealing for some.

The AudioCast M5 is available from [amazon text=Amazon&asin=B01N5FOVAJ] and AliExpress for around $35-$40.

AudioCast M5
The AudioCast M5 is a great little music streamer packed with features, though it's going up against tough opposition from the likes of Chromecast Audio
Pros
Cons
7.6