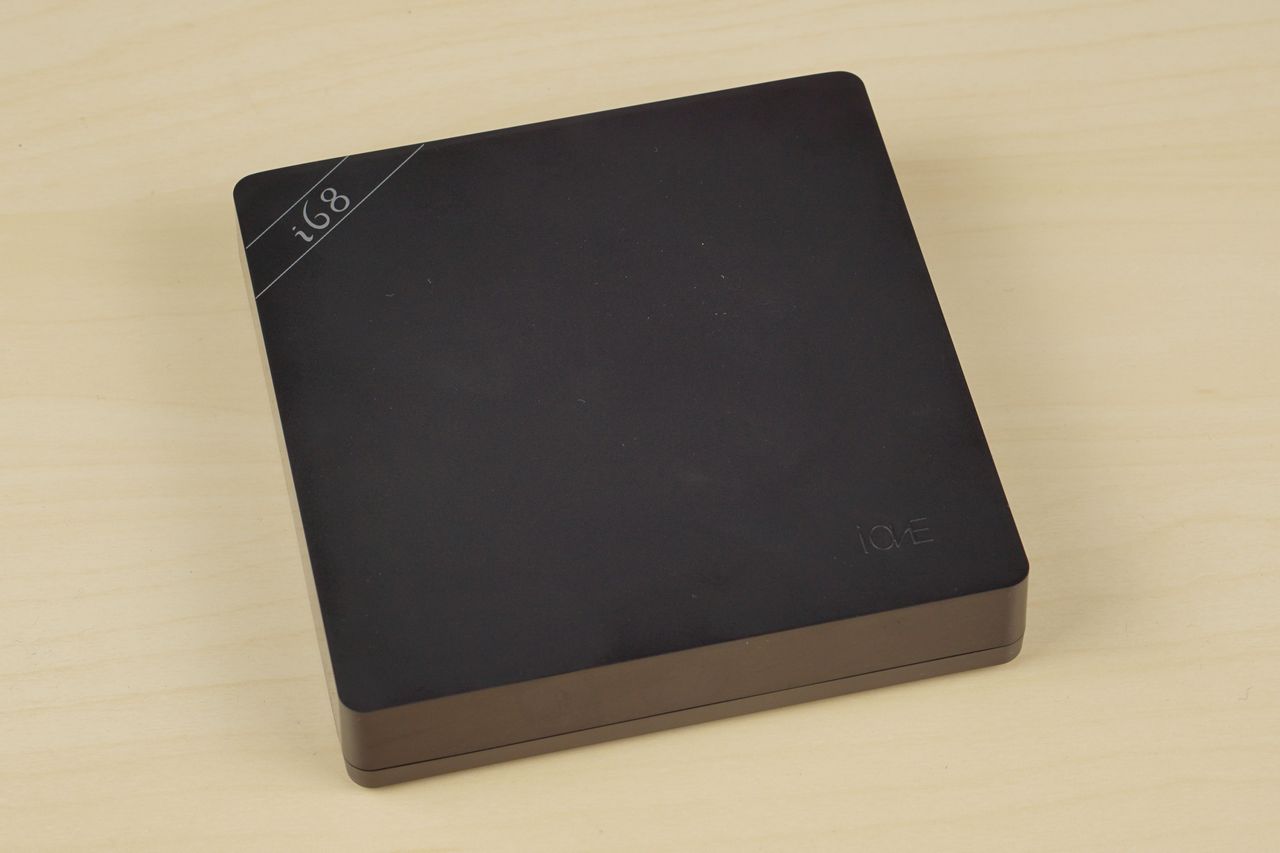 I want to say thanks to GearBest for providing a sample for me to review. Use coupon “GB68” via the button below to get the 2Gb model for just $72.99. 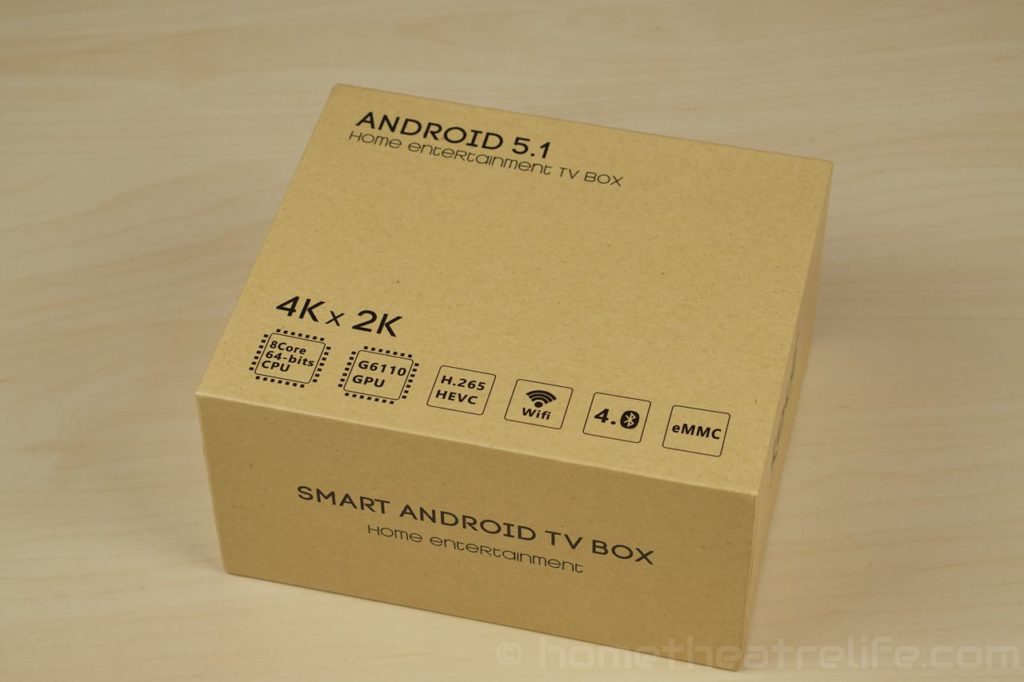 Beelink have provided a solid set of inclusions inside the box: 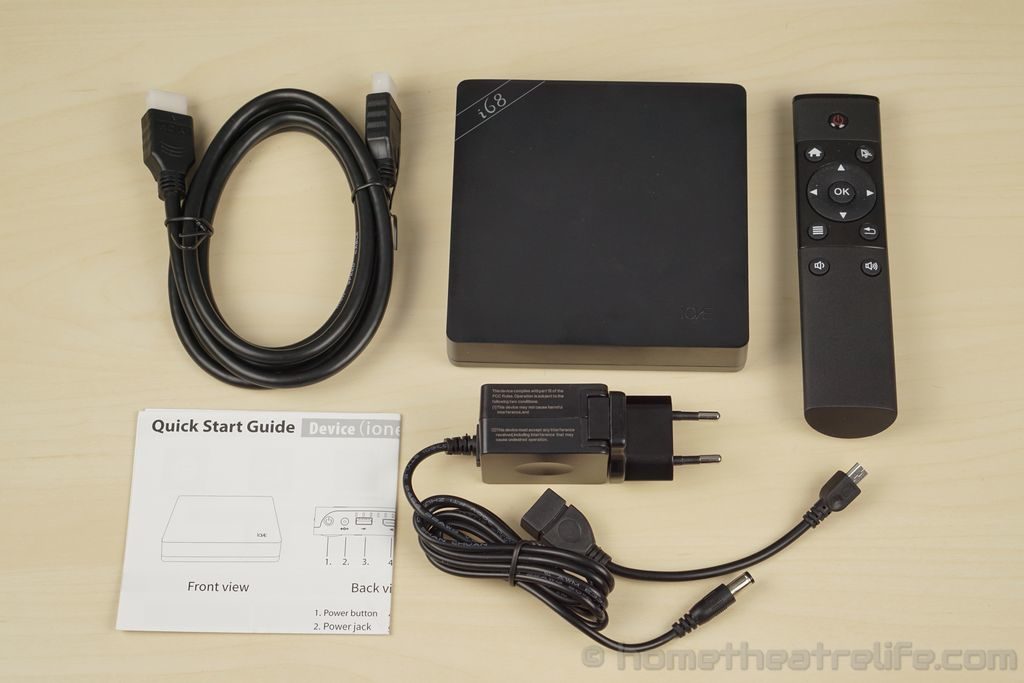 The Beelink i68 isn’t about to set the world on fire with its design. It’s a minimalist black square that’s unobtrusive but doesn’t stand out against all the other black square Android players in the market. The back and side of the unit house all of the ports. On the back, from left to right, we have the power button, DC power input, HDMI, Ethernet and optical audio. 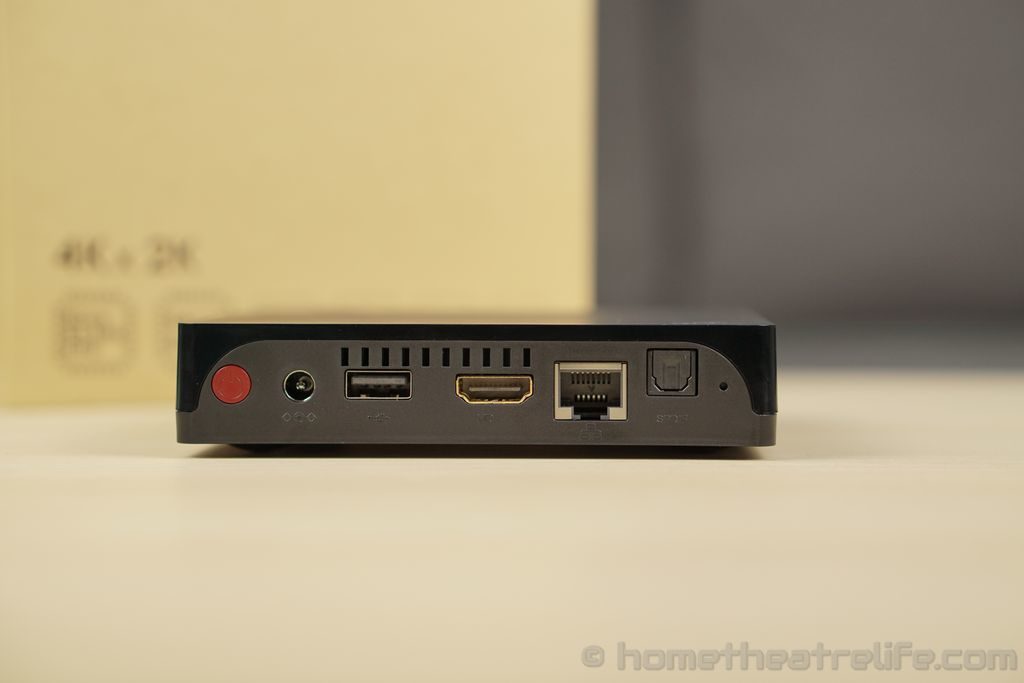 Moving to the side, there’s a fullsize SD card slot, 2 USB 2.0 ports and a micro USB OTG port. Beelink have also added a couple of small vents to assist with passive cooling. The included remote is basic but does the job. It’s responsive and can power the unit on and off. It’s also got mouse control but only via the directional buttons so it’s not the best experience. I also would have loved to see some media playback controls on there. 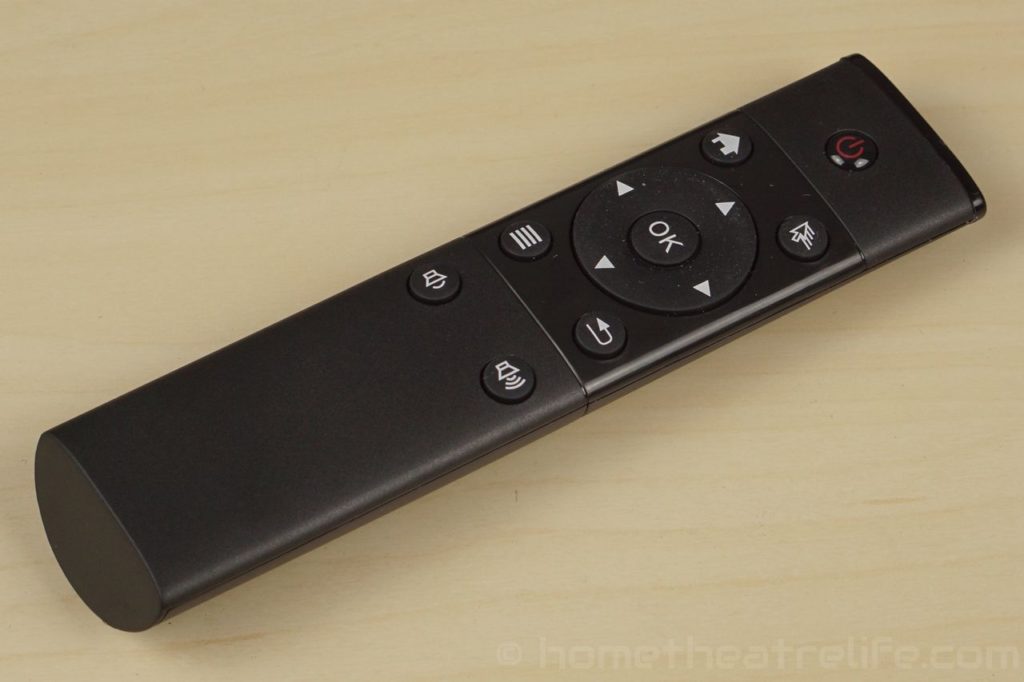 To boot the Beelink i68, you use the power button located  on the back. Booting times are respectable at around 27 seconds, whilst resuming from standby is essentially instant.

On first boot, the resolution was correctly set to 1080p. I did need to fix the overscan in Settings however to get the image to fill the screen. 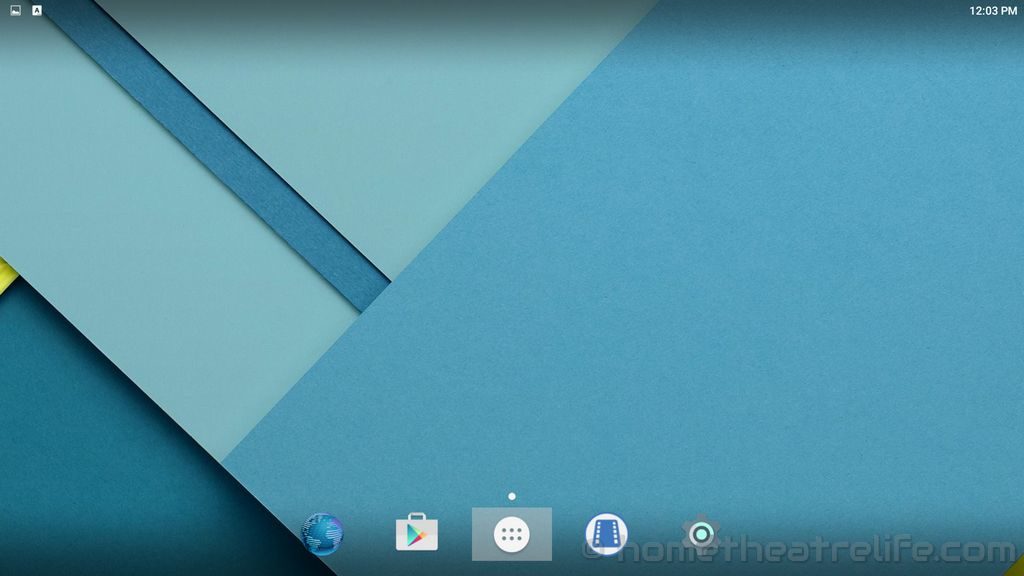 There are a couple of preinstalled apps like Netflix and a customised version of Kodi that features some preinstalled addons. Some of these addons were for adult content so I’d recommend you do a bit of a cleanup if you’re getting the unit for your kids. The Google Play store is pre-installed, making it easy to install your favorite apps.

I have to admit I’m disappointed that there’s not a TV-friendly launcher included like we’ve seen on other devices, as these tend to make it far more suitable for TV use than the stock Android launcher. The Beelink i68 isn’t rooted out of the box so you’ll need to figure out how to root it yourself if you need this functionality.

Overall, the software was pretty stable. I only experienced 1 crash that needed me to reboot the device.

Media playback was tested using both the preinstalled version of Kodi and MXPlayer downloaded from the Google Play store. 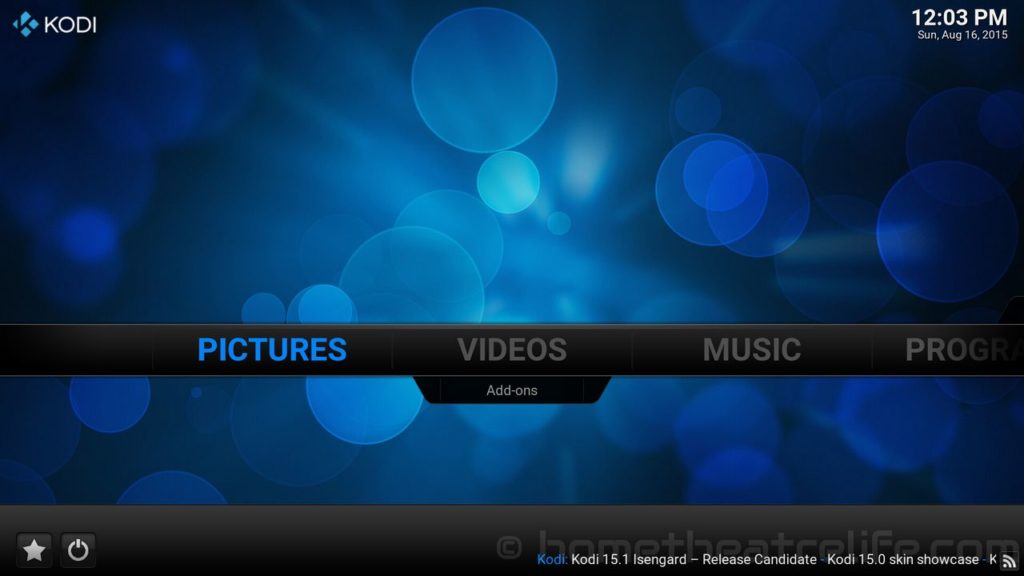 Video playback was generally pretty good across the board on the Beelink i68. The usual codecs tripped up the RK3368, namely my 1080p Hi10p sample. However, hardware decoding for this codec is incredibly rare so I can’t be too critical here.

I did experience a rare but occasional skipped frame on my 1080p HEVC sample which caused the video to feel jerky when it happened. It was distracting but the video was still watchable.

I was able to plug in my USB drive and 2.5″ HDD and play videos without any issues, with both automatically mounting when plugging them in. I really liked that Beelink added a “Safely Remove” button in the notification shade, making it quick and easy to remove connected drives.

The Beelink i68 is the first Android TV box I’ve tested using the RK3368.  In their new SoC, Rockchip has opted for a PowerVR G6110 GPU and I was curious to see how it would stand up to other SoC GPUs.

Thankfully, the gaming experience was great. At 1080p, Jetpack Joyride was a pleasure and I didn’t notice any framerate drops. Similar, Beach Buggy Racing on maximum settings was consistently smooth and maintained a solid framerate. 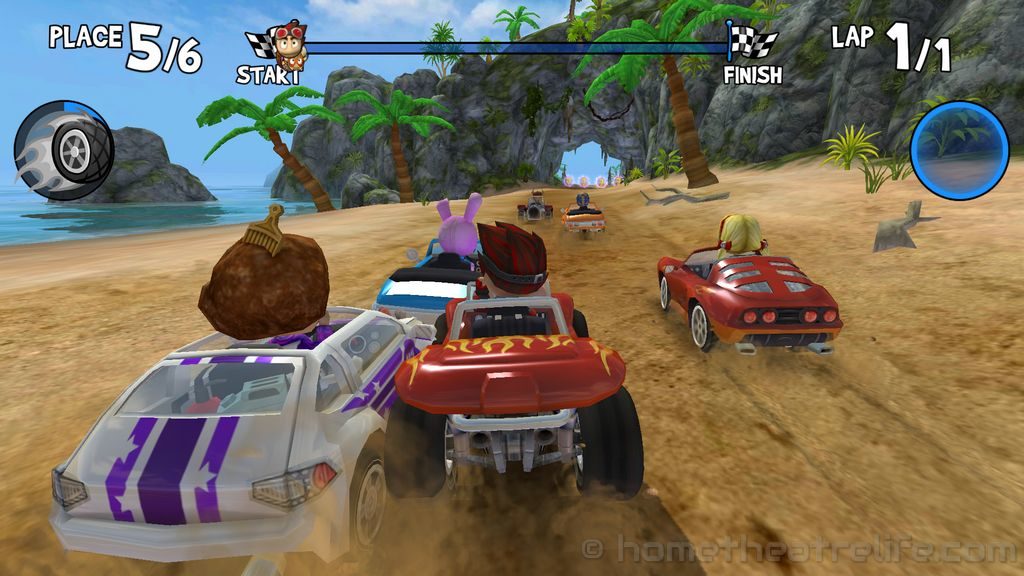 I was able to pair my iPega PG-9025 Bluetooth controller to the Beelink i68 without any issue and use it to play Beach Buggy Racing.

The Beelink i68’s wireless performance was good, with download and upload speeds of 39.4 and 13.0 Mbps respectively. 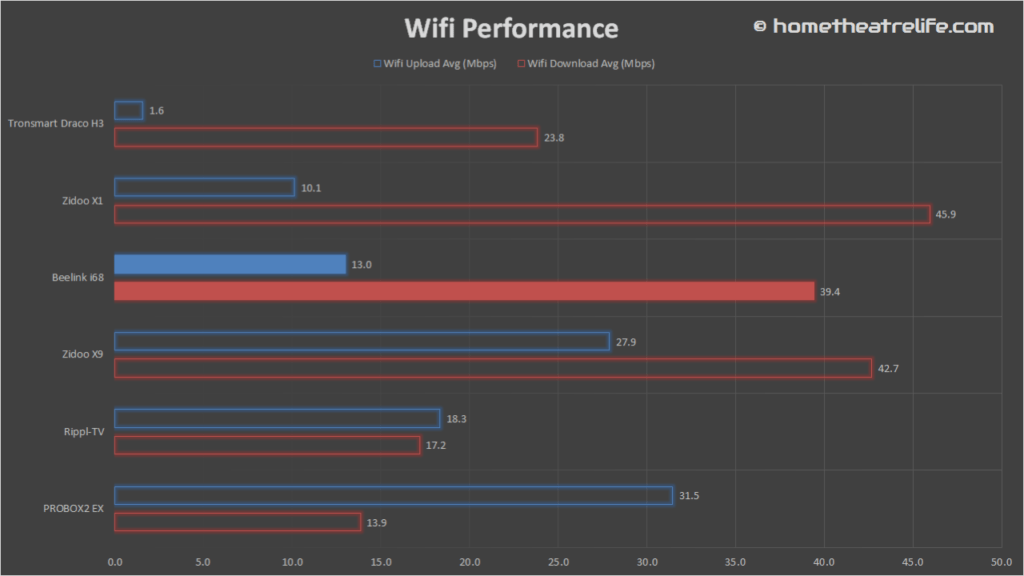 During actual use, I was able to stream 4K and 1080p video samples from an NFS share on my server without noticeable buffering. YouTube also streamed well to the unit via WiFi.

Ethernet performance was close to the specifications, achieving download and upload speeds of 95.5 and 96.2 Mbps respectively. 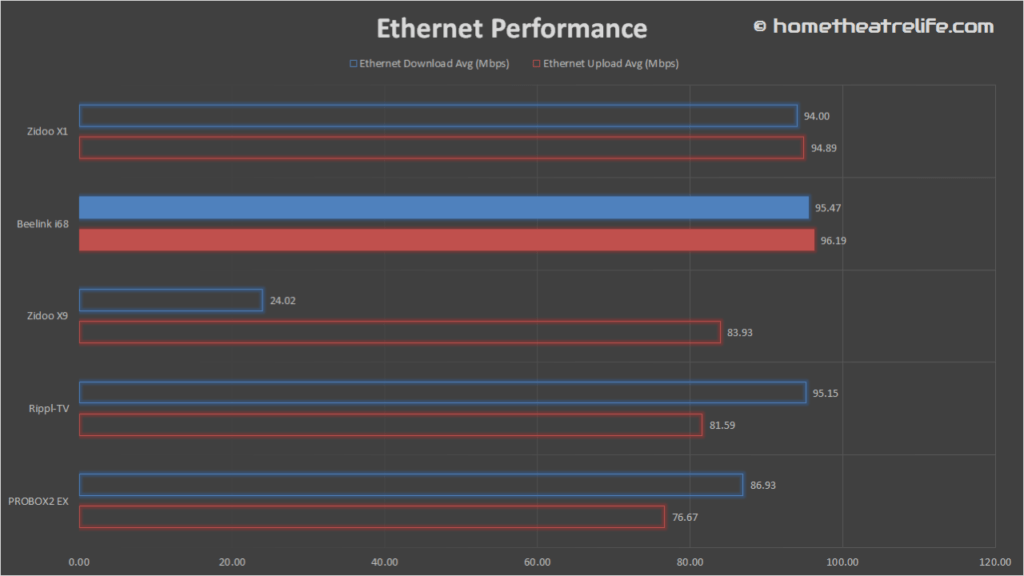 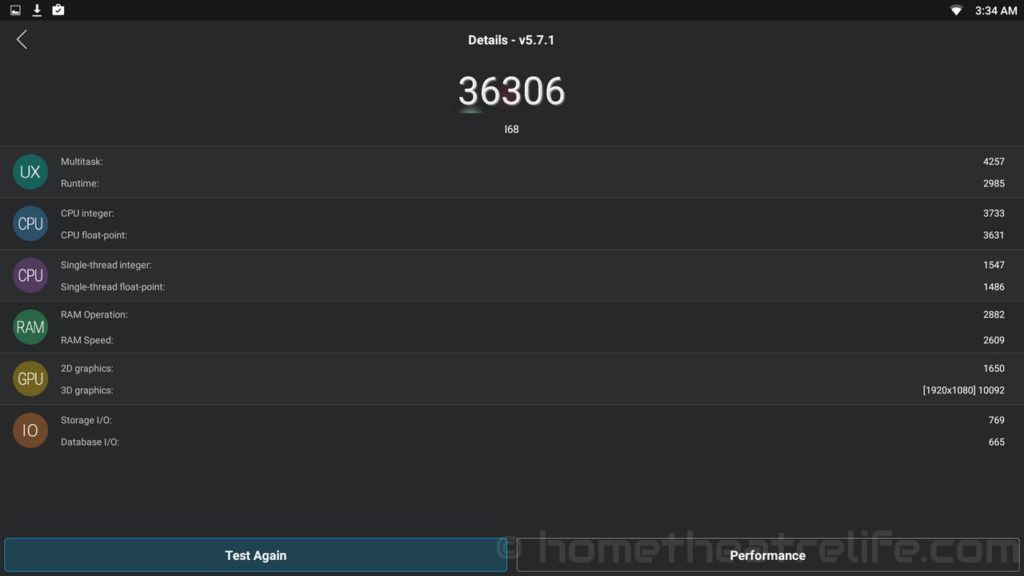 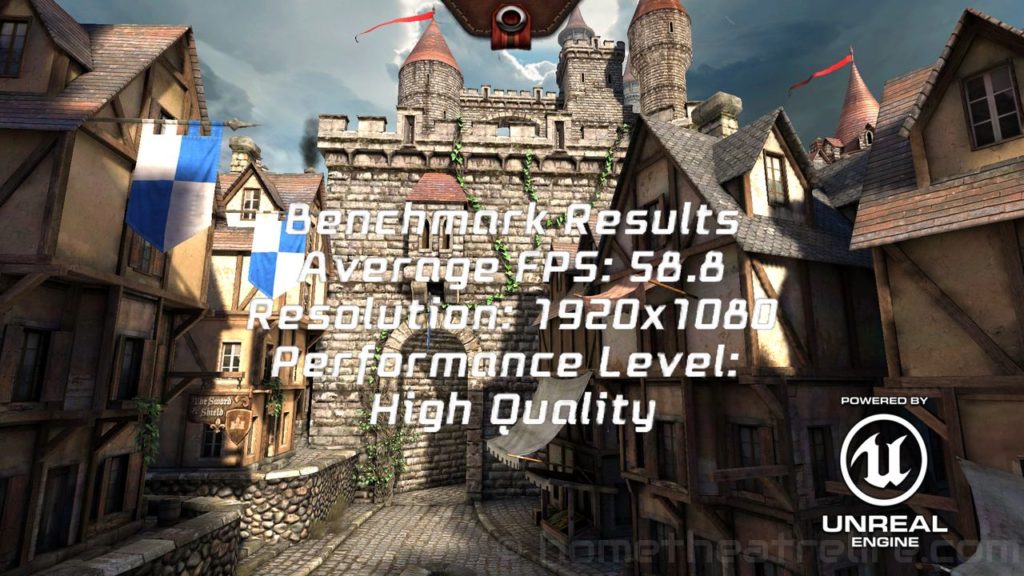 On 3DMark’s Ice Storm Extreme benchmark, the i68 achieved 5096. It’s clear that the PowerVR G6110 isn’t as powerful as the Mali T764 in the RK3288, but how much this impacts gaming depends on the games you play.

RAM and Storage (A1 SD Bench)

Internal memory read/write speeds were around 21.7 and 16.3 MB/s respectively. RAM copy speed was one of the fastest I’ve seen to date at 2647 MB/s.

Power consumption on the Beelink i68 was pretty good, peaking at just under 6W during benchmarking.

The Beelink i68 is a fairly solid Android TV box. Whilst its design isn’t exciting, it does run the latest version of Android and handled both video playback and gaming well, apart from the occasional glitch during my HEVC sample. At it’s price point, it represents good value as long as you are aware of its flaws.

You can purchase the Beelink i68 from GearBest. Use coupon “GB68” via the button below to get the 2Gb model for just $72.99.

Beelink i68
The Beelink i68 is a fairly solid Android TV box. The firmware is stable, it runs the latest version of Android and both media playback and gaming were fantastic. I would have loved to see some a TV friendly Android launcher however.
Pros
Cons
7