Home » Reviews » Blitzwolf BW-MP1 LED Projector Review: It’s Amazing How Much $100 Gets You 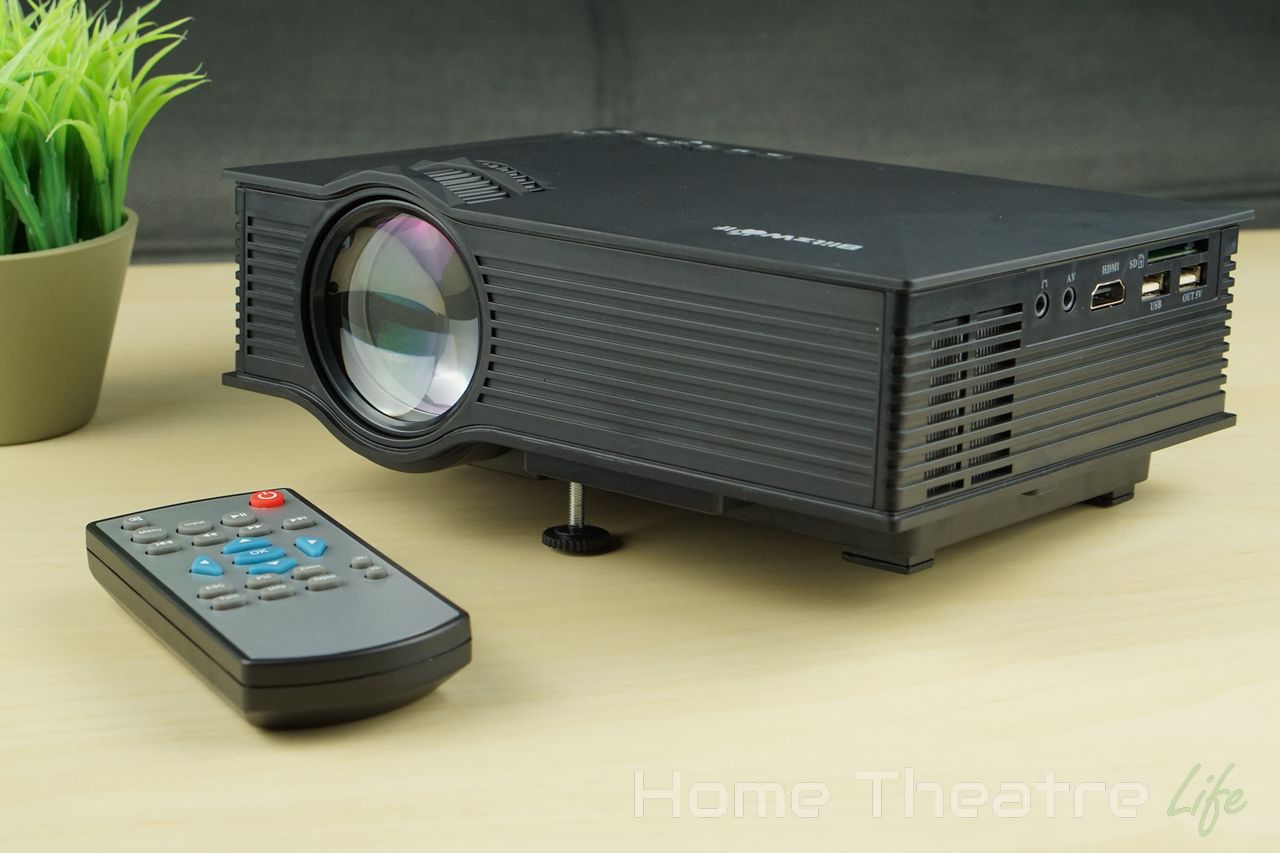 The Blitzwolf BW-MP1 is a small LED projector with a variety of intelligent features built in for under $100. Sporting an 800×480 pixel resolution, 1200 lumens of brightness and built-in wifi, is this the ultimate budget projector?

I want to say thanks to Banggood for sending me a sample to review. 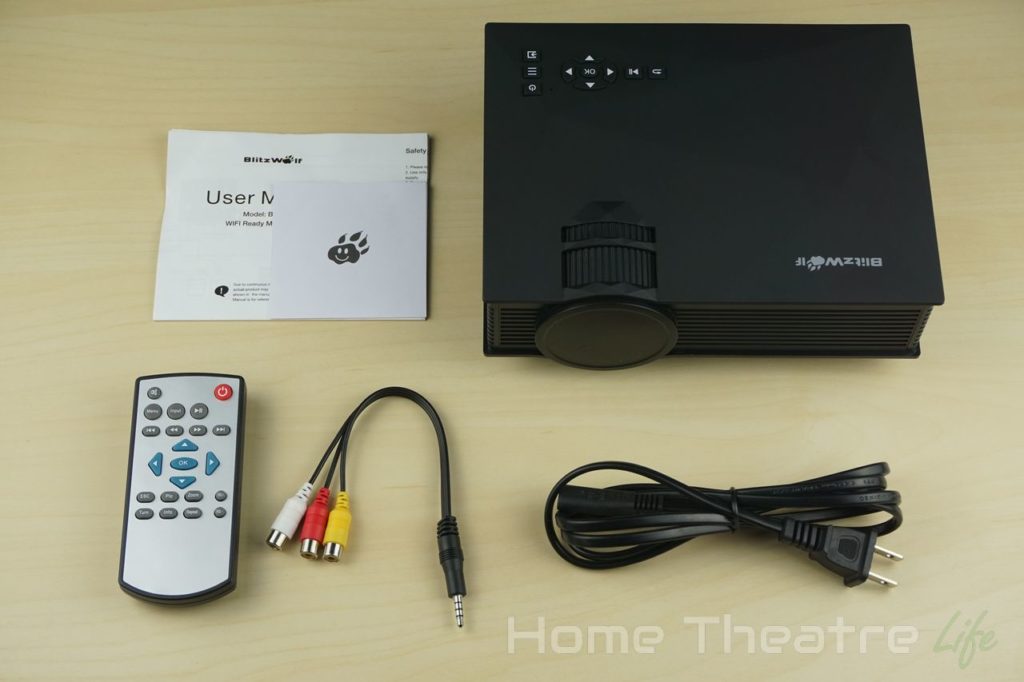 Blitzwolf have given you everything you need to get started: 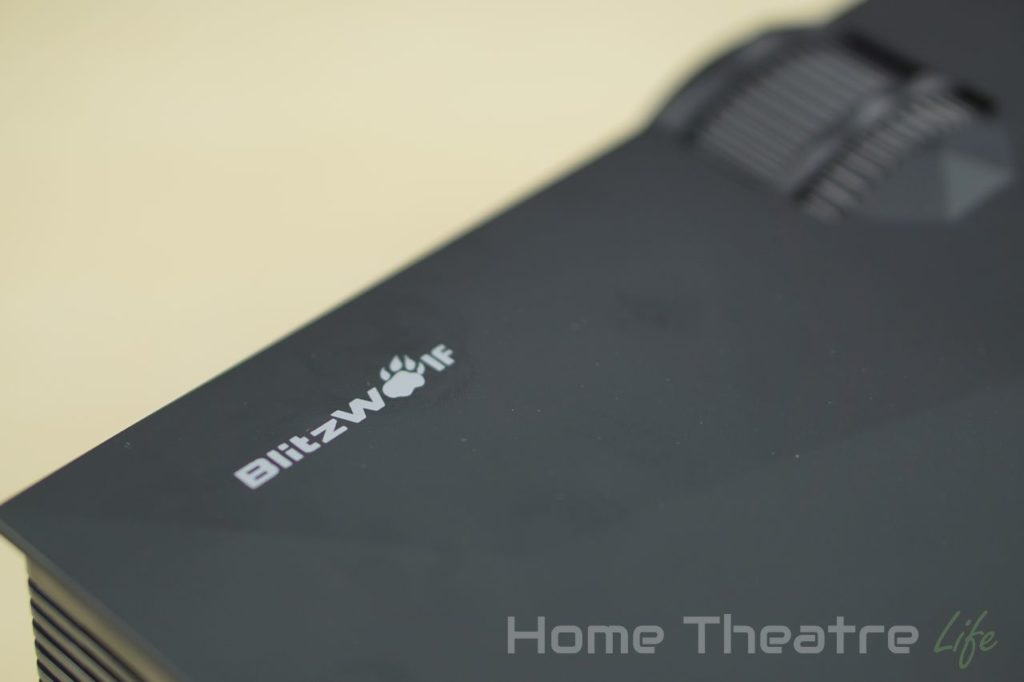 The front sports the unit’s large projector lens – protected by a rubber lens cap that’s only held in place by friction. As such, it has trouble staying in place and won’t grip unless the lens is fully retracted. I wish the company opted for a more robust system, particularly given that they’re positioning it as portable. 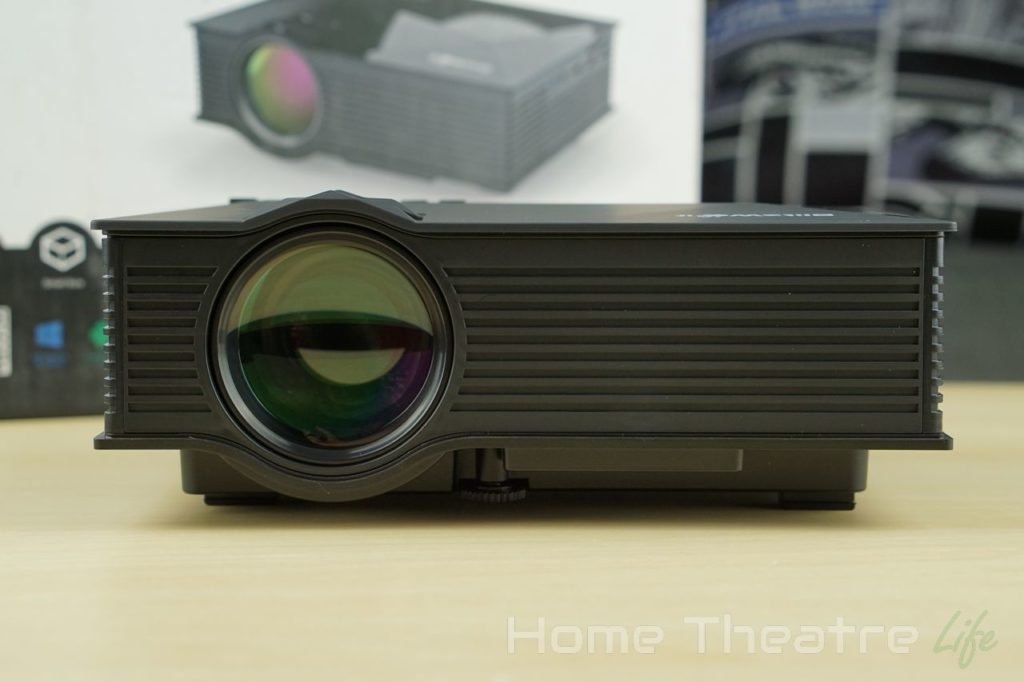 Just above the lens is two dials for focus and keystone correction to get the best  image possible. 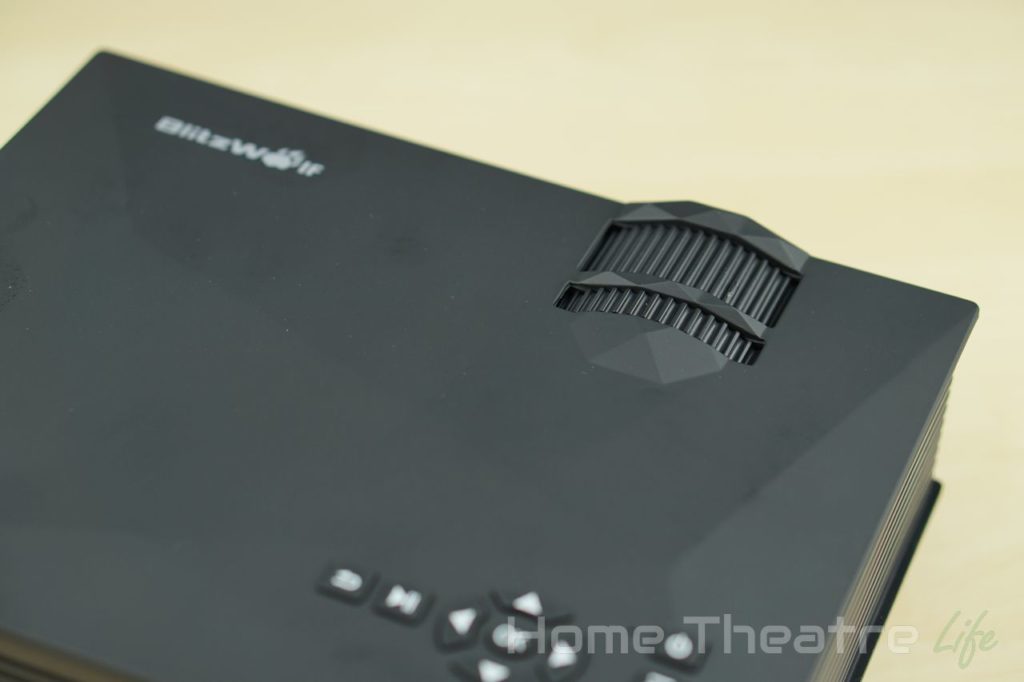 There’s also a set of controls on the unit for navigating menus and controlling media playback. 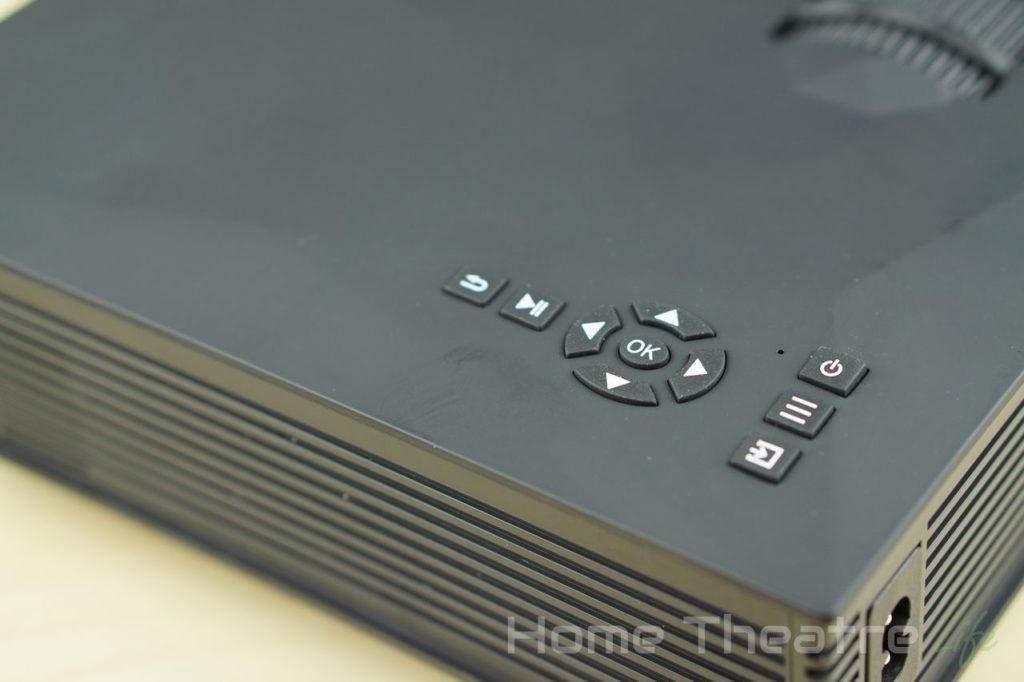 Ports are located on the right and rear sides. The right side features a 3.5mm audio output jack, composite video output, HDMI In, an SD card slot and two USB ports, although one can only be used for charging devices whilst the other can be used for media playback. 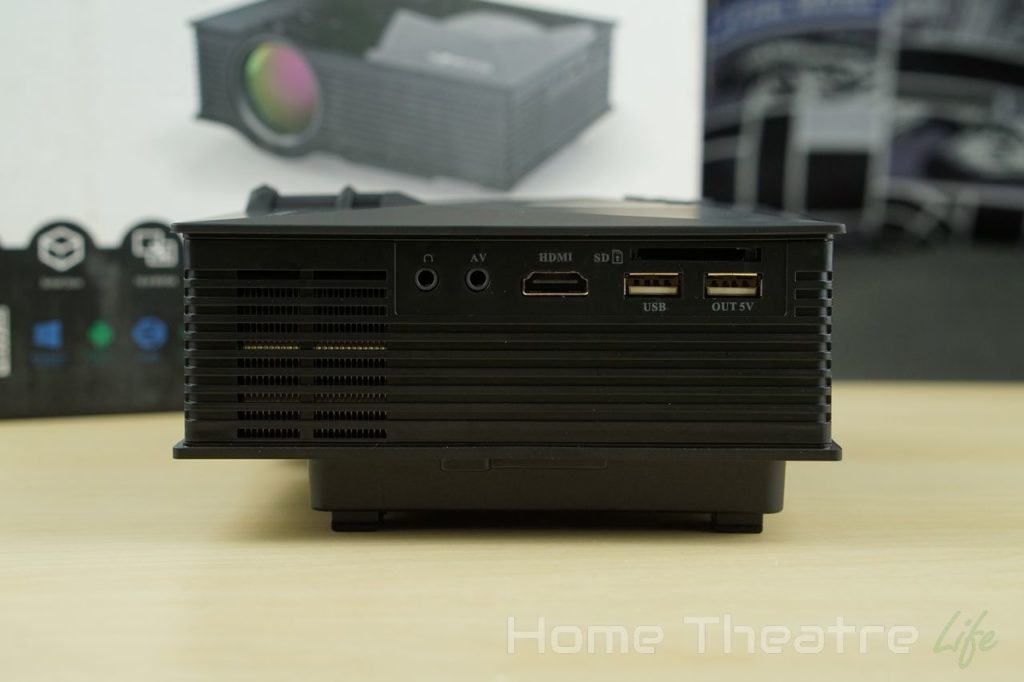 The back of the unit has an IR sensor and VGA port (tucked under the rear vent). 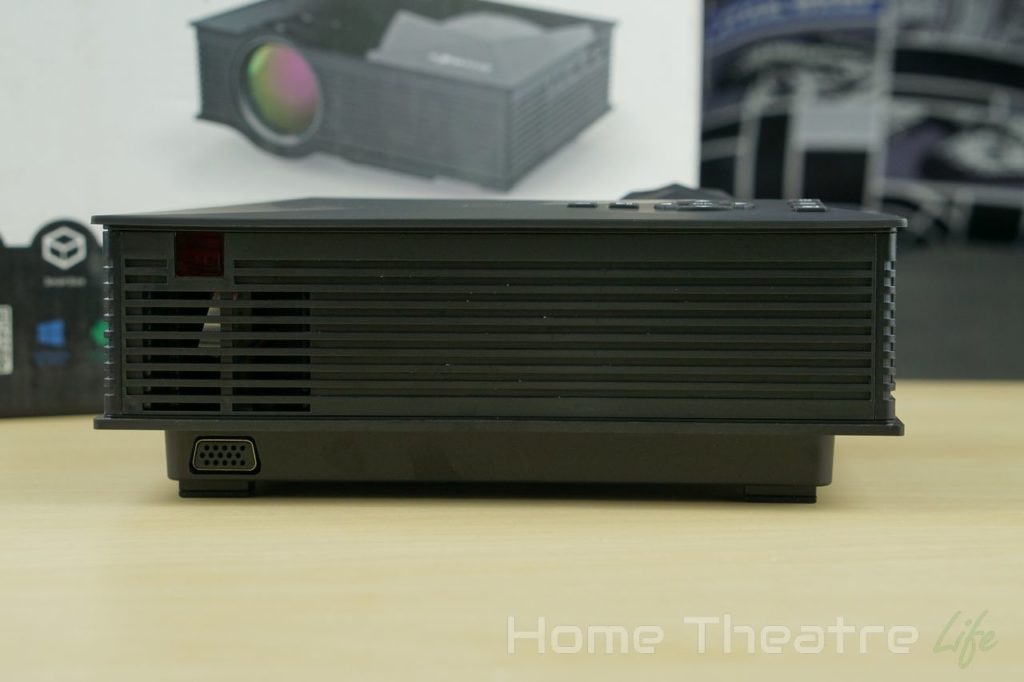 If you can’t mount  the projector directly in front of the screen, there’s a small riser that will allow you to angle the projector up. It’s a pretty handy solution to a common problem, particularly if you’re using it portably.

The projector is switched on via the post button at the top of the unit. It takes a few seconds to boot up before you see the menu.

The first thing you’ll notice is the sound of the fan that keeps the unit cool. It’s not exactly quiet so prepare to hear it during quiet scenes. However, it’s quieter than other cheap protectors such as the UNIC UC40.

The UI is exactly the same as the one seen in projectors such as the UNIC UC46. It’s bright and colorful, with separate tiles for movies, photos, music and text. 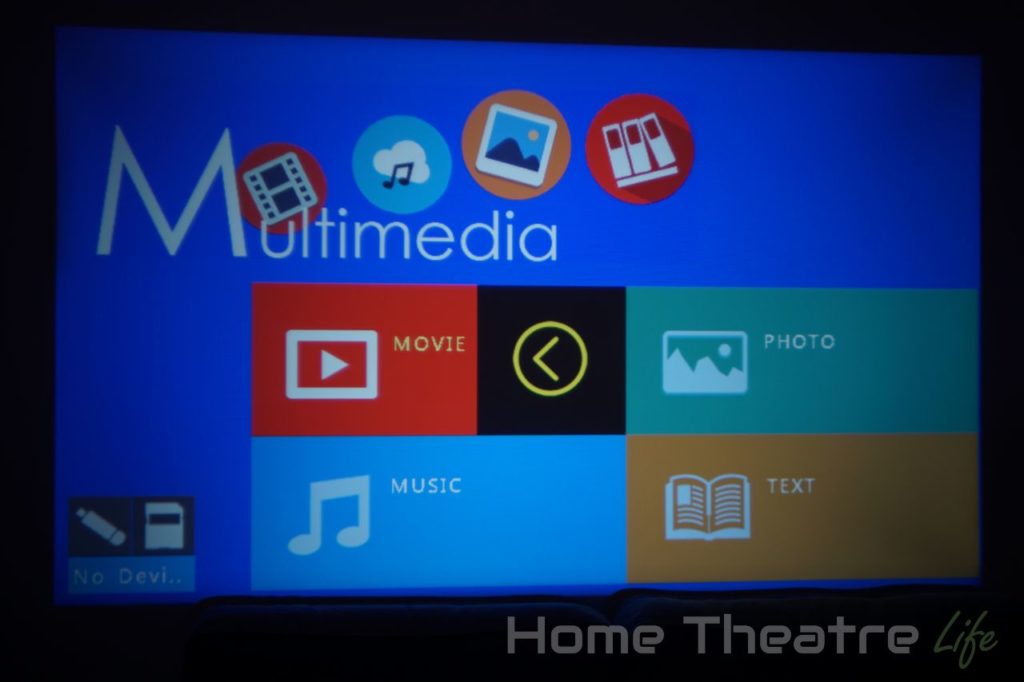 The file browser is functional but nothing special. Icons represent files and folders, though I wish the file/folder icons were more distinctive to make it easier to tell them apart. One thing that was frustrating (and was the same with the UNIC UC46) was that you need to press the play button to start playing a video as the OK button just adds it to the playlist. It feels like either OK or Play should be able to start the video. 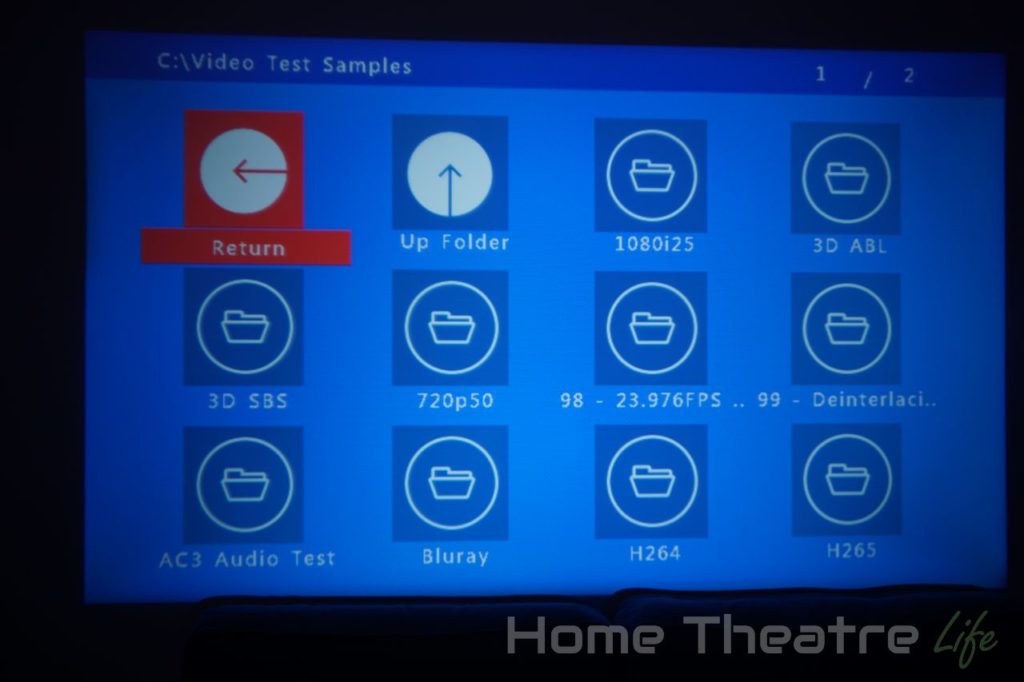 The unit’s media player handles the most common codecs well. I was able to play 30fps H.264 videos, MPEG2 and the like, though don’t expect more demanding videos to work. 4K H.264, H.265 and Hi10p samples didn’t play at all.

Also note that Dolby audio isn’t supported so those files play without audio. If you need Dolby audio, you’ll either need to transcode the files or add a dedicated media player. 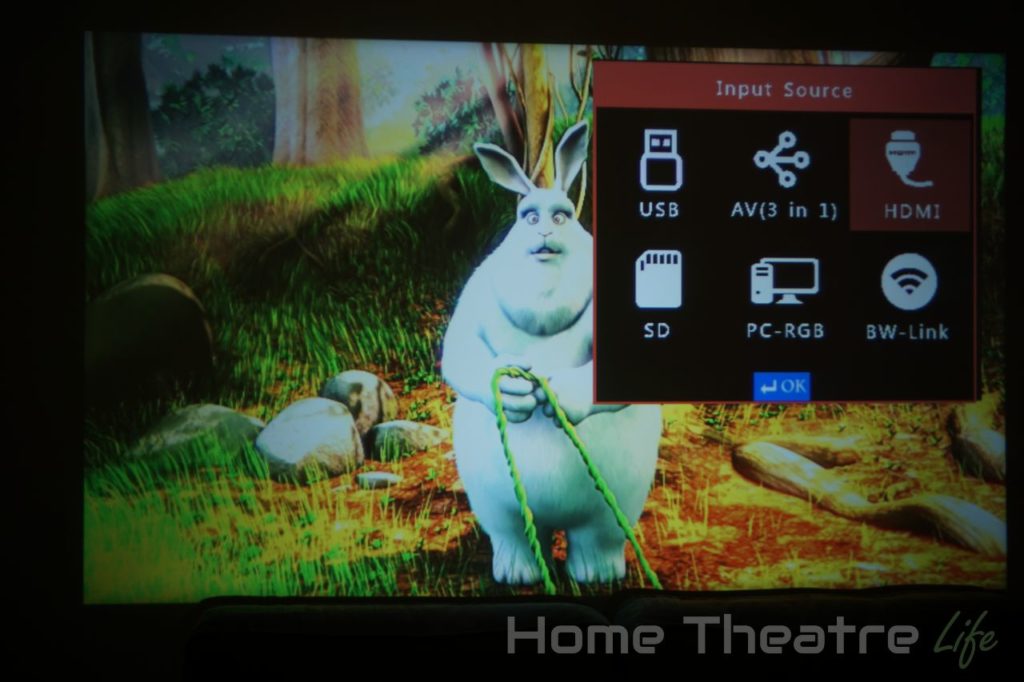 As with my other budget projector reviews, I’ll prefix this section by saying that it’s important to remember I’m talking about a sub-$100 projector and image quality won’t be as good as a proper home theatre projector. That said, they also cost significantly more so it isn’t really fair to put them face-to-face.

The Blitzwolf BW-MP1 claims to offer 1200 lumens of brightness but it isn’t enough to produce a bright image in a well-lit room. 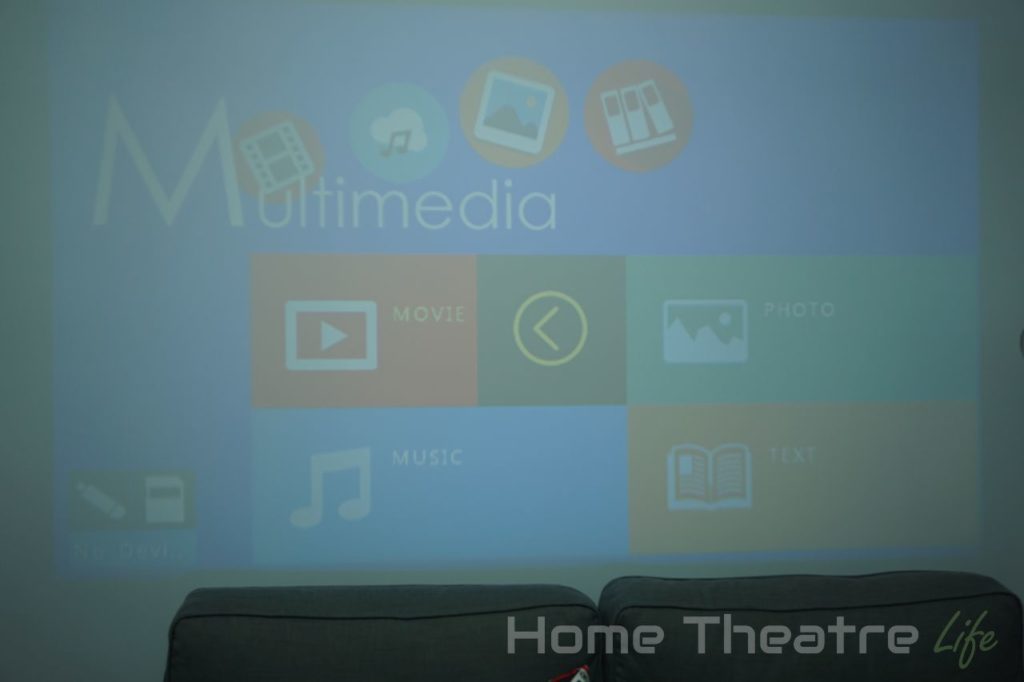 Turning off the lights makes a massive difference however, with a bright image with colors that are fantastically vivid.

Out of the box, picture quality is average with everything looking awful and oversaturated regardless of which image preset you choose. 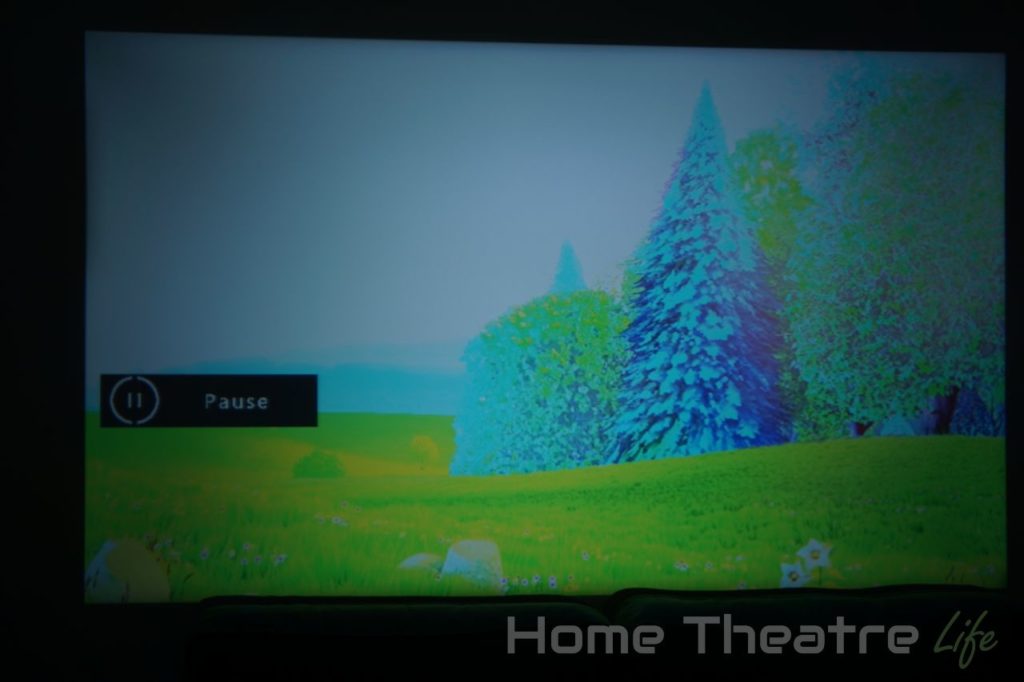 However, after adjusting the picture settings playing with the settings, I was able to get a really nice looking image, with lots of detail. 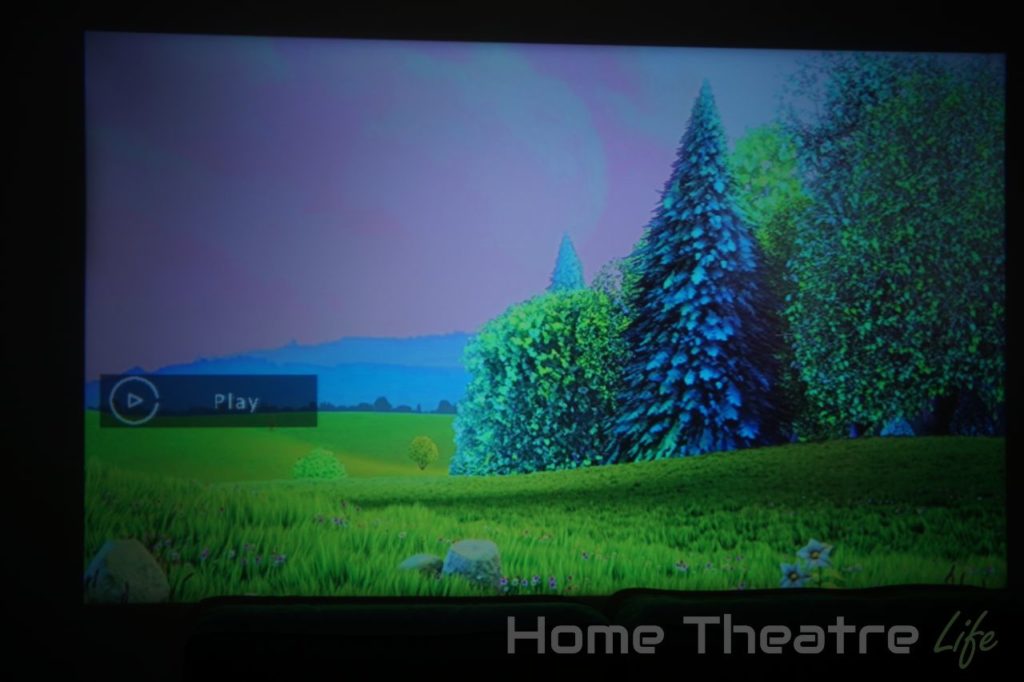 The projector’s 800×480 pixel resolution is on-par with DVDs. Most of you will be used to glorious 1080p so the drop in image quality can take some getting used to but there’s enough detail for movies or gaming. 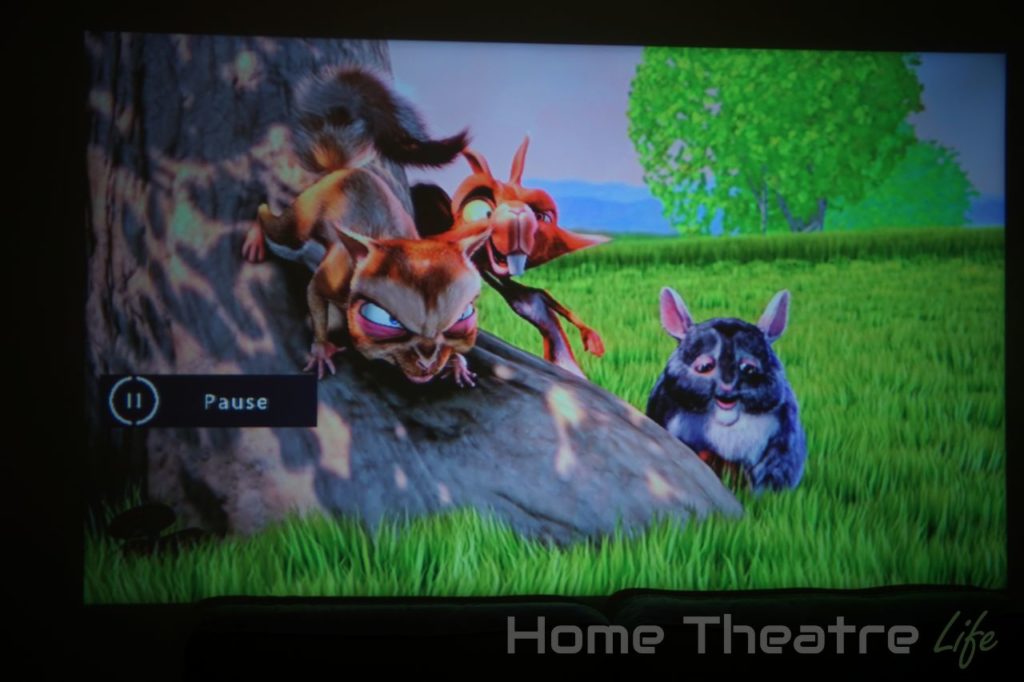 The image sharpness does soften towards the edges of the image and using keystone correction makes this worse (due to how these units do the keystone correction). The effect is particularly noticeable where fine detail is involved such as on the menu but it’s not significant enough to make it unreadable. 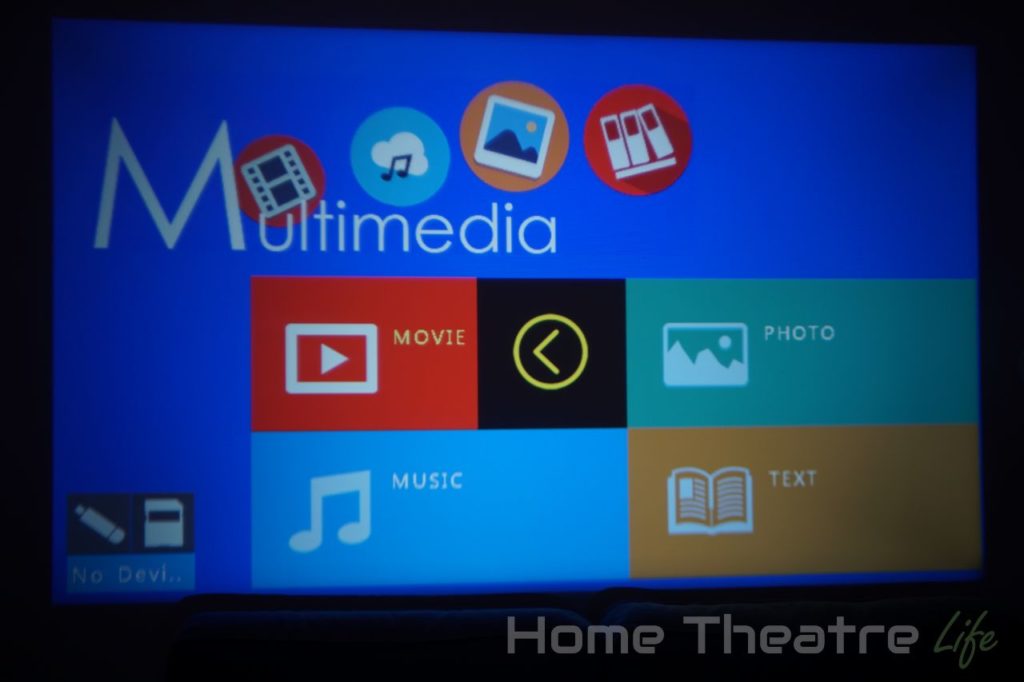 The Blitzwolf BW-MP1 features a tiny 1.5W downward firing speaker, making the unit pretty much plug and play. However, the speaker performs about as well as you’d expect, lacking bass and sounding tinny. I’d strongly recommend hooking up a good quality speaker such as the Blitzwolf F1 Bluetooth speaker via the projector’s 3.5mm audio output.

One of the biggest features of the Blitzwolf BW-MP1 is “BW-Link”. This is a wifi-based streaming solution that allows you to stream content via Miracast, DLNA and Airplay without any wires. 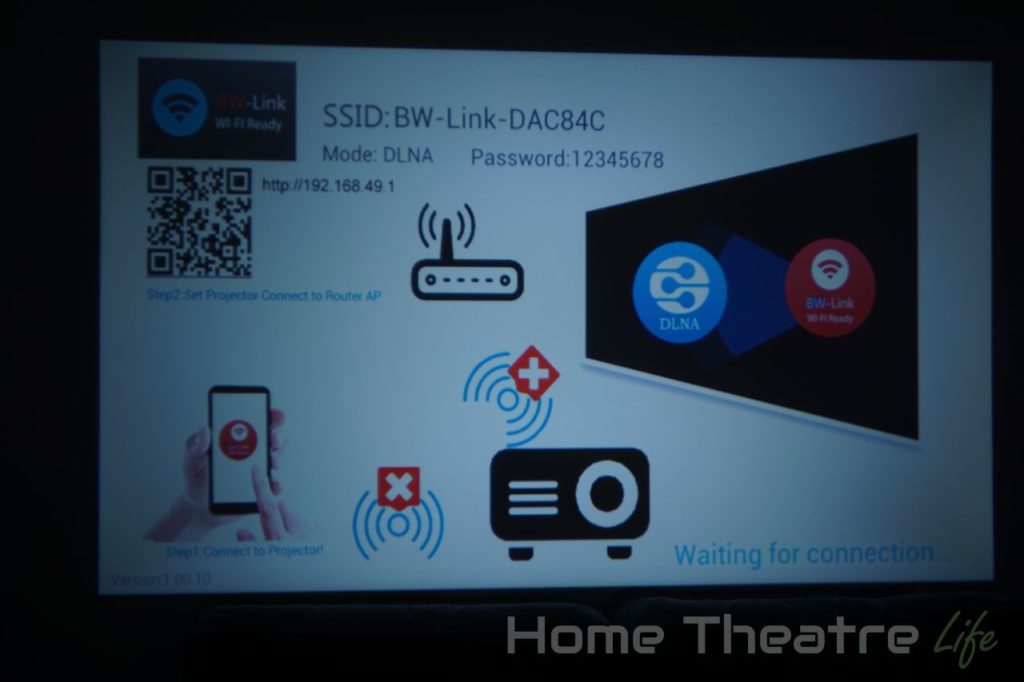 Setting it up is simple. Just connect to the SSID on the screen and then navigate to the provided IP address to get to the projector’s web interface.

The web interface itself is hideous and really hurts the device’s presentation. It looks like something you’d expect to see on Geocities, complete with terrible GIFs and a lack of design consistency. It’s the same as the one on the UNIC UC46 but I’d hoped Blitzwolf would have fixed this up. 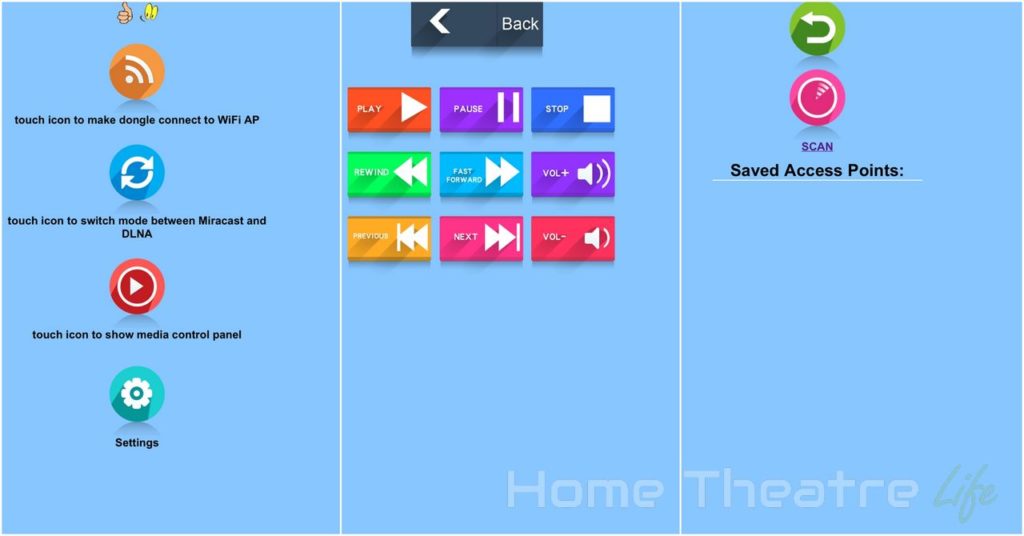 In it, you can set up wifi, switch between DLNA and Miracast streaming and use a web-based remote. That said, I couldn’t wait to never use the interface again and you really don’t need to once you’re hooked up to your wifi network thankfully.

Miracast worked fine with my Samsung Galaxy S4, allowing me to mirror my screen easily.

AirPlay and AirPlay mirroring also worked well on my iPhone 6 running iOS9. I did have the occasional issue where the next video wouldn’t play but this is sadly common with most unofficial Airplay implementations. 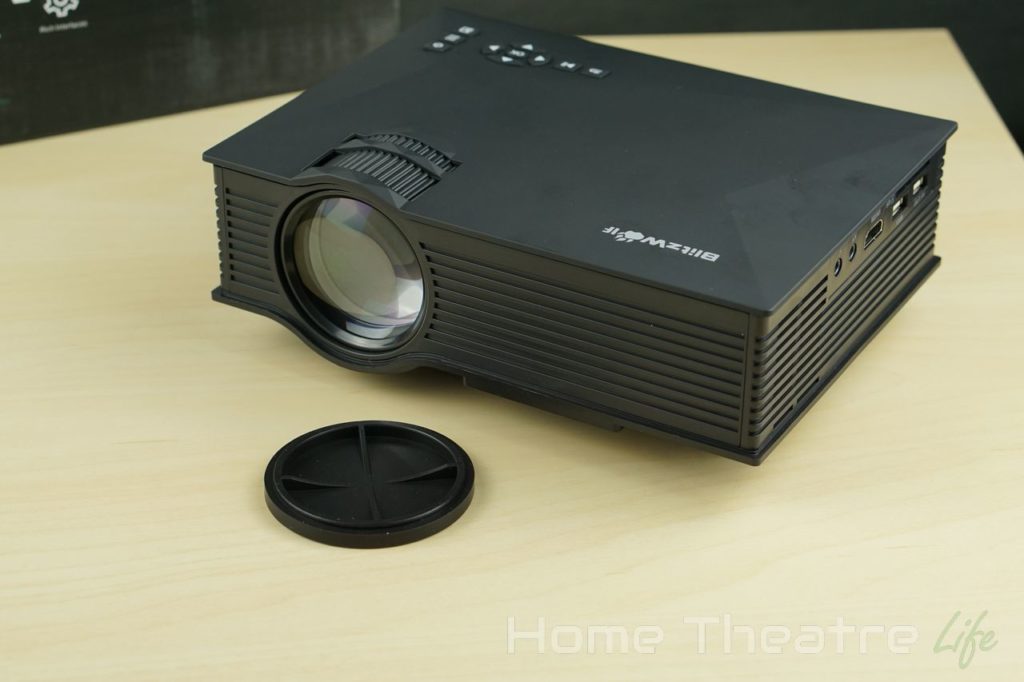 The Blitzwolf BW-MP1 is a great budget LED projector and a steal at its sub-$100 price tag. For such a low price, you’re getting a unit that’s capable of outputting a nice and large picture in addition to a variety of useful features such as the in-built media player and wireless streaming functions. Whilst an awful web UI and disappointing image presets let down the package, you’re getting a great source of entertainment for a reasonably small outlay.

You can get the Blitzwolf BW-MP1 from Banggood for around $99.

Blitzwolf BW-MP1
A fantastic little projector for under $100. Despite some minor UI issues, the respectable image quality and impressive feature set make this a worthwhile option for those looking for a big screen on a budget.
Pros
Cons
8.2