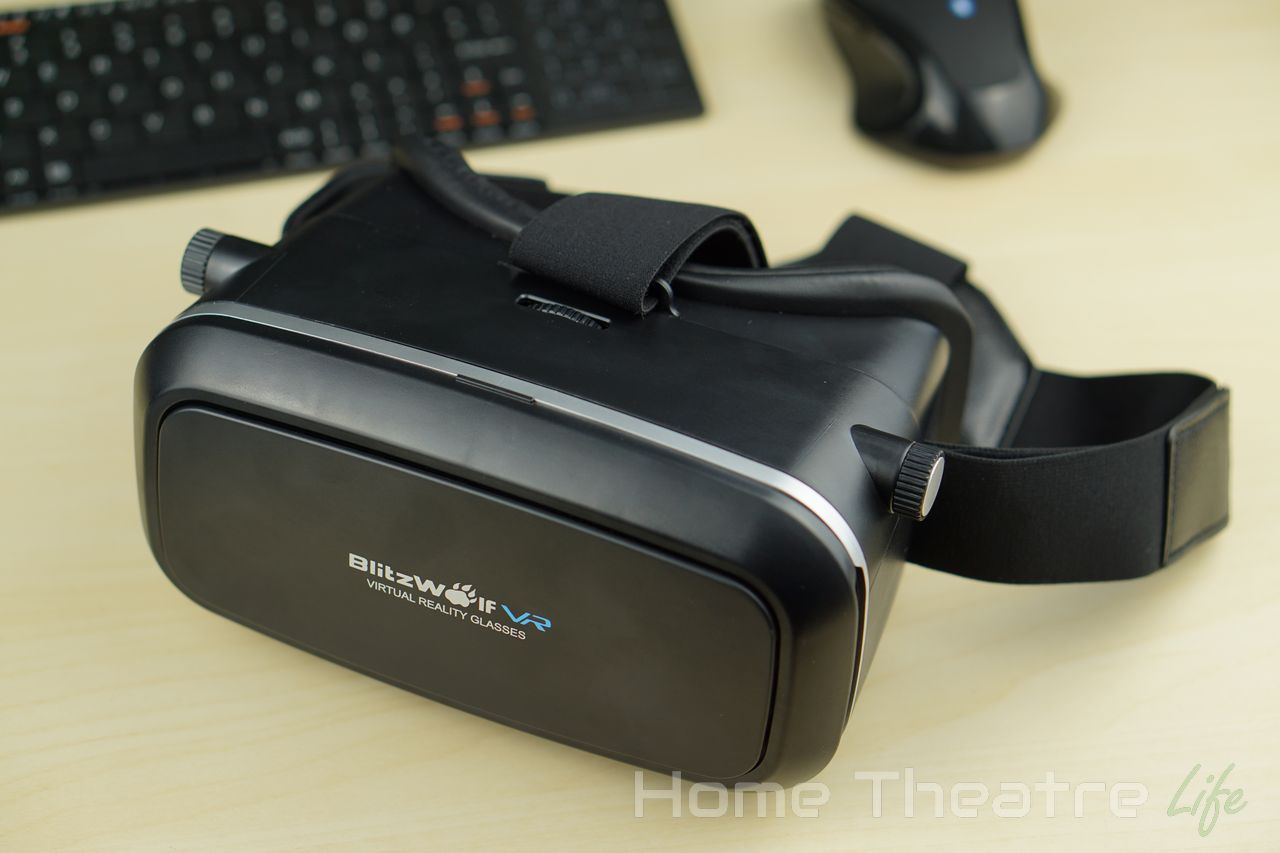 I want to say thanks to Banggood for sending a sample to review. Blitzwolf have provided a respectable set of inclusions inside the box: Taking the Blitzwolf VR headset out of the box, it’s clear that this is a fairly large headset – probably on par with other VR headsets like Samsung’s Gear VR and Oculus Rift in size.

The unit is leagues above Google Cardboard in terms of build quality (as you’d expect!). The whole unit is made of plastic, with elastic straps to hold the unit on your head and thick leather-like padding around the eyes for added comfort. The three elastic straps are fully adjustable and held in place with velcro. I’ve got a large head but didn’t have any issues adjusting them to fit.

The front of the unit shows of some Blitzwolf branding. Prying off this faceplate (it’s held in place with magnets) reveals additional ventilation for your smartphone. The entire front of the unit also opens up (again, using 3 strong magnets to hold it shut) to allow you to fit in your smartphone in the unit’s telescopic grip. Blitzwolf have stated that 4-6inch phones are supported, though you may need to remove your case to get it to fit. That said, my iPhone 6, Galaxy S4 and LeTV 1S fit in just fine.

The part of the headset that comes in contact with your phone’s screen has foam to protect it from scratches which is a nice touch. Cutouts are also available for routing cables, such as chargers and headphones if you need it. With the smartphone holder being held closed with magnets, I was worried it wouldn’t hold the phone in place when closed. Thankfully, I was wrong. Even with some more vigorous head movements, the front panel remained securely shut.

There’s a couple of dials that allow you to tweak the headset to make it more comfortable. The top dial allows you to adjust pupillary distance (aka PD – the distance between your pupils). There’s two dials on the side for myopia adjustment, bringing the image closer or further away if you’ve got issues with distance vision. There’s a little play in these dials which doesn’t affect use but does attract from the build quality somewhat. Google Cardboard comes with a magnetic switch which is used to interact with some apps but this functionality is missing on Blitzwolf’s unit. Instead, you’ll either need to open up the front panel to physically touch the screen or opt for a Bluetooth controller. However, most VR apps are designed to be controlled only with head movements or a controller so this wasn’t as much of an issue as I first thought it would be.

The unit’s build quality feels good and durable, so I’m not concerned that it’ll fall apart on me.

Using the Blitzwolf VR headset is simple. Open up the front on the unit,  slide your smartphone into the holder (making sure to keep everything centered) and fire up your favorite Google Cardboard-compatible app. Use the aforementioned dials to tweak the unit’s settings to make the image sharp and you’re ready to go.

Lens quality was fantastic and leagues better than those that came with the Google Cardboard headset. The lenses are clear without any unusual distortion, leading to nice, sharp images.

That said, image quality is also dependent on your smartphone’s resolution, as using Google Cardboard tech halves the horizontal resolution. At times, my Samsung Galaxy S4’s 1080p resolution looked a little grainy but that’s not the fault of the headset. If you’re wanting a better image, use a phone with a higher resolution (such as the Xperia Z5’s glorious 4K screen). A larger screen also leads to a more immersive experience.

I tried a heap of VR apps (check out my favorites here) and having a proper VR headset is far more immersive than Google Cardboard. Without light leaking in and no need to hold the headset in place, the experience is leagues better. The leather-like padding around the eyeframes is nice and comfortable, even after lengthy gaming sessions. However, I got a little sweaty around the eyes.

My smartphone also got a little warm too, so I’d recommend opening up the front vent if you’re planning on playing with VR for long periods of time. Do you want to flirt with VR without draining your bank account? Finding Google Cardboard isn’t durable enough for you or just sick of holding it on your face? If so, I thoroughly recommend the Blitzwolf VR headset.

It’s well made, comfortable, leagues better than Google Cardboard and an affordable upgrade to experience the wonders of virtual reality. Thoroughly recommended.

You can get the Blitzwolf VR headset from Banggood for around $26 or with a Bluetooth controller for an extra $1.

Blitzwolf's VR headset is a winner. With great materials and a comfortable build, those wanting to experience VR on a budget won't be disappointed.
Pros
Cons
7.6