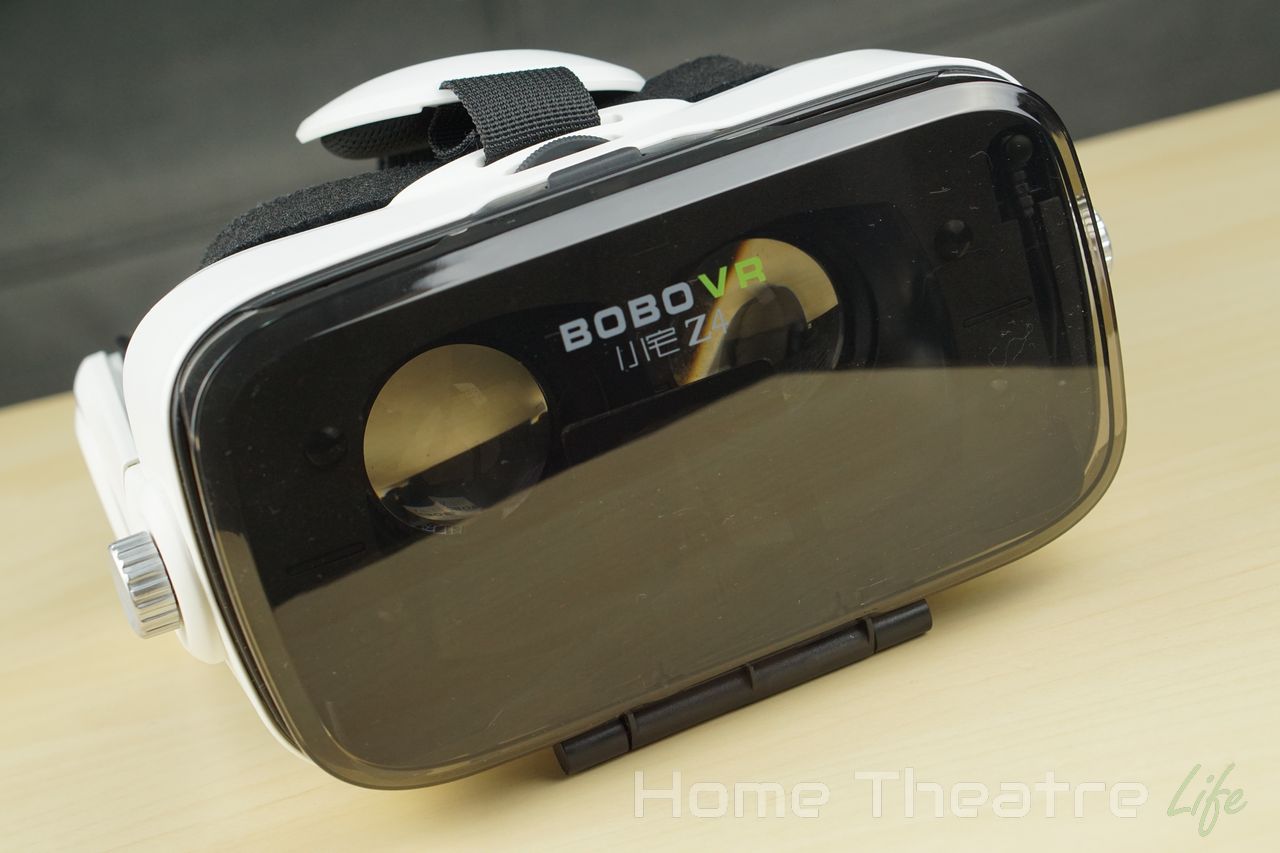 The BoboVR Z4 is the latest VR headset from the company boasting a massive 120 degree FOV and integrated headphones for a more immersive VR experience. Is it any good? Read my BoboVR Z4 review to find out! The BOBOVR Z4 follows the typical design of other VR headsets. The whole unit is quite large.

The black, white and grey color scheme looks great and definitely fits the “futuristic” image that VR headsets inspire. I also felt ridiculous wearing it but that happens regardless of which VR headset you’ve got strapped to your face. 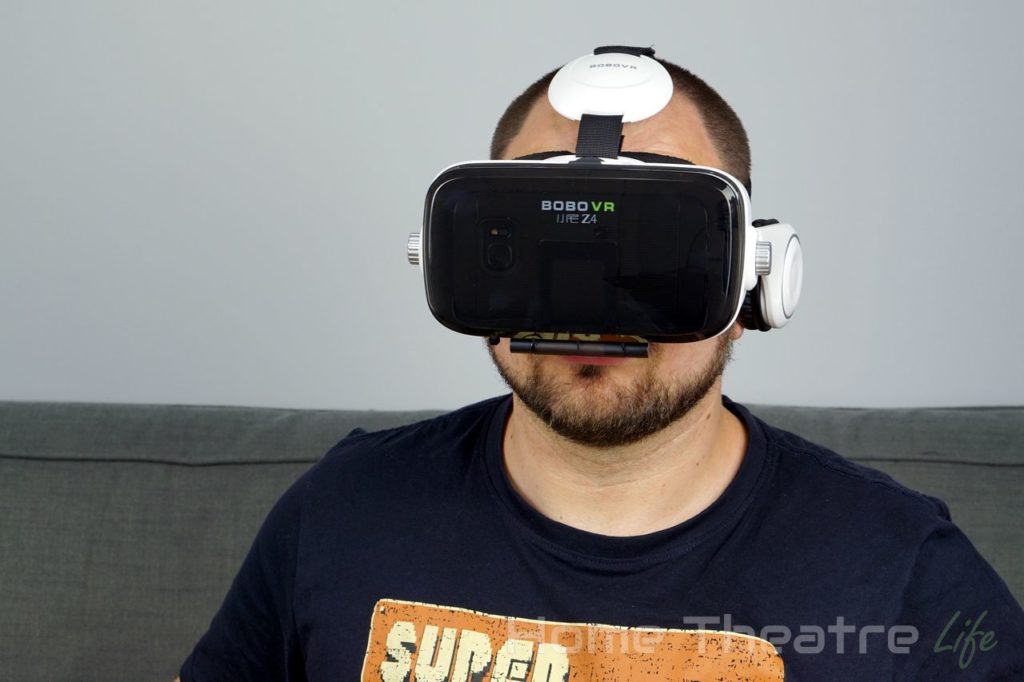 The actual smartphone holder has two adjustable guides at the bottom. BOBOVR mentions something about automatically centering your phone but I had to manually move them. The holder is quite low down so smaller smartphones do tend to sit a little low. The bigger your smartphone, the better. This section also holds the headset’s 3.5mm connector for the in-built speakers. A small rubber nub makes it easy to remove the flush-mounted connector. Unfortunately, the cable is short but will reach the headphone port on most phones. Unfortunately, BOBOVR didn’t factor in phone’s with bottom-mounted headphone sockets. Some Google Cardboard apps won’t adjust to your device’s orientation so you’ll need to pick up an extension cable to use the in-built headphones with devices like the iPhone 6 or Galaxy S7.

The lens section features a soft foam that is comfortable to wear. However, the lack of any sort of covering like the leather-like one seen on the Blitzwolf VR headset cheapens the feel of the headset. 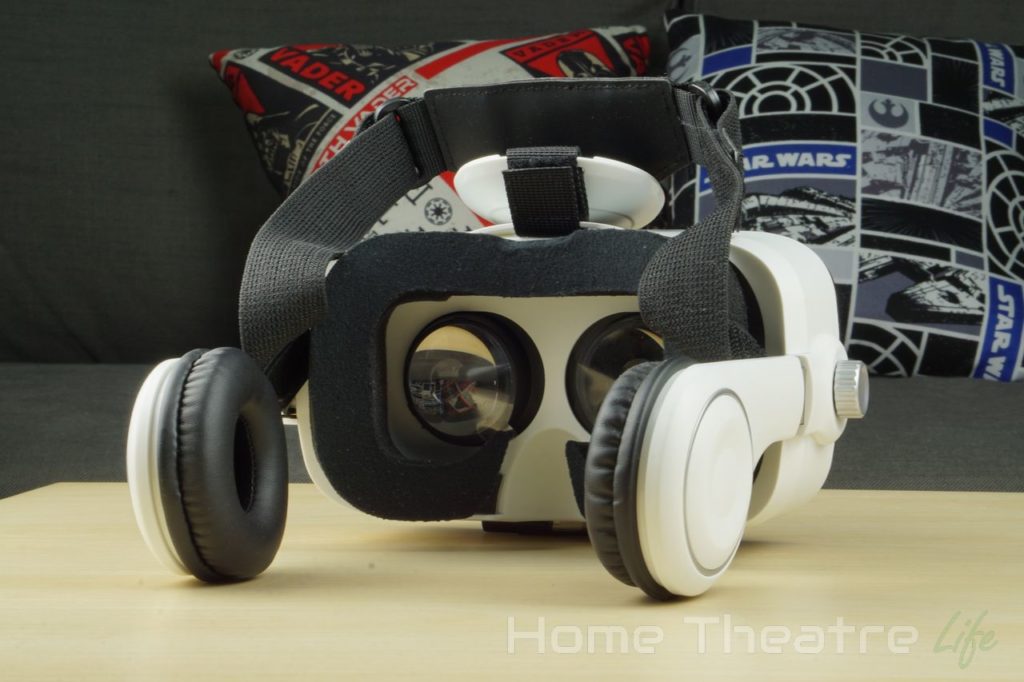 Underneath, there’s a volume slider that allows you to change your smartphone’s volume and a button for activating the pressing the touchscreen. BOBOVR have really done an excellent job making things as convenient as possible. 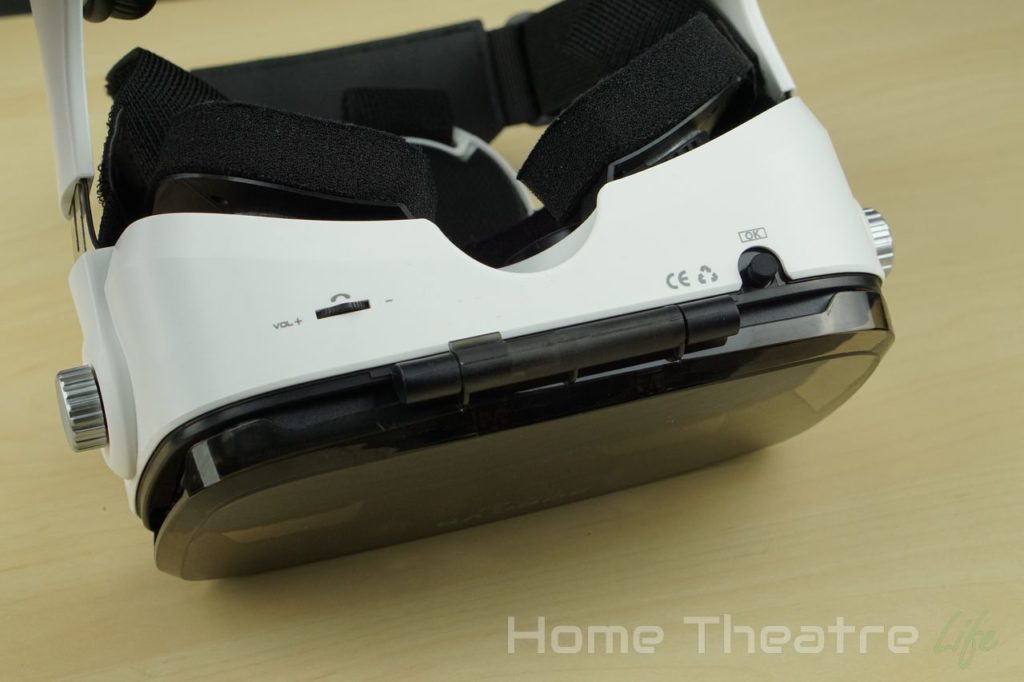 The headphones are built into the unit which is both a pro and a con. It’s great that you’ve got an all-in-one VR headset but it makes using your own headphones far harder (or impossible if you’ve got bigger headphones).

The smartphone holder does a great job of keeping everything in place but there’s not a huge amount of clearance. I was able to fit in my Samsung Galaxy S7 in a case fine but my iPhone’s bulkier case meant I needed to strip it down to be able to use it. 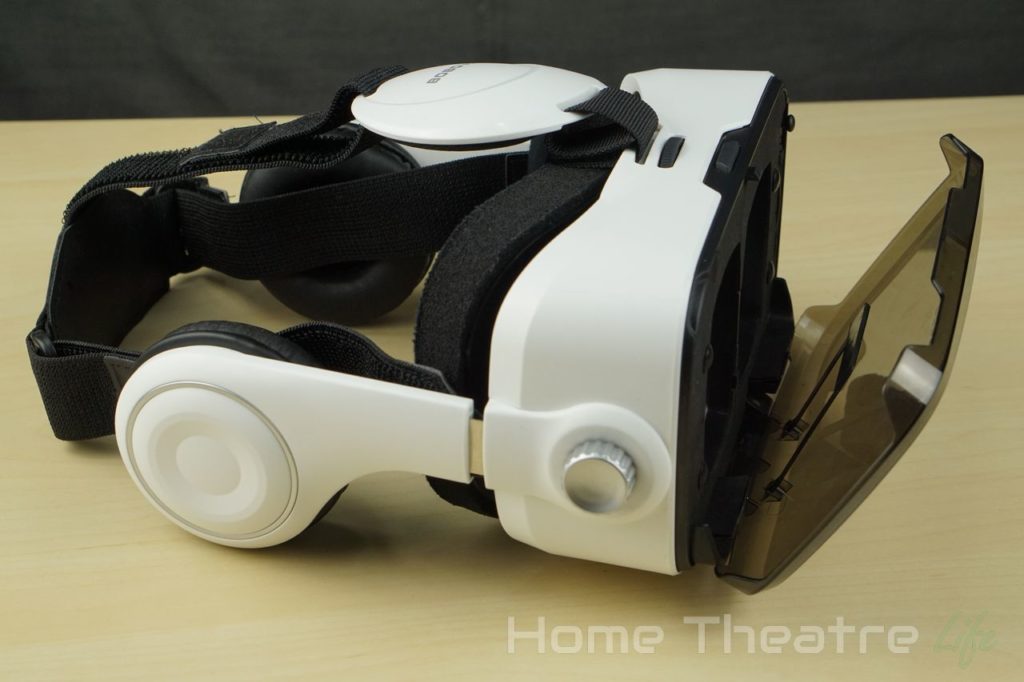 You can hook up the included headphones using the 3.5mm connector hidden in the faceplate. However, the socket’s cable is quite short and, with a number of smartphones now moving the headphone socket to the bottom whilst Google Cardboard fixes rotation, you couldn’t actually use the headset without a headphone extension cable. The touch button is a great inclusion that’s often missing in other VR headsets. Being able to interact with the screen (i.e. when an app uses Google Cardboard’s magnetic switch) is great.

I also loved that the company included volume and call controls in the headset, allowing you to remain in VR even when the real world is calling.

The massive 120 degree field-of-view (FOV) of the BOBOVR Z4 is incredible. Whilst headsets such as the Blitzwolf VR Headset present an image that looks like a box in front of you, the BOBOVR’s image completely wraps around you. The quality of the lenses are great and seem to offer a consistently sharp image. It’s fantastic. 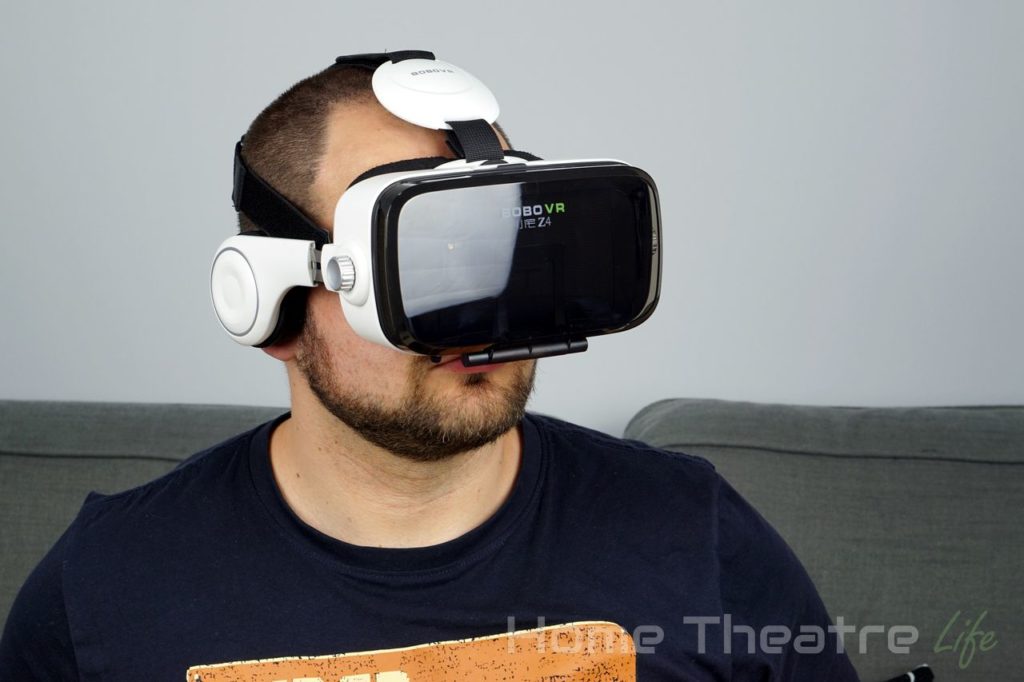 The built-in headphones are comfortable and their sound quality is also pretty solid, with plenty of bass and enough detail for an immersive experience. They’re not audiophile quality but are suitable for VR games and movies. Sound isolation is decent, but you’ll still hear some background noise.

In terms of comfort, the BOBOVR Z4 is quite comfortable. I didn’t get hot and never felt like the headset was too heavy, even after lengthy sessions. 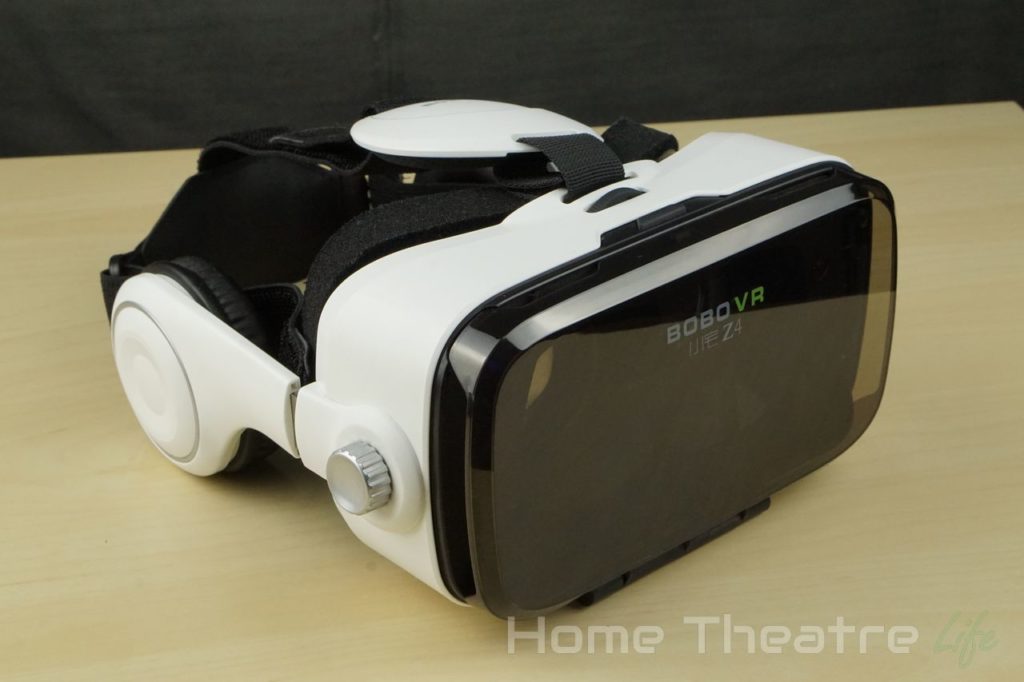 I really enjoyed my time with the BOBOVR Z4. The headset is well made and has the best field of view that I’ve seen so far. It’s far more immersive than other VR headsets I’ve used.

That said, the 3.5mm connector is oddly short and having built-in headphones make it nearly impossible to switch out the headphones for your own.

If you’re wanting an all-in-one headset with unparalleled immersion (at least compared to other Google Cardboard headsets), the BOBOVR Z4 is excellent – as long as you’re ok with the premium pricetag and non-removable headphones.

The BOBOVR Z4 is available from GearBest for around $45.

BoboVR Z4
A fantastic VR headset, though the integrated headphones do limit its flexibility.
Pros
Cons
7.4