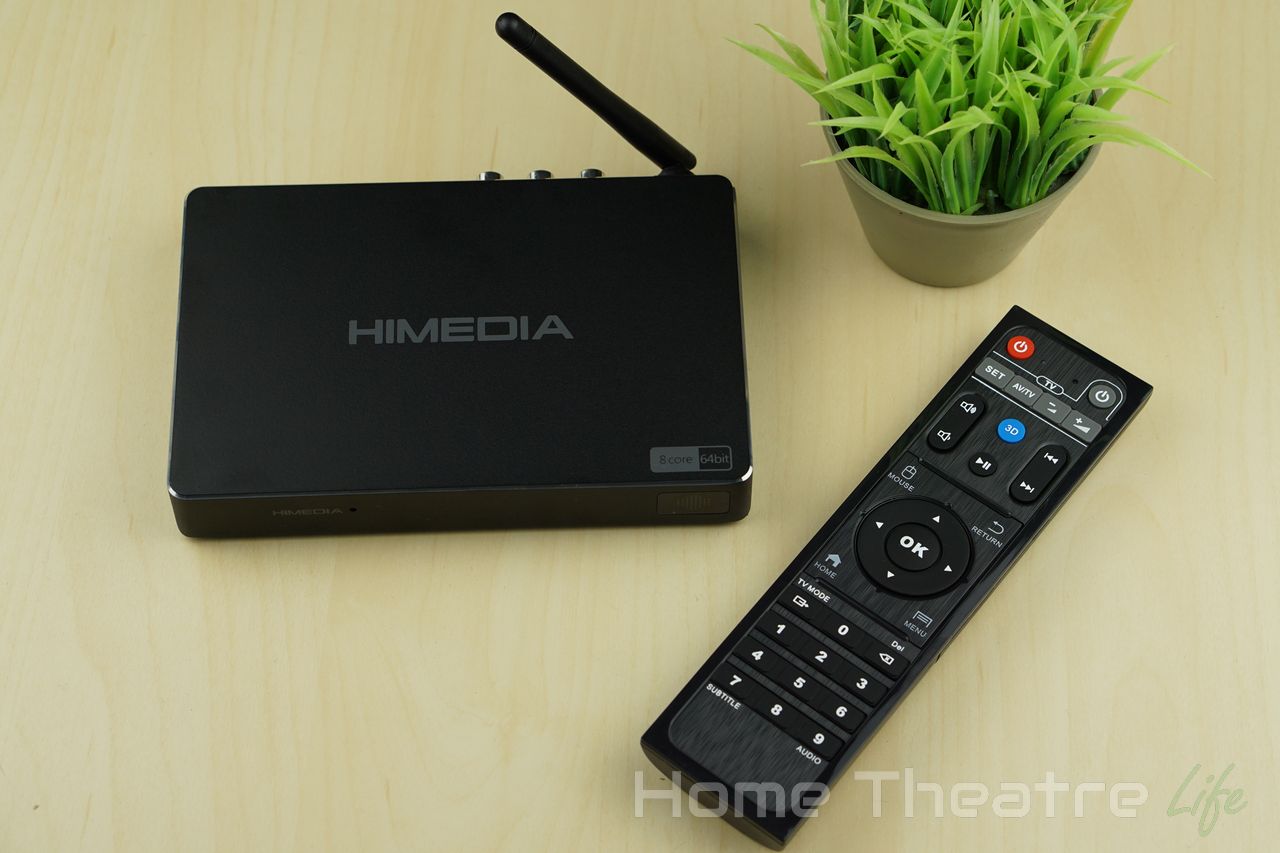 The HiMedia H8 is an Android 5.1 TV box powered by the octacore Rockchip RK3368 processor. With a stylish design, 2GB of RAM and 16GB of onboard storage, how does it perform? Read our Himedia H8 review to find out! 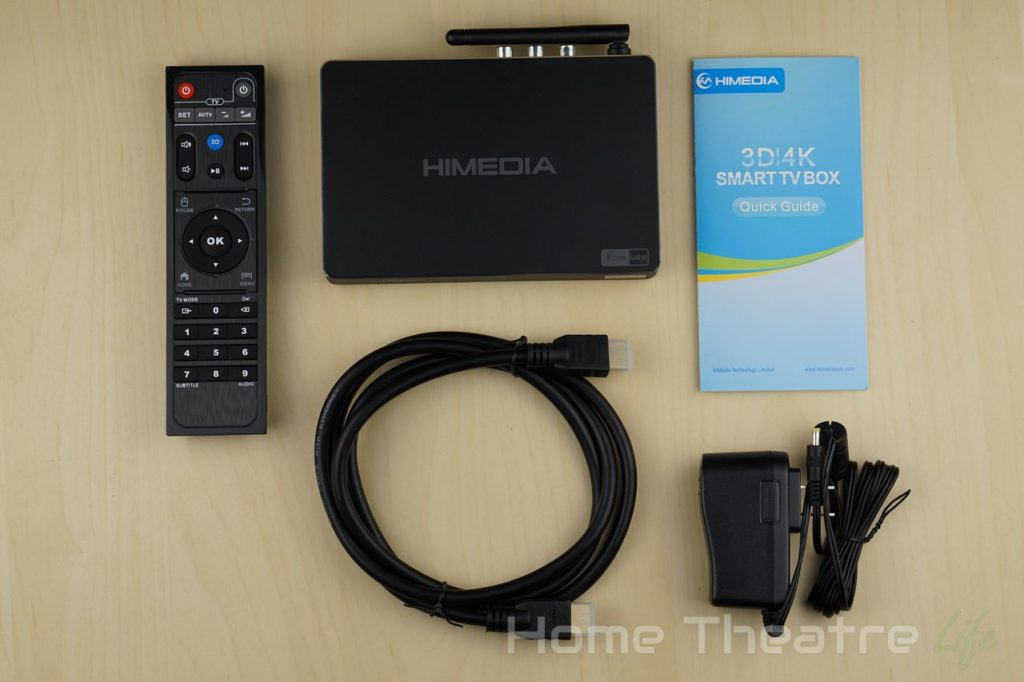 Himedia have given you everything you’ll need to get connected inside the box:

The Himedia H8’s rectangular design is simple yet elegant. Despite looking similar to other Android tv boxes, a silver chamfered edge helps it look unique yet still blend in with your other AV equipment. The unit’s black matte finish looks nice and keeps fingerprints to a minimum. 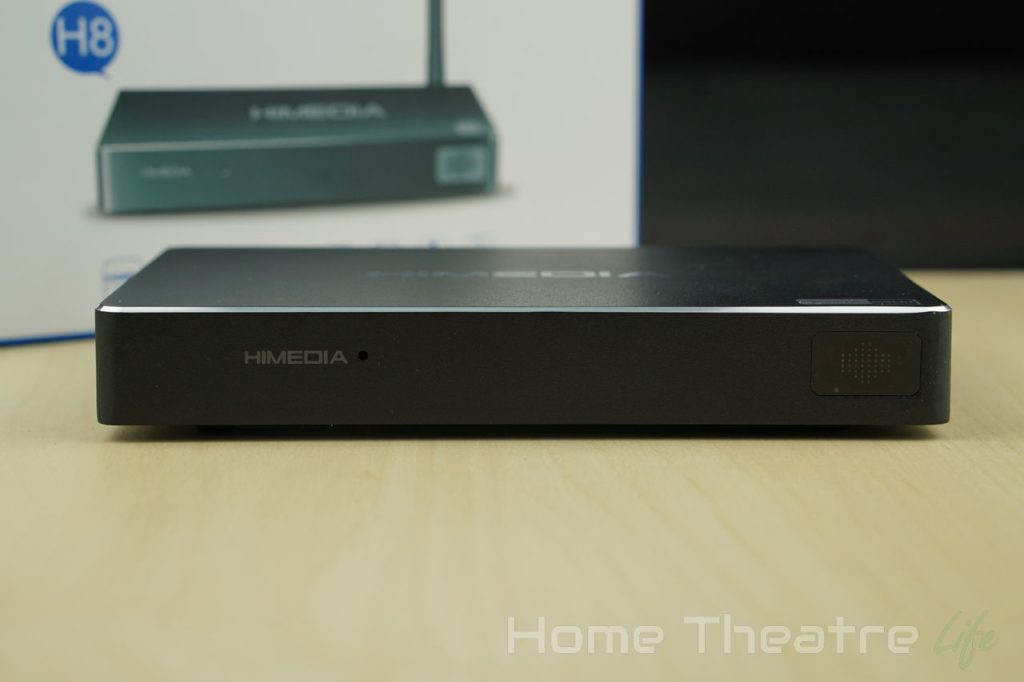 Himedia have opted for an all-metal case and it really pays off. The case adds weight to the unit which makes it feel well-made, rather than a cheap Android box.

In terms of ports, they’re located on the side and rear of the unit. On the right side, there’s two fullsize USB 2.0 ports. 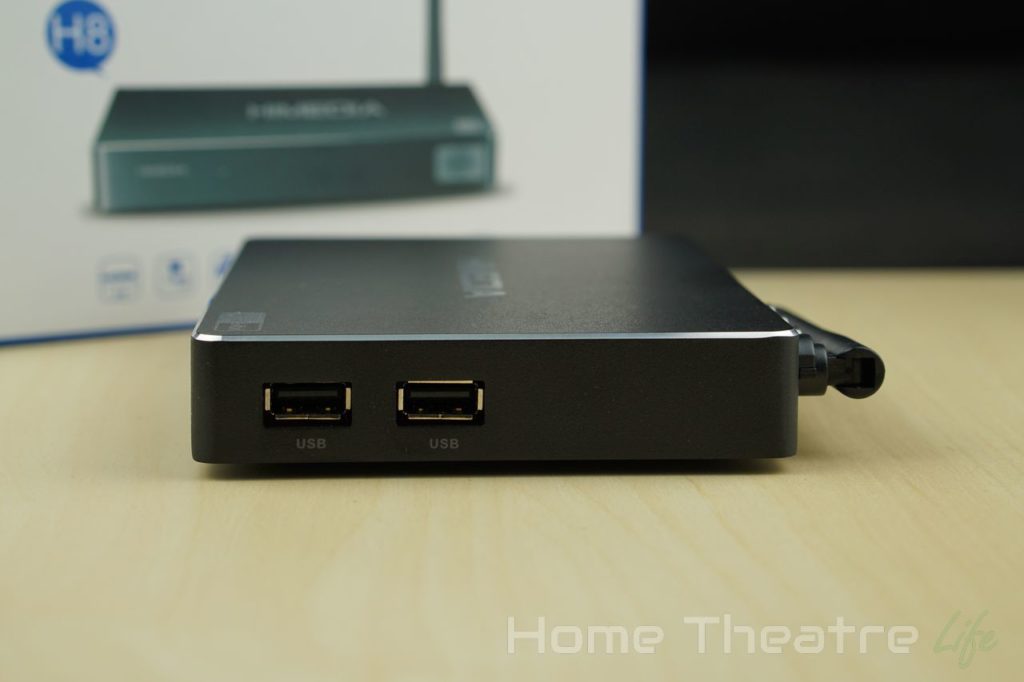 The left side houses a full-size SD card slot. 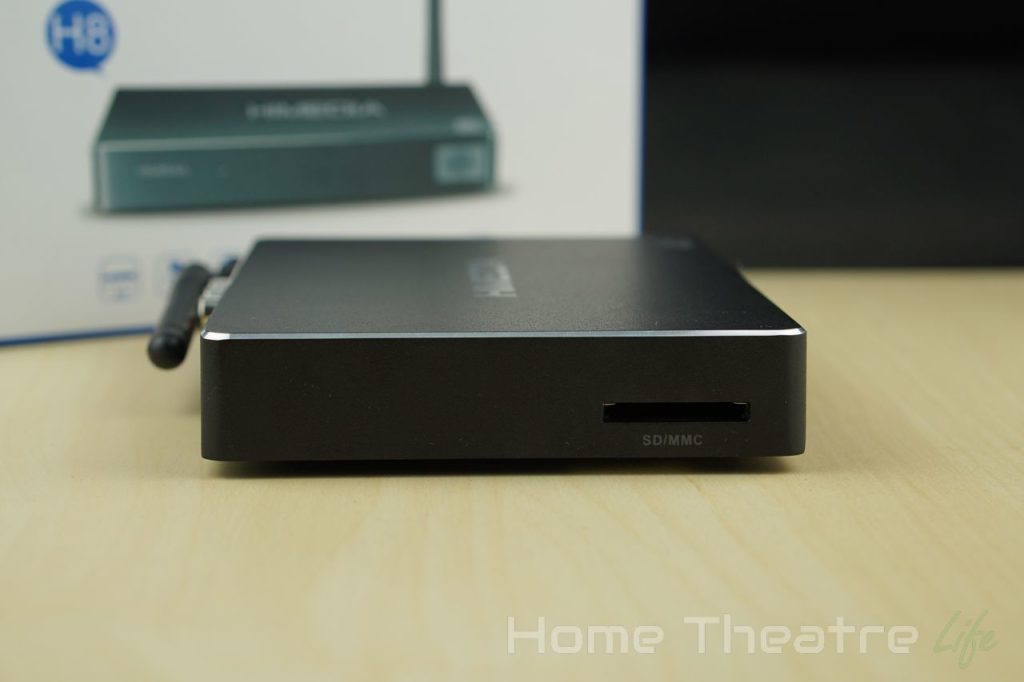 Most of the ports are located on the rear of the unit. From left to right, we’ve got the external WiFi antenna, optical audio, composite video output, HDMI output, Ethernet and DC In.

It’s interesting to see that Himedia have opted to include the three composite video outputs rather than the single port that requires an adapter. It’s not something that’s often seen any more but I’m sure a few users will appreciate it. 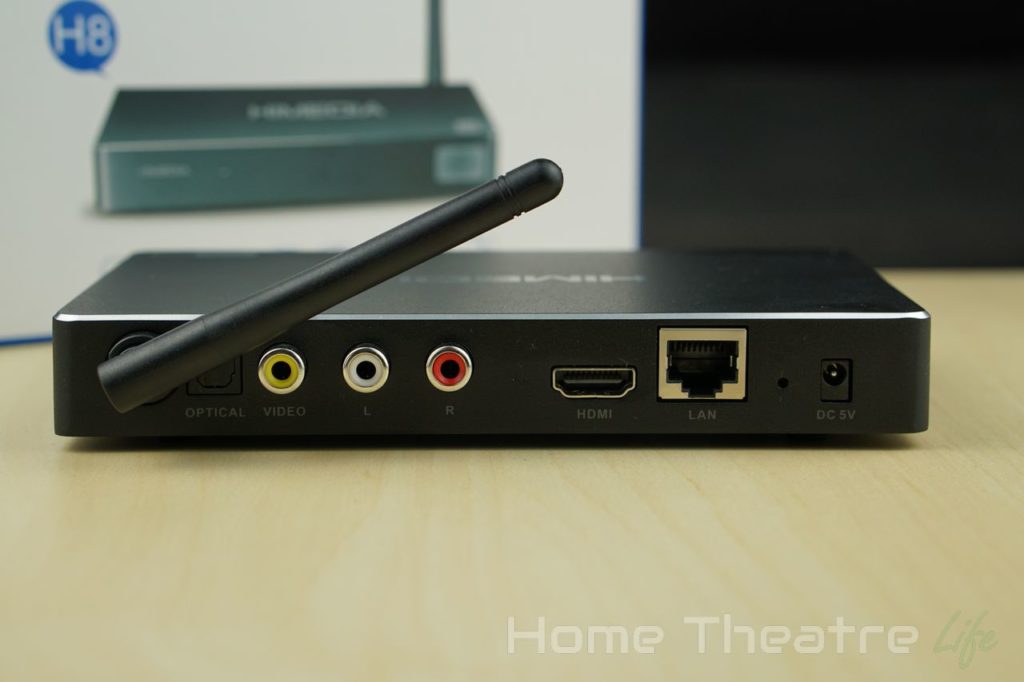 The included IR remote is pretty comprehensive and feels great. Aside from the typical Android buttons (namely Home, Menu, and Back), there’s also a full set of multimedia controls, a 3D button and even a TV buttons which can be learned from your TV’s IR remote.

For those that need it, there’s also a mouse mode, though I’d recommend that you fork out for an air mouse for a far better user experience.

I also think it’s important to call out that the remote isn’t clicky like those included with most Android boxes. That means that button presses are nice and silent, making the controller feel well made rather than cheap and nasty like others on the market. 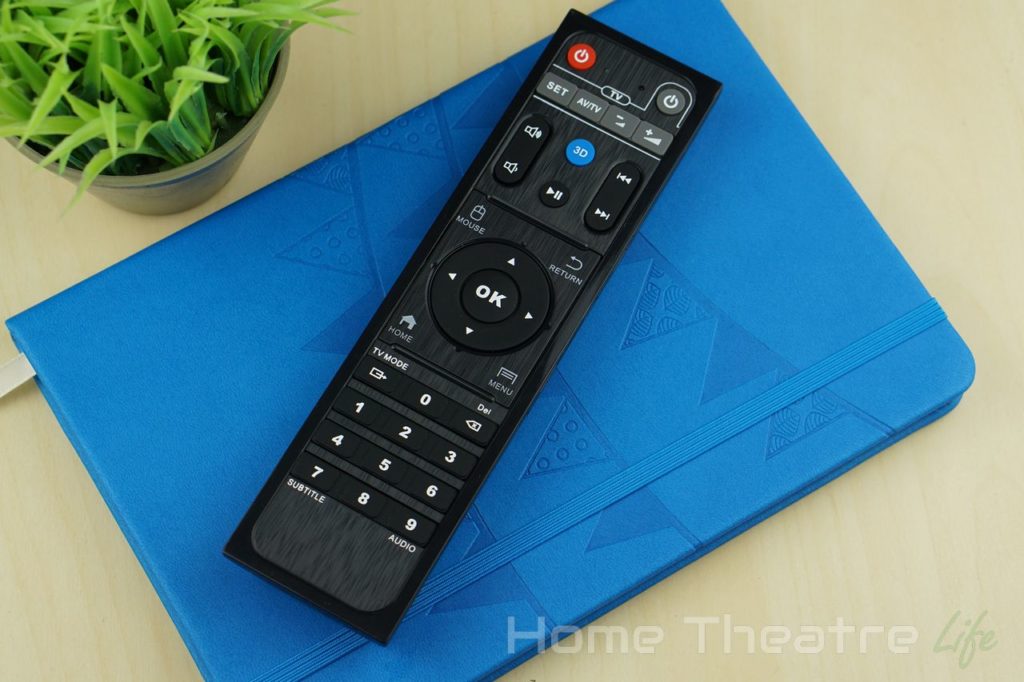 The HiMedia H8 automatically boots when plugged in to power. With a USB keyboard and mouse connected, a cold boot takes around 30 seconds. There’s no standby mode unfortunately but the unit can be powered on and off via the remote.

HiMedia have shipped the H8 with a unique TV-friendly launcher that looks like a more refined version of the MediaBox launcher we’ve seen before, with nice animations and a consistent design throughout. 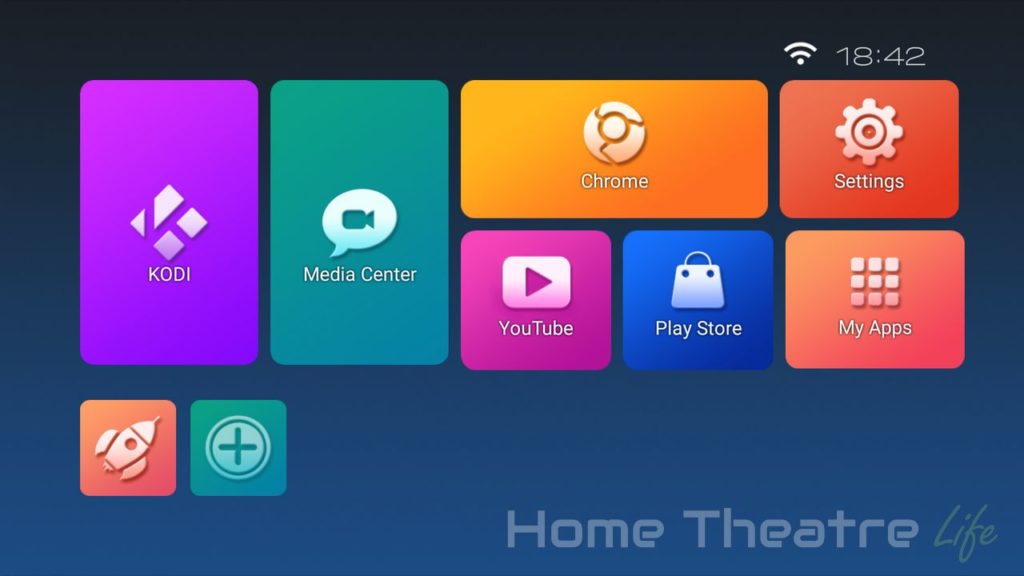 Everything animates smoothly, such as the transitions between pages to the menu selector, making the interface feel very polished.

There’s large shortcuts for key apps such as Kodi and YouTube whilst folders allow you to organise your apps so they’re readily at your fingertips. 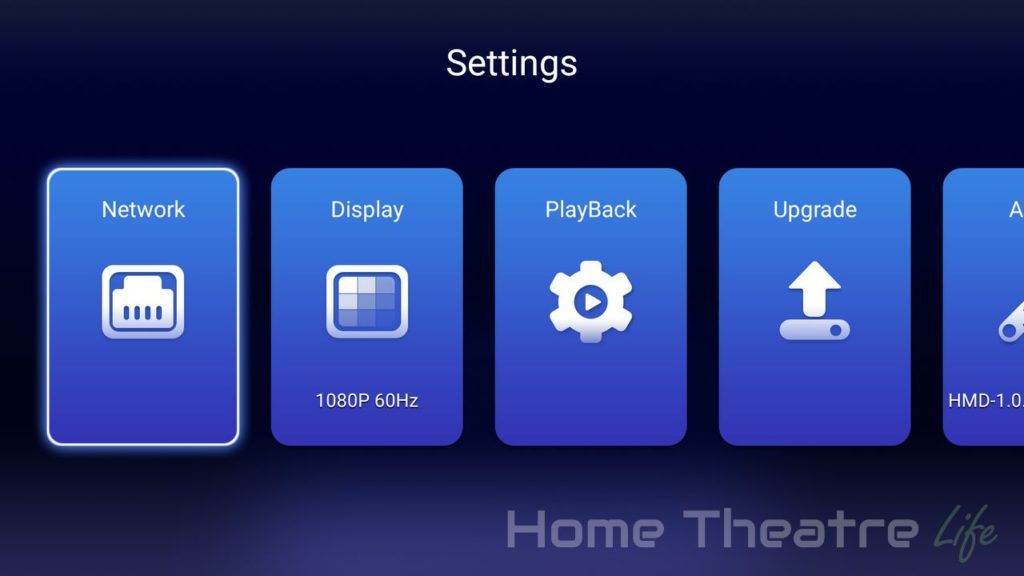 There’s a couple of pre-loaded apps such as Netflix, Facebook and Kodi to name a few. The Google Play store is installed and I was able to install various apps from there without issue. The box isn’t rooted from the factory but there’s methods available.

OTA updates are also available via Settings menu, making it easy to update to the latest firmware from HiMedia’s servers or local media. 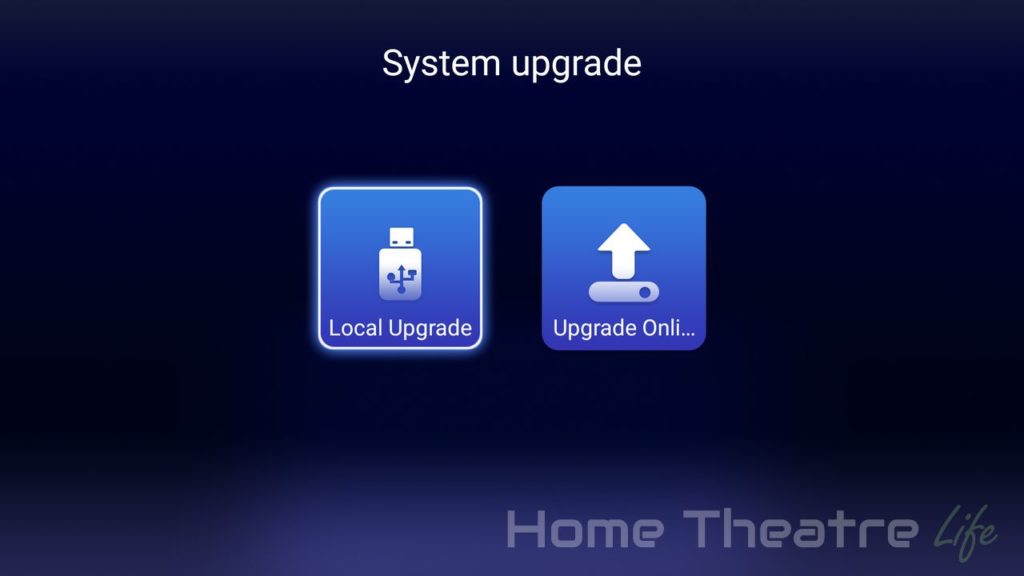 As expected from the Rockchip RK3368, the processor handles Android 5.1 well.

Firmware seemed to be stable, as I didn’t have any crashes during testing. 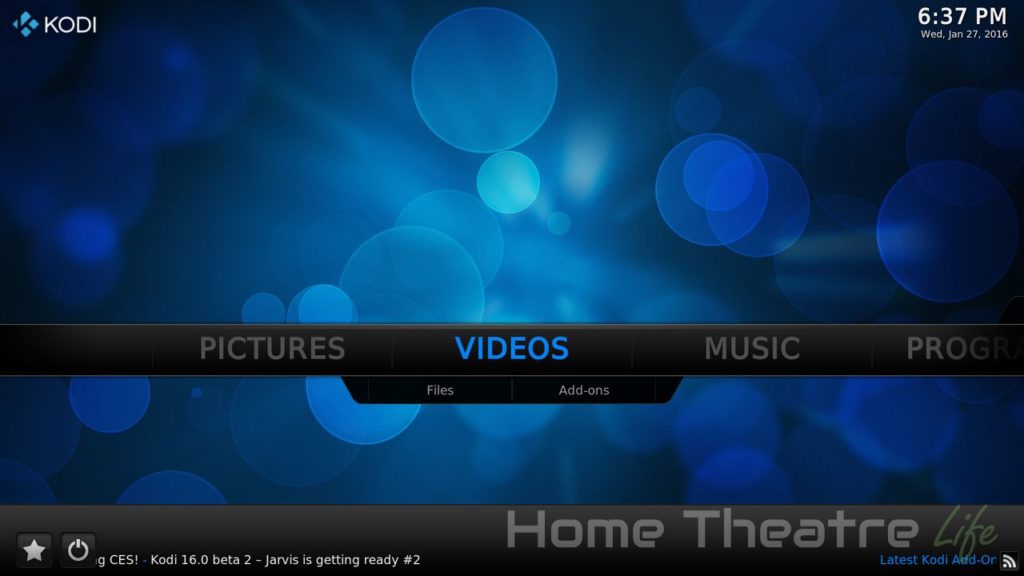 Media Playback was tested using the pre-installed version of Kodi 15.2

The HiMedia H8 did a solid job playing back media, handling almost every file I threw at it. The usual culprits tripped the box up, with 4K 60Hz H.264 and 1080p Hi10p video samples struggling to play back like nearly every box I’ve tested. 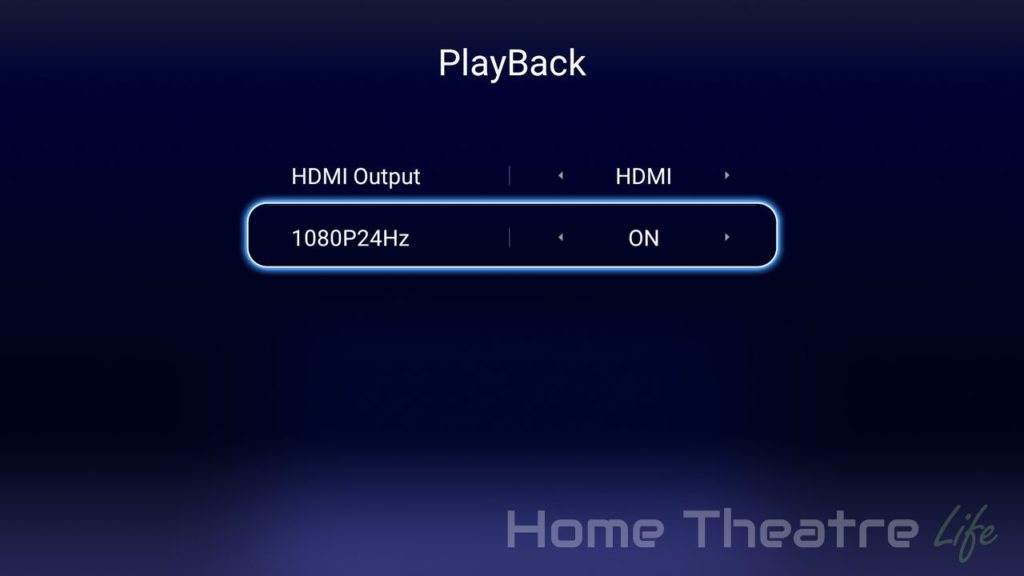 I was impressed to see that automatic framerate switching actually works! This is something few Android boxes actually have functioning and is a massive plus for media fans. Whether I was playing 24Hz or 50Hz content, the Himedia H8 automatically changed my display’s refresh rate to match.

23.976FPS videos seemed to play without any visual artifacts. However, I couldn’t verify if the box was rendering the video at 23.976Hz or 24Hz.

Deinterlacing performance seemed good, without any major artifacts during playback.

Netflix worked fine on the HiMedia H8. However, video resolution was limited to 480p like most other Android boxes. 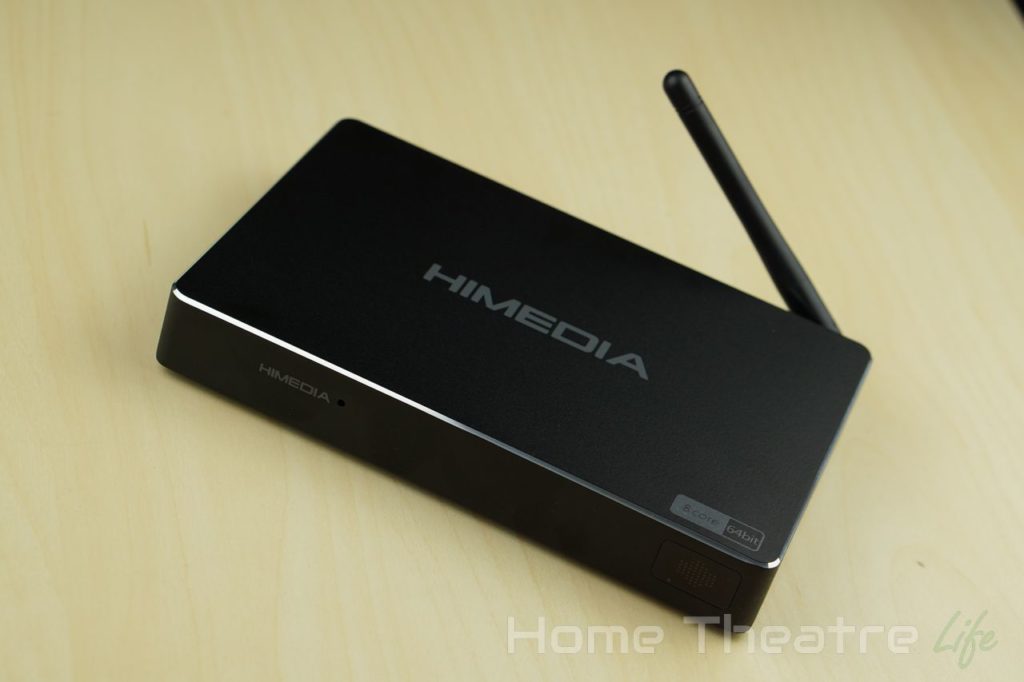 I didn’t have any issues playing back videos from my USB-powered 2.5″ HDD or USB flashdrive. 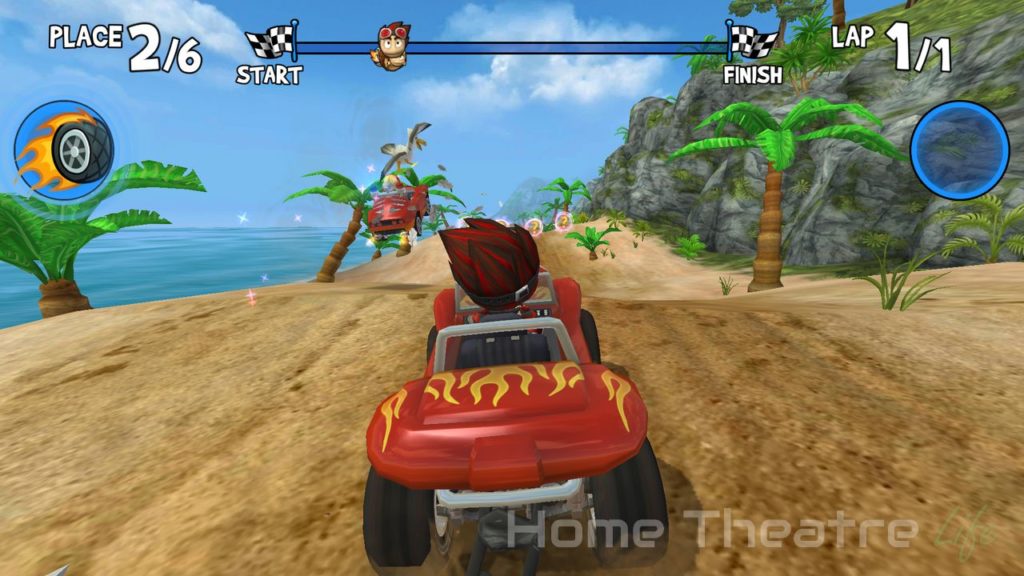 Gaming performance was good as expected, with both Jetpack Joyride and Beach Buggy Racing playing well at 1080p on maximum settings.

Unfortunately, the Himedia H8 doesn’t have Bluetooth so Bluetooth devices aren’t compatible. That means a 2.4GHz controller such as the Tronsmart Mars G01 is a must.

Gaming using my Tronsmart Mars G01 was perfect, with the pad automatically detected as an Xbox 360 controller when plugged in and working with Beach Buggy Racing. 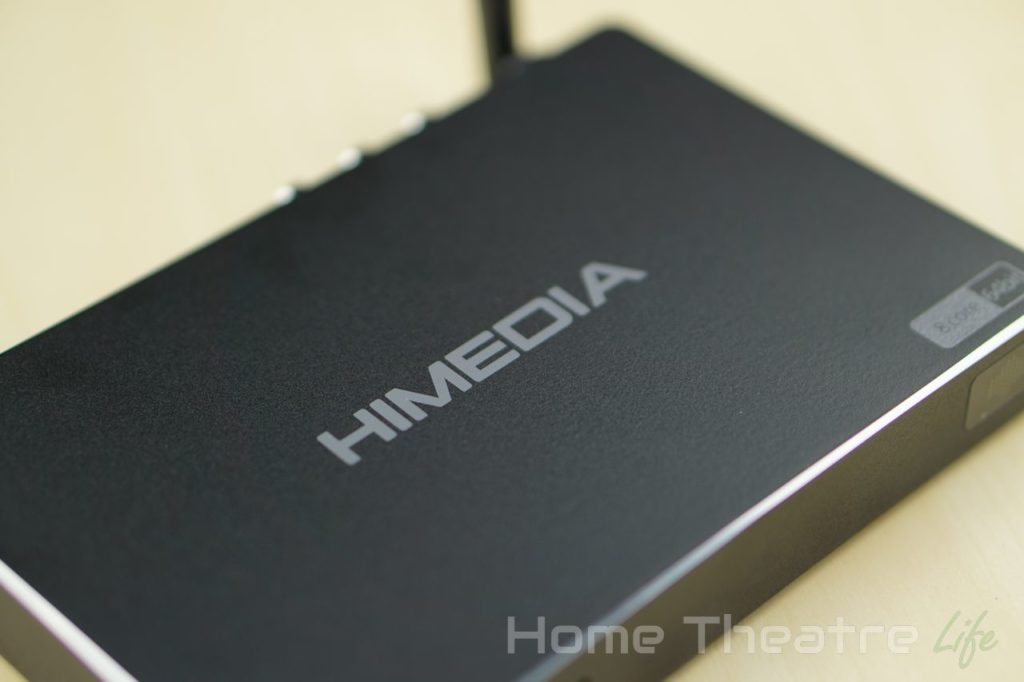 Wireless performance was reasonable, achieving 48.7Mb/s upload and 42.8Mb/s download when connected to the 2.4GHz band.

In terms of real-world performance, I didn’t have any issues playing back my 1080p and 4K H.264 samples from my NFS share. 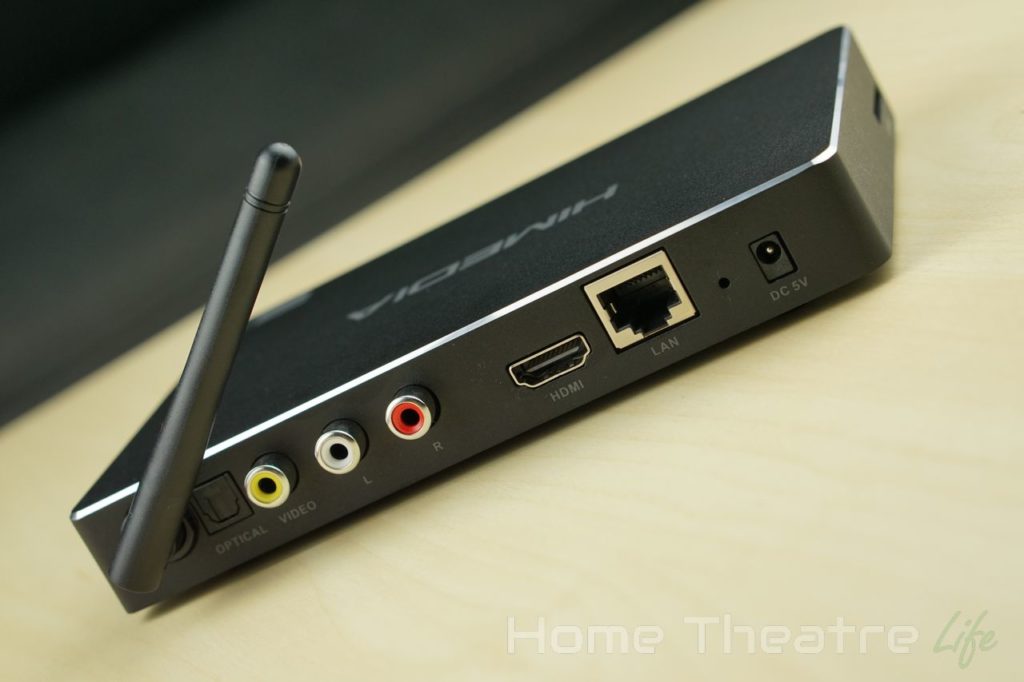 Unfortunately, as standby isn’t supported on the HiMedia H8, no power consumption values can be reported for this mode. 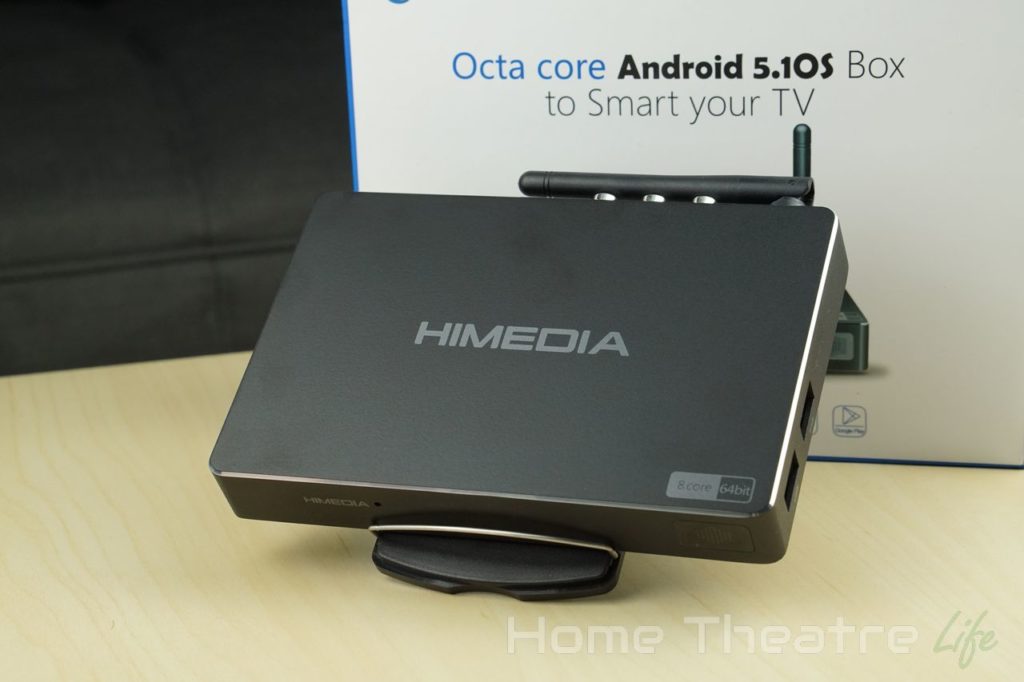 The HiMedia H8 is an solid Android TV box. It’s well-built, performed well during gaming and media playback and even supports Automatic Framerate Switching in Kodi – a massive plus for movie lovers. However, the lack of Bluetooth may be an issue for some, particularly if you’re a gamer.

Overall, the HiMedia H8 is worth a look if you’re wanting a capable media player that can handle some gaming too – as long as you’ve got a USB-based controller.

The HiMedia H8 is available for around $100 from GeekBuying, AliExpress and [amazon text=Amazon&asin=B014VUFH8E].

HiMedia H8
The HiMedia H8 is a solid media player and gaming unit, as long as you can live with the lack of Bluetooth.
Pros
Cons
7.8