Thanks to Pandawill for providing me a sample to review. Click here to view the latest price.

What is the iPazzPort Mini Bluetooth Keyboard?

The iPazzPort Mini Bluetooth Keyboard is a tiny, portable Bluetooth keyboard with a built-in touchpad for mouse input. It is compatible with iOS, Android and Windows. There’s really not much to see here. The box contains the keyboard itself and the instruction manual. It’s disappointing not to see some AAA batteries included in the pack, but its not a major issue. 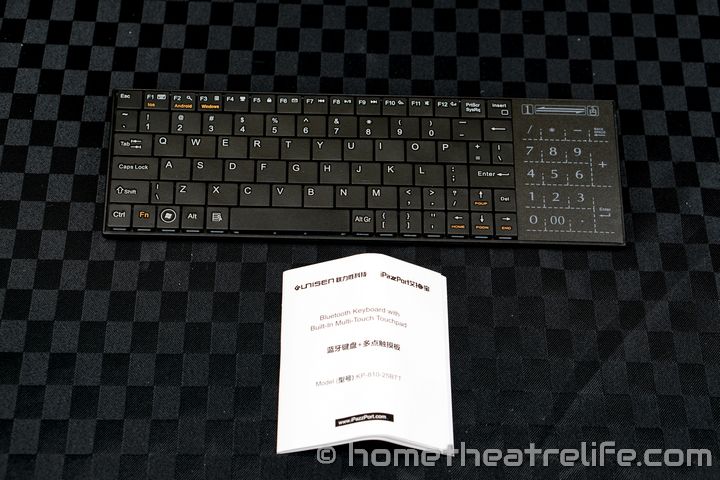 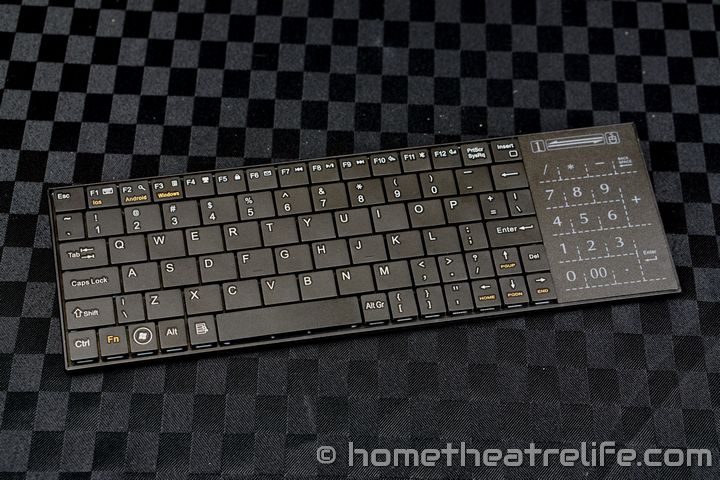 The iPazzPort Bluetooth Keyboard looks like someone’s taken a keyboard and hit it with a shrink ray. Featuring 80 keys, it packs a lot of functionality into its tiny frame. However, it’s clear some concessions were made to get it so small.

In addition to a standard QWERTY layout, a Windows key and multimedia controls make an appearance. Additional features such as PGUP/PGDN and the OS-specific keymappings are handled via the orange Function key.

Noticeably absent is the presence of a right shift and control keys. I understand the trade-off but it does feel strange to miss a key that I use regularly during typing. 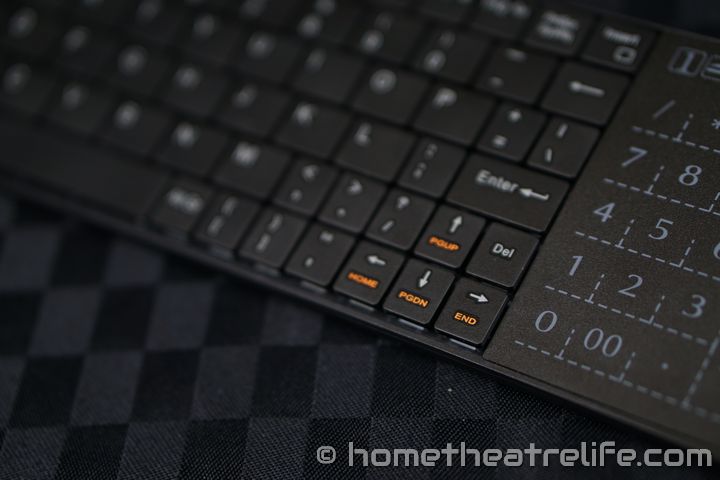 Additionally, some of the keys have shifted around to fit the device’s frame, such as the “Delete” key being located next to the directional keys. These take some time to get use to but it becomes more natural with repeated use.

The touchpad is located on the device’s right side and doubles as a touch-sensitive numpad. A swipable switch is located at the top to toggle between the mouse and numpad modes. 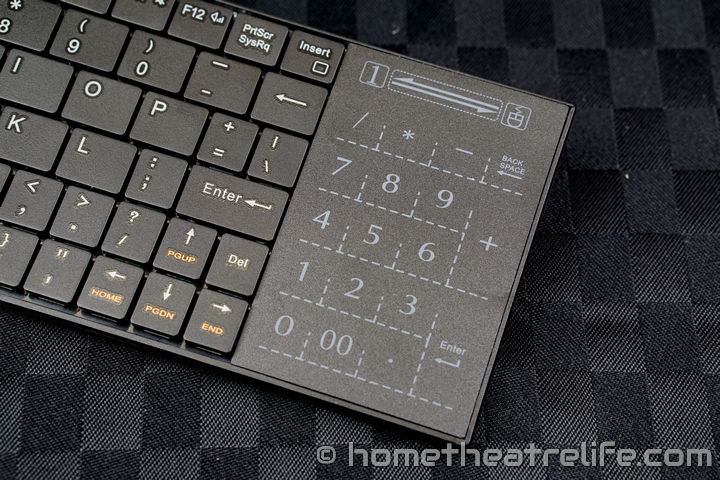 Underneath the device is the battery compartment and rubber feet to prevent slippage. The battery compartment doubles as a stand, giving a comfortable typing angle. Unfortunately, plastic, rather than rubber, offsets were used here, resulting in the keyboard sliding a little bit when using it on a smooth surface.

Build quality does feel a little flimsy due to the thinner plastic used in the device. Whilst the device is fine during use, it does flex under pressure so I’m not sure how it would hold up being thrown into a backpack unprotected.

A power indicator is noticeably missing. Thus, there is no way to tell whether the keyboard is powered on or how much battery power is remaining.

Using the iPazzPort Bluetooth Keyboard is a piece of cake. After putting in two AAA batteries, simply switch the power switch to the “on” position to turn on the keyboard. Holding down Esc-K puts the keyboard into pairing mode.

You’ll need to make sure that your device has built-in Bluetooth or  invest in a Bluetooth dongle on hand such as this one to connect the keyboard to your device. 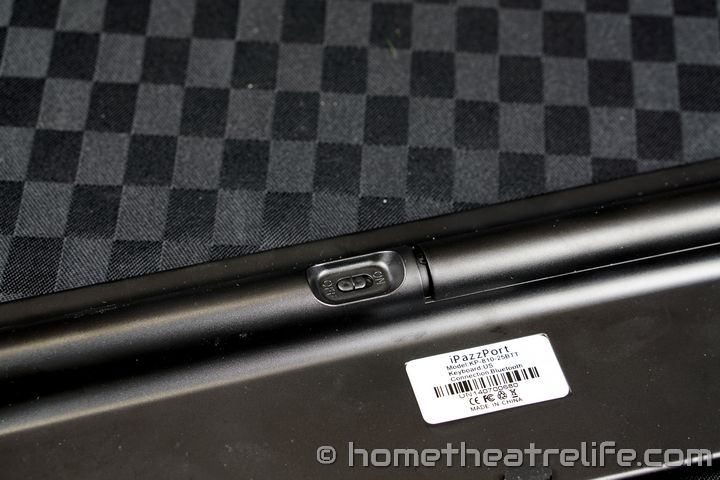 On your device’s Bluetooth pairing menu, select the “Bluetooth keyboard” and type the code to pair the device. I didn’t experience any issues pairing the device to various iOS, Android and Windows devices including an iPhone 6, Teclast X80HD and Galaxy S4.

The iPazzPort Mini Bluetooth Keyboard can only pair with one device at a time so multi-device users should be aware of this limitation and be prepared to work around it or look at something like the [amazon text=Logitech K480&asin=B00MUTWLW4]. The keys offer a satisfying travel and click when pressed. However, they’ve have had to shrink to fit the keyboard’s diminutive size. As such, typing lengthy articles on the device can feel a little cramped and lead to some typos. After practicing for a while, I did get used to the smaller keys. However, I wouldn’t plan on writing the next War and Peace on it.

The iPazzPort Mini Bluetooth Keyboard features compatibility with iOS, Android and Windows and, impressively, allows you to switch to OS-specific key mappings depending on the OS you’re using. Thus, users on Windows can use the Windows key, whilst the iOS mapping offers keys for Search or the Home button. This was incredibly handy, as a single keyboard is effective for such a wide variety of devices.

I did experience a couple of quirks regarding OS-specific keys however. Mute didn’t seem compatible with the Android devices I tested, whilst the multimedia keys needed to be remapped for use within Kodi. Keeping the Android mapping allowed them to work fine on Kodi for Windows which was interesting. 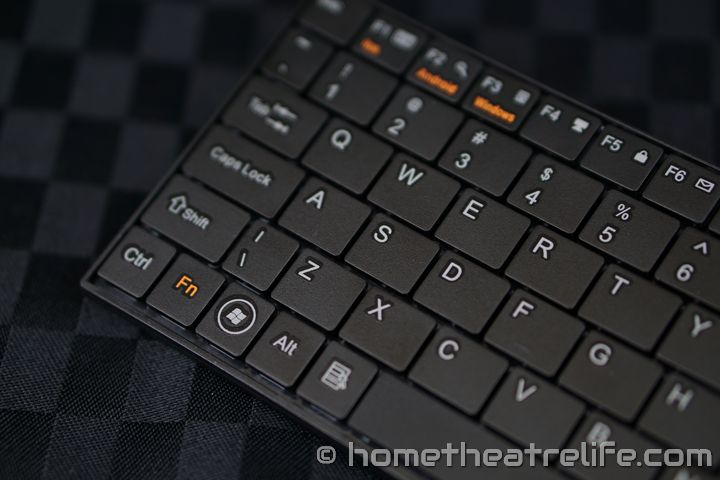 The most unique aspect of the device, the integrated touchpad, is great. It feels is accurate and making precise movements was as good as any other touchpad I’ve used.

You do need to get used to using various gestures and taps to use it effectively however. Tapping left clicks, double-tap and hold allows you to drag and a three-finger tap right-clicks. Two-finger scroll is also supported.

However, whilst the touchpad supports multi-touch, I couldn’t get pinch-to-zoom working at all on my Teclast X80HD running Windows 8 and Android so I suspect it’s not supported.

For those of you needing to enter numbers, swiping the mode switch at the top turns the touchpad into a numpad. It’s handy but it’s nowhere near as good as tactile keys.

Range was impressive during testing. Whilst the specs state 10m, I was able to exceed this through a wall or two on my iPhone 6 and still have it working well. Those of you wanting to use this as a HTPC keyboard should have plenty of range to spare.

Battery life seems good. After numerous hours of use, the keyboard is still working. Plus, as it runs on AAA batteries, a quick battery swap gets you back up and running.

I received my iPazzPort Mini Bluetooth Keyboard from Pandawill. Click here to view the latest price.

iPazzPort Mini Bluetooth Keyboard
At under $25, the iPazzPort Mini Bluetooth Keyboard is a good addition for those wanting a portable keyboard for your HTPC or with devices such as smartphones and tablets. The touchpad works well and it's impressive that the keys can be remapped to fit specific OS's. However, its lightweight build quality makes it feel like it was built to its price. Furthermore, those needing to type longer text would be better suited with a larger keyboard.
Pros
Cons
7.4