It can be a nightmare trying to find a good Bluetooth controller for your phone, tablet or mini PC. And whilst touch gaming is acceptable, nothing replaces the tactile feel of a gamepad. I had a chance to test out the iPega PG-9025, a Bluetooth gamepad featuring dual analog sticks and media playback buttons. iPega have a history of developing a number of Bluetooth controllers that boast iOS and Android compatibility out of the box and the PG-9025 is no different.

I want to say thank you to Tmart for providing me a sample to review. You can purchase one from them here. 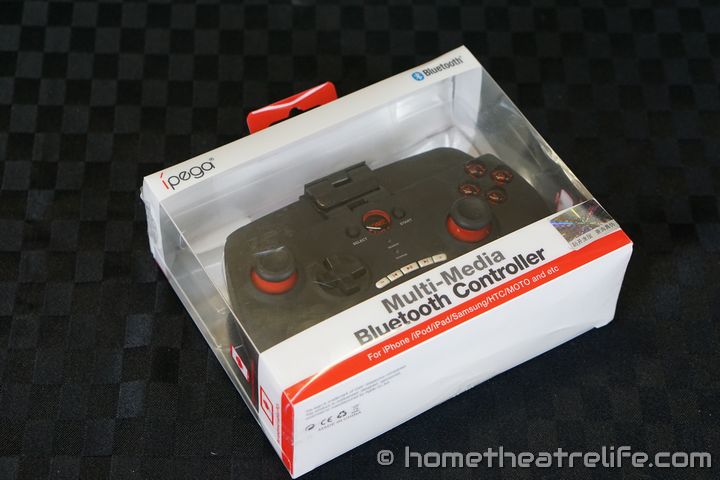 The iPega comes with the basics you need to start gaming: 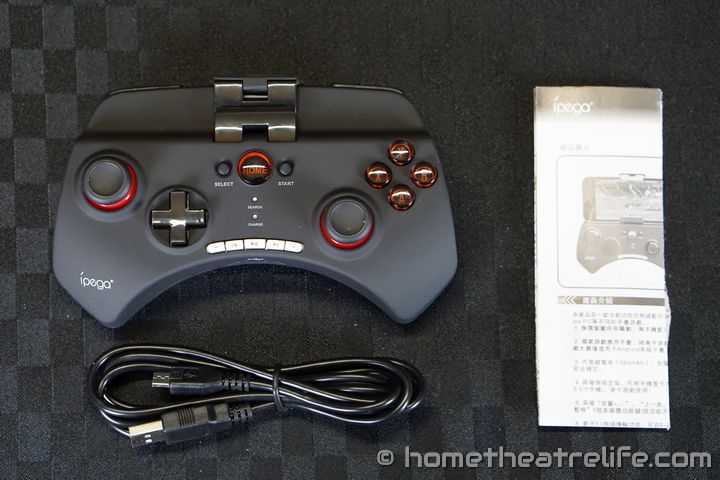 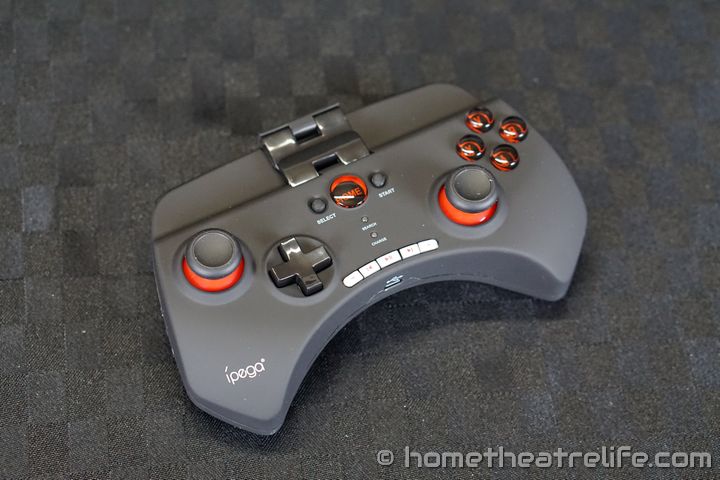 The iPega PG-9025 definitely follows in its predecessors steps, the PG-9017, and at first glance, you’d almost get the two confused.  The iPega PG-9025 adopts a layout almost identical to the Xbox 360 controller. Using the familiar “boomerang” silhouette, gamers will be at home with the dual analog sticks, d-pad, and the start select, shoulder and face buttons. All the face buttons and the devices home button are made of a nice, transparent plastic with the labels under the surface. It all looks very nice.

A set of media player buttons, consisting of volume, skip and play/pause, are located between the d-pad and right analog stick.

The shoulder buttons (note: not triggers) are located at the top and rear (?!) of the device. L1 and R1 are located at their usual locations, however, in order to allow for the phone mount on the device, the L2 and R2 buttons have been moved to the back. They remain relatively comfortable to press and your fingers rest nicely into their contours but I still felt like I was making a bit of a claw to press them. A reset button also makes an appearance here, allowing you to reset the device should anything strange happen.

The top of the device features a spring-loaded telescopic device holder that’s capable of extending far further than expected. I decided to test out just how much the phone holder could take and there was no issue with the Samsung Galaxy S4. I had plenty of room to spare – perfect for those with phablets. Rubber grips hold the device into place and I didn’t have any concerns that the phone would fly out during a particularly vigorous gaming session. 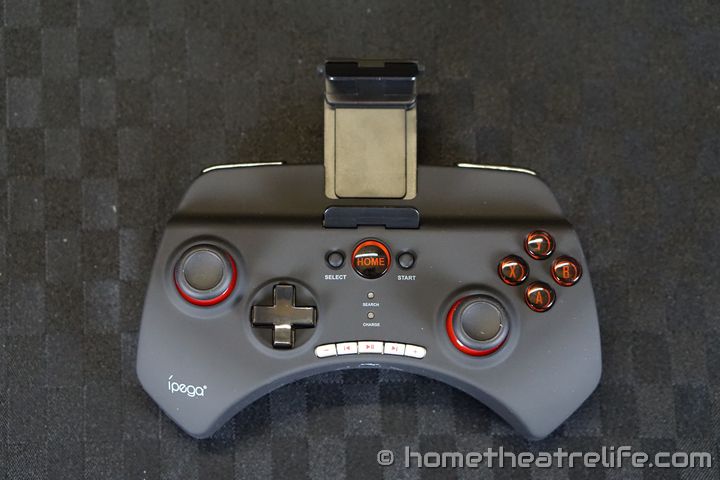 The device has two lights on the front of the device. The search light will blink orange when connecting via Bluetooth and turn solid when paired. A charging indicator below illuminates when charging the internal battery via the bottom micro USB port.

Whilst its not the smallest controllers, it’s probably about 2/3rds of the size of your standard Xbox 360 controller and roughly the size of the Moga Hero Power. I’d definitely still consider the whole thing portable however, and it would make an ideal partner for gaming on the go.

The whole thing feels very solid and not cheap at all. The device has a comfortable grip, using a rubbery plastic which ensures no slippage if you get sweaty hands.

The first thing I did after unboxing the device was plug it in to charge the inbuilt 380mAh battery using the provided USB cable. After about two hours, the charge light went out to signify charging was complete and I was ready to go.

The iPega PG-9025 supports a number of modes, which grants it compatibility with such a large number of devices. Holding a face button and holding down the Home button will switch modes and begin the syncing process: X for Android gamepad, A for Keyboard, B for iCade (iOS) and Y for a touch mode which uses a separate APK driver.

Connecting the device to Android was painless, using a Galaxy S4 as a guinea pig. Holding down X and Home, the device appeared as an “ipega media gamepad controller” in the Bluetooth menu. Clicking on it caused the two devices to pair and we were ready to go.

I opened up Beach Buggy Racing and the iPega PG-9025 was recognized as a connected gamepad automatically. Racing was great, with the controller feeling responsive and lag-free. Moving across to Mupen64+AE, I had no issue mapping all the keys and analog sticks.

Testing the media controls, I jumped into our old friend Kodi to see how if it worked. Thankfully, it did, with the volume play/pause and skip buttons working perfectly!

Some people mentioned that they had issues with the on-screen keyboard not appearing with the gamepad connected but I had no issues.

Connecting to an iOS device was painless. Using an iPhone 6, holding B+Home caused the “ipega media gamepad controller” to appear in the list of Bluetooth devices. A touch and the controller was synced.

iOS compatibility needs a little explanation. Prior to Apple’s official controller support in iOS7, the iCade standard was developed and the iPega PG-9025 supports it but not Apple’s official API. Luckily, there are plenty of excellent games out there that support iCade so you should have no issue using this controller. Just check that your game is iCade compatible first. I tested out No Gravity and had no issues blasting enemy ships out of the skies and many more popular titles are supported.

I paired the controller with a PiPO W2F Windows 8.1 tablet without any issue. For games where you can remap the keys, the controller worked perfectly. Those that didn’t (Asphalt 8, I’m looking at you!) weren’t really playable as the controller keys were different from those expected by the game.

But how does it feel?

So everyone’s probably wondering “how does it feel to use?”. Thankfully, I can say pretty darn great. There’s a healthy amount of resistance in the analog sticks ensuring that movements are nice and precise. Releasing them causes them to promptly snap back into position. The face and shoulder buttons feel nice to press and respond well.

I never had any concerns about lag and it was great being able to connect my phone wireless and have a portable gaming console or connect it up to my Android PC and play games from the comfort of my couch. Bluetooth means there are no wireless dongles to lose or take up those precious USB ports either.

However, all is not perfect. I did find the d-pad a little stiff at times, meaning that a little extra pressure was required than I’m used to. It’s also only 4-way, making some of those Street Fighter special moves a little tricky at times due the lack of “true” diagonals.

The face buttons do have a tendency to be a bit louder than its console brethren too, with a slight “click” when pressed. Lastly, the odd placement of the L2 and R2 buttons make them slightly difficult to press and I could see situations that required them to be held down for long times could get uncomfortable after a while.

My iPega PG-9025 was provided by Tmart and you can purchase one from them here.

Alternatively, you can purchase one from GearBest, Geekbuying, or [amazon text=Amazon&asin=B00GNXMXA8].

iPega PG-9025
The iPega PG-9025 is pretty impressive, particularly its diverse compatibility. Those using several platforms will be well looked after. The controller was fairly comfortable and performed really well, even though it is let down slightly by some odd button placements. Its perfect for Android users wanting portable gaming or a cheap wireless controller for their mini PC. iOS users are trickier however. Fans of iCade games are well served, but those who desire future compatibility may need to look at the (admittedly far more expensive) MFI controllers.
Pros
Cons
8