Android TV boxes keep evolving and it is amazing what just 12 months can change. With original MK808B not being as fast as I wanted, I decided to invest in the new MK808B Plus from Geekbuying. The MK808B Plus is a quad-core Android mini PC powered by an Amlogic M805 chipset with quad-core Mali-450 graphics and runs Android KitKat 4.4.2. The inclusion of H.265 hardware decoding and quad-core CPU/GPU crammed into the same tiny enclosure of the original MK808B for only $50 was pretty irresistible. Couple that with DNLA, Miracast, built-in wifi and Bluetooth 4.0 and you have a unit capable of playing almost anything you throw at it.

The MK808B Plus can be purchased my MK808B Plus from Geekbuying, GearBest, [amazon text=Amazon&asin=B00PU52CGA] and eBay

For those who’ve owned an MK808B (or the numerous clones out on the market), the MK808B Plus is packaged identically. Not much has changed in terms of the box, highlighting key features such as: KitKat support, 1080p output, H.265 video decoding and quad-core chipset.

Inside the box, you have all the key items to get yourself started:

I need to highlight a small frustration here – the included mini HDMI cable is tiny! For me, I had to have the device awkwardly hanging from the TV which didn’t look great. Fortunately, I had a [amazon text=mini HDMI to HDMI adapter&asin=B002QK4AV2] handy which allowed me to connect a much longer cable.

Opening the packaging, it was interesting to see that the MK808B Plus uses almost identical casing of its older sibling, the MK808B. The only difference that I could note is the updated branding on the front of the unit, the added H.265 Decoding branding on the rear and the labels are now embossed rather than printed on. The device has a lovely rubberised coating that has a really nice feel to it – much like the back of the original Nexus 7. It’s a nice touch, despite having no impact on how the device actually performs.

The device is incredibly light – so light that it can easily moved by weight of cable. However, once it settled into position, moving wasn’t an issue. The flipside of this, is that the device is so easy to transport that you essentially have a go-anywhere media player and game console – Perfect for holidays.

Ports on the MK808B Plus are on pretty much every side of the device, causing it to look like a bit of a spider when everything is plugged in. Whilst this is the same issue as devices such as the Raspberry Pi have faced over the years, it is not really a big issue to most, particularly given the device can easily be hidden away. 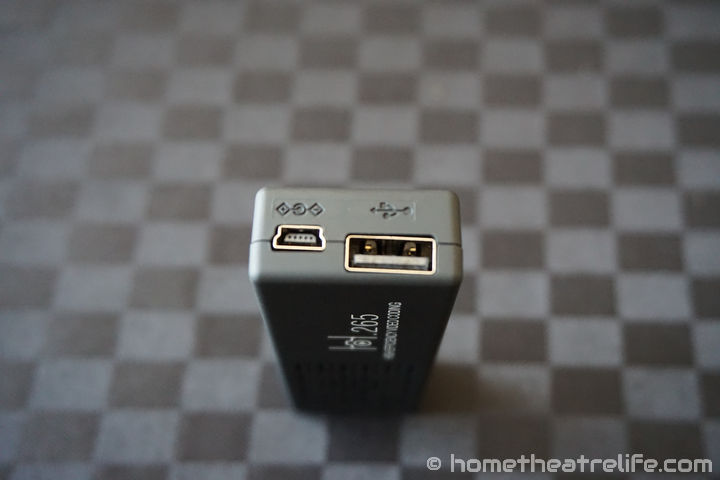 The left of the device  has a mini USB port for power and a full-sized USB host port. This port can be used to plug in various USB devices such as harddrives, controllers, keyboards or mice. The bottom of the device has a micro SD card slot which supports up to 32GB. I’m keen to try the slot with a higher capacity card but I didn’t have one on hand at the time of writing. To the right of the device, we have  a mini HDMI port. It is disappointing to see that a less common HDMI port was used but I can understand given the space constraints. Fortunately, a [amazon text=cheap mini HDMI to HDMI adapter&asin=B002QK4AV2] can be used to replace this.

The top of the device has a mini USB OTG port – again allowing other peripherals to be connected. This effectively gives the tiny MK808B Plus two full size USBs to play with which is great, allowing you to connect a keyboard/mouse combo plus a game controller.

There are two small holes on the rear of the device – one is the power light which glows blue when the device is switched on. The other is the reset button which allows you to access the bootloader and flash firmware updates.

Unfortunately there is no power button on the device – it simply boots as soon as you plug it in. Clearly, the device is designed to be constantly powered on. It does appear that I can get the device to shutdown by holding the power button on my Measy RC11 Air Mouse for several seconds, however, this functionality depends on the remote you have.

The first boot was ok, taking 33 seconds to get to a usable state. The device automatically set the resolution to 1080p  Checking the settings, my MK808B Plus was already running the latest 107k4 firmware. This is good news as some of the changes listed appeared quite valuable, such as improved launcher performance.

The MK808B Plus boots directly into the MediaBox launcher which has been appearing on most new Android devices. This user interface is much more appealing than the stock Android launcher for TV use. It neatly divides apps and settings into logical categories that can be easily navigated with a remote. One unique button on the menu was a “Clean Memory” function which I haven’t seen before. I am guessing this runs a garbage collection routine but I’m didn’t notice any dramatic improvements when running it. 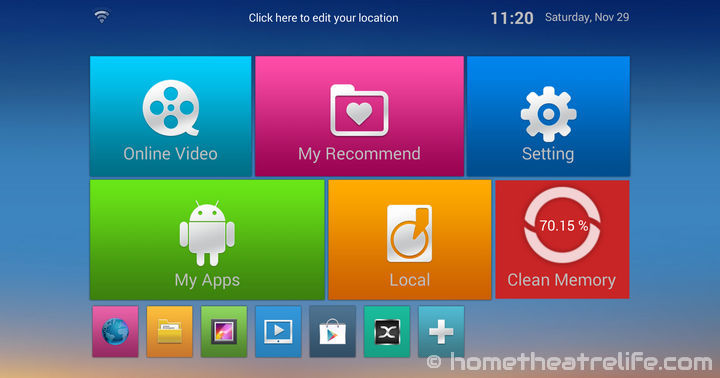 There is a HDMI CEC option but I need to experiment with this further to see if I can get it working with my TV.

The device comes with the Google Play store, Netflix, YouTube, a fish game and what appears to be a stock version of XBMC Gotham 13.2 pre-installed.

To test media playback, I first employed Antutu’s Video Tester 2.2. This application runs through a number of video files with different codecs and outputs the results: 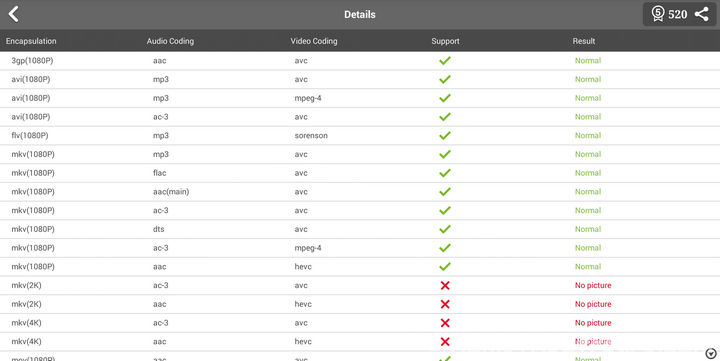 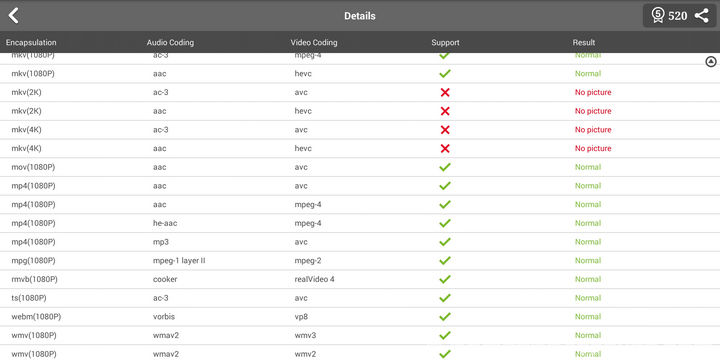 As expected, the device wasn’t able to decode content higher than 1080p – aligning with the specs of the M805. However, given the lack of 4K content and the price of the device, I’m definitely not disappointed.

I also ran some additional video files through the device – both via the in-built media player and the included XBMC build.

The device played most files without issue. The only two that had issues was the 1080p VP8 version of Big Buck Bunny which was dropping frames constantly. The HEVC Sintel file played without issue in the in-built media player however, only audio was played in XBMC. Given that H.265 is only available in Kodi Helix builds, this isn’t surprising. Playback of the HEVC file on SPMC, the XBMC Android fork, was fine.

DLNA and Airplay are handled by the “media center” app. I had no issues streaming video or audio via DLNA. Airplay seemed to work fine for audio on iOS8 but I was only able to get airplay video working on iOS7. It appears that broken Airplay video is an issue with iOS8 rather than the device itself.

I ran a number of common benchmarks on the device to get an understanding of how the MK808B Plus compares to other Android devices.

My Antutu results corresponded nicely with those achieved by GeekBuying, with the device achieving 16661 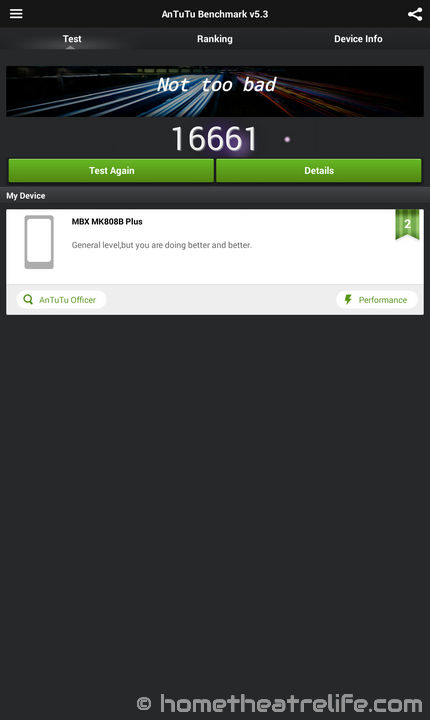 Epic Citadel clocked an average framerate of 23.2 fps at 1008 which isn’t too bad. 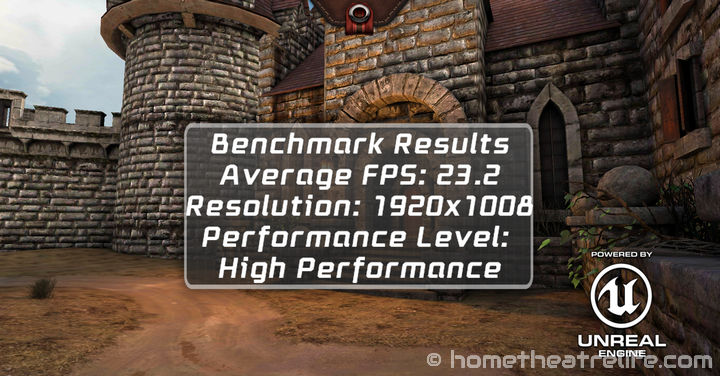 Nenamark 2 returned 37.5 fps, which again isn’t too bad for a device in this price range. 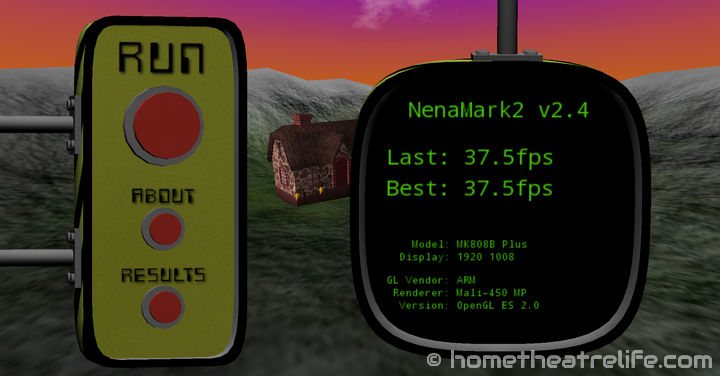 3D performance wasn’t as impressive. Running Fred ran nicely, offering a very smooth gaming experience with only the occasional hiccup. Beach Buggy Blitz was another story however. Whilst I could get a respectable framerate, it was only when I had turned down the graphics to the minimum. Given that the device only costs $49.99, I can’t say I am too disappointed.

Emulation performed well on the device, getting respectable framerates from Mupen64+ with only occasional slowdown.

I tested the Sixaxis Compatability Checker and the app reported that the MK808B Plus was compatible. 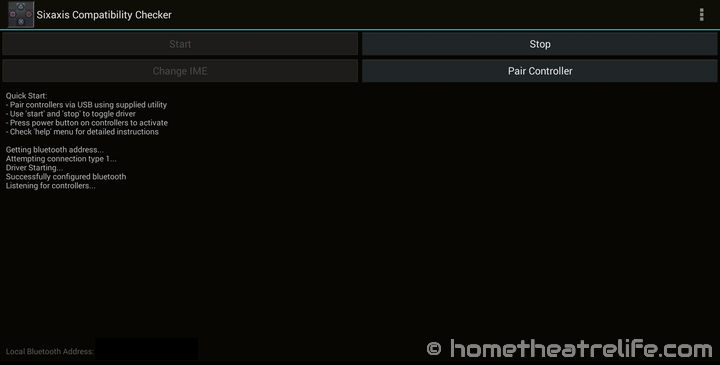 I also connected my [amazon text=Moga Pro Power Controller&asin=B00FB5RBJM] via Bluetooth and had no issues pairing it with the device and experienced no noticeable lag during my gaming sessions.

Temperature and overheating is always a concern with these Android Mini PCs. Over the course of several hours, I ran a variety of tests, some gaming and watched some videos. After all of this, the MK808B Plus was only warm to the touch so, at this stage, I’m not concerned about temperatures.

I did have some issues with wifi initially connecting at only 5Mbps, however, after a few minutes this climbed to 26Mbps. Wireless link speed appears to cap out at 65Mbps. Signal strength was consistently high the entire time however.

To test wireless speeds, I used WiFi Speed Test to transfer a 100 MB file to and from a Samba share. This test was completed 3 times and the average speed was recorded. This yielded an average upload speed of 5.4 Mbps and a download speed of 4.5 Mbps.

An important thing to note is that wifi speeds are affected by a wide variety of factors such as network equipment and environmental interference so your results may vary.

I was able to connect a USB thumbdrive and play media files off it without any issue. I also connected a 2.5″ portable harddrive and was able to play videos from it without issue.

Getting an MK808B Plus

I purchased my MK808B Plus from Geekbuying. Click here to for more information.

It is also available from GearBest, [amazon text=Amazon&asin=B00PU52CGA], AliExpress and eBay. The links will take you directly to the MK808B Plus page.

I’m pretty impressed with the Mk808B Plus with its excellent media support and capability for some light gaming. Let me know if there is anything else you would like me to test/other benchmarks in the comments below and I’ll update the review.

MK808B Plus
The MK808B Plus offers exceptional value for money. Combining strong media playback cababilities, support for gaming and a wide variety of connectivity options for a bargain price, I can't help but recommend the MK808B Plus
Pros
Cons
8.6

MK808B Plus Unboxing and First Impressions