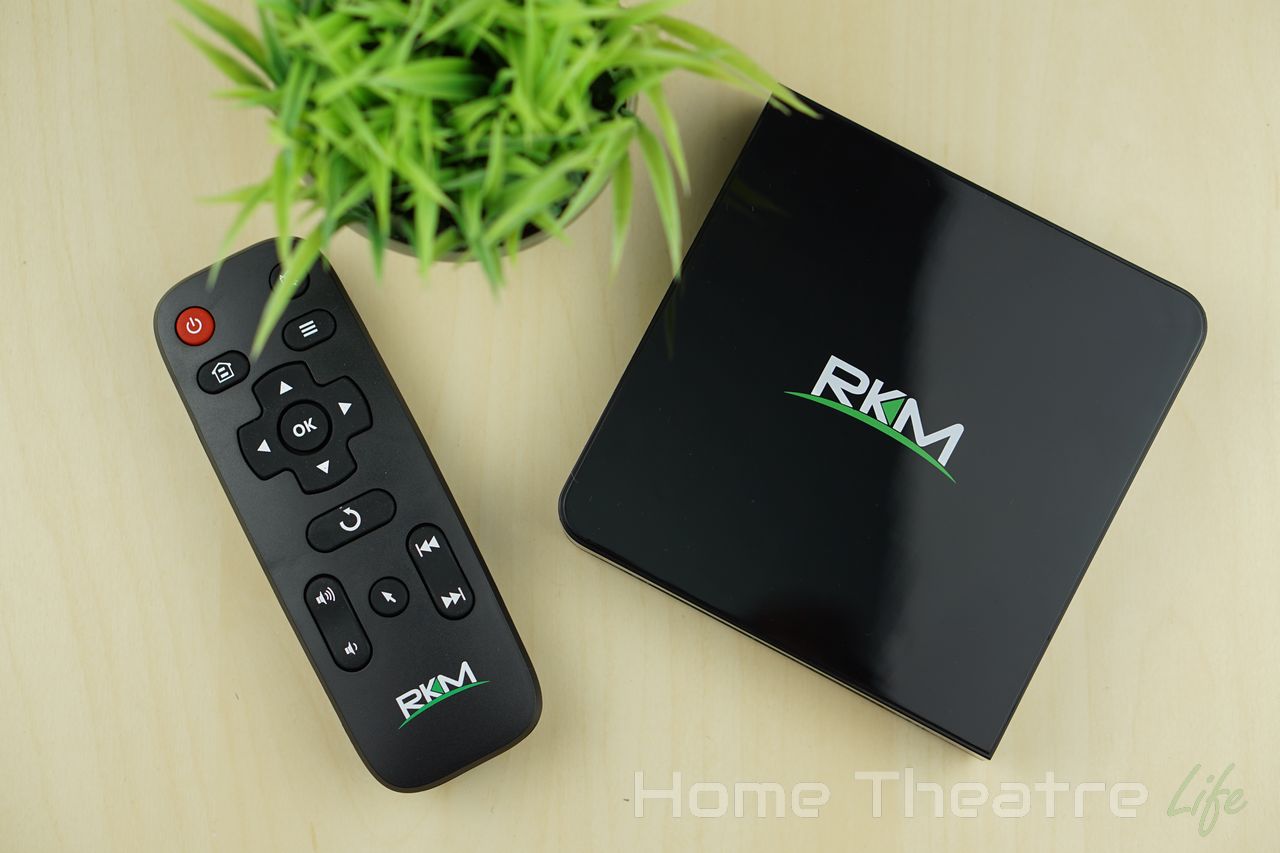 The Rikomagic MK06 is the company’s latest Android TV box and their first using the quadcore Amlogic S905. Opting for lower-end specifications with a price to match, is Rikomagic’s latest device a winner? Read our Rikomagic MK06 review to find out.

Thanks to Rikomagic for sending me a sample to review. Rikomagic have provided a fairly comprehensive set of inclusions in the box: Rikomagic have played it safe with the design of their latest Android TV box. Reusing the case from the MK12 and MK68, the Rikomagic MK06 is a black square with a single rounded corner.

The top plate features a subtle geometric pattern and the whole unit is made of glossy plastic. Unfortunately, this means its probe to fingerprints so you’ll need to to keep it clean.

The design itself is unobtrusive however and fairly practical, with ample room to plug in cables and USB devices that you need to.

Ports are located on the left and rear of the unit. The left side houses two fullsize USB 2.0 ports and a micro SD card slot. Jumping over to the rear of MK06, there’s DC In, optical audio, Ethernet, HDMI out and another fullsize USB 2.0 port. Rikomagic have continued their “reuse” approach, packing in the same IR remote we’ve seen with their other Android boxes. That’s not necessarily a bad thing, as I’ve always found Rikomagic’s remotes pretty decent.

All the key functionality is here, with Android commands, directional buttons and volume controls. There’s even a mouse mode if you need it, though is suggest forking out for an Airmouse such as the Rikomagic MK705 for a much better experience. Thankfully, the buttons are pretty quiet, unlike some of the cheap included remotes I’ve seen to date so they’re not distracting when used. Range was fine, able to reach across my lounge room with ease.

The Rikomagic MK06 boots automatically when plugged in. A cold boot takes around 59 seconds With a wireless keyboard and mouse plugged in. Resuming from standby is instant.

The Rikomagic MK06’s UI is the same as we’ve seen on previous models, with various tiles for key apps, themed collections of apps (such as games) and the app drawer. There’s a few preinstalled apps, with Kodi 15.2, Media Center, Miracast, Skype and, interestingly, iPerf all making an appearance. Kodi 15.2 came with a whole bunch of add-ons preinstalled so I simply uninstalled it and installed a stock version of Kodi 16.0 from the Google Play store.

Speaking of the Google Play Store, it works and the device is rooted out of the box for those that need it. HDMI CEC is supported and worked well with my Samsung TV, allowing me to use the TV’s remote to control the Android box.

The MK06 also features a single 4.08GB partition with 3.5GB free out of the box, making it much easier for users to use all of the included storage how they want. 3.5GB isn’t a lot though so you’ll need to be mindful of how many apps you need to install.

The Rikomagic MK06 is also the first Rikomagic box to come with OTA update support. Unfortunately, I didn’t have a chance to actually test it as my box was already pre-installed with the latest firmware. The firmware feels pretty stable. However, I did occasionally experience a several-second pause when exiting apps sometimes. I also had issues with luckluster 3D performance and benchmarks failing (more on that below). The Rikomagic MK06 came preinstalled with Kodi 15.2. However, I had issues with video only rendering in the top left of the screen. Updating to Kodi 16.0 via the Google Play Store seemed to fix the issue so I’ve used that version for my testing.

Media playback was generally good, handling all of the most common file formats with ease. Despite using the Amlogic S905 like a number of other Android TV boxes, the Rikomagic MK06 performed worse than other boxes I’ve tested to date.

Whilst the simpler Jetpack Joyride was perfectly smooth, playing Beach Buggy Racing at 1080p on maximum settings struggled to achieve a playable framerate. Lowering the graphics settings to the default lead to a much more pleasant experience.

SixAxis Compatibility Checker reports that the MK06 should be compatible so you should be able to hook up your PS3 controller via Bluetooth. Wireless performance was pretty good on the Rikomagic MK06, with upload and download speeds of 40.6Mbps and 49.8Mbps respectively.

In terms of real world performance, I was able to stream 1080p and 4K H.264 videos from my NFS share without buffering. However, I did experience terrible buffering at one stage that seemed to resolve itself after a reboot so I’m not sure what happened. Ethernet performance was reasonable, with upload and download speeds of 627.8Mbps and 873.9Mbps respectively.

Benchmarking performance was either on par or lower than other Amlogic S905 boxes I’ve tested to date. Antutu and GeekBench 3 Multi-Core were noticeably lower than competing boxes.

Interestingly, Antutu kept reporting that the MK06 didn’t complete the 3D component of the benchmark, which is why the score is so much lower than other Amlogic S905 boxes.

Furthermore, I wasn’t able to get a score for Ice Storm Unlimited in 3DMark as the benchmark kept terminating before it finished.

Having so many issues with the 3D side suggests there’s either a hardware issue or Rikomagic have a lot more work to do with the firmware. The Rikomagic MK06 is a flawed Android TV box from Rikomagic. It handled media playback well, though no automatic framerate switching in Kodi is disappointing. However, this combined with lackluster 3D gaming performance make it hard to recommend over more polished Amlogic S905 boxes available.

You can get the Rikomagic MK06 from GearBest for around $67.