Home » Reviews » Saitake STK-7007X Review: Is This Telescopic Bluetooth Controller Worth It? 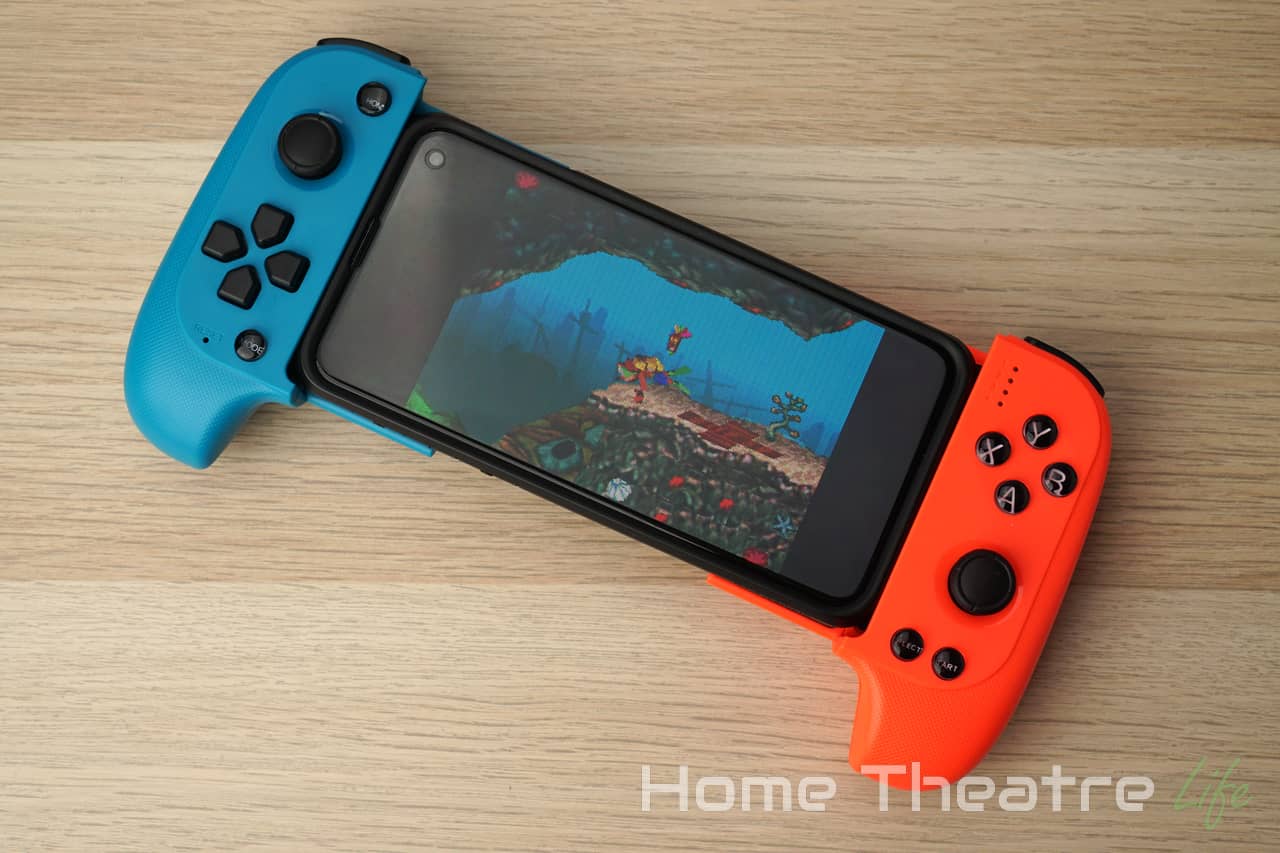 The Nintendo Switch has been a runaway hit for the gaming company, with almost 35 million consoles sold at the time of writing. However, despite its portability and solid gaming library, there’s quite a bit it can’t do – with emulating retro games being the most obvious.

So Saitake have aimed to leverage this by creating a telescopic Bluetooth controller that expands to grip your smartphone in landscape mode to create a pseudo-Switch gaming machine. With its Switch-inspired design and telescopic grip, is the Saitake STK-7007X worth it?

In terms of aesthetics, the Saitake 7007X definitely takes some design cues from Nintendo’s latest console. From the blue/orange color scheme to the asymmetrical joysticks, there’s no doubt that it’s trying to mimic the Switch – though you can get it in black if you want.

There’s the usual array of controls here, including dual analog sticks, d-pad, dual shoulder buttons, start, select and 4 face buttons. There’s also a Home and Mode buttons which toggle through the controller’s various functions (but more on that later).

The shoulder buttons are digital (so no analog triggers) but the joysticks are clickable so you’ve got L3/R3 which covers pretty much every button you’d need.

The buttons themselves all offer a satisfying click to them, though I found the d-pad a little bit mushy. However, it’s definitely not the worst one I’ve used.

The analog sticks are probably the weakest part of the whole package. They have reasonably large deadzones and a bias towards 4 directions. So whilst moving up, down, left or right is easy, diagonals aren’t super precise. Whilst this won’t be an issue for most games, certain titles such as first person shooters felt imprecise compared to gaming on an Xbox One controller.

There’s also 4 LEDs which acts as a mode indicator and battery level meter, and a small reset button in case there’s any issues.

The controller’s built-in 300mAh battery should be good for around 10 hours of gaming, and you can charge it via the common micro USB port on the bottom. It’ll also power down after 5-10 minutes of inactivity to save battery life which is a nice touch.

Using the Saitake STK-7007X is dead simple. After turning it on by holding X+Home to enter pairing mode (for Android devices), I just had to select “STK-7007X” from my smartphone’s Bluetooth menu. The controller will also automatically reconnect to the last paired device so it’s quick and easy to get back to gaming.

There’s a couple of different modes available to Android users including a Digital mode that treats the analog sticks as a d-pad and “Media Mode” which lets you use the left analog stick as a mouse and other buttons for Android functions such as Back and Home which was pretty useful.

It’s even compatible with Windows too. Unfortunately, Bluetooth connectivity isn’t supported on Windows so you’ll need to use a micro USB cable. I thought the left mounted USB port made it feel a little awkward but it’s definitely not a deal breaker. That said, plugging it into my Windows 10 PC detected it as an Xbox 360 controller automatically and I was ready to game in a few seconds which is a plus for flexibility.

While you can use the STK-7007X without your smartphone inserted, sliding in your smartphone provides a much better experience. Simply pull the controller to expand it and insert your phone into the grooves. The controller supports smartphones from 78-160mm so most phones should fit without an issue. I also liked the fact that Saitake included rubber guards to protect your smartphone whilst stopping it from slipping.

The controller grips your smartphone well and there’s not much play in the telescoping mechanism which which is nice. The whole package feels solid when your smartphone is inserted which is really important.

I tested the Saitake STK-7007X on a wide variety of apps:

As the controller is detected as a standard Android controller, most games and emulators detected it out of the box so I didn’t need to do any configuration.

The Saitake STK-7007X is a solid choice for those wanting a telescopic Bluetooth gamepad for on-the-go gaming. Whilst I wish the analog sticks were better, they were functional and the comprehensive features and comfortable grip made for a pleasant gaming experience.

Check Price at GearBest
The Saitake STK-7007X offers a good gaming experience - particularly if you're wanting to use your smartphone like a Nintendo Switch. Whilst the analog sticks aren't as good as controllers such as the Xbox One or Flydigi Wee 2, they're servicable and won't be an issue for most users.
Excellent telescopic mechanism
Comfortable grip
Bluetooth connectivity eliminates cables
4 Way Analog Stick isn't very precise
Bluetooth not supported on Windows
7.4

MECOOL KM3 Review: Is This Android TV Box Worth It?