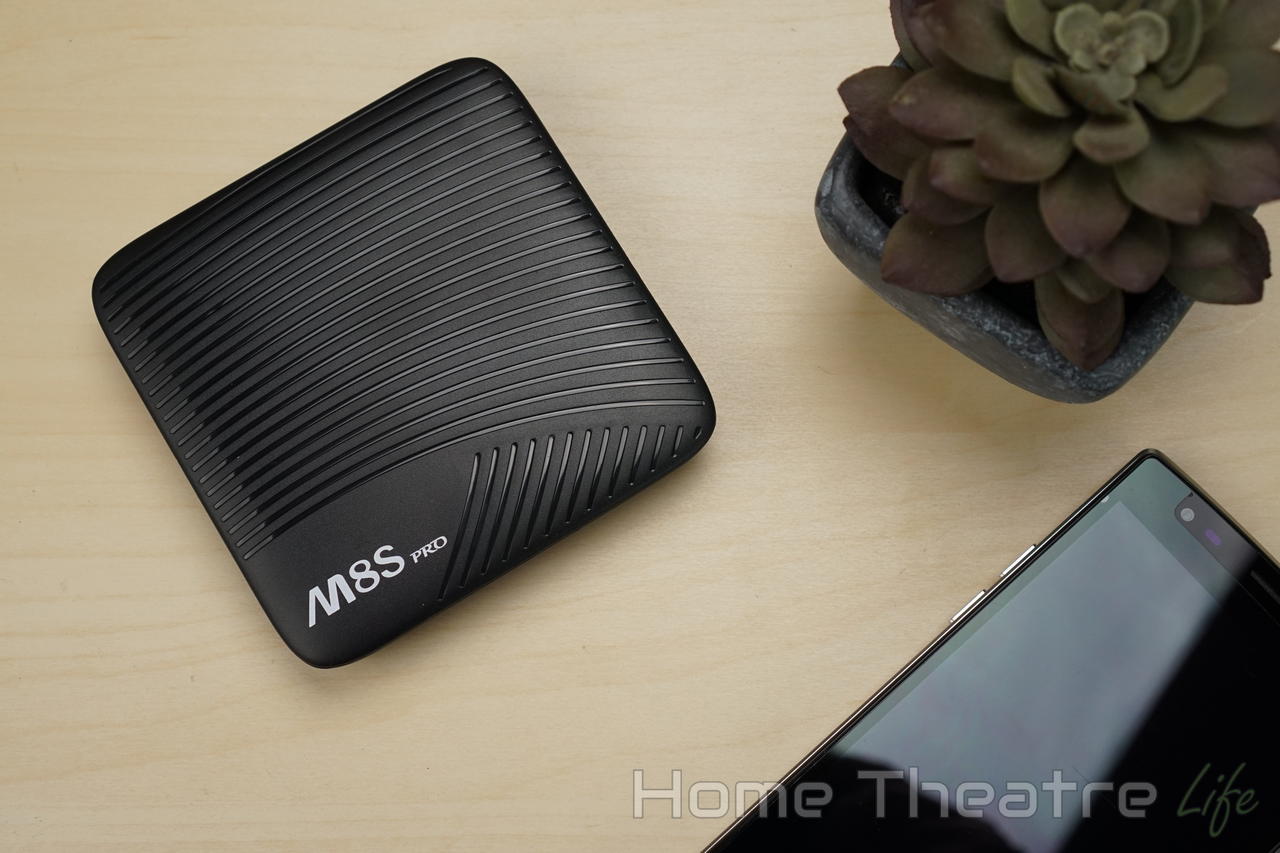 Is it worth it? Keep read my MECOOL M8S Pro review to find out.

What is the MECOOL M8S Pro?

The MECOOL M8S Pro is a new Android TV box powered by the quadcore Amlogic S912.

As an Android TV box, you can hook it up to your TV to watch movies by installing Kodi, play games and use your favourite Android apps on the big screen.

It also runs Android 7.1, which makes it one of the few Android TV boxes to be using the latest version of Google’s mobile operating system.

Where to Buy the MECOOL M8S Pro

The MECOOL M8S Pro is available from GeekBuying for around $55 with free shipping.

Use coupon “VCHMGKYB” to get another $5 off for a limited time only! 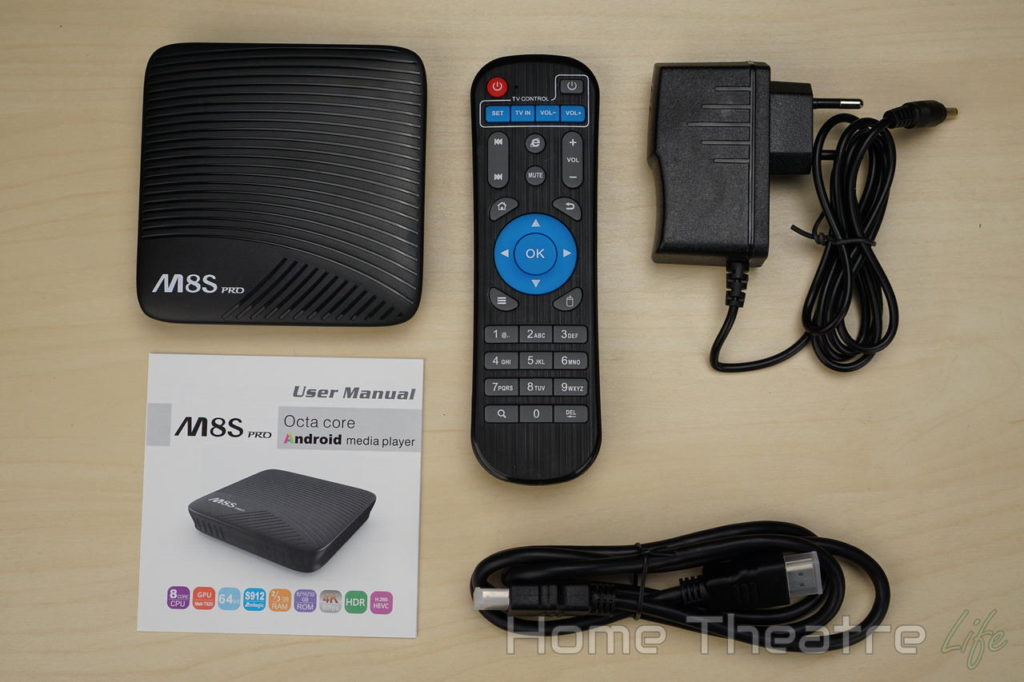 The MECOOL M8S Pro’s a pretty standard looking Android TV box. The plastic case feels a little flimsy, though it does the job.

The left side has two USB 2.0 ports and a microSD card slot for adding storage. Over at the back, there’s composite video output, Ethernet, HDMI out and the power input.

The hardware inside is respectable. The streaming media player is powered by the octacore Amlogic S912 with 2GB or 3GB of RAM and 16GB or 32GB of onboard storage (depending on the chosen model). The onboard storage can be increased by another 32GB by adding an microSD card. 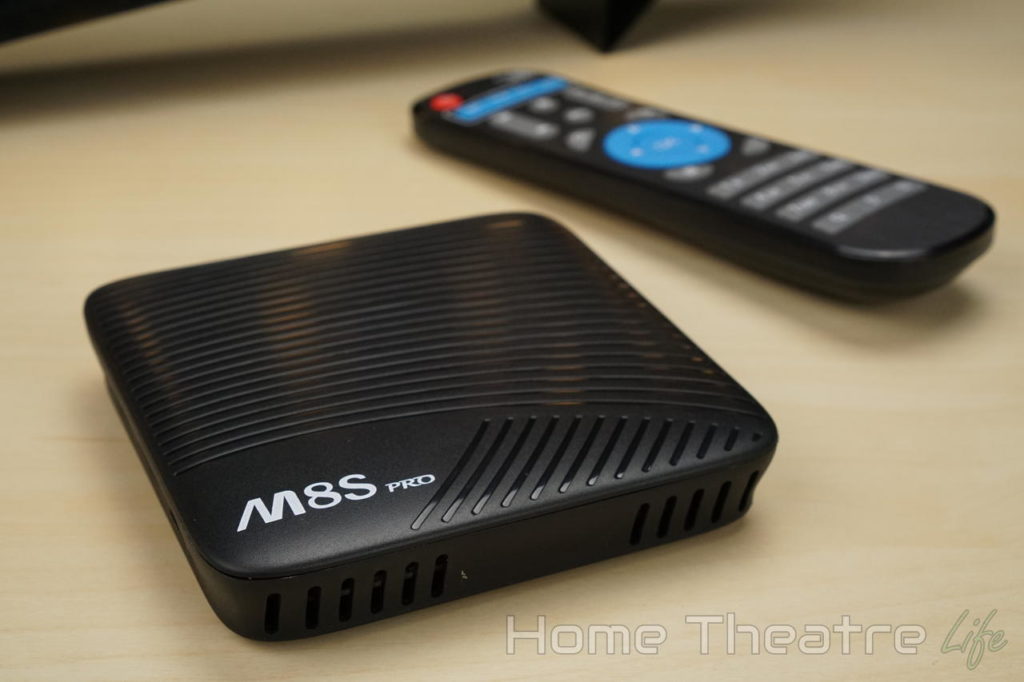 I keep complaining about no front USB ports and I have the same complaint with the MECOOL M8S Pro.

There’s no power button, so plugging in the Android TV box causes it to boot. A cold boot takes a reasonable 22 seconds.

The included IR remote is one we’ve seen before and one of the nicer pack-in remotes. It’s got all the key media and Android keys, a mouse mode and can even learn commands from your other remotes. For example, you can learn your TV’s volume commands and use the MECOOL’s remote to adjust your TV’s volume. Handy. 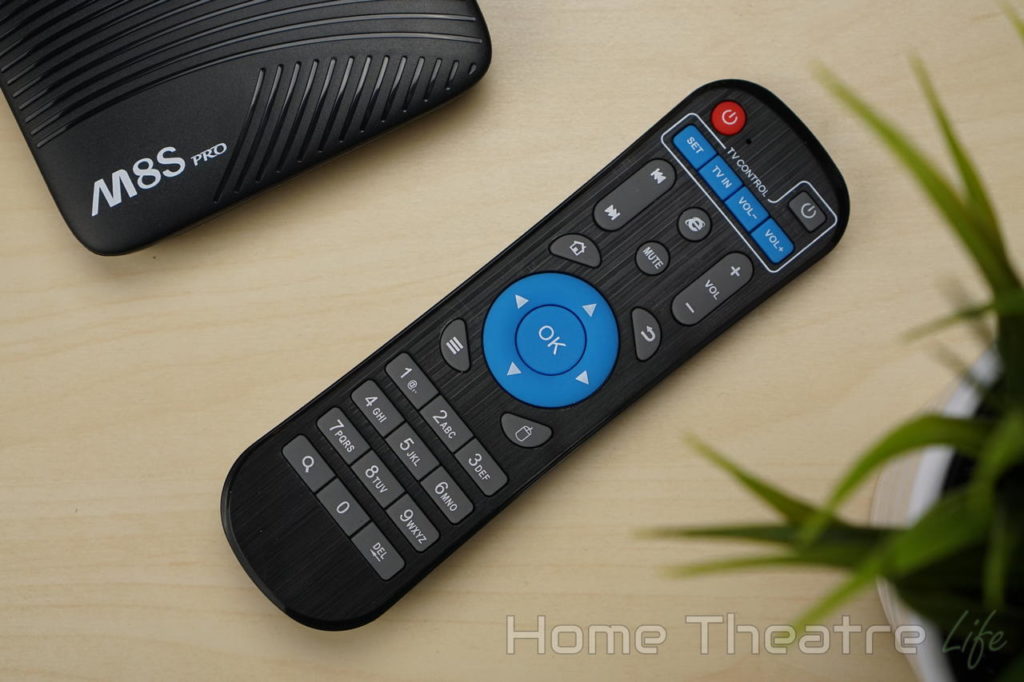 However, if you want the best Android TV box experience, you need an air mouse [amazon text=like this one&asin=B01N0SUUZS] which lets you control your TV box using gestures.

For more information on air mice and my recommendations, read my Best Air Mouse guide).

The MECOOL M8S Pro launcher is on the basic side, with a clean black and white design. However, this simplicity acts in its favor, as it’s very intuitive. 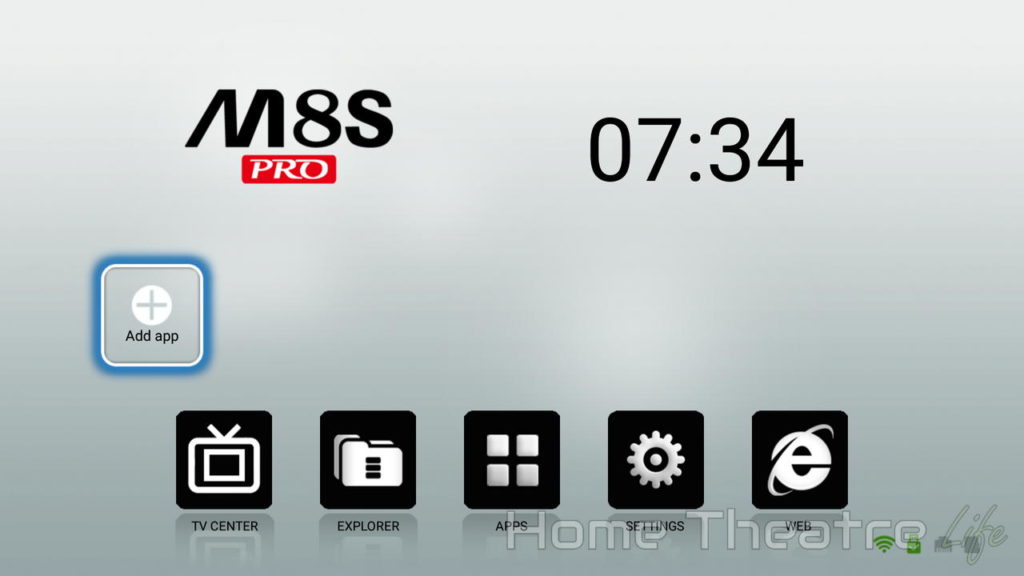 There’s not much in the way of customization, though you can add a row of shortcuts for your favorite apps.

Settings are accessible as an overlay which makes changing settings much faster than on other Android TV boxes. 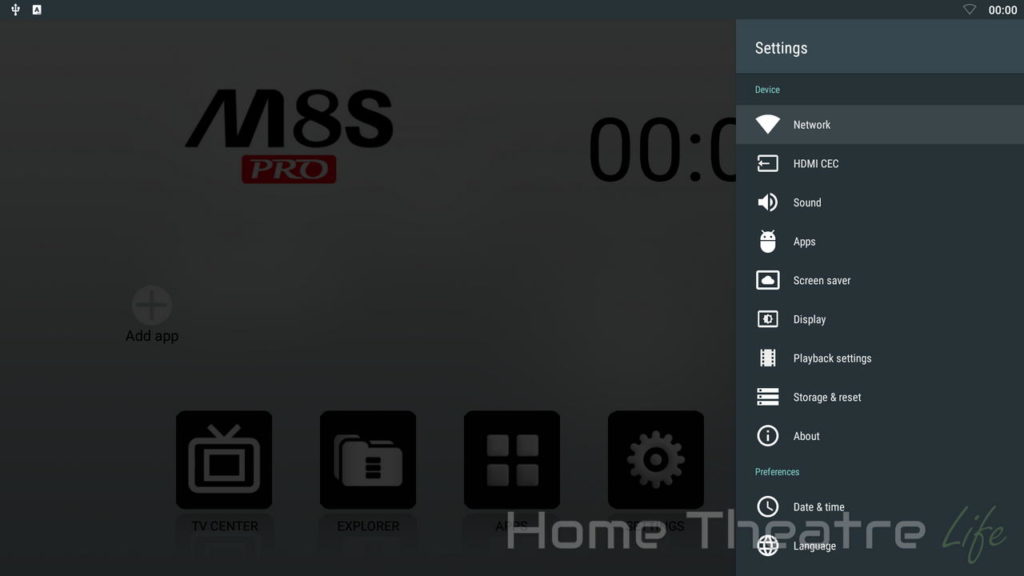 MECOOL has installed a number of apps such as YouTube and Netflix.

I was impressed to see that AirPin PRO is included too, allowing you to use AirPlay mirroring, send videos to the TV box via UPNP and more. It’s a quality app and one I’m glad to see included. 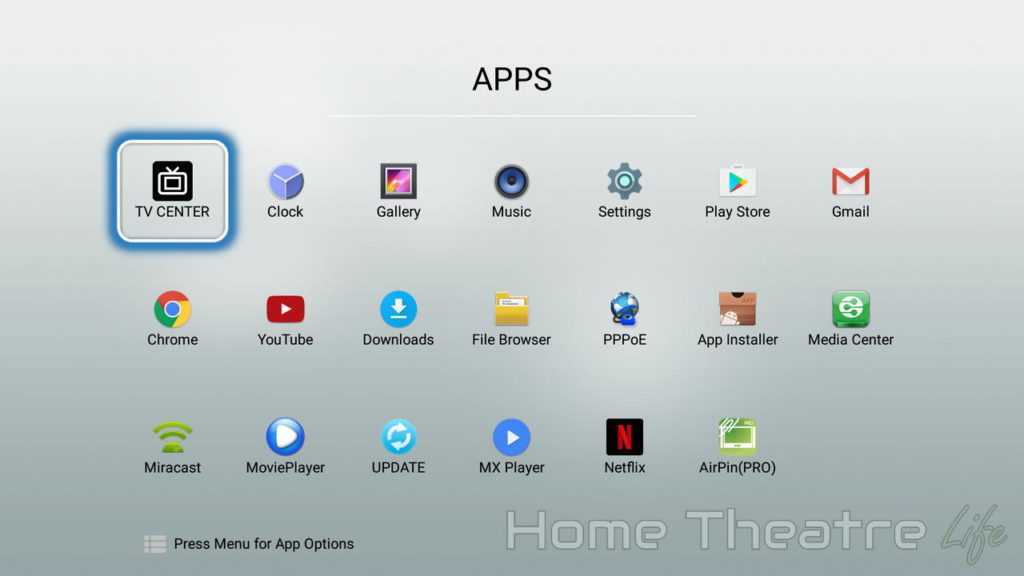 Instead, there’s a shortcut to install “TV Center”, a modified version of Kodi 17.0 that comes with a bunch of questionable streaming add-ons. 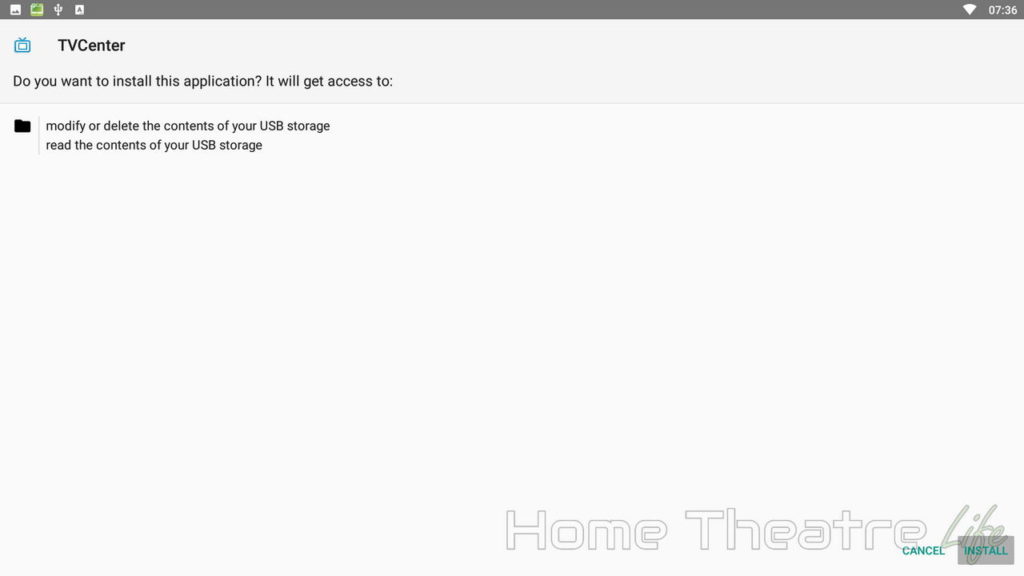 There’s no root out of the box, though this won’t be an issue for most users.

OTA updates are supported, though there weren’t any firmware updates at the time of writing so I couldn’t test out the update process. 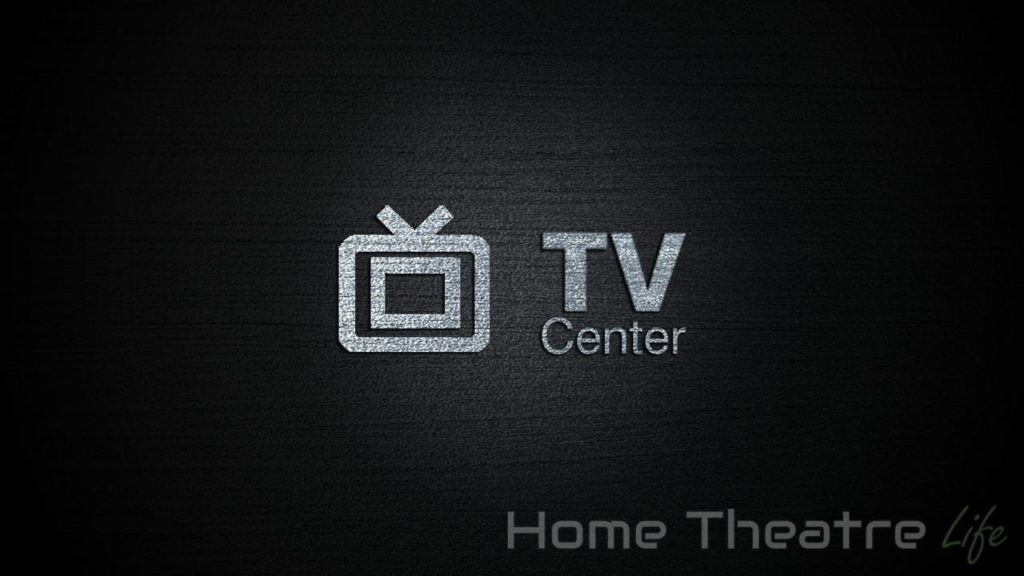 Video playback was tested using Kodi 17.3 downloaded from Google Play, after being setup as normal.

Videos were played from a USB 3.0 hard drive and streamed over wifi from my server’s NFS share.

Overall, the MECOOL M8S Pro’s video playback was good. The most common video played back without any issues, including 4K H.265 videos worked well. The usual suspects caused issues like on pretty much every Android TV box I’ve tested.

I didn’t have any issues with Dolby Digital 5.1 passthrough over HDMI.

Thanks to a recent Netflix change, the current Netflix app wasn’t compatible with the MECOOL M8S Pro. Instead, I needed to sideload an older Netflix APK to get it working.

Once it was installed, streaming movies worked fine, though 4K and HD resolutions aren’t supported as the MECOOL M8S Pro isn’t a Netflix-certified device. 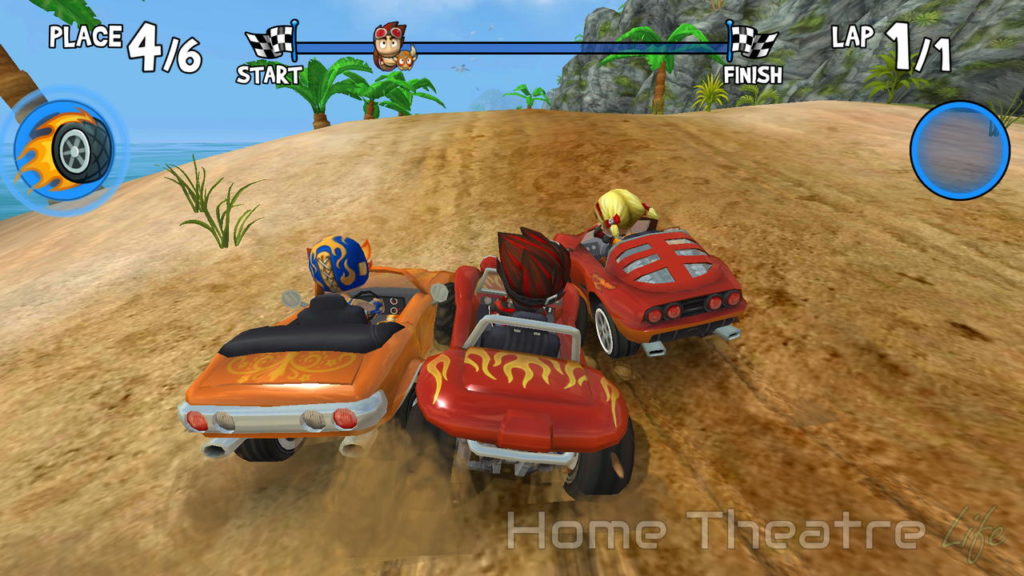 To test gaming performance, I hooked up the awesome [amazon text=GameSir G4S controller&asin=B01HNXGKT6] (read my review) over Bluetooth and installed two games – one 2D and the other 3D:

Gaming performance was on par with other Amlogic S912 TV boxes. The MECOOL M9S Pro had no issues playing Jetpack Joyride and handled Beach Buggy Racing on maximum settings so most games should play perfectly.

Those with more demanding gaming needs should check out the [amazon text=Nvidia Shield TV&asin=B01N1NT9Y6] instead.

Should You Buy the MECOOL M8S Pro? 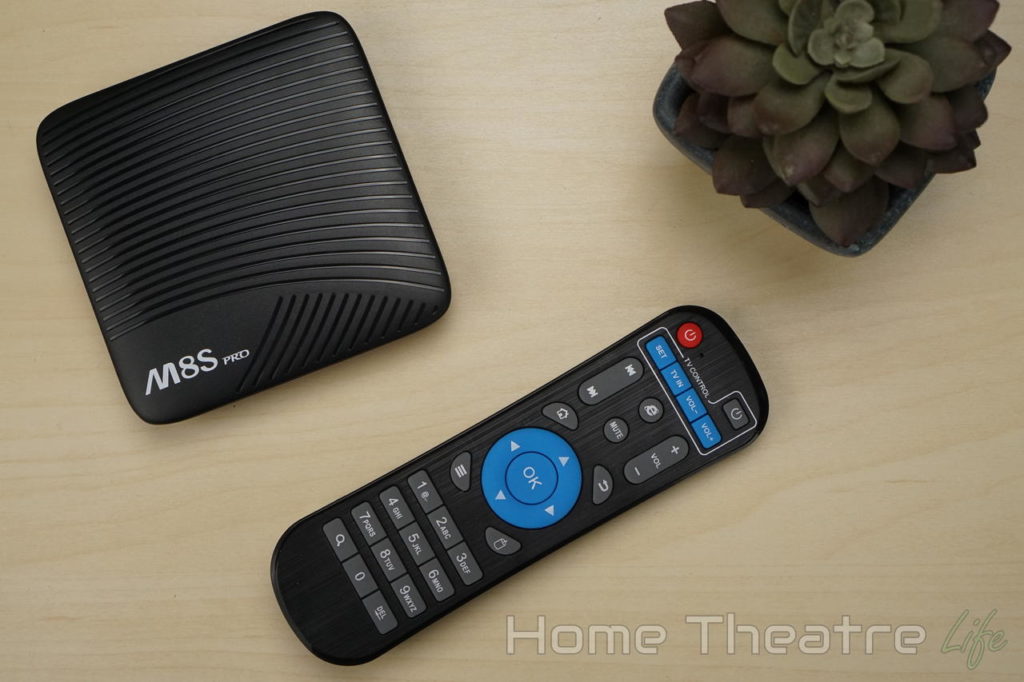 As we’ve found out in during my MECOOL M8S Pro review, this Android TV box puts on a respectable performance in the budget price sector.

For casual media lovers who just want to play or stream movies, the MECOOL M8S Pro does the job without breaking the bank. The fact it runs Android 7.1 is great too, as you should get a little more mileage out of it.

That said, as I always say, home theatre enthusiasts should look at some (admittedly pricier) alternatives, as the lack of automatic framerate switching and HD Netflix support will frustrate some users.

Ultimately, for under $60, you’re getting a streaming media player that can handle some gaming too. Though there are better Amlogic S912 devices out there, it’s hard to argue with the value you’re getting.

Where to Buy the MECOOL M8S Pro

The MECOOL M8S Pro is available from GeekBuying for around $55 with free shipping. Use coupon “VCHMGKYB” to get another $5 off for a limited time only!