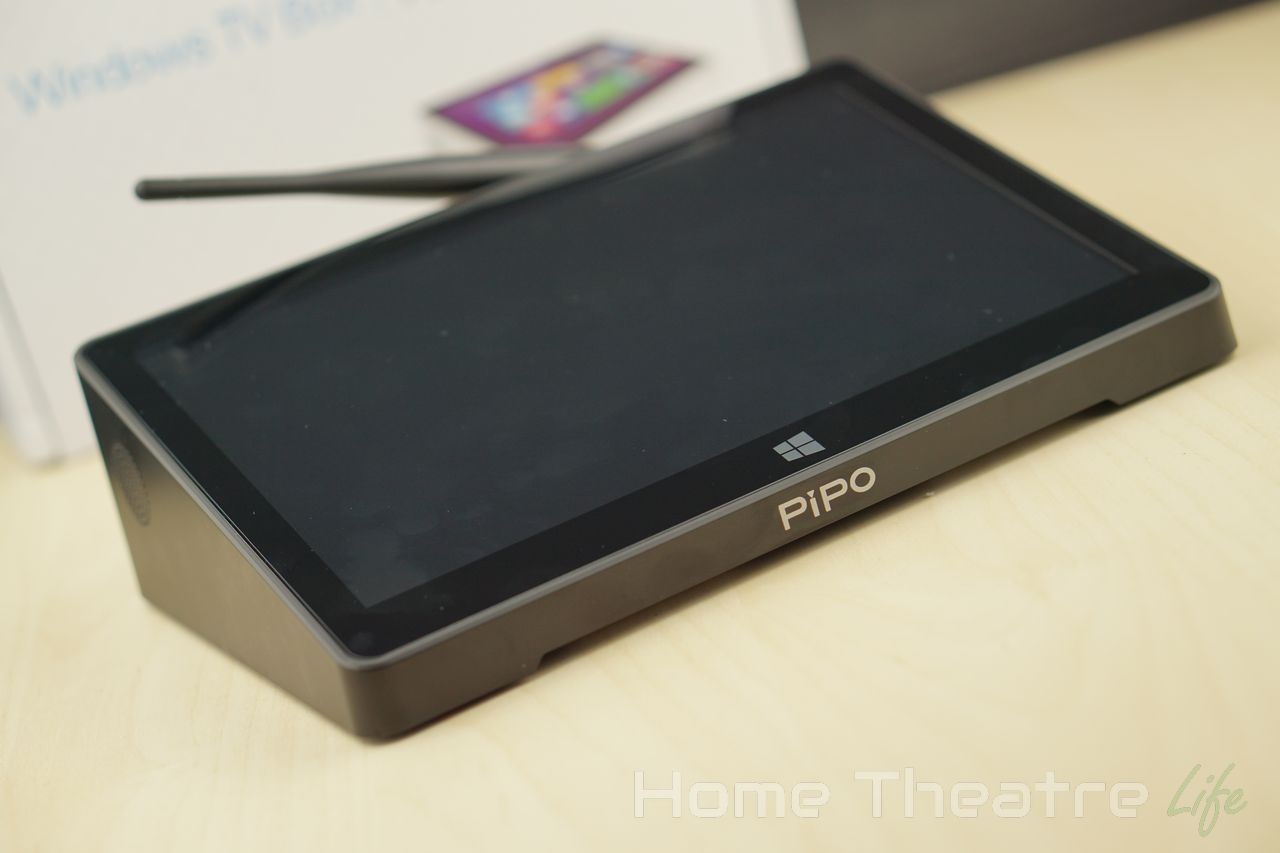 The PiPO X9 looks like someone took the PiPO X8 and hit it with an enlarging ray. It’s an interesting looking black wedge dominated by the 8.9 inch touchscreen. The 1920×1200 screen looks fantastic. It’s reasonably bright and, thanks to its smaller size, looks razor sharp. There’s a Windows logo at the bottom that doubles as a capacitive Windows key.

The ports and buttons on the PiPO X9 are located on the back and right of the unit. On the rear, we’ve got a micro SD card slot, 2 USB 2.0 ports, a HDMI port, Ethernet and DC In. On the right is the power button, volume rocker, 2 additional USB 2.0 ports and the 3.5mm audio output port. There’s also small speakers on both sides of the unit. They’re reasonably loud but suffer from the same fate as most small speakers, lacking bass and sounding a little hollow.

The PiPO X9 booted automatically when I plugged it in. When it first turns on, you’re shown the familiar OS selection BIOS we’ve seen on other dual boot devices. You’re given the option to boot into either Windows 10 or Android 4.4, with a 10 second countdown automatically booting into the last used OS.

Windows 10 was activated and there’s about 13GB free out of the 20.7GB Windows partition.

PiPO haven’t added much in terms of customization.  The only clear addition was the WinToAnd app that allows you to boot into Android directly from Windows. Switching to Android took around 53 seconds.

I did some quick tests using the internal screen. For media playback, I installed Kodi 15.1. Both 1080p and 4K H.264 samples seemed to play back well. 1080p HEVC was hopeless, but that’s because the Intel Z3736F chip doesn’t support HEVC decoding in hardware. In terms of WiFi performance, I was able to stream 4K video from an NFS share without any noticeable buffering.

A quick gaming test was done with Beach Buggy Racing and Jetpack Joyride. Jumping into Beach Buggy Racing in Windows was average, with the frame rate typically sitting just 30 frames per second. I’m wondering whether the slightly higher resolution is to blame so I’ll retest it when the PiPO X9 is connected up to a 1080p monitor to see if performance improves. Jetpack Joyride played reasonably well however. Jumping over to Android, PiPO have essentially kept everything stock, aside from the “OSSwitch” button in the notification shade to boot back into Windows. The Google Play Store works and Android’s rooted out of the box.

I did notice one oddity in Android that didn’t happen in Windows though. Whenever a sound played in Android, the speakers quietly hissed for a second after the audio stopped. I’m suspecting this is an Android driver issue.

Brief stress testing under Windows was done using HeavyLoad. After 10 minutes, temperatures seemed to level out at 74°C without throttling according to HWiNFO. Ambient temperature was 20°C.

The PiPO X9 is an interesting beast. The 8.9 inch 1920×1200 screen looks glorious and is really responsive. From my brief testing, overall performance seemed good in Windows and Kodi.

However, gaming wasn’t as smooth as other devices with the same chip. This could be due to the slightly higher internal resolution than the 1080p I typically test at so we’ll have to see whether switching to an external monitor improves the situation.

Keep posted for the full review.

The PiPO X9 is available from Gearbest in 32GB and 64GB variants.