Every month, we see new Android boxes come out and Rikomagic is no exception. Having made waves with a number of their earlier Android devices, Rikomagic have established themselves as one of the leaders in the Android mini PC space.

The Rikomagic MK12 is their new Android mini PC. Powered by the Amlogic S812 chipset,  the MK12 is armed with a quadcore CP and octacore Mali-450 GPU like its Amlogic S802 predecessors. However, it’s also learned some new tricks, bring H.265 video decoding and Gigabit Ethernet to the table.

I want to say a special thanks to Rikomagic for supplying me with the Rikomagic MK12 to review. You can purchase one from GearBest, GeekBuying, or [amazon text=Amazon&asin=B00REC5Z8Y]. The Rikomagic MK12 is packaged nicely in a simple white box. Inside are a number of goodies: 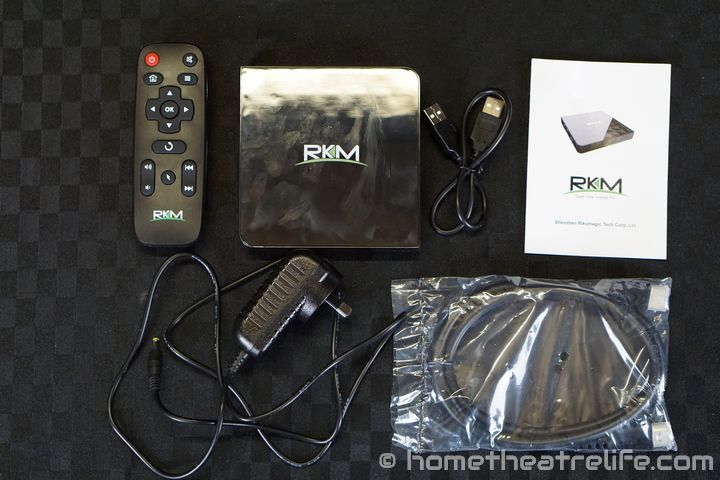 It’s great to see that Rikomagic have provided everything you need to get up and running. The inclusion of a HDMI cable was notably absent with the VidOn Box that I recently reviewed, so kudos to Rikomagic for providing one.

Unboxing the Rikomagic MK12, I was immediately struck at how compact this device is. About the size of your hand, the box is flat and minimalist. If it weren’t for the dull white power light, you’d forget the box was even there. The case appears to be piano black with a high gloss. However, as great as this looks out of the package, I suspect this will be a fingerprint magnet.

This Rikomagic MK12 doesn’t have a power button, like many other Android mini PCs, which could be a pro or con depending on your view. I personally would like to see a power button included on these devices, as it just feels necessary.

The ports on the Rikomagic MK12 are distributed between its back and left panels. On the back panel, going from left to right, you have the DC power input, optical audio output,  Gigabit Ethernet, HDMI Out and USB OTG. Similarly, the left side contains 2 full size USB ports and the microSD card slot.

A nice yet basic IR remote is included which is great. It covers off all the key Android functions, some media playback controls and a mouse mode (more on that later).

I unboxed the device and put two AAA batteries into the included IR remote. Plugging the device in saw it boot immediately. Without anything plugged in, the first boot was fast. In just 20 seconds, I was up and running. The Rikomagic MK12 automatically set itself to 1080p and displayed its custom UI.

The remote is nice and comfortable and has all the basic Android functions covered. There is a mouse mode included, but it does not use any form of gyroscope but rather uses the directional buttons. I’d call this functional, rather than convenient, as it takes forever to click on something but its still nice to have. The power button pulls double duty. A single press will put the device into standby and allow you to wake the device. Holding it down for a few seconds opens the shutdown menu to shut the box down properly. One awesome thing that I found is that the button will actually turn the box on! It’s sad that I find this exciting but it’s such a rarity that it needs to be mentioned.

Rikomagic have built a custom UI to help differentiate themselves from the various other boxes. Building upon the popular “Metro” style of UI we’ve seen many manufacturers adopt of late, Rikomagic’s UI is based upon a variety of tiles, each either directing to a group of applications or another menu. 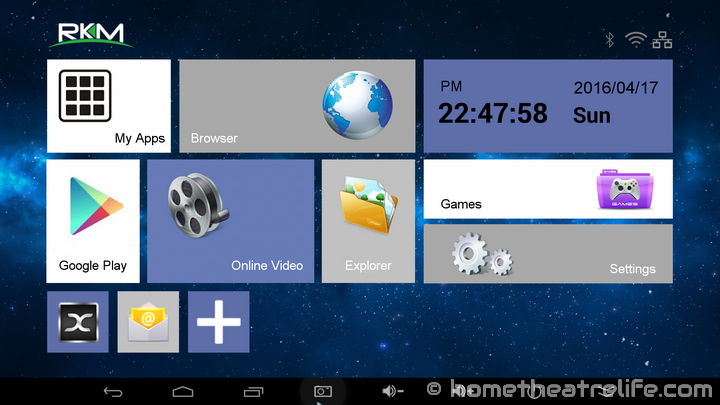 Navigating to the app list provides you another screen full of apps. Swiping between screens moves between 3 different categories: My Apps, Online Video and Games. These are not automatically populated however. You need to manually add apps via the wizard. As a plus, you can do this in bulk, making the process fairly painless. 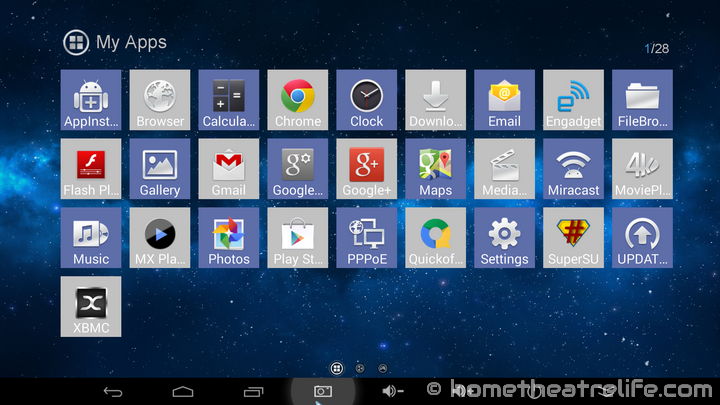 Navigating to the settings portion hands you off to a customised version of the familiar Mediabox launcher we’ve seen on many boxes. I have to admit it would have been nice if there was consistency in the UI but this is a minor criticism.

A number of apps come pre-installed on the Rikomagic MK12 such as XBMC 13.2, MX Player, Adobe Flash and, oddly, Engadget. The Google Play store is also installed.

The device comes pre-rooted which is a nice bonus.

To test media playback, I started with Antutu Video Tester 2.2. This application runs through a number of video files with different codecs and outputs the results. 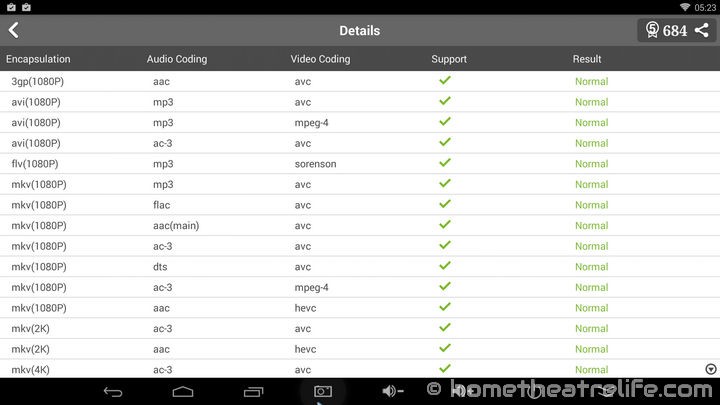 Watching Antutu Video Tester run, some of the HEVC samples had some odd lagging issues so I tested out several video samples in MX Player:

In terms of the above files, I had few issues. The H.265 1080p version of Tears Of Steel and Big Buck Bunny ran fine. With regards to 3D performance, both a 1080p Side-by-Side and Top-Bottom samples played back perfectly.

Whilst the device played most files fine, I did experience some issues. The 1080p VP8 version of Big Buck Bunny did drop frames constantly, but so far this seems to be an issue on Amlogic devices I’ve tested. Both 720p and 1080p hi10p failed entirely, getting only a black screen with audio.

I tried to use Miracast with my Galaxy S4 but it failed every time. The connection appeared to be made, but failed just before the image appeared on the screen. Miracast tends to be fussy on some devices, particularly the Galaxy S4, so you may have better luck with other phone/tablet models.

The octacore GPU of the Amlogic S812 chipset is reasonably powerful and gaming performance was quite good. Angry Birds was smooth and I noticed no lag at all.

I was able to push Beach Buggy Racing to maximum settings and was still able to maintain a playable framerate. Although, it did dip on occasion when there was alot of action on screen.

I connected my Tronsmart Mars G01 gaming controller and was able to play a few races in Beach Buggy Racing without issue.

I was also able to sync my [amazon text=Moga Pro Power&asin=B00FB5RBJM] via Bluetooth and didn’t experience any lag whilst playing Beach Buggy Racing.

I tested the Sixaxis Compatability Checker and the app reported that the MK12 appeared compatible.

To test wireless speeds, I used WiFi Speed Test to transfer a 100 MB file to and from a Samba share. This test was completed 3 times and the average speed was recorded. This yielded an average upload speed of 9.53 Mbps and a download speed of 5.44 Mbps.

Unfortunately, I don’t have a dual-band wireless router so I wasn’t able to test 5GHz performance.

I was able to stream 1080p videos from a Samba share without any buffering.

It’s important to note that wifi speeds are affected by a wide variety of factors such as network equipment and environmental interference so your results may vary.

I was able to connect a USB thumbdrive and play media files off it without any issue.

I ran the usual gauntlet of benchmarks on the Rikomagic MK12

Running Antutu 5.5, I got a score of 23788. One thing to note was that the 3D portion of the benchmark failed and thus, the score is far lower than expected. From CNXSoft’s review of the Minix Neo X8-H Plus, we can see that the Amlogic S812 recieved a 3D score of 9296. Adding this to my Antutu score give an approximate final score of 33084. I have contacted Rikomagic about this issue and will re-run Antutu when they issue a fix. Epic Citadel clocked an average framerate of 49.2 fps at 1080p which is really good. 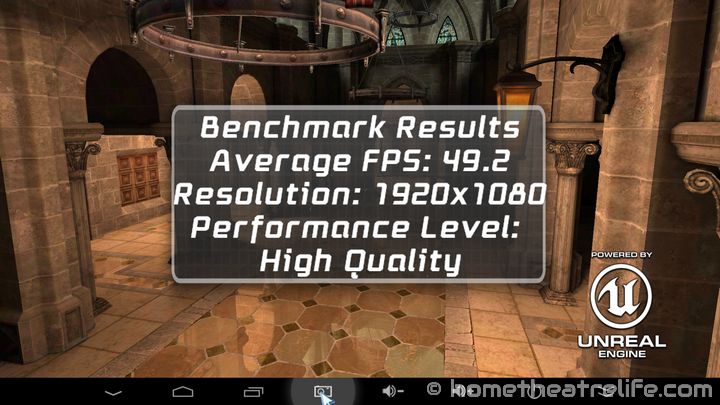 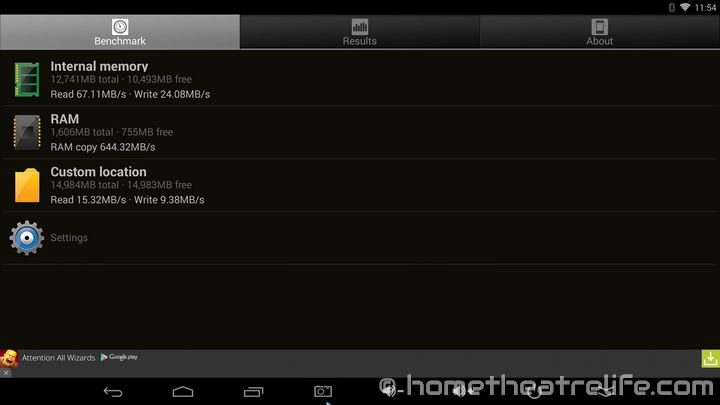 You can purchase one from GearBest, GeekBuying, [amazon text=Amazon&asin=B00REC5Z8Y] or Aliexpress.