The Rippl-TV has an Amlogic S802 chipset and tries to stand out by offering a customized launcher called UtilOS. How well does this unique looking box stand up against the competition?

I want to say thanks to Shenzhen Tomato for sending me a sample of the Rippl-TV to review. You can purchase one from  GearBest, [amazon text=Amazon&asin=B00OMT4BMS], GeekBuying or Rippl-TV. 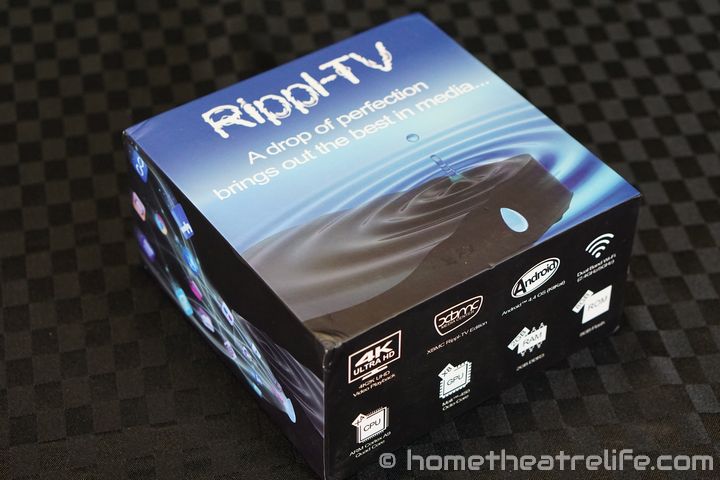 The Rippl-TV comes inside a nice solid box with some branding and the slogan “A drop of perfection brings out the best in media…”. Inside the box, you get:

Unboxing the Rippl TV,  I was struck by the unique design. Clearly the Rippl TV takes is namesake very seriously, with a striking water drop effect on the top of the box. Continuing this theme,  a droplet shaped power light is on the front of the box,  glowing blue when the power is on. I really like the design as it helps it stand out from the dozens of generic square devices many companies produce. The right side of the device has a full sized SD card slot. This is unusual as most of these boxes tend to use microSD cards, but not unwelcomed as I personally tend to have a lot more spare SD cards for some reason. The bulk of the Ports are on the rear of the device. Moving from the left to the right, we have 2 USB 2.0 ports, HDMI, Ethernet, Composite Video out, optical audio and DC power. Below the ports is some additional venting. 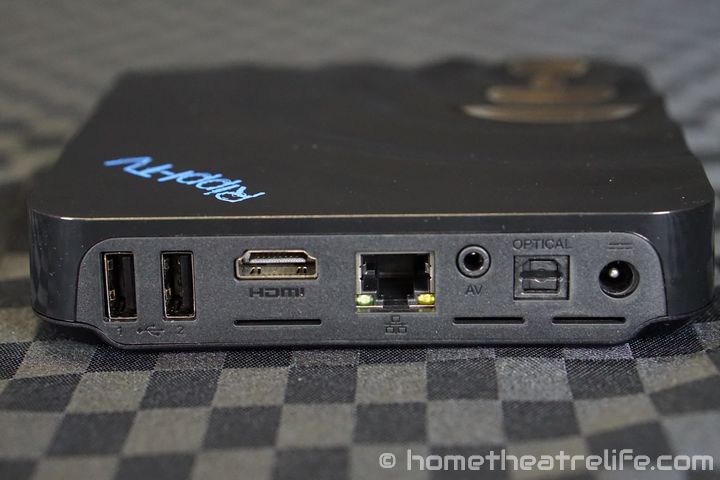 The included remote is nice and compact but rather basic – perfect for navigating the device but not much else.  it has all the key Android buttons such as Home, Menu and Back in addition to a full number pad. A “manual” mouse mode using the directional buttons is also included which is handy but only useful in the rarest of occasions due to the slow speed and inaccuracy associated with operating a mouse in this fashion. 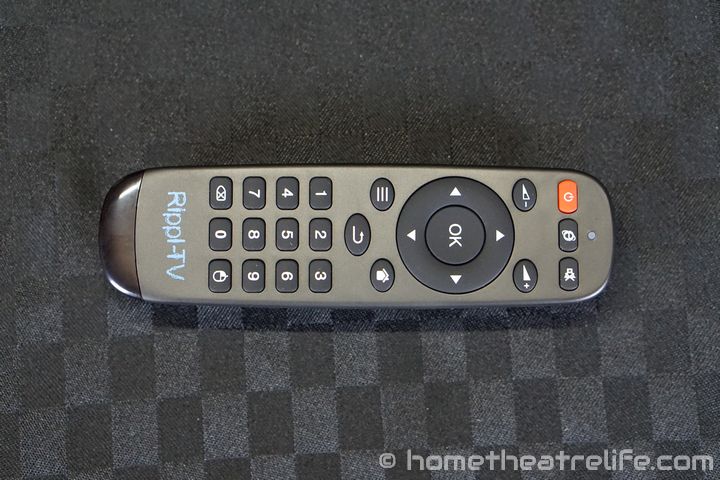 After plugging in the box, it automatically booted.  During the booting sequence, a horror movie-esqe soundbite plays and then the device boots into a set up wizard. The wizard which guides you through the basic set-up process which is a really nice touch and aids in making a user friendly media player. Subsequent boots took about 36 seconds to reach a usable state.

After completing the setup wizard, you need to select a launcher. Two launchers are included – the Mediabox launcher,  as seen on the MK808B Plus or UtilOS.

I’ve covered the media box launcher in my MK808B Plus Review so I’m not going to go into any great detail. Suffice to say, it is a nice launcher that is much better suited for TV use than the stock Android one.

UtilOS however,  is unique to the Rippl-TV. Heavily based on XBMC/Kodi, it is essentially Kodi with core specific menus such as the app drawer integrated. Whether or not you are familiar with Kodi, it’s super easy to navigate and very intuitive. UtilOS has a whole bunch of Kodi repositories pre-installed, giving you access to a large number of streaming services and other features out of the box. By preinstalling these, it removes one of the more complex parts of the Kodi experience for those who are less tech savvy. 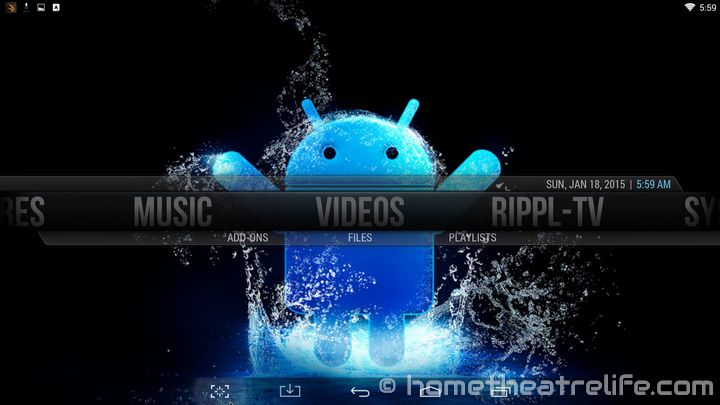 That’s not to say everything is great however. Both the setup wizard and settings screens both fall back to the Mediabox UI. Whilst not a major issue, transitioning from Kodi-styled menus using a dark color scheme to the rainbow buttons and different navigation approach of Mediabox is jarring. A bit more polish here would be appreciated.

A great inclusion is the Gamesome Frontend, which acts as an emulator launcher and helps organise all your ROMs for you. Another great addition for those who favor simplicity over customisation.

Navigating through UtilOS was a really nice experience. Having used Kodi for a number of years, everything was familiar. I didn’t notice any lagging at all whilst navigating the menus. 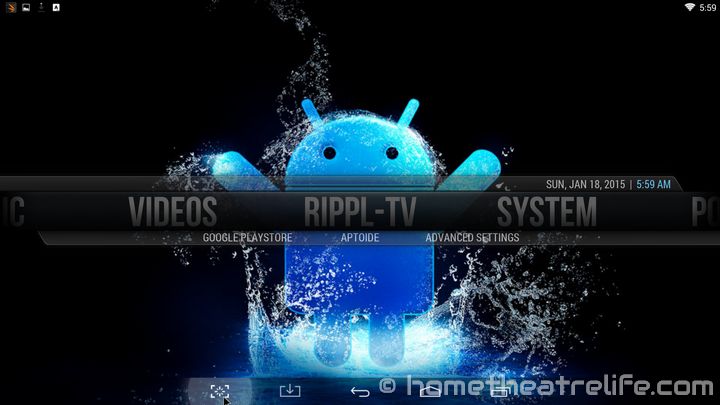 The included IR remote is sufficient for getting around UtilOS and for the average user, it will probably be good enough. All the media buttons worked as expected in both the included 4K Media Player and UtilOS. The mouse function was basic and slow. I was still able to use it to take screenshots and such but, being controlled by the directional controls, it’s a bit painful. Do yourself a favor and invest in a good air mouse such as the Mele F10 Deluxe or Rikomagic MK705.

The box supports standby via the power button on the remote. Pressing it again will bring the box back to life almost instantly.

I can also confirm that the box comes pre-rooted, which is nice. To test media playback, I started with Antutu Video Tester 2.2. This application runs through a number of video files with different codecs and outputs the results. The final test score was 656. As expected, the device couldn’t handle HEVC files as the chipset doesn’t support them in hardware. WMV2 also resulted in no video at all.

A number of test videos were run through both UtilOS and the included 4K Movie Player to test video playback in a more realistic use scenario.

I wasn’t able to get Miracast working at all with my Galaxy S4. Both the phone and the Rippl-TV said they were connecting but it eventually timed out. Miracast tends to be fussy on some devices, particularly the Galaxy S4, so you may have better luck with other phone/tablet models.

I tested DLNA via the included Rippl-TV Media Center app. I didn’t have any issues streaming media from my server.

I was able to connect a USB thumbdrive and play media files off them without any issue.

Gaming on the Rippl-TV was pretty good, with the Amlogic S802’s octacore GPU performing nicely. Angry Birds ran perfectly and I noticed no dips in the framerate. Setting Beach Buggy Racing to the maximum settings, the game ran well. The only real time I noticed the framerate suffer was during the water splash effect or when there were lots of explosions on screen. 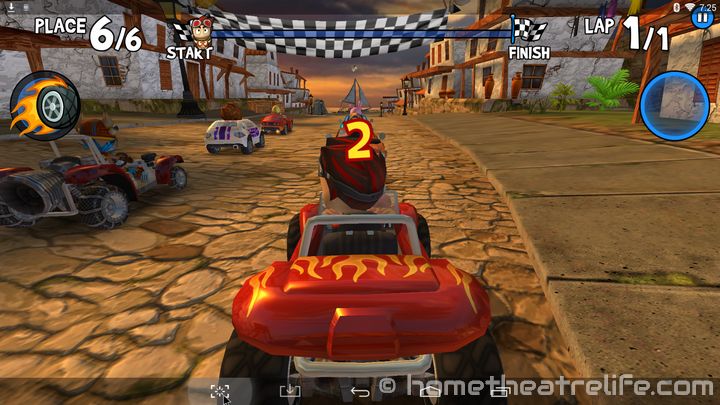 I connected up my iPega 9025 via Bluetooth and played a few races in Beach Buggy Racing. Controls were responsive and there was no perceivable lag.

A 100Mb file is transferred between the device and a PC running the benchmarking server application. This is repeated 3 times for each direction and the average is taken. The results are presented below. Download and Upload speeds were 17.18 Mbps and 18.34 Mbps respectively.

Testing video playback from a Samba share, I was able to stream a 1080p video without any issue.

A 100Mb file is transferred between the device and a PC running the benchmarking server application. This is repeated 3 times for each direction and the average is taken. Download and Upload speeds were 95.15 Mbps and 81.59 Mbps respectively.

Antutu returned a score of 31109, which is roughly what other devices in the same family receive. 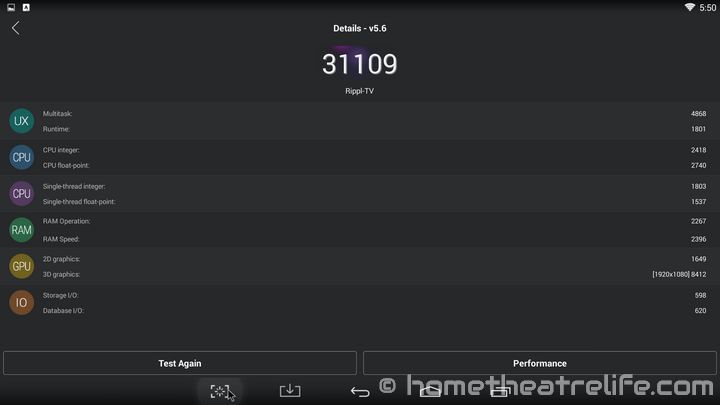 I benchmarked the Internal Storage and RAM using A1 SD Bench. The internal memory attained a Read of 24.91 MB/s and a Write speed of 8.22 MB/s. Whilst the read speed is fine, the write speed is a little bit slower than other devices I have rested. RAM copy speed was 1058.22 MB/s. I haven’t been able to find custom ROMs for the Rippl-TV at this stage.

HDMI CEC worked without issue on my Samsung TV.

You can purchase one from  GearBest, [amazon text=Amazon&asin=B00OMT4BMS], GeekBuying or Rippl-TV.

Rippl-TV
The Rippl-TV is a good box for those who are not tech-savvy. With UtilOS, preinstalled streaming add-ons/apps, and a simple remote, those who have basic needs for a media player will be well looked after. For power users however, i'd look elsewhere as the lack of H.265 support and price premium over other cheaper and more powerful boxes cannot be justified for these individuals.
Pros
Cons
7.8