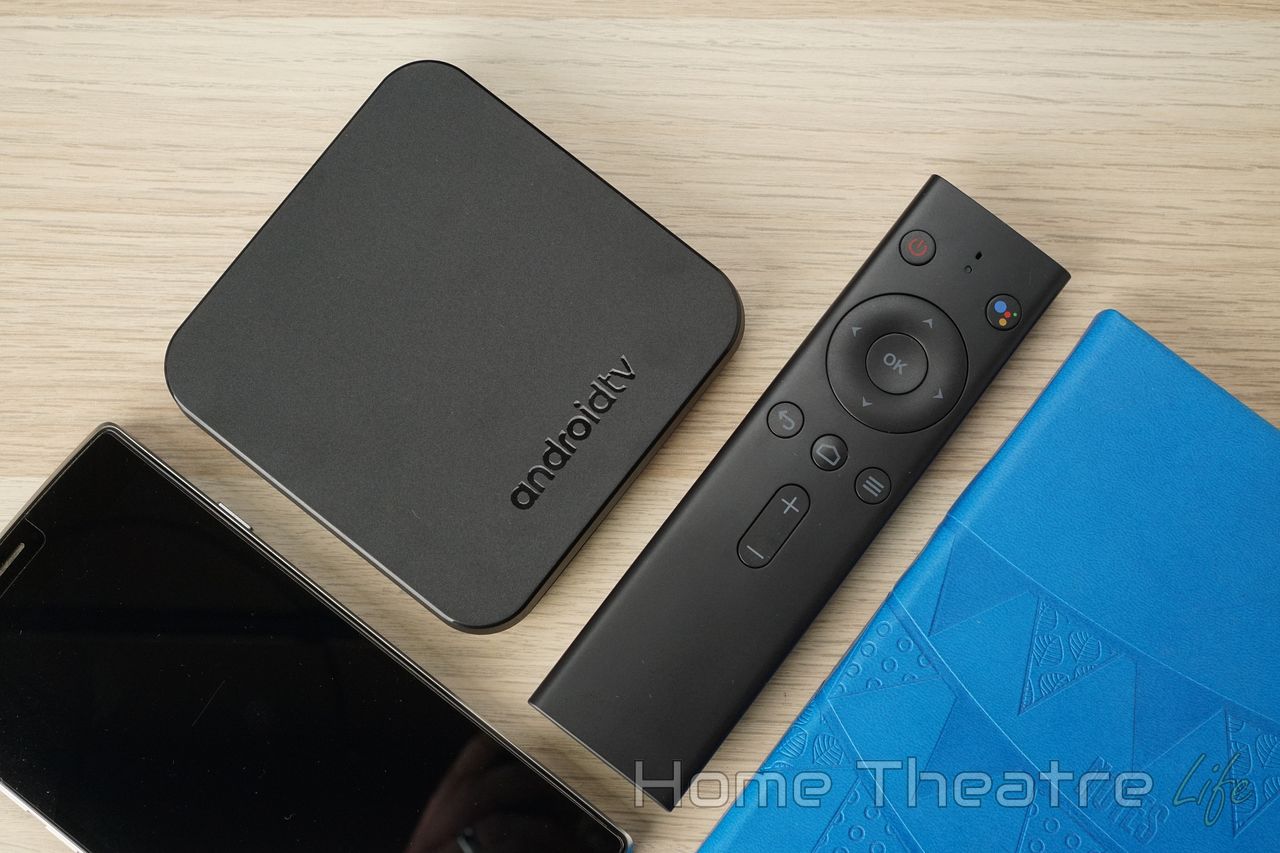 Following up the success of the Mecool KM8, Mecool have followed up with the the Mecool KM9. Sporting an updated quad-core Amlogic S905X2 processor, more storage and RAM – all for under $60, is the Mecool KM9 worth it?

You’re also getting double the RAM and storage compared to its predecessor, the Mecool KM8, upgraded to 4GB of RAM and 32GB of storage (which can be expanded by up to 32GB by adding a micro SD card).

The Mecool KM9 is a compact Android TV box using a matte plastic shell with Android TV branding on the top.

On the right side, you’ve got a micro SD card slot, a USB 2.0 port and a USB 3.0 port for faster data transfer speeds. Around the back, there’s the power input, HDMI output, Ethernet and composite video output (with an adaptor).

The front of the unit also had a “breathing light” – an animated RGB light that glows and changes colours in response to various statuses like when you’re accessing the Google Assistant.

The included Bluetooth voice remote is the same one we’ve seen included with a number of other Android TV boxes. As it’s Bluetooth, line of sight isn’t needed which is a massive plus for usability.

In terms of functionality, you’ve got all the key functions you’ll need including Android buttons (home, back and menu), volume and navigation buttons. There’s also a dedicated button for accessing the Google Assistant, so you can use the remote’s built-in microphone to ask questions, access your smart home devices and more.

I’m pleased to say that this Google Assistant experience on the KM9 is much better that what I experienced on the Mecool KM8. The Google Assistant bar appears almost instantly, you don’t need to wait before speaking and recognition improved dramatically – making it something genuinely useful rather than a pointless feature.

The Mecool KM9 ships with Android TV 8.1 based on Android Oreo, which is the latest version of Android TV currently available.you’re getting a TV friendly launcher that splits things into “channels” dedicated to apps, YouTube, and more.

It’s also clear that this isn’t Google-certified like the Mecool KM8 appeared to be as the Chromecast Built-In feature isn’t available.

The firmware itself seems to run well – particulary with the resolution set at 1080p. Upping the resolution to 4K sees everything get sharper but the UI lags a bit so if you’ve got a 4K TV, your experience may vary.

Software updates are supported via a dedicated OTA app but there weren’t any available at the time of writing. However, Mecool have released firmware updates for their other devices so there is some degree of support.

Media playback on the Mecool KM9 was pretty good. Most of my test files played without any issues.

Automatic framerate switching isn’t supported which is disappointing for those sensitive to motion judder.

The Netflix situation on the Mecool KM9 is a mess, similar to the problems seen with the Mecool KM8. The box itself supports Google Widevine L1 DRM so it should be capable of handling HD Netflix, through it’s not recognised as a compatible device – you can’t install the Netflix app at all via the Google Play store.

Sideloading the Netflix APK works, however, you’ll only be able to stream video at 480p which is problematic if you’re a regular Netflix user. That said, some users at Freaktab have reported being able to stream at 1080p when using a modified APK.

Despite running Android TV, the Mecool KM9 isn’t Google-certified and as such, doesn’t support Chromecast built-in.

Compared to Amlogic S905 Android TV boxes, the Mecool KM9 offers much better gaming performance. Both 2D and 3D titles played well, with Beach Buggy Racing remaining smooth even when maxed out at 1080p. However, more demanding games may be problematic.

Should You Buy The Mecool KM9?

On paper, the Meool KM9 is certainly attractive. For under $60, you’re getting an Android TV device that offers an impressive 4GB of RAM, 32GB fo storage, good connectivity and more. However, it’s when you peek beneath the sheen that the cracks start to appear.

As a basic media player, there’s nothing wrong with the Mecool KM9 – it handles most codecs well, with smooth video playback. Casual users will likely be very happy with what the KM9 offers for its budget price tag.

However, with poor Netflix support, no automatic framerate switching and more make it one ot avoid for home theatre enthusiasts.

Where to Buy the Mecool KM9

The Mecool KM8 is available from GearBest for under $60 with free shipping.

MECOOL KM9
The Mecool KM9 offers impressive hardware for only $60. Casual users will be impressed by the media playback capabilities though poor Netflix support and no automatic framerate switching are problematic for home theatre enthusiasts.
6.8

What is an Android TV Box? (And Why You Need One)

2 thoughts on “Mecool KM9 Review: Is This Android TV Box Worth It?”