The VOYO Mini PC is a portable Windows PC powered by Intel’s quad core Baytrail processor. With 2GB of RAM, 64GB eMMC storage and selling for just $130, how does this budget Windows PC stack up?

Thanks to GeekBuying for providing me a sample to review. GeekBuying stock the VOYO Mini PC in blue and white. 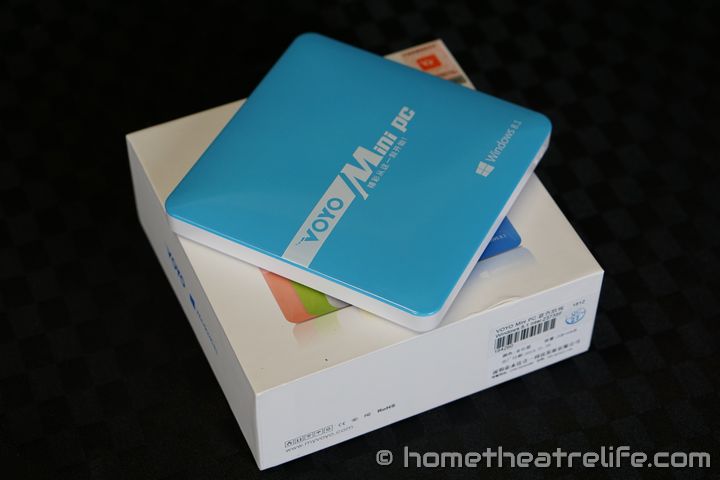 The VOYO Mini PC comes with the bare basics included inside the box: 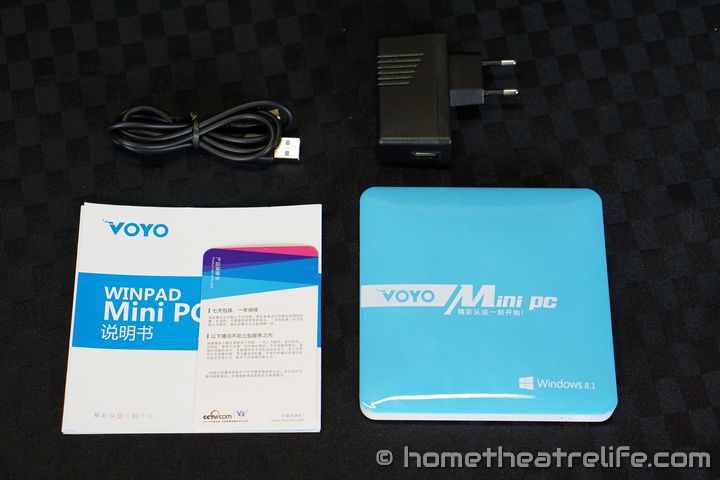 VOYO haven’t included a HDMI cable which is a little frustrating and something that MINIX included in the Z64. More frustrating though, is that the VOYO Mini PC uses a mini HDMI port instead of standard HDMI so you’ll need to buy an adapter like this one in order to connect it up to your TV or monitor. 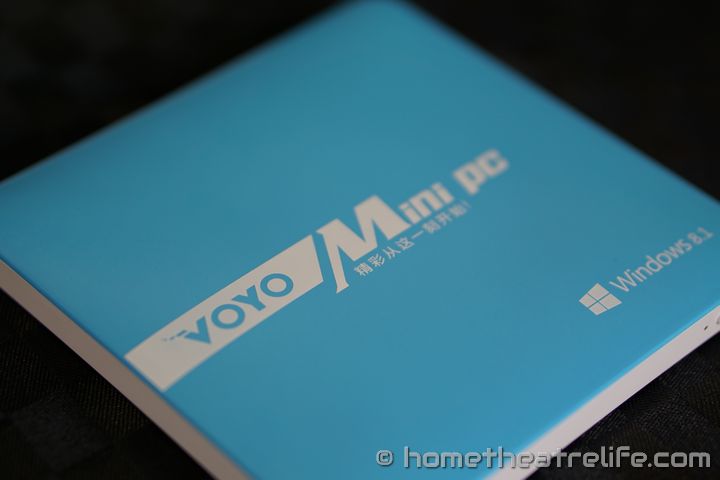 In a world of grey and black boxes, it’s great to see a company inject some color. The VOYO Mini PC is available in a range of colors, and I was provided the blue one. It definitely makes the device look unique and stand out, whether it be on your desk or next to your TV.

VOYO have also managed to cram a whole PC to an impressively small case. The device is suprisingly thin, coming in at a respectably svelte 12mm. 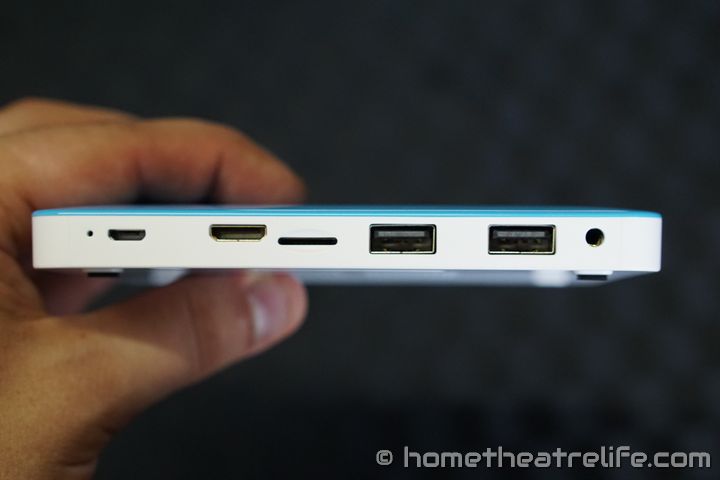 The back of the device houses the majority of the devices ports, featuring microUSB OTG, mini HDMI, microSD card slot, 2 USB 2.0 ports and DC In. On the right side of the device is also an additional USB 2.0 port. As everyone knows, the more USB ports, the better. 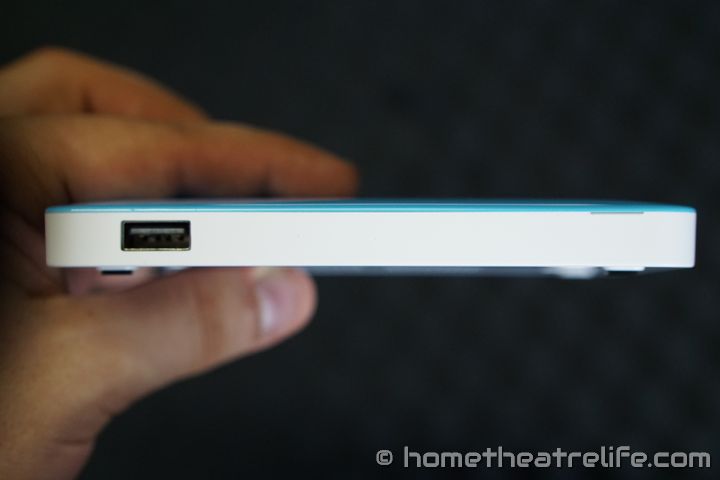 The lack of Ethernet is a bit disappointing but depending on how you’re planning on using the device, it may be a non-issue. Those needing Ethernet can look into buying a USB to Ethernet dongle to bridge the feature gap.

To turn the device on, you need to plug it in and hold down the power button for about a second. It boots fairly fast, becoming usable in 16.7 seconds. After the first boot, 48.5GB/53.3GB was free on the internal storage. It’s great to see that VOYO have opted for 64GB, compared to the 32Gb many competing devices such as the PiPO X7 offer, as that 32Gb seems to quickly disappear after a few apps and updates are installed.

I can also confirm that Windows 8.1 with Bing is activated.

There’s really not much to say here except that it’s the Windows 8.1 you know and love (or possibly hate). The VOYO Mini PC handles Windows 8.1 well, similar to the PiPO X7, with smooth animations and applications launching quickly. You can see a brief demo of Windows 8.1 on the VOYO in the above Unboxing video. 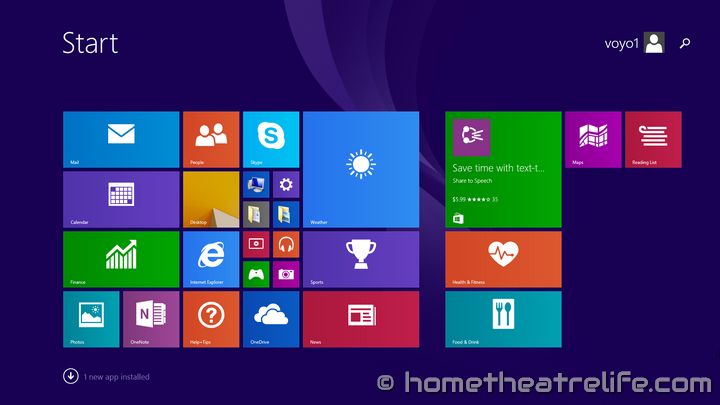 Gaming performance was mixed on the VOYO. 2D games were fine and Jetpack Joyride played well. However, take a step into 3D causes issues. Although performance is ok for the first few minutes, it quickly degrades into a fluctuating framerate thanks to thermal throttling.

I connected my iPega 9025 controller over Bluetooth without any issue.

Wifi performance was pretty respectable, with upload and download speeds of 23.5 Mbps and 26.1 Mbps respectively. I had no issues streaming a 1080p video from an NFS share. I didn’t have any issues with wifi dropouts either. 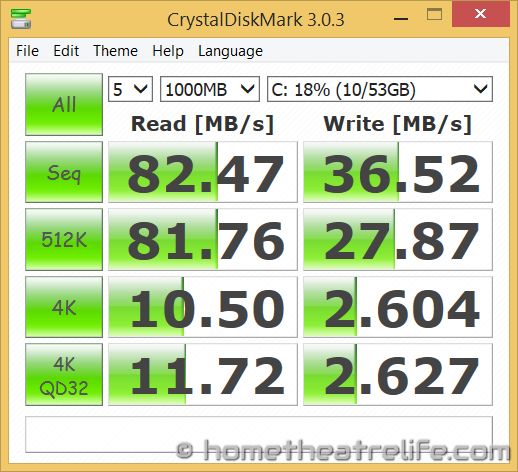 I was initially hopeful with the VOYO Mini PC’s temperatures. As mentioned in the Impressions article, I used Prime95 to load the device and after 10 minutes the case temperatures were 36.7°C and 44.1°C on the top and bottom of the device respectively. The ambient temperature was 22.8°C.

Unfortunately, the VOYO Mini PC has cooling issues. When running Asphalt 8, performance was good for the first minute before the framerate started alternating between high and low FPS. Suspecting throttling, I fired up HWMonitor and Prime95 to test my suspiciouns. Sure enough, after running Prime95 for a few minutes, the CPU temps rapidly climbed to 80-85°C and the CPU throttled down to 500MHz. This issue appeared during several tests, with 3D gaming and playback of both 4K H.264 and 1080p60 taking a noticeable hit.

Power consumption was good for the VOYO during operation:

The VOYO Mini PC is unique in that it also has a 1000mAh battery on-board should be good for about 3 hours of usage.

I received my VOYO Mini PC from GeekBuying. If you’re interested in getting one for yourself, you can purchase one from them in blue and white.

Alternatively, you can purchase the VOYO Mini PC from GearBest (blue and white).

Have you bought a VOYO Mini PC? What do you use yours for?

VOYO Mini PC
The VOYO Mini PC is an interesting device. Being so compact, it makes a decent portable HTPC or good general purpose PC. Unfortunately, it's let down by poor cooling causing throttling at high loads so those looking for gaming or playing high-end video codecs should look at alternatives like the MINIX NEO Z64.
Pros
Cons
6.2