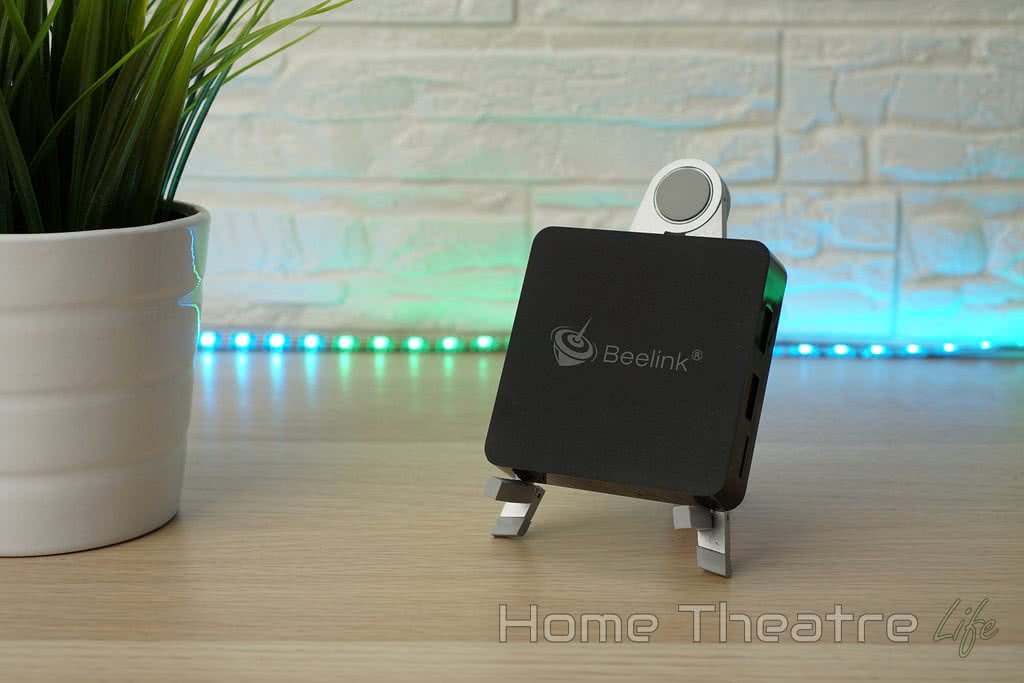 The Beelink GT1 Mini comes in a few configurations, allowing you to get the right specs for your budget. There’s 3 different configurations available:

The quadcore Amlogic S905X2 processor that powers the unit is impressively capable, offering plenty of power for watching movies in Kodi, gaming and browsing the web.

There’s also plenty of RAM and storage available too. Whilst most users will find 2GB of RAM to be enough for most uses, springing for the 4GB model will offer more flexibility. If you’ve got a large Kodi library, the extra RAM will help considerably.

Users can also use the micro SD card slot to increase the storage availble on the unit by an additional 32GB which is great.

Networking-wise, the Beelink GT1 Mini seems to tick all the boxes too. With gigabit ethernet and dual band wireless AC, there should be plenty of bandwidth available for streaming videos and games across the network – regardless of which method you prefer.

When you unbox the Beelink GT1 Mini, it’s surprising just how “mini” Beelink’s latest device is.

Coming in at a tiny 77x77x17mm, the GT1 Mini is so small that you don’t notice it sitting next to your TV. However, despite its small size, there’s a nice weight to the unit so it doesn’t move even when all the HDMI cables are connected.

The case is made of a nice Matt plastic which hides fingerprints well. Ports are located on the right and back of the unit. The right side has a micro SD card slot (for expanding the device’s storage), a USB 3.0 (for faster data transfer from devices such as USB hard drives) and a USB 2.0 port.

Hopping around to the back, you’ll find a composite video adapter (which requires a separate adapter), ethernet, HDMI and DC in for powering the device.

There’s a small led power indicator on the front of the unit too. It’s subtle enough that you don’t notice it all – much better than the bright power LEDs I’ve seen on some boxes.

The included 2.4Ghz voice remote is decent. There’s all the main functions you’d need such as home and menu buttons.

The dedicated voice button brings up the Google Assistant so you can ask questions, access your home automation devices and more. Voice recognition was accurate – though it’s a little awkward that you need to hold the microphone button down to speak.

You’ll also need to have the remote’s USB dongle connected at all times which takes up one of the two precious USB ports which is a shame. Having an internal receiver would have been a much better solution.

That said, I’d recommend you get an air mouse for the best possible experience.

The Beelink Mini ships with a relatively stock version of Android 8.1 with a TV-optimized launcher designed to be used with a remote.

It’s the same launcher we’ve been seeing on Android TV boxes for years and its looking quite dated by this point. I’d really love to see Beelink develop a more modern UI like we’ve seen in devices from Zidoo and Ugoos.

There’s a large time/weather widget at the top right of the screen (that I wasn’t able to get working – even after several firmware updates). There’s hardcoded shortcuts for the media player, web browser and Google Play Store available but these disappointingly can’t be changed. However, there’s a separate panel on the right side that lets you add shortcuts to your favorite apps.

Scrolling to the left or the right reveals two separate category pages for video apps and games so you can keep all your favorite apps together. However, you’ll need to categorize everything manually which can be a bit time-consuming.

Beelink have already released several firmware updates already so it’s good to see the company supporting their Android TV box (at least in the early stages).

Beelink also publishes their firmware updates over at their official forums.

Media playback on the Beelink GT1 Mini was solid, handing most test files without problems.

As the Beelink GT1 Mini doesn’t support Google Widevine L1 DRM, Netflix is capped at 480p (DVD quality) which is problematic for most Netflix users.

To get Netflix on the Beelink GT1 Mini, you’ll need to install Netflix from the Google Play store to get it up and running.

Like other Amlogic S905X2 boxes, the Beelink GT1 offers solid gaming performance across both 2D and 3D titles.

Thanks to its combination of excellent wireless hardware and strong CPU makes the Beelink GT1 Mini a perfect candidate for Steam In-Home Streaming.

Even with the “Beautiful” preset which requires 30mb/s of bandwidth, the Beelink GT1 Mini handled gaming well over its wireless AC connection. Swapping out for a wired connection further improved performance.

Should You Buy The Beelink GT1 Mini?

I really enjoyed my time with the Beelink GT1. It’s definitely got some minor issues such as the weather widget not working and an old-fashioned launcher but I was impressed with its networking and media playback performance.

Home Theatre enthusiasts will be disappointed with the lack of HD Netflix support and no automatic framerate switching but most users will find plenty to love.

Where to Buy the Beelink GT1 Mini

The Beelink GT1 Mini is available from Amazon and GearBest.

Beelink GT1 Mini
The Beelink GT1 Mini offers impressive hardware and performance at a budget price. Most users will enjoy using the GT1 Mini, despite its quirks.
7.8

Best Bluetooth Speakers for the Beach 2019

How to Enable Unknown Sources in Kodi 18