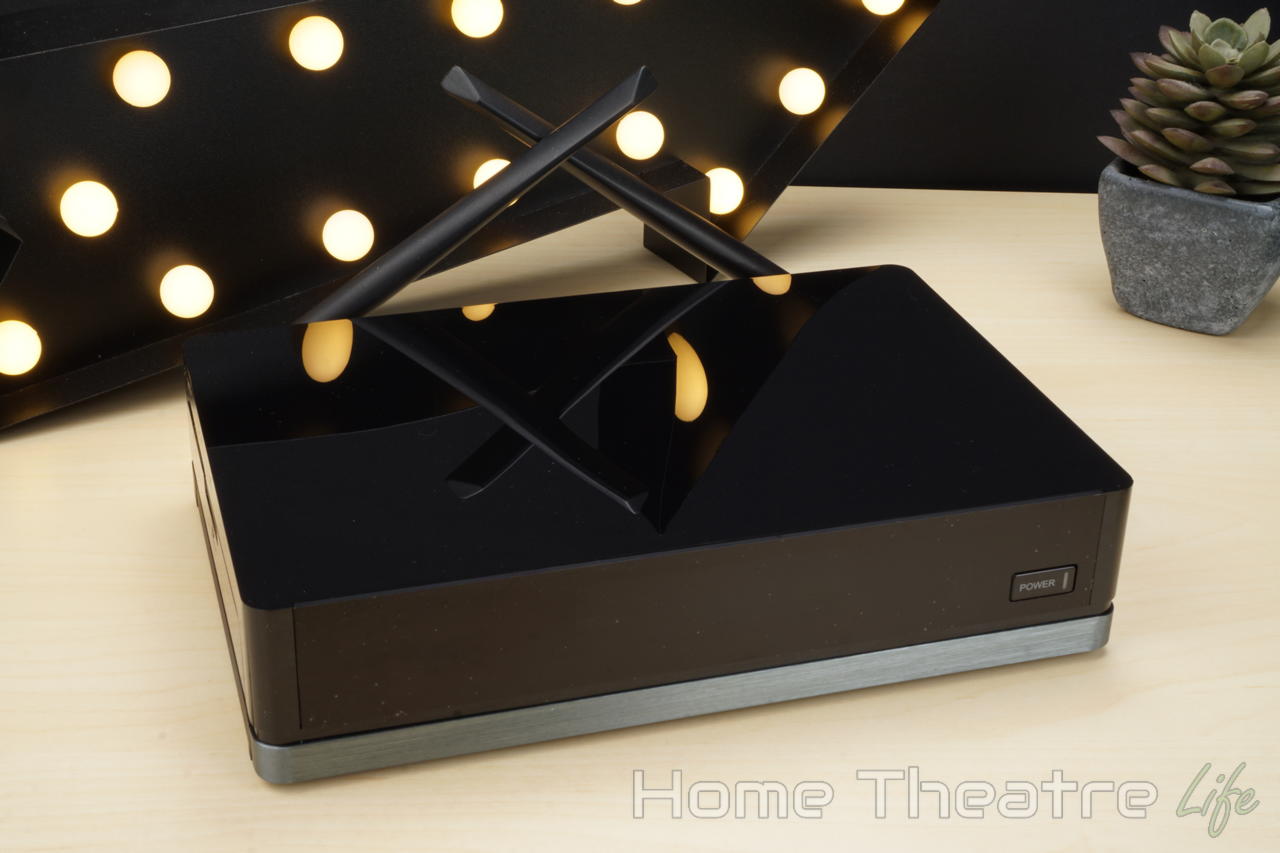 What is the MeLE V9?

Powered by the quadcore Realtek RTD1295, the MeLE V9 runs Android 6.0 Marshmallow and lets you use Android apps on your TV (including installing Kodi), stream movies and more.

Its HDMI input allows you to record from connected devices such as game consoles and more whilst the internal hard drive bay lets you significantly increase the amount of onboard storage.

The MeLE V9 is available from the official MeLE AliExpress store and Banggood for around $200. However, it’s on sale for $140 at AliExpress for a limited time only.

I just want to call out how much I love that MeLE actually includes all the plug adapters in the box. This makes it so easy to get up and running, as most Android TV boxes don’t have Australian plugs.

The MeLE V9 is a massive Android TV box. Coming in at a sizeable 255×165×55mm, it’s significantly bigger than other Android boxes.

That space is needed to house a 3.5″ hard drive bay. Removing the panel on the side allows you to slide in a standard desktop hard drive to increase storage by up to an impressive 3TB. That gloss finish looks amazing, though it’s a fingerprint magnet. Unless you put it somewhere it’ll never be touched, expect to be cleaning it regularly.

The front of the unit has a large LED display that shows you the current time, and status indicators for things such as wifi.

The right side of the unit has an SD card slot and 3 USB 2.0 ports, whilst the 3.5″ HDD bay can be accessed by removing the cover on the left side.

There’s a lot of ports on the back of the unit – and I mean a lot! Here, we’ve got a reset button, composite video output, optical audio output, HDMI in, Ethernet, HDMI out, a USB Type-C port and power. There’s also exhaust ports for cooling.

Unfortunately, MeLE haven’t added any easy access USB ports on the front of the unit (like most Android TV box manufacturers). It’s frustrating as I’d love to be able to quickly plug in a USB drive of movies and kick back.

The MeLE V9 has a power button on the front, though the unit automatically powered on when plugged in. A cold boot takes around 19 seconds which is pretty reasonable and on par with other RTD1295 Android TV boxes like the Beelink SEA I (review).

The included IR remote is one of the better included remotes I’ve used. It’s fairly comprehensive, with the standard Android buttons, a full number pad, a mouse mode and more. 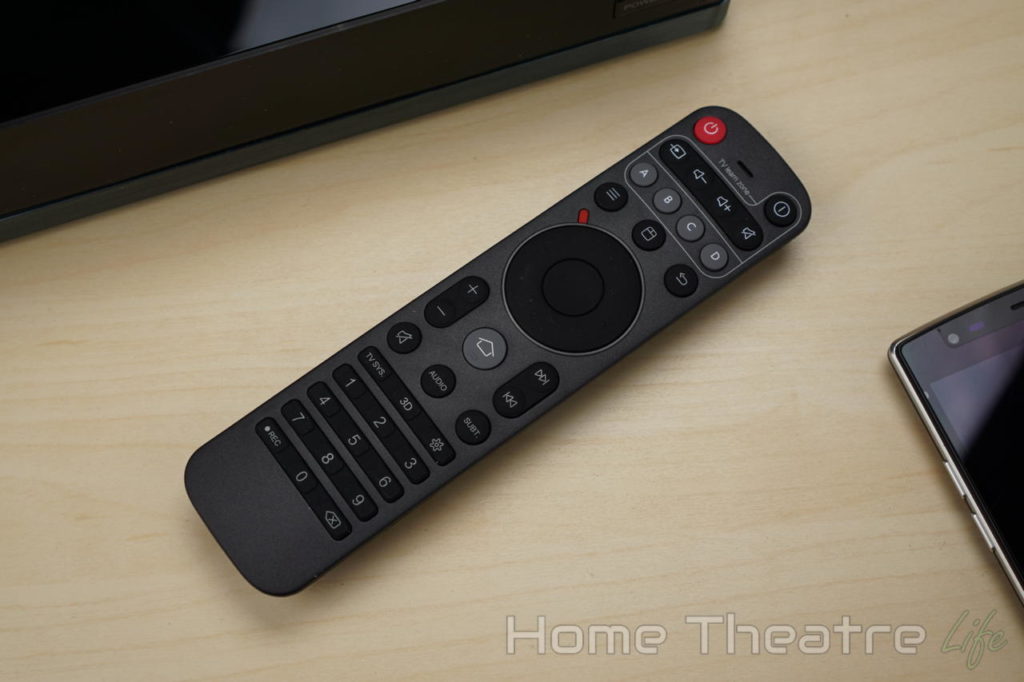 There’s also a learning mode so you can learn your TV remotes commands (amongst others) and control them using the one remote.

MeLE have actually added more buttons than competing devices, with ABCD keys offering another 4 buttons that can be mapped in addition to power, source and volume controls. It’s a welcome addition.

That said, for the best Android TV box experience, I’d recommend picking up an air mouse [amazon text=like this one&asin=B01N0SUUZS] which lets you control your TV box using gestures. For more information on air mice and my recommendations, read my Best Air Mouse guide). 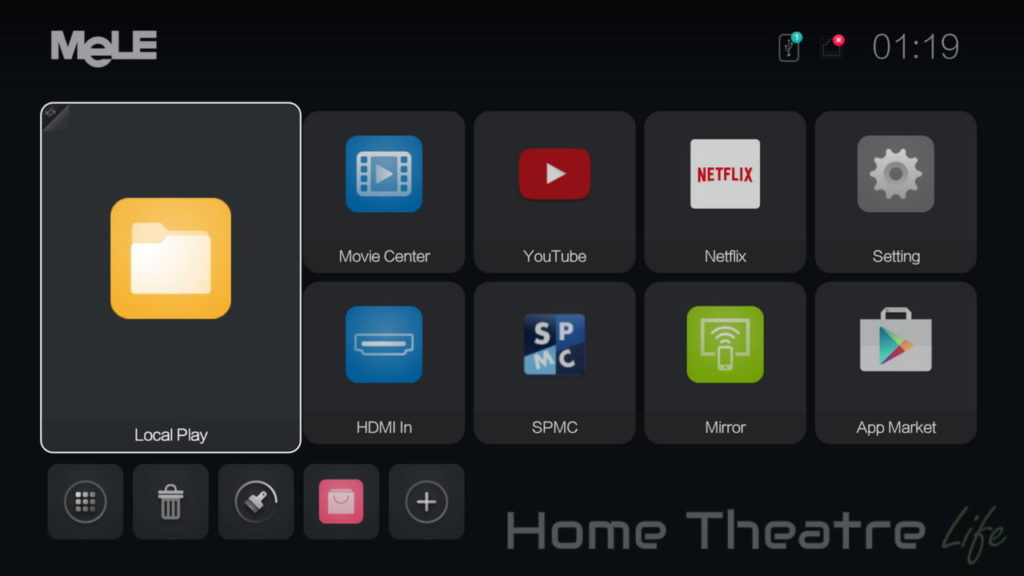 All the shortcuts on the home page are customisable (after applying the first firmware update – see below). You’ve also got a row of shortcuts for you to add your favourite apps.

There’s a few apps installed including Media Center, Netflix and SPMC. You can also use the Google Play store to install other apps like Kodi. 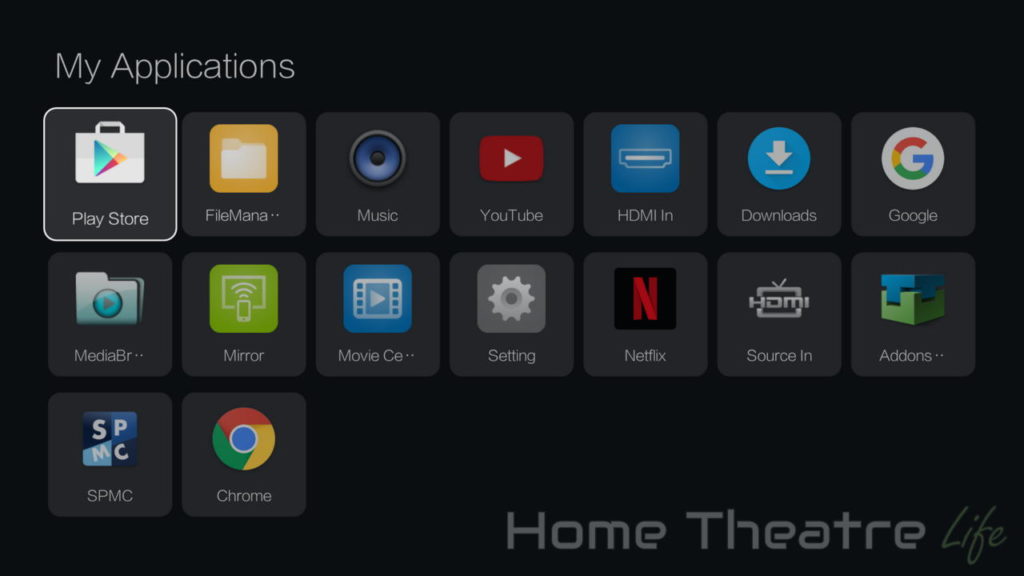 Movie Centre is probably the most unique. It’s a media player app that scans your hard drive for movies and pulls in info such as covers, actor info and more.

The box isn’t rooted, though this won’t be an issue for most users.

I really like the fact that MeLE have provided a simplified settings menu. It’s fully skinned and makes it far more user friendly, as most users won’t need to dive into Android’s detailed settings. That said, basic things such as Bluetooth are hidden in the Advanced settings which is a pain. 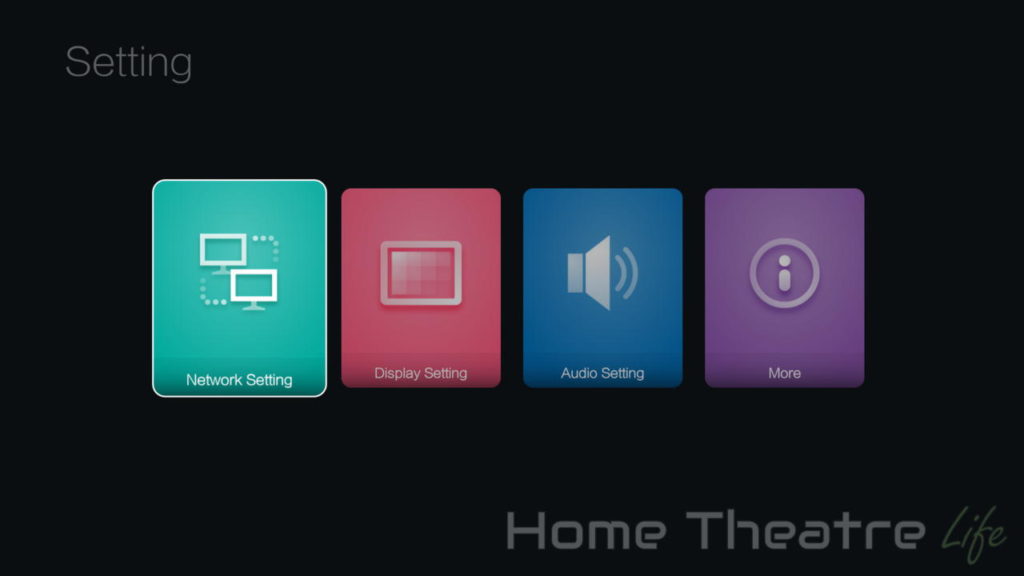 OTA updates are supported though the first update needed to be applied manually, installing the update via USB. That said, it was far simpler than having to manually update the Beelink SEA I (review). Hopefully future updates can be updated via OTA. 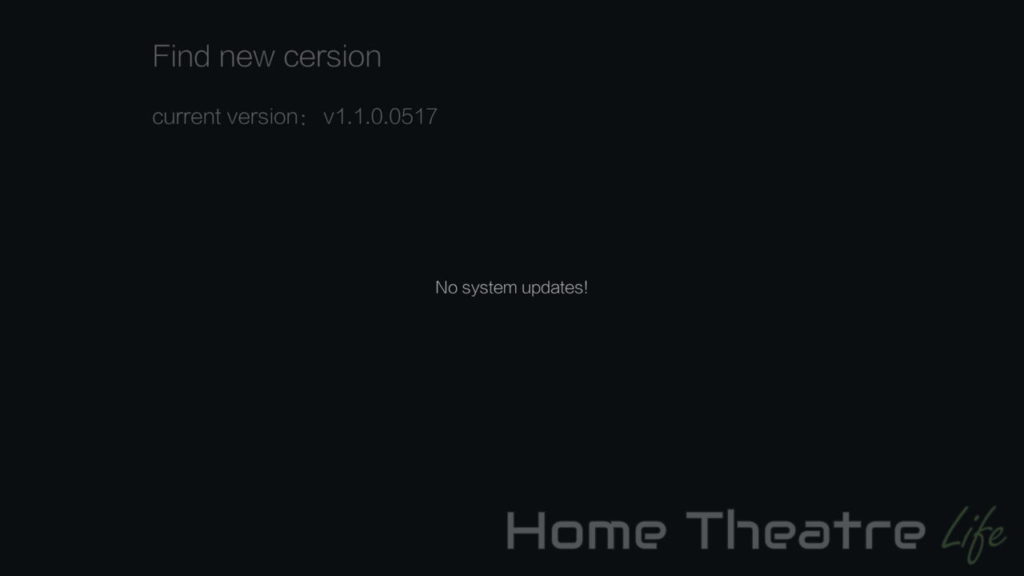 MeLE have already released a firmware update for the V9 that adds a number of features and bug fixes. However, I was disappointed to see that it couldn’t be applied as an OTA update. 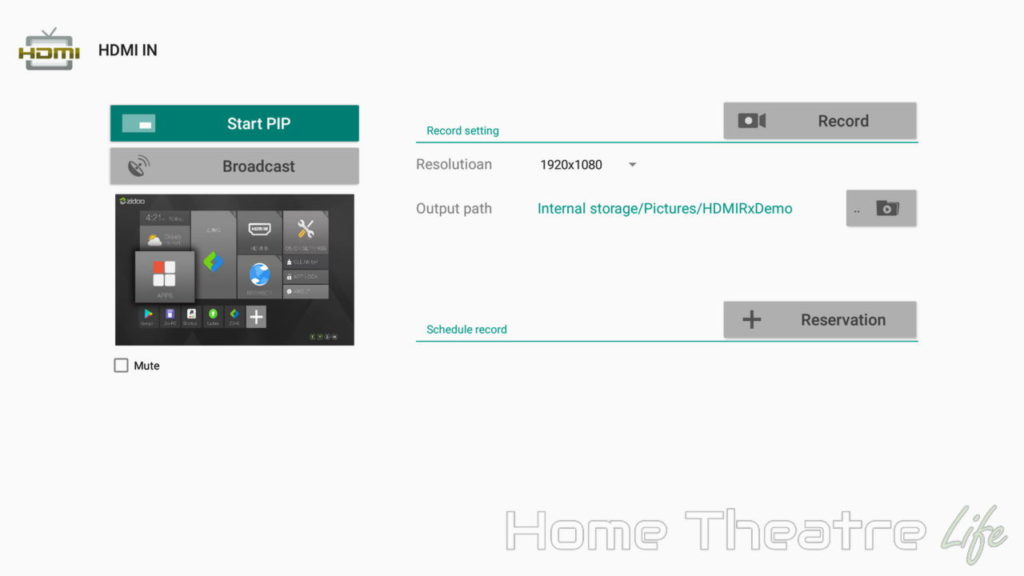 The MeLE V9’s ability to record from HDMI devices is one of the unit’s big selling points.

Recordings are captured at [email protected], though DRM-protected content cannot be recorded (as you’d expect).

There’s a Picture-In-Picture mode available that lets you use the MeLE V9 and your connected device at the same time. For example, you can watch the game and play games simultaneously. 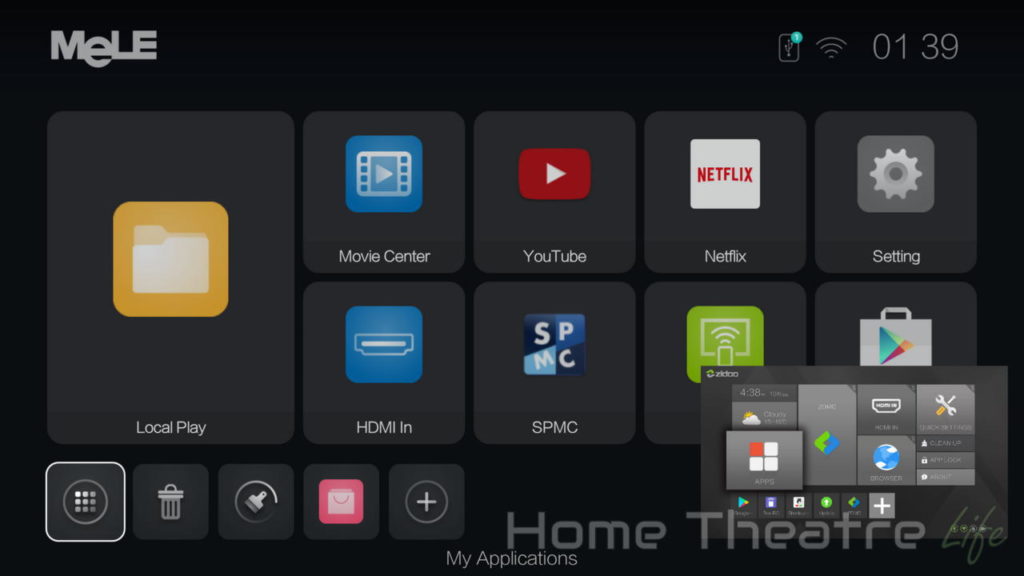 You can also set up recording schedules to record at set days and times. However, with no way of changing the channel of connected devices, you need to make sure everything is set up on the device you want to record too. It’s a good feature in theory, though it has its limitations.

After updating MeLE V9’s firmware, the previously installed Kodi 16.1 was replaced with SPMC. However, I decided to test Kodi 17.3 as this is what people will be using.

After setting up Kodi as normal, videos were played from a USB 3.0 hard drive and streamed over wifi from my server’s NFS share.

Overall, the MeLE V9’s video playback was good, covering everything from the most common video formats to 4K H.265 videos. However, 4K H.264 videos didn’t play properly as the chipset doesn’t support them and some of the more demanding codecs tripped the box up.

the MeLE V9’s video playback was good, covering everything from the most common video formats to 4K H.265 videos

Automatic framerate switching helps eliminate judder. Thankfully, it works in after being enabled in Android settings, though only in the external video app or after configuring Kodi to use an external player.

Though it only works for 24Hz videos, this is the most common framerate for movies so it’s a massive plus. The fact that it’s supported in some form places it leagues ahead of most Android TV boxes.

I used the pre-installed version of the Netflix app, as the box isn’t compatible with the latest version due to changes by Netflix. 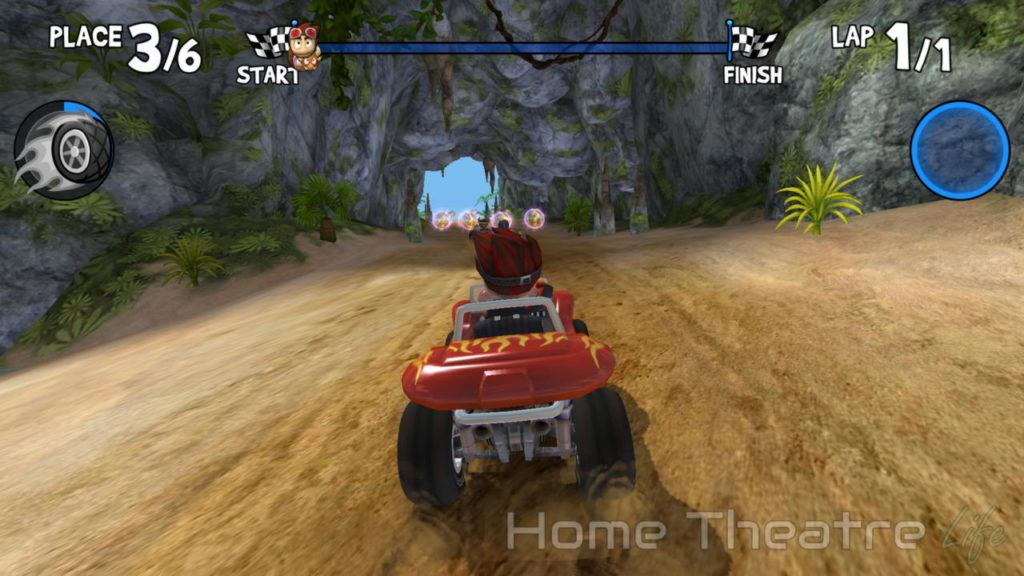 Everyone loves gaming so to put the MeLE V9 to the test, I hooked up the awesome [amazon text=GameSir G4S controller&asin=B01HNXGKT6] (read my review) over Bluetooth and installed Jetpack Joyride (Android) and Beach Buggy Racing (Android).

I was quite impressed with the gaming performance of the MeLE V9. It’s not as good as the [amazon text=powerful yet pricey Nvidia Shield TV&asin=B01N1NT9Y6], though it’s decent given gaming isn’t the unit’s main focus.

Jetpack Joyride was fantastically smooth and Beach Buggy Racing maintained a solid framerate, even on maximum settings at 1080p.

Should You Buy the MeLE V9? 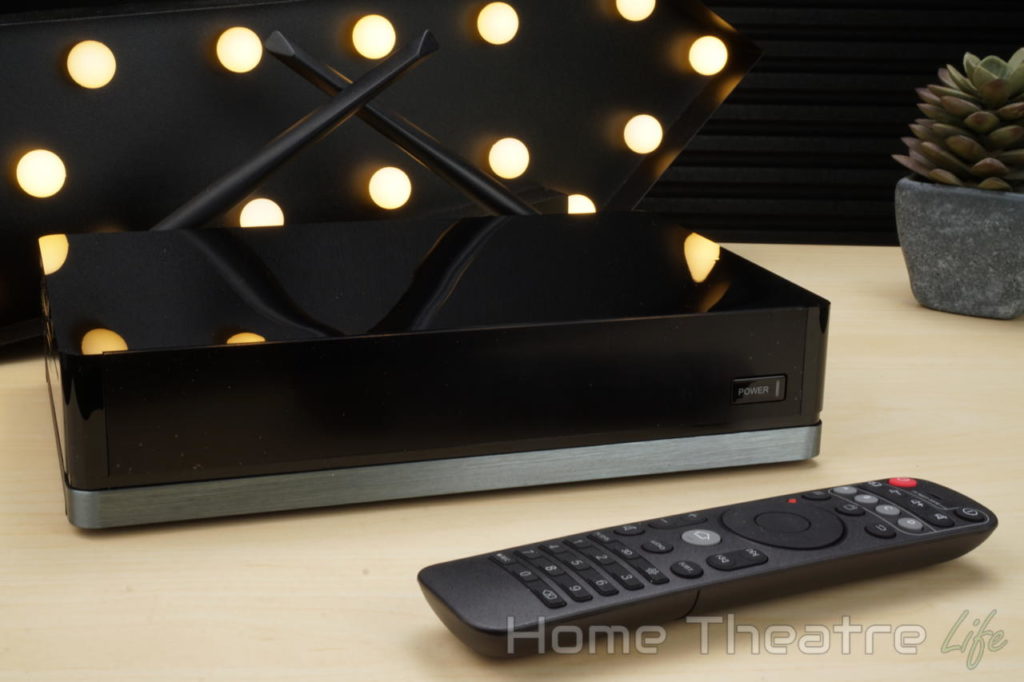 The MeLE V9 positions itself as a premium Android TV box with an impressive media playback capabilities and and a more software experience which makes the unit feel “premium”.

Video playback was solid, automatic framerate switching works as expected (though only with an external player) and the internal hard drive bay is useful for adding extra storage.

However, the lack of HD (and 4K) Netflix is a disappointing omission that will be an issue for streaming movie fans.

Ultimately, if you’re looking for an Android TV box with a hard drive bay or HDMI recording, the MeLE V9 is a great option as long as you don’t need HD Netflix.

The MeLE V9 is available from the official MeLE AliExpress store and Banggood for around $200. However, it’s on sale for $140 at AliExpress for a limited time only.

MeLE V9
The MeLE V9 is one of the better Android TV boxes with HDMI recording - and the attractive design is a plus. Whilst it's large, video playback and gaming performance are solid.
Pros
HDMI recording offers more use cases
Solid gaming performance
Internal hard drive bay is great for increasing storage
Cons
Automatic Framerate Switching limited to 24Hz content
First firmware update had to be installed manually
Large size may cause issues where space is at a premium
7.4